Undaunted Pledges are repeatable Group Dungeon quests in The Elder Scrolls Online. They are unlocked at level 45, and accessible through the Undaunted Enclave at the player's Alliance Capital. These special assignments allow the player to continue the quests from the regular dungeons, expanding and bringing them to an ultimate conclusion. You must first take the quest: Taking the Undaunted Pledge

Pledges have undergone some major changes with the release of the One Tamriel update. In the past, there were 2 Daily quests: a Normal and a Veteran, and players were rewarded Bronze, Silver or Gold Keys for their participation. Now there are 3 Daily quests, and these can be run at any difficulty. Running them on Normal rewards 1 Pledge Key. Running them on Veteran rewards 1 Pledge Key and 1 Monster Mask of that Dungeon. Running them on Veteran *hard mode* rewards 2 Pledge Keys along with the Monster Mask of the Dungeon. This means players can potentially acquire 6 Keys a day, if they run each Pledge on Veteran and get the Challenge.

*Veteran hard mode: right before the boss fight, there is usually a scroll on the ground (Scroll of Glorious Battle).... activating it will increase the difficulty.  These hard mode bosses also reward a collectible Undaunted bust of that boss for furnishing your home.

There are now 3 NPCs that give these quests instead of 2. They will give players a quest from the following pools and players can use their Pledge Keys to open one of 3 chests, granting a shoulder piece (as well as other loot) from that pool.

As of Scalebreaker DLC in August 14th 2019, the NPCs below have a "store" for players to purchase sets from. 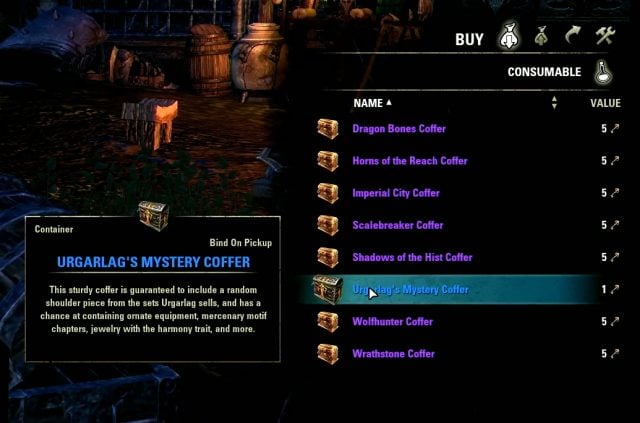 With the Scalebreaker Update, Undaunted Keys will now be located in the currency tab and no longer take up valuable inventory space. You can also now spend your keys directly via a store with the three pledge masters (Urgarlag Chief-bane, Glirion the Redbeard, Maj al-Ragath) in a number of ways which are as follows: