Moongrave Fane is a 4-player Group Dungeon in The Elder Scrolls Online (ESO), located in the Tenmar Borderlands of Northern Elswyr. It is part of the Scalebreaker DLC. It features Normal and Veteran Modes. Players can use the Group & Activity Finder tool to easily find groups to tackle this dungeon with.

Deep within the ancient ruins of Moongrave Fane, a former member of the Dragonguard and his fellow vampires of the Hollowfang Clan have felled and captured a Dragon. However, they wish to do more than simply destroy the humbled beast, as the clan prepares a ritual to drain the Dragon of its blood and gain its terrible power! 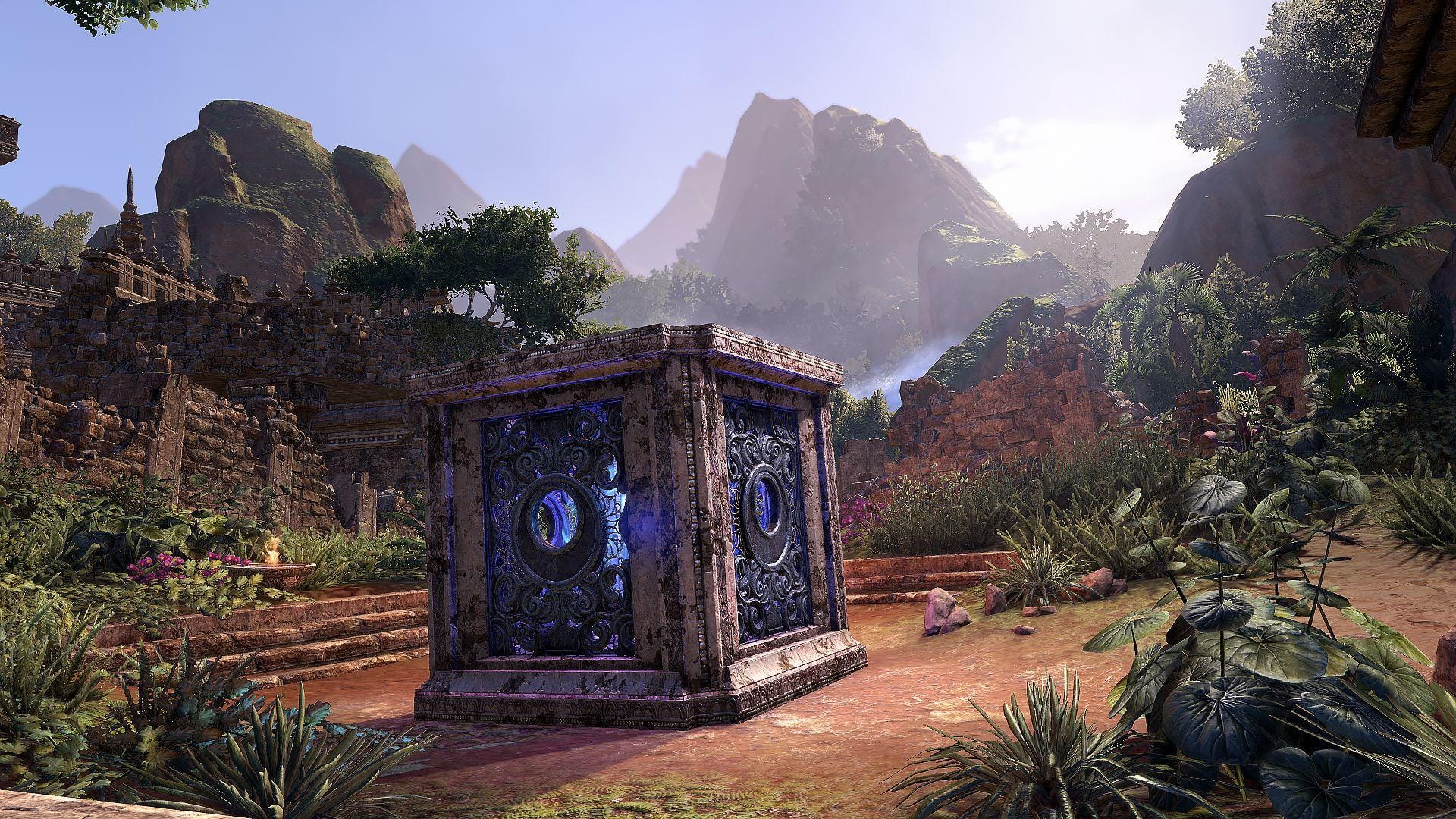 Moongrave Fane is a dungeon comprised of Ancient Khajiit ruins. The enemies consist of Khajiiti Vampires as well as various beasts. As a primarily vampire-inhabited dungeon, blood is a common theme throughout and there are two special mechanics that persist throughout the dungeon: 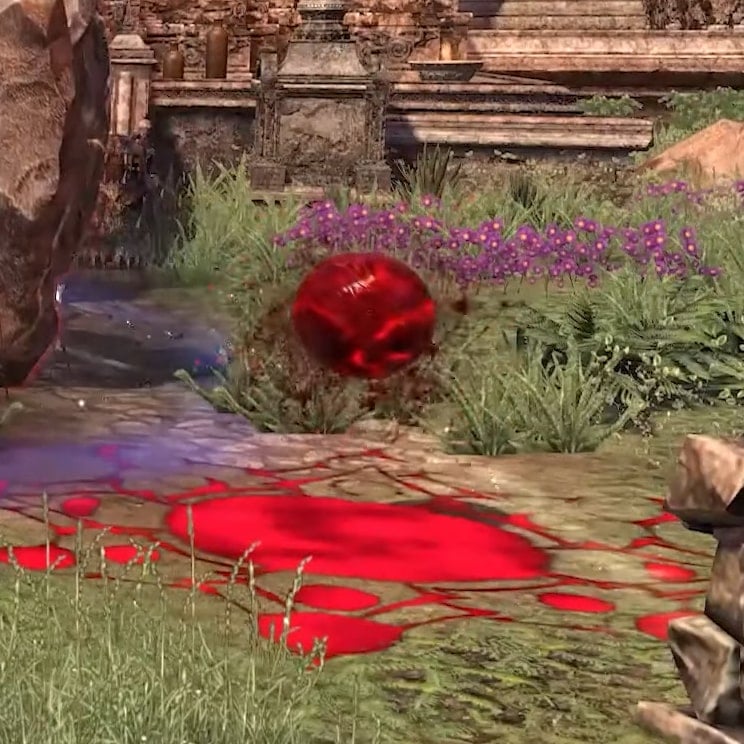 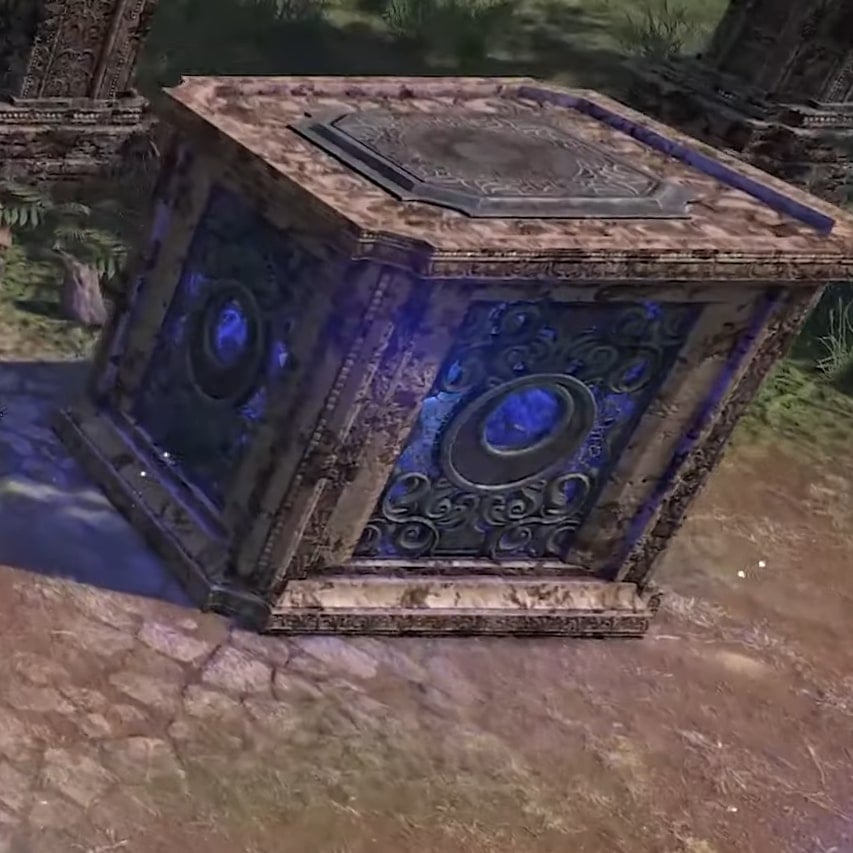 Hemo Helots are orbs of blood that have various uses throughout the dungeon. They can be summoned via the Sangiin Sacrifice synergy. You will come across several orange/yellow glyphs on the ground where you can activate the synergy either by luring and killing an enemy atop the sigil or sacrificing a portion of your health. You can launch these orbs by performing a Heavy Attack. Additionally, you can destroy them with normal attacks.

Sliding Stones are the cubical constructs found throughout the dungeon. They glow with a blue hue and can be moved around with basic attacks. These stones will need to be slid onto pressure plates in certain areas in order to unlock doors and proceed. They can easily get stuck in the terrain. However, there are circular pads in the immediate area that you can use like synergies to reset any stones that are stuck. Additionally, they can be used to block several AoE effects from enemies.

Both mechanics will come into play throughout the dungeon and will have specific uses in certain boss fights as well. 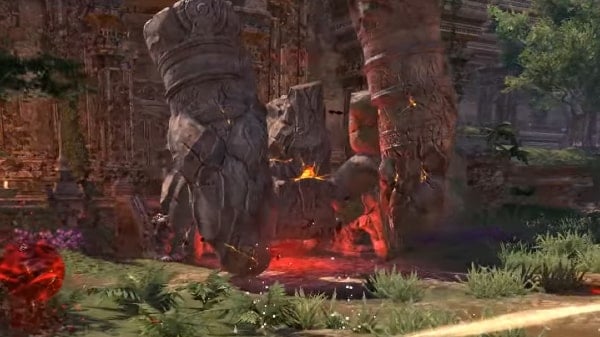 Risen Ruins is a giant Stone Atronach encountered as the first boss of Moongrave Fane. Its attacks consist of rock-based attacks, projectiles and charges. There are also plenty of adds that assist the boss during the encounter. The boss will be your first chance at using the Hemo Helot mechanic, take note of the two synergy sigils on either side of the boss. 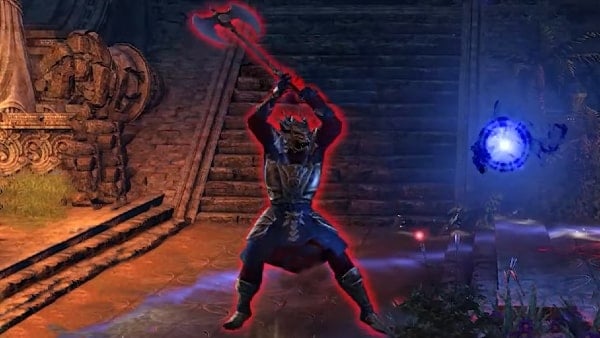 Dro'zakar is a Pahmar-raht Vampire member of the Hollowfang Clan and serves as the second boss of Moongrave Fane. He fights with a large battle axe and uses blood magic and skills. There are also several adds that spawn during the encounter, including a sacrificial add that will attempt to summon Hemo Helots from the synergy plates in the four corners of the room which the boss uses for one of his mechanics. 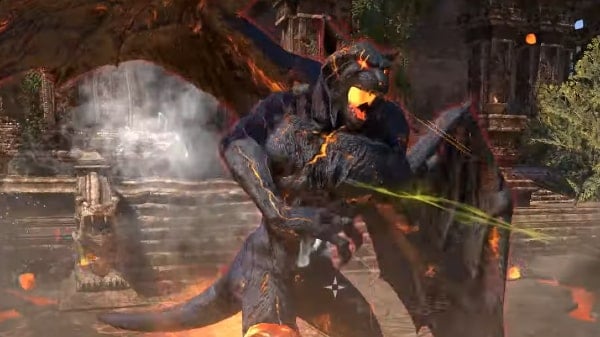 Kujo Kethba is a Khajiiti Gargoyle that serves as the third boss of Moongrave Fane. Kujo Kethba is encountered in a courtyard area where the floor is cracked in several places, exposing magma. On the sides of the courtyard are two Sliding Stones that come into play during one of the boss' mechanics. Take note that there are a large number of adds that can spawn during the encounter as well. 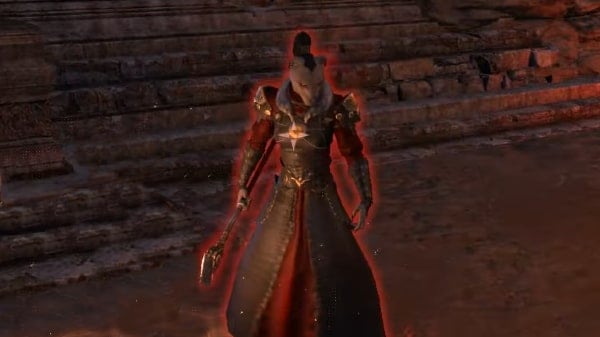 Nisaazda is the Clan Mother of the Hollowfang Clan and serves as the fourth boss fight of Moongrave Fane along with Grundwulf, the Dragonguard. She will primarily be attacking players from afar and summoning blood creatures while Grundwulf harasses players from melee range. 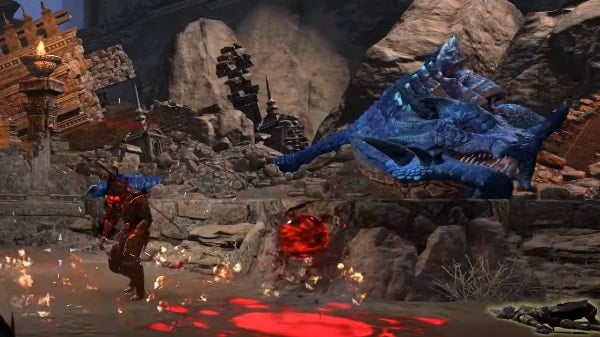 Grundwulf survives the previous encounter and retreats deeper into the ruins. The next time you see him, he will be next to a chained up dragon and performing a ritual to drain the dragon of its blood. This empowers him for the final encounter.

The first time you do this encounter in a given run, you will have to first defeat several waves of trash mobs while Grundwulf completes the ritual. These adds will comprise of Coagulants, several types of Hollow Fang Clan members, as well as Moongrave Sentinels. Note that if you wipe in the main boss fight, you will not have to repeat this add gauntlet. After defeating all adds, Grundwulf will move down into the main room floor. There will be a special Hemo orb to the left of the entrance that you can use to activate Hard Mode for the boss encounter.

Activating Hard Mode not only gives the boss more than double health, but also makes his attacks hit harder. In addition, the following mechanics are modified/added: 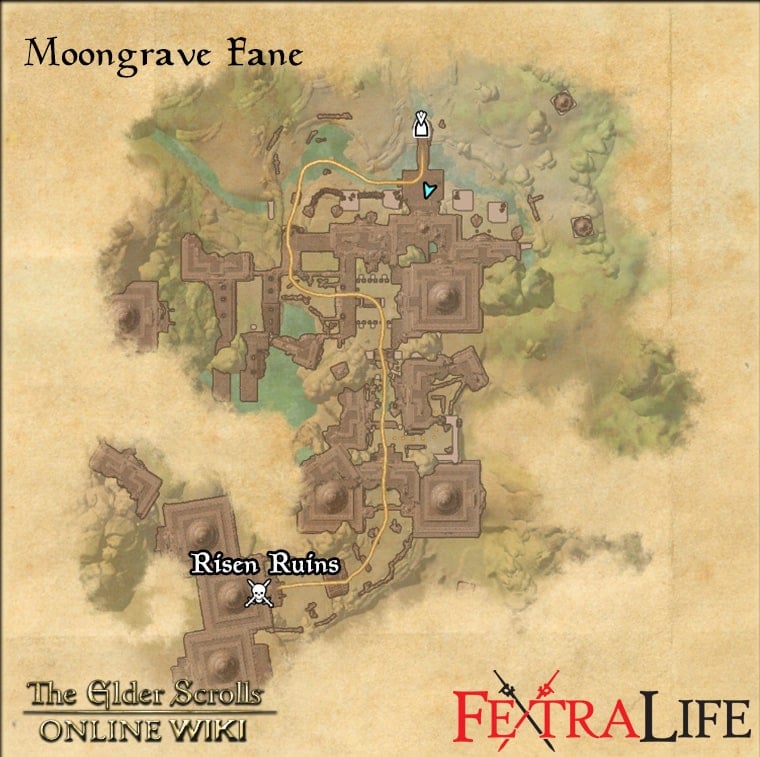 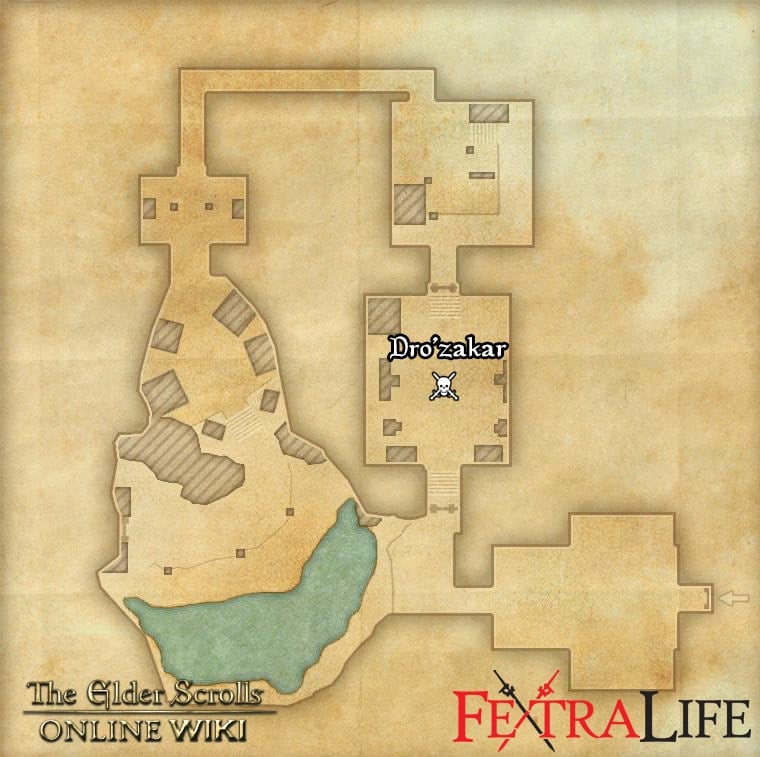 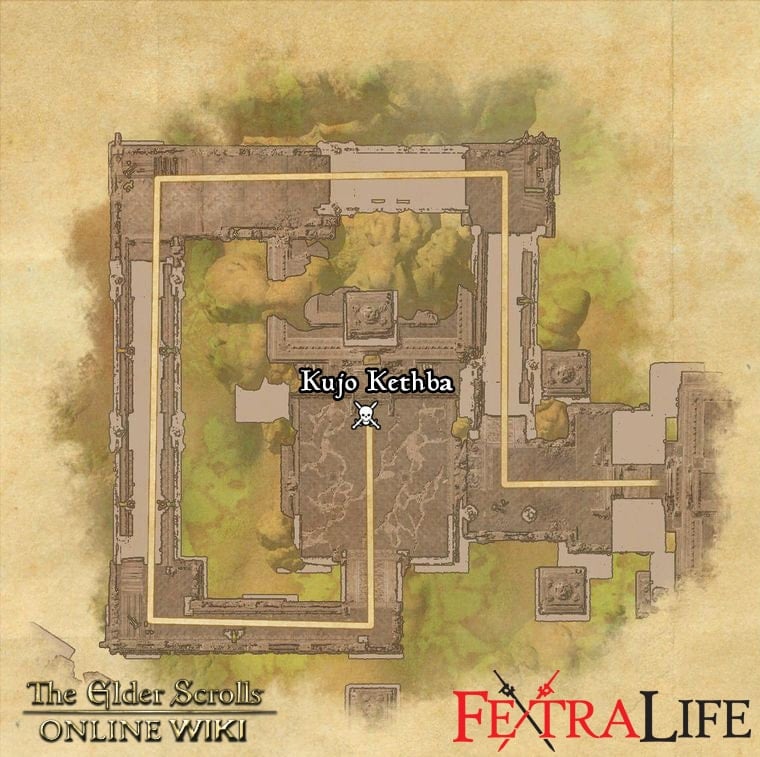 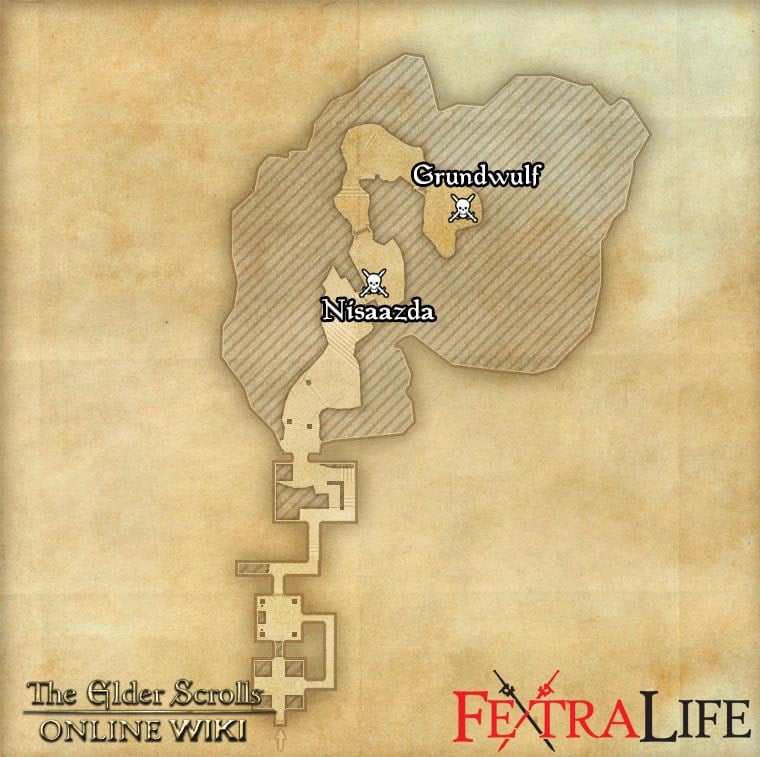