Mundus Stones in Elder Scrolls Online (ESO). ESO Mundus Stones grant the player a permanent buff when used (similar to that of Standing Stones from Skyrim). They use the Constellations of the Elder Scrolls universe to determine their buff. The player can interact with any Mundus Stone at any time to obtain its buff, but only one Mundus Stone Buff may be active at any one time (unless the player is wearing 5 or more pieces of the Twice-Born Star Set). The effects and locations of each stone are listed below. The Cyrodiil map is located at the bottom. 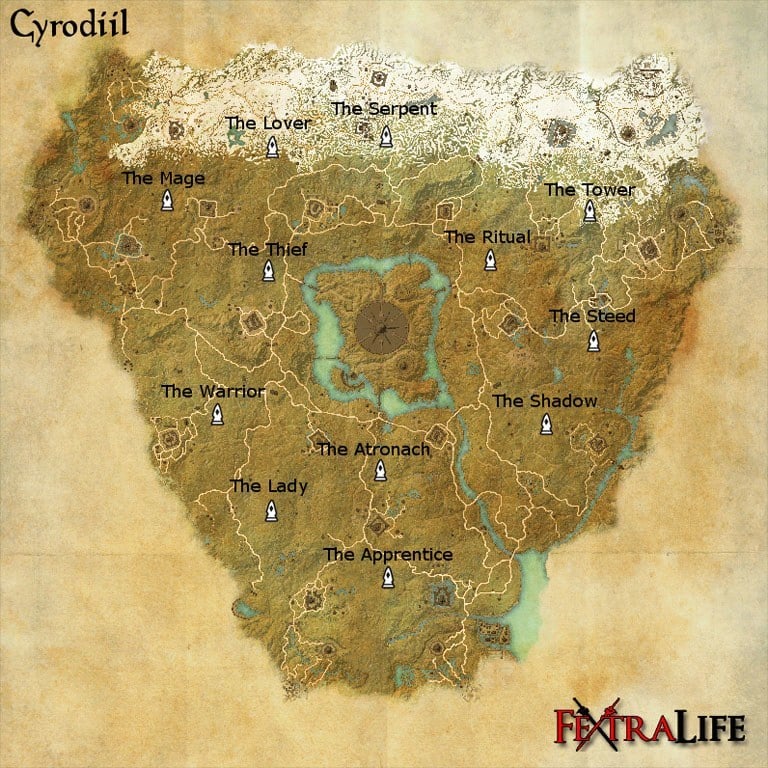 (From the official site here )

Mysteries of the Mundus Stones

By Lady Cinnabar of Taneth

The influence of Aetherius, the plane of magicka and spirits, upon Nirn is unquestionable. It filters through the veil of Oblivion from laminar (and luminar) perforations left by the architect Magnus and the Magna-Ge as they fled Mundus, bringing light and magic to mortals. The motivations for their flight aside (and before I digress into Dawn Era origination theories and thought experiments about a Nirn completely separated from Aetherius), the stars, their power, and their arrangements have long been subjects of intense study and even worship in some cultures.

The Ayleids are commonly associated with the practice of Aetherial magic. You can learn more about their creations in my work Aetherial Fragments, but suffice it to say they were able to manipulate and store starlight in ways we have yet to fully comprehend. The Nedic people also had an interest in the stars, though their culture was focused on theology over magical study. However, there is evidence that the highest echelons of Nedic priesthood preserved ancient rituals that invoked Aetherial magic. If what remains of their ponderous, flowery, and excruciating-to-translate poetry is any indication, they had a particular fascination with the constellations and their aspects.

The constellations each occupy their own magical domains, as evidenced by the observable energies that emanate from Mundus Stones and their ability to instill power into individuals. We do not know who erected these stones (which can be found across all the provinces of Tamriel) or for what purpose, but their magical resonance tells us clearly that each constellation’s signature is quite unique. This raises questions: were the individual constellations deliberately formed the Magna-Ge, imparting their essence into the trans-constellatory light? Is each constellation a window into a different Aetherial realm, such as Sovngarde or the Far Shores?

My own careful examination of several of the stones in the Alik’r Desert, which nearly exhausted my limited funding, revealed a curious phenomenon. Everyone knows that the guardian constellations— the Mage, Thief, and Warrior—are said to protect the other constellations from the destructive chaos of the Serpent, but my research may have exposed part of the magical underpinning of this legend. A survey of the Warrior stone uncovered strong Aetherial currents traveling from the stars into the stone and radiating outward, implying a cross-Tamrielic web. Why no other scholar or mage has commented on this, I cannot say. Mundus Stones are poorly studied, and it is possible that this energy is not always active.

I theorize that there are other, related stones, as yet undiscovered, that further focus the power of the constellations. Could these magical pathways be manipulated—or, even more interestingly, reversed—to create a kind of Aetherial feedback? What would this permit us to achieve, and what would it teach us of the very nature of the relationship between Mundus and Aetherius?

I fear that my work in this area has introduced more questions than it has answers, but you are undoubtedly as thrilled as I am by the implications of this research. Sadly, I have experienced difficulty in procuring additional funding for this project, and I am searching for new sponsors. I hope to pursue this intriguing discovery further as soon as possible.

Lady Cinnabar says: “The et’Ada are the ‘original spirits’ whose existence predates creation of the Mundus. Those with a more Anuic, or orderly, valence became the Aedra, who sacrificed themselves to give birth to the mortal arena. Those with a more Padomaic, or chaotic, valence, became the Daedra, who inhabit the metamorphic realms of Oblivion, and the Magna-Ge, who left both Mundus and Oblivion, but are said to be capable of visitation. To encompass or number the et’Ada is a futile endeavor, for they are beyond mortal comprehension, and our perceptions of these beings are but faulty shadows of their complex reality. Many a savant has been driven mad by the attempt.”

Lady Cinnabar says, “We count on you, O Darkweaver, to prove worthy of your name in unraveling the dark enigma of the Celestials. Steel yourself, then, to face the perils of Craglorn, and wrest from the Celestials the secret of their origins. Please send your findings to Lady Cinnabar, Tower of the Fifth Doctrine, Taneth, Hammerfell, and I will turn them into literature that will astound all Tamriel. And may Onsi’s bright blade guide you.”

By Lady Cinnabar of Taneth

Many novice students find the study of the planes difficult to approach. Unlike my contemporary, Phrastus of Elinhir, who alienates readers with his self-serving agenda, I find that starting with an unbiased, concrete example works best as an introduction. Studying Aetherial fragments naturally leads to the broader topic of the planes.

Surely you have seen a shooting star. This occurs when a piece of Aetherius, spirit-plane and source of magic, becomes dislodged and falls to Nirn. Two types of materials, meteoric iron and glass, may be found after such an event. The magical potential of both is extraordinary. In this text, I focus on the rarer meteoric glass, including its uses through history and its various manifestations.

The Ayleids, the Elves that ruled Cyrodiil until the early First Era, made extensive use of these sky-stones. With their advanced understanding of the magical arts, they created blue Welkynd and Varla Stones to harness the power of starlight from Aetherius and store magicka, power enchanted items, or provide unending light. Some even held Destruction spells as a type of automated defense.

The secrets of producing these stellar vessels have been lost. The Ayleids were able to create them in considerable numbers by replicating and enchanting meteoric glass. Attempts to synthesize new Welkynd or Varla Stones, or even to reproduce uncharged meteoric glass, have failed. Frequently, the original stones crumble to useless dust upon experimentation, further frustrating research and necessitating dangerous expeditions into Ayleid ruins.

The modern Malondo and Culanda stones, golden in color, are similar to blue Ayleid fragments. A product or discovery of the High Elves, they are most frequently found in the Summerset Isles. Malondo Stones, which can be recharged, can be tapped by spellcasters as a source of magicka replenishment or to restore a charge or charges to enchanted items. Culanda Stones provide a bright golden light. They can trigger magical effects or store magicka, but are always destroyed upon use or depletion.

You may read claims by Phrastus, who is blindly enamored of Elven culture, that the Altmer have unlocked and improved upon the secrets of the Ayleids. He even suggests that they are cultivating Malondo and Culanda Stones as a farmer might grow wheat. The more reasonable theory is that, through tinkering with existing Ayleid stones and raw meteoric glass, a more reliable method of recharging has been discovered.

Sky Prisms, another type of Aetherial fragment, can be seen splitting into shards as they fall to Nirn during specific lunar alignments. When three shards meet, they re-form into a silvery prism by some unknown process and confer the power unlocked by the merger to a nearby being. Like other sky-stones, they are relatively rare, and it is difficult to obtain specimens for investigation. Though they originate in the heavens they are often found underground, brought there by denizens of the depths who find their light-emitting properties useful.

With enough study and experimentation, it is my hope that the keys to producing these useful items will be uncovered, and a more full understanding of the planes and their power will be achieved.