The Armory in Elder Scrolls Online (ESO) is a feature that allows players to easily switch between different Builds. Players can save any of their custom character builds in the Armory, logging their equipped Gear, Attribute, Abilities and Champion Points allocations and more. Players can then switch between these builds in an instant, saving time and effort and allowing them to return to activities much quicker. This page covers information on the Armory, its usage, related features and more.

An Armory Build Has:

The Armory is a major quality of life update that gives players a very accessible and easy method to manage their Custom Character Builds. At the press of a button, players can seamlessly switch between any of their saved build loadouts and at no extra cost. The Armory will save almost all custom character features including Skills, Champion Points, Equipped Gear and many more, saving the players from going through the arduous process of respeccing every single time.

The Armory is a free update to the Base Game, accessible to all players and does not require ownership of any DLC. 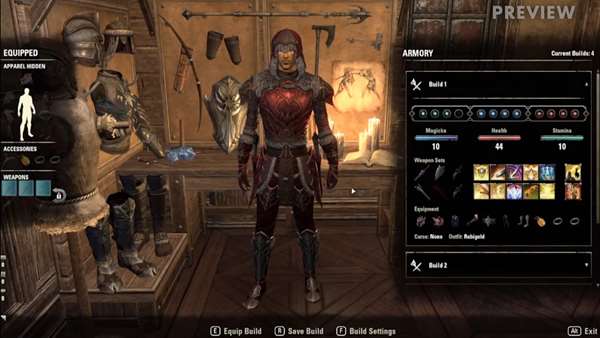 The Armory only has one prerequisite for access: Players will need to have access to a home. New players can check out the Player Housing page for details.

In order to access the Armory, players will need to place the Armory Station in their home. This is a Furnishing item that can be acquired in the Crown Store for free. Once placed in a home, the station can be interacted with to activate the Armory UI.

Alternatively, players can also access the Armory via the new Armory Assistant Ghrasharog, which requires a separate purchase at the Crown Store. Once purchased, Ghrasharog can be summoned almost anywhere in the game, with certain limitations. This allows players the freedom to switch between builds on the go. When summoned, Ghrasharog can be used by any players within the same party.

Ghrasharog cannot be summoned in certain locations such as within Trials and PVP Zones such as Cyrodiil.

How to use the Armory?

Within the Armory UI is a template for a number of build loadouts. Using the Armory is as simple as equipping all your desired gear and character configurations, and then hitting Save Build. Once your build is saved, the template will reflect all of your settings for a quick overview.

Note that you will still need to manually respec using the Rededication Shrines for Attributes and Skill Points and the Champion Point Interface for Champion Points if you wish to set up separate builds, incurring all the standard costs associated with these resets. However, once your builds have been saved, you can freely switch between them at zero cost.

Using the Build Settings option, you can rename your builds and assign icons to them to more easily distinguish between your different builds.

Similarly, when switching to a saved build, simply select the build and hit Equip Build. 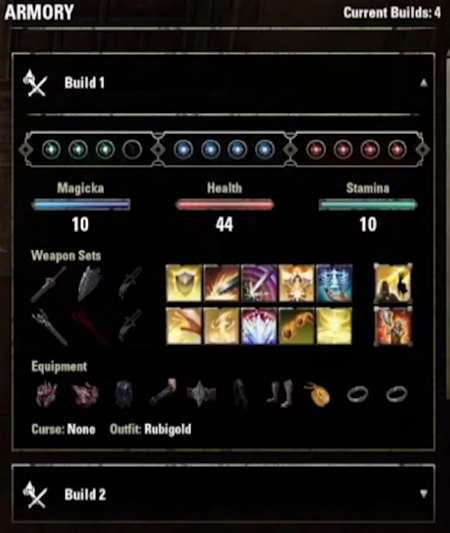 What can be saved in the Armory?

In the context of the Armory, a "Build" consists of the following:

Note that Mundus Stones are currently not supported by the Armory and will need to be set up manually when changing builds.

Important: When loading builds from the Armory, any equipment (Weapons, Armor, Jewelry) included in the loadout must be in your inventory. The Armory does not currently account for extra storage such as Bank Slots but this may change in the future. In the event that an item is not found in your inventory, the rest of the loadout will still be equipped but the missing slots will be marked red in the Armory UI.

How many builds can be saved in the Armory?

The Armory can host a total of 10 Build Loadouts.

Each Character will start off with 2 Build Slots for free. Players can purchase more slots via the Crown Store.

Note that Build Slots purchases are on a per-Character basis so you will need to purchase additional slots for other characters if you wish to have more builds available to switch between.