March of Sacrifices is a 4-player group dungeon located at a Hircine statue southwest of Serpent's Grotto in Greenshade in The Elder Scrolls Online. It is part of the Wolfhunter DLC. It features Normal and Veteran Modes. Players can use the Group & Activity Finder tool to easily find groups to tackle this dungeon with.

This is a challenging dungeon in Veteran modes. Players should form a well-geared party at the endgame level.

"In March of Sacrifices, you and your team must escape Hircine's Hunting Grounds, a place of perpetual conflict between predator and prey, by participating in his dangerous game. Your target: A powerful Indrik. Your rewards: A boon from the Daedric Prince himself!

However, you are not the only hunters competing to win Hircine's favor, and you'll quickly discover that many have been invited to participate. Be warned: As you stalk and fight your way through this extraordinary Daedric realm, you might find that you yourselves are the ones hunted!"

You will also encounter challenging enemies:

There are three sisters here, each has their own aura so keep them apart so they don't get each other's buff.

Tank: Taunt the Ursus and keep her away from her sisters.

DPS: Focus the Healer and once it's dead, then DPS split between Ursus and Strigidae.

Healer: Stay near the center to heal everyone.

This boss has four mini Spriggans around it, each has different AOE's attached to them. (in different colors: Green, Blue (Slow), Orange and Red (Damage))

Lurchers of the same color will spawn during the fight, when one of the Lurchers dies,  it'll drop a glowing light of their color on the ground that needs to be picked up with the Synergy button.

Each player will need to pick up their own color. When the boss will start channeling ability, players must stand in the circle matching the color they picked up.

Tank: Tank needs to taunt the boss and all Lurchers so that they all can be cleaved down. Do not forget to pick up a synergy when a Lurcher dies.

DPS: Cleave down Lurchers and focus boss. Focus the Lurchers if DPS is on the lower side.

Healer: Get out heals when the group splits to the different AOE's.

This boss has different elemental attacks like fire, ice, and lightning. Occasionally the boss will raise the sword and channeling AOEs. Fire AoE will spread out from the boss and bounce off of walls; ice will spawn under players and lightning will hit players periodically.

Every minute the boss leaps into the air and channeling 4 elemental attacks on each player. Block or dodge the attack otherwise, you will be killed, especially DPS. At different health percentages more adds will spawn, they have elemental attacks as well.

Tank:  Focus on boss, not the adds since they can't be chained.

DPS: Focus on adds until the boss' HP drops to 15%. When boss leaps keep a distance so you have enough time to dodge.

Healer: Stay in the center to heal the whole group.

Hunting Phase: The area is covered by heavy fog, and if you are not in stealth you will be punished by teleport into air and fall. Every time you're teleported into the air during a single phase, the higher you will drop from until the third time you will be killed. (Do not attempt to resurrect a player because it will reveal you. ) This phase also occurs at health percentages of 80%, 55%, and 20%. Immediately enter sneak and spread out to the four cardinal directions of the room when notification of the Hunt beginning. Keep an eye on your stamina. Vampire is recommended for the stealth movement buff.

With each progressing Hunting Phase, there will be more attacks that may pull you out of stealth. Spread out when AoEs are coming, send one player to the-wisp.

Tank: Turn boss whenever possible, and watch out for the lightning prance.

DPS: Focus on adds when they spawn.

Healer: Do not attempt to heal while in a Hunting Phase as this will get you revealed. If you have long-lasting heal over time abilities, refresh them right before the Hunting Phase beings.

The area consists of three islands, the boss has different elemental attacks, like poisonous spores and a lightning attack. After the poison AOE move out of the water to dodge the lightning attack.

When the boss drops to low HP the arena will be covered in darkness and fog. The boss will throw an AOE on one player and chase him/her. You need to pull the boss THROUGH the blue pillar of light. All group members need to get to that pillar of light as well so when the boss is broken out of the darkness, tank can take immediate control.

Some wolves will spawn during the darkness phase. The longer the dark phase lasts, the more wolves that spawn. These wolves stay when the darkness phase is over, you need to be careful of them when searching the pillar of light.

DPS: Kill the spawns if possible during the dark phase. 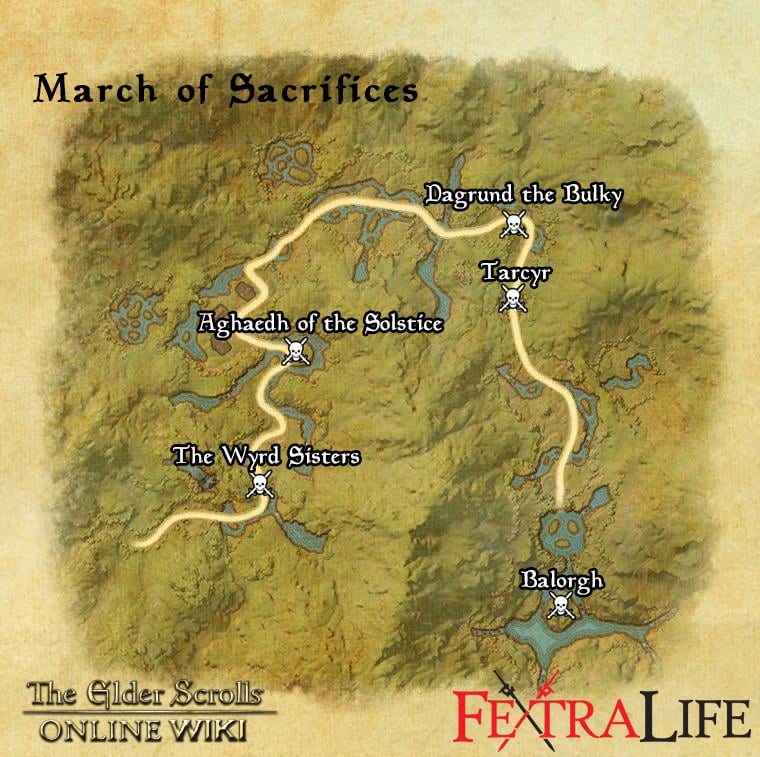