Daggerfall Style is a craftable armor and weapon style in Elder Scrolls Online. This Style is divided into several motif book chapters: one for each weapon type and one for each armor piece.

Where to get Daggerfall Motif

Chapters are found in Imperial City Vendors and from Cyrodiil's Daggerfall Covenant players. 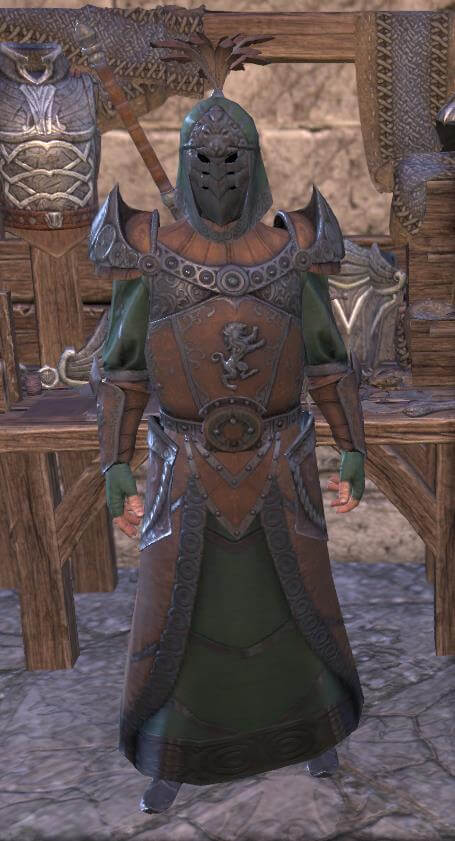 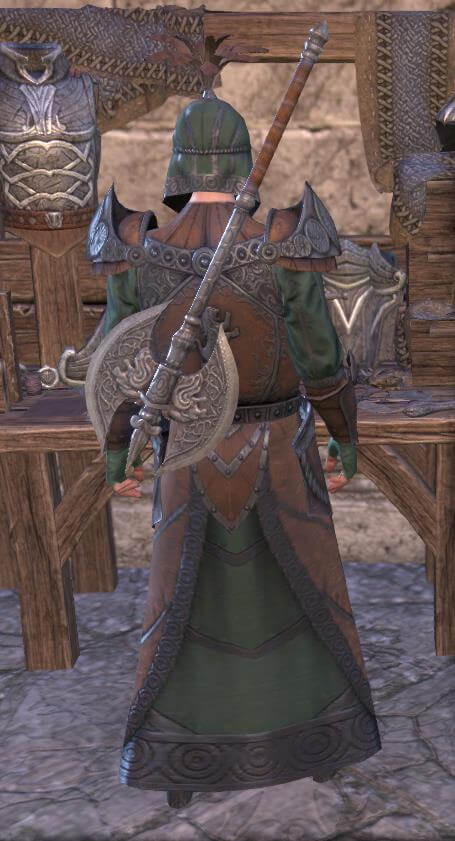 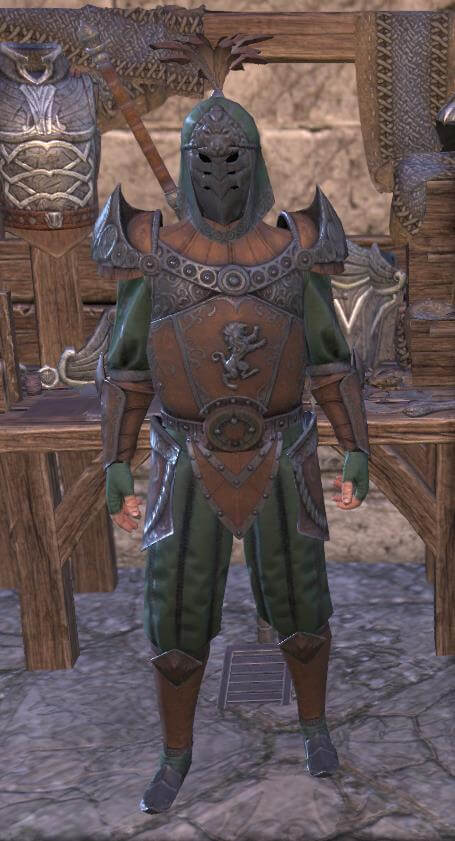 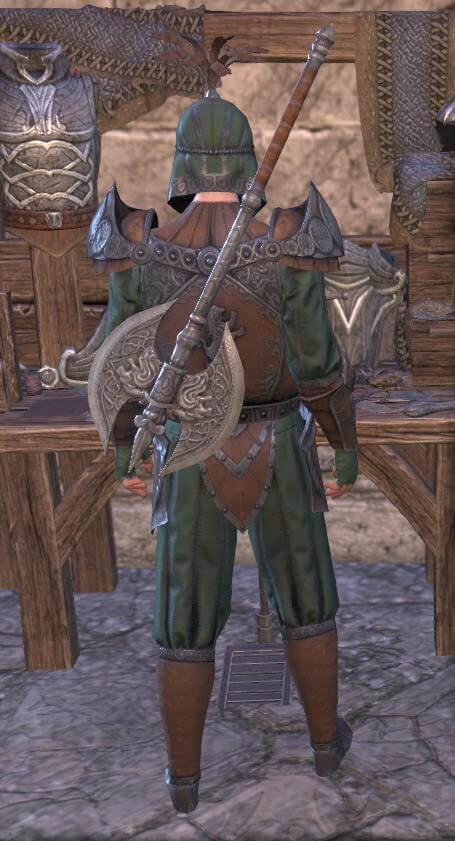 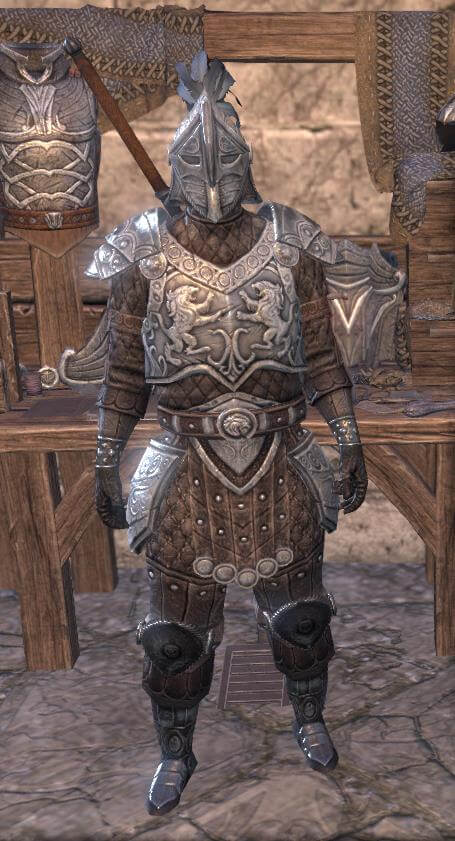 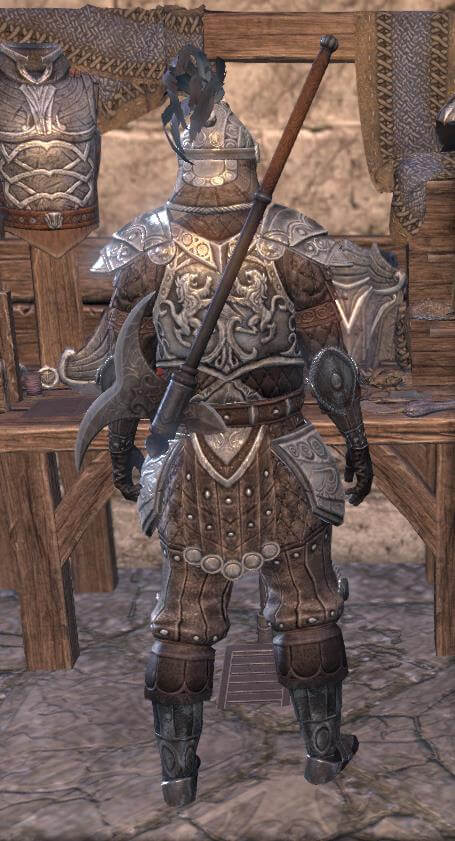 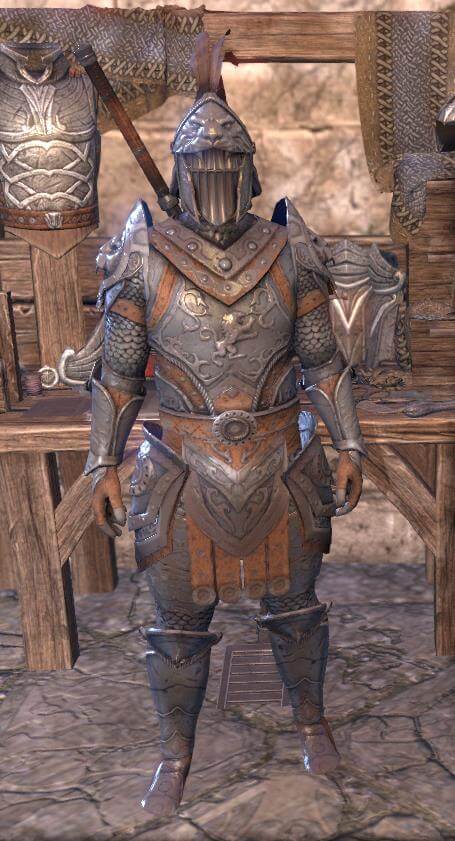 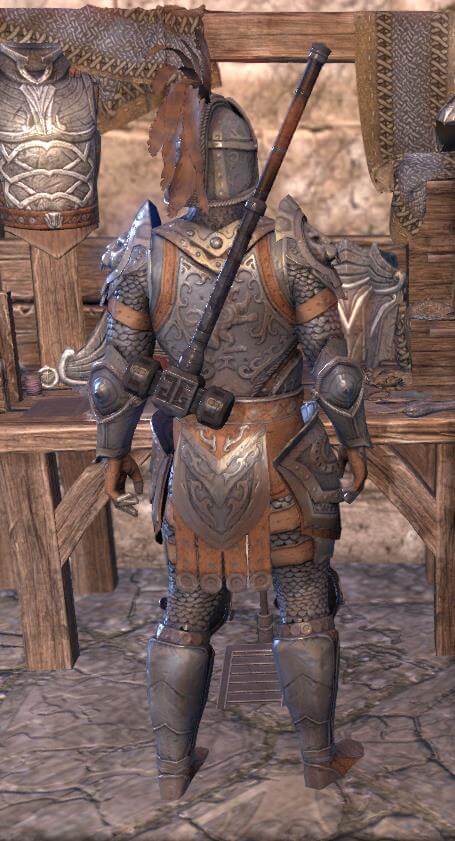 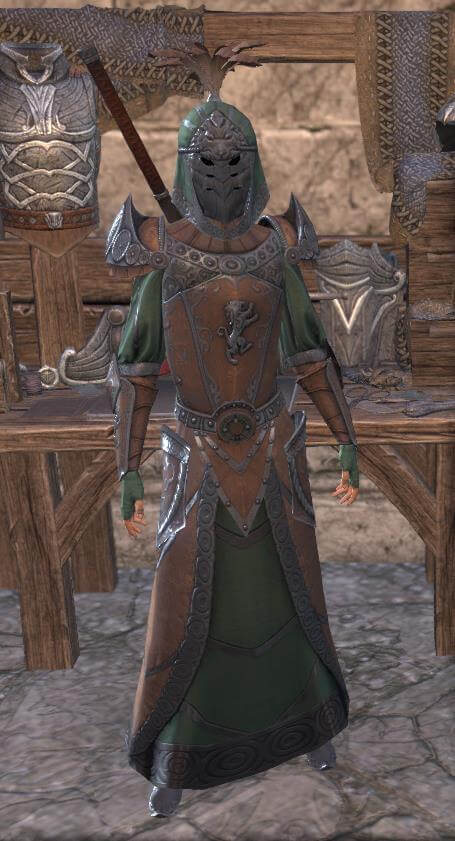 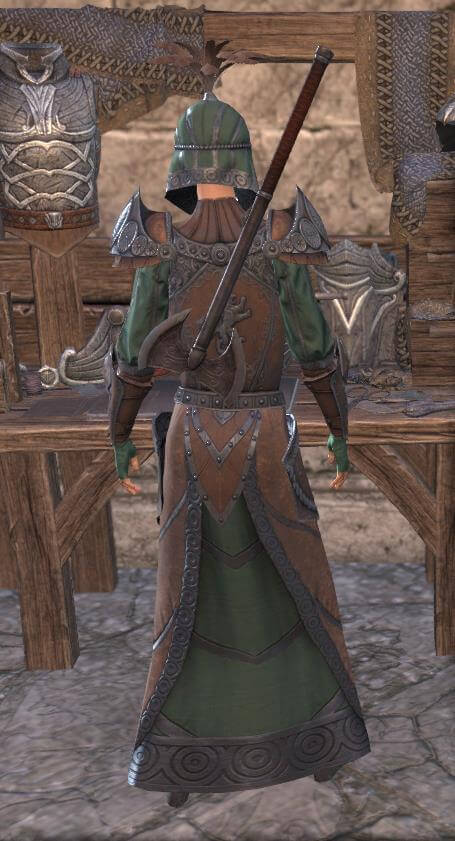 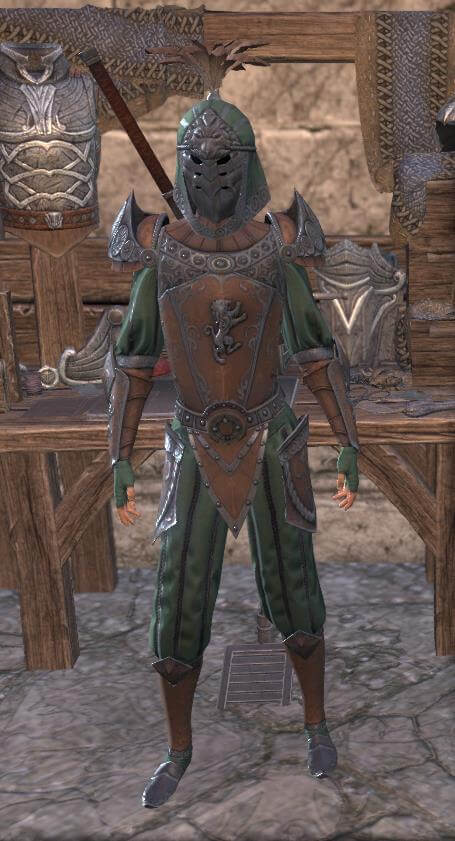 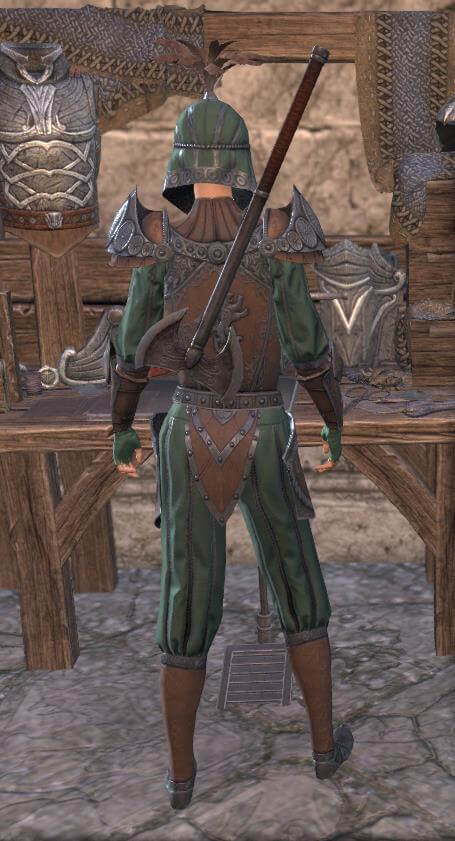 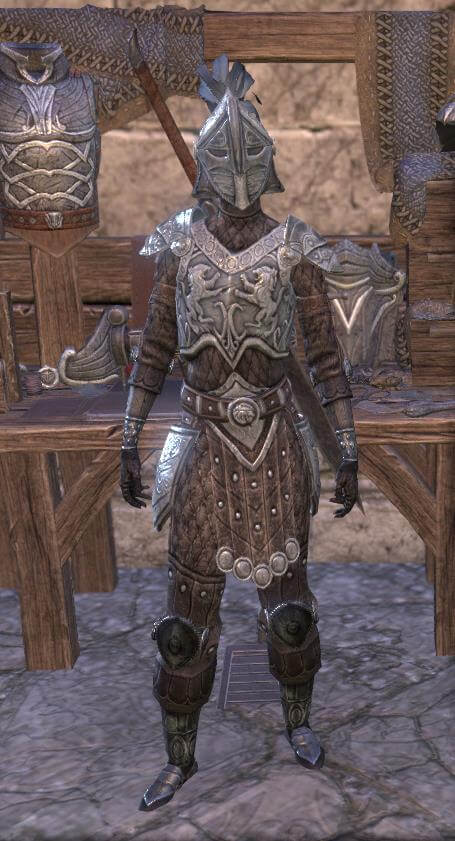 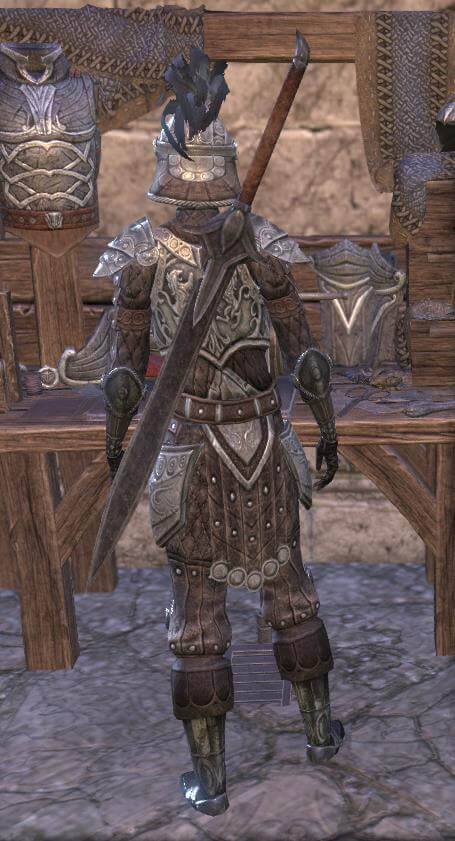 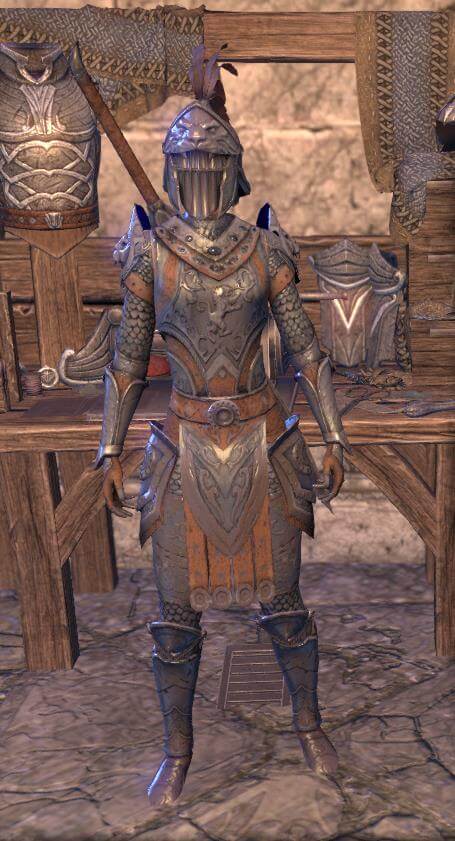 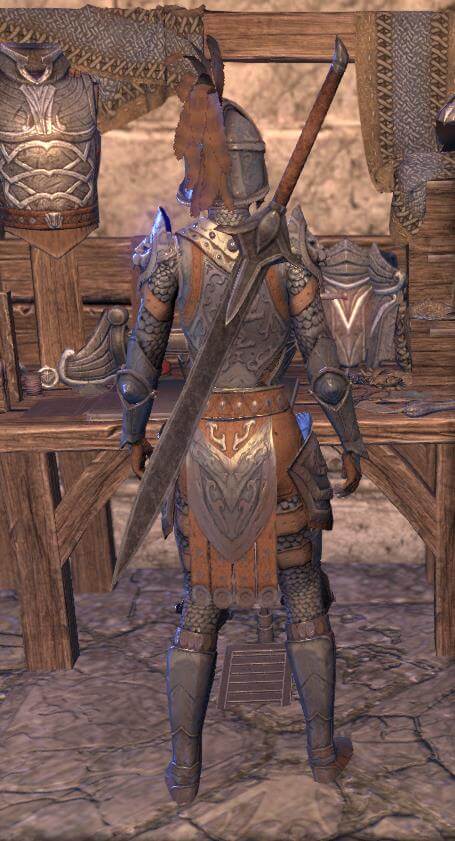 Yes, we based the Daggerfall Covenant arms and armor on classic Second Empire designs, and we're unapologetic about it. In fact, we're proud! The Covenant represents the continuing ideals of Reman's Imperium, the uncontested height of Tamrielic civilization, when everyone, even the Orcs, were included in history's greatest confederation. Insofar as we seek to restore those lost glories, we deliberately hark back to them in our designs and symbolism.

Our axes are adorned with the lion rampant of the Daggerfall Covenant, so our enemies feel the lion's bite with every swing! Solid, sturdy, sharp, and heavy—we learned that from the Orcs. Yes, we can even teach the Imperials a trick or two.

The Covenant belt is strong and solid, made of square links but fronted with a round buckle. The buckle's abstract design is meant to represent the entire world of Nirn, of which Tamriel is the center. It stands for a Tamriel reunited under the Remanic ideals exemplified by our king, Emeric.

Steel sabatons, simple and utilitarian: the warriors of the Covenant are shod with the boots they need for the long march to Cyrodiil—and beyond. Our knights may ride sturdy mounts, but in battle they mostly dismount and fight on foot, alongside the infantry and archers.

The Covenant bow gives our lions' claws a fearsomely long reach! In the Daggerfall Covenant, we choose our archers for strength, the muscles needed to draw a bow powerful enough to drive an arrow through the thickest armor.

The cuirasses of Daggerfall Covenant troops are unabashedly Imperial in design and outline, but unmistakably Covenant in adornment, with the lion rampant prominent on the chest. King Emeric chose well when he selected that as they symbol of our alliance!

Our Covenant daggers, wide yet pointed for thrusting, are definitely based on the short stabbing swords of the Second Empire's Imperial Legions. If it was good enough for the soldiers who followed Emperor Reman, it's good enough for us!

Though the Reman Imperials wore only braces for hand and forearm protection, in the Covenant forces we feel the need for a bit more protection in modern melee warfare. We keep the hands relatively unencumbered, but have added strong upper gauntlets for forearm defense.

Our chest pieces may be based on Imperial designs, but when it comes to helmets the Covenant draws its inspiration from the armor of High Rock's knightly orders. We go for a full helm, complete with visor, and an aventail to protect the neck.

Covenant greaves are plain but thick and rigid, for maximum protection of the troops' vulnerable lower legs. The design draws from both Breton knightly armor and Orcish forge-wear.

Daggerfall Covenant maces are standardized on a heavy round head with spikes on all sides. This is a time-honored and eminently practical Orcish design: when your bludgeon is the same no matter how you hold it, you never have to wonder in the heat of combat if you've got the head facing the right way.

Covenant soldiers march into battle protected by kite-shaped shields embossed with the proud symbol of the lion rampant, the seal of our alliance personally selected by our monarch, His Majesty King Emeric! Forward, the Daggers!

Covenant shoulder cops are derived from the practical pauldrons typical to the armor worn by Breton knightly orders. Sometimes we ornament them with snarling lion faces as a reminder that we are fierce and mighty.

When it comes to magic, it's the Bretons who are the most naturally talented of the Covenant allies, and the High Rock spellcasters are proud to wield staves tipped with the lion rampant of Emeric, our High King. Thew wrought-metal lion typically rears atop a facet-cut focusing crystal of some sort.

Daggerfall Covenant troops are armed with swords that harken back to those of the Second Empire: broad, straight blades edged on both sides, designed for both slashing and thrusting, with a strong crossguard above the hilt to enable vigorous parrying in the heat of melee.