Ebonheart Style is an armor and weapon style in Elder Scrolls Online. This Style is divided into several motif book chapters: one for each weapon type and one for each armor piece.

Where to get Ebonheart Motif

Chapters are found from Imperial City Vendors and chest. 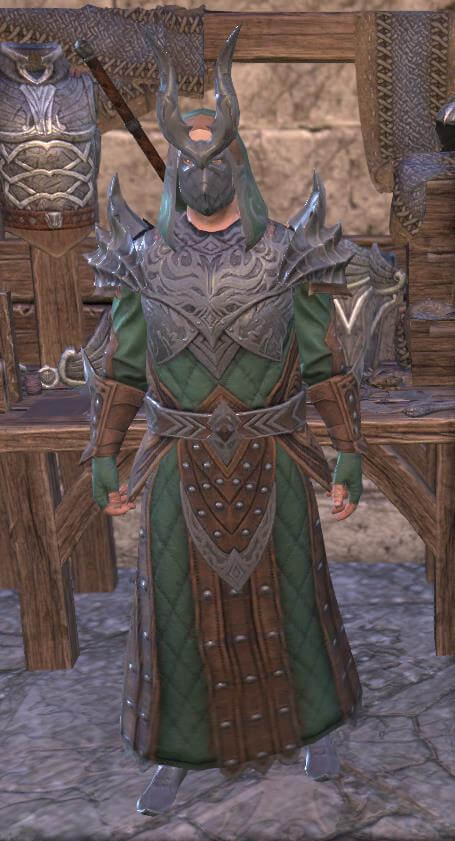 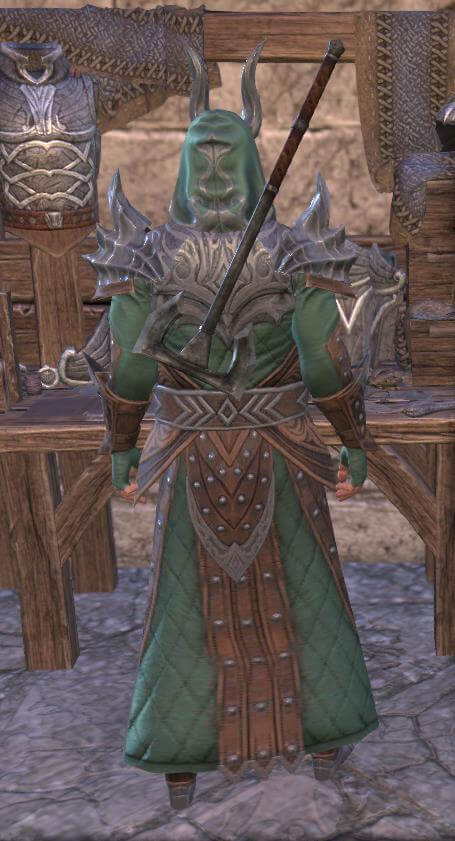 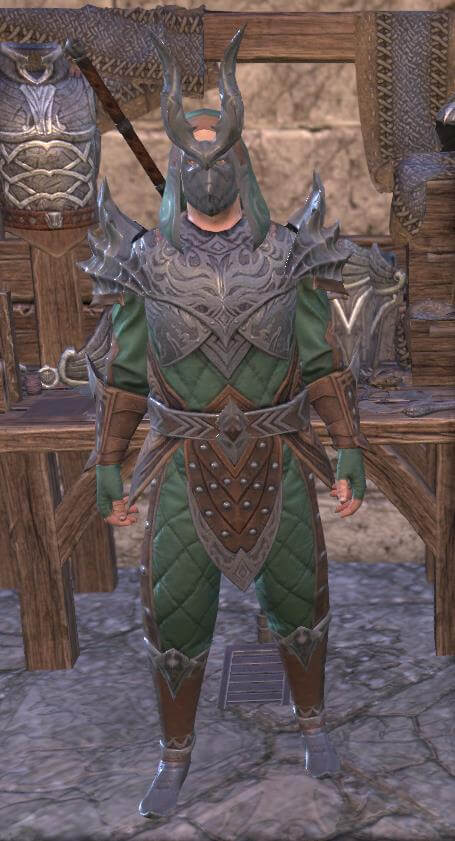 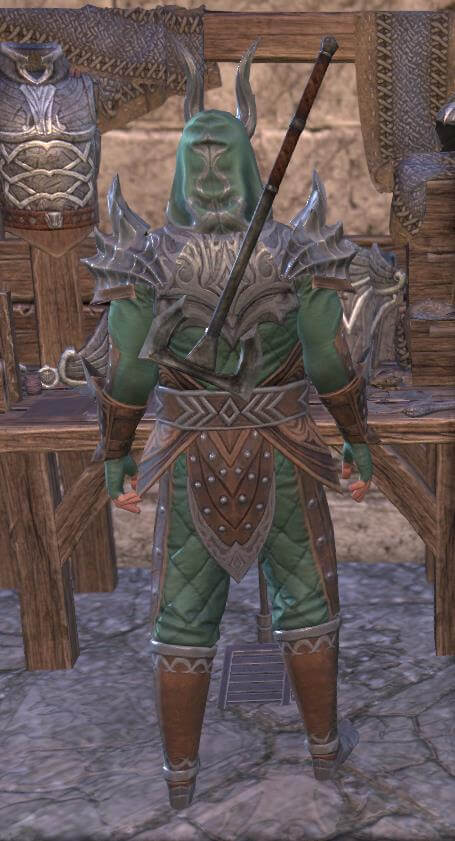 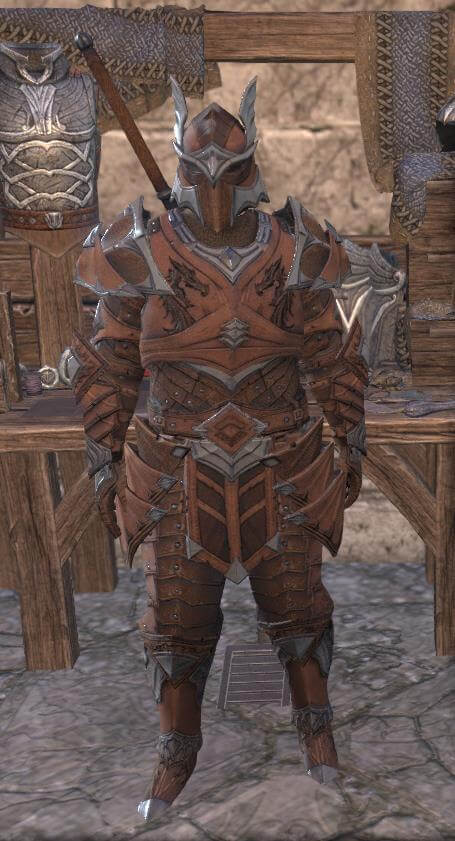 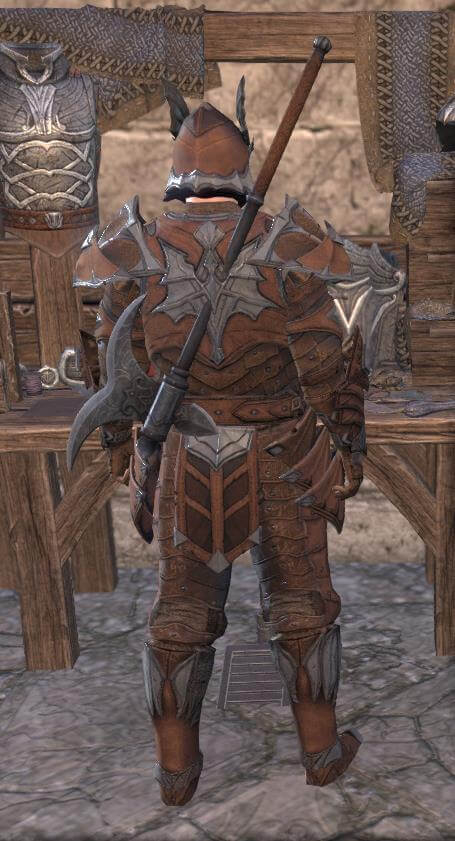 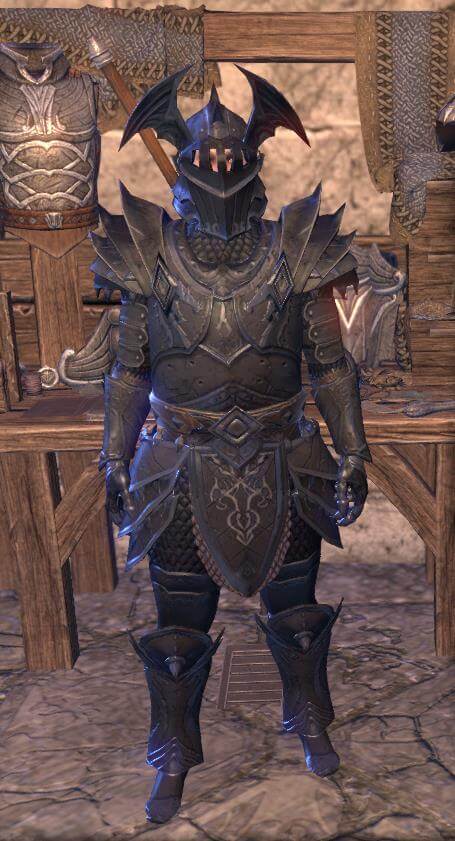 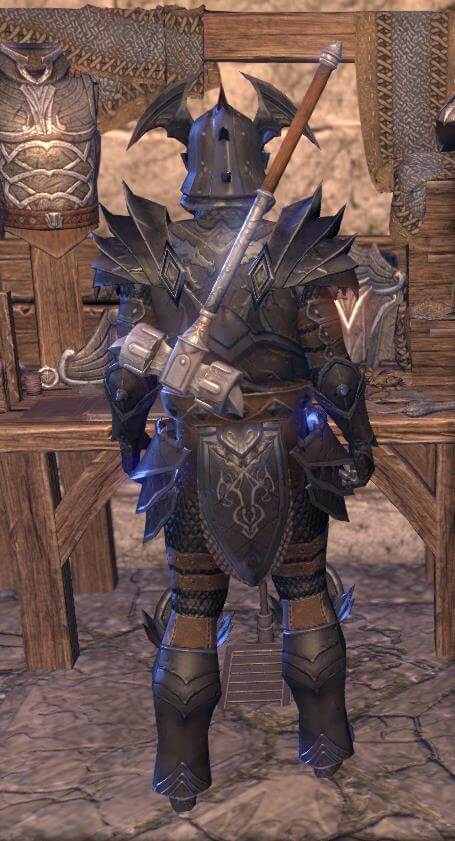 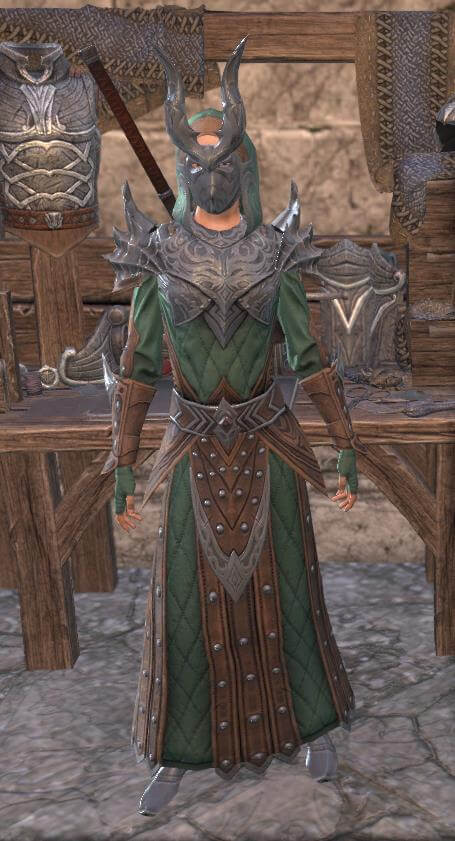 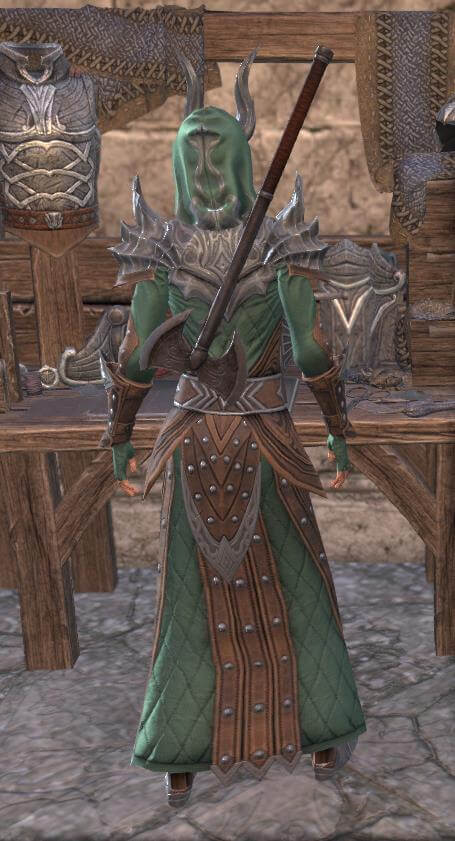 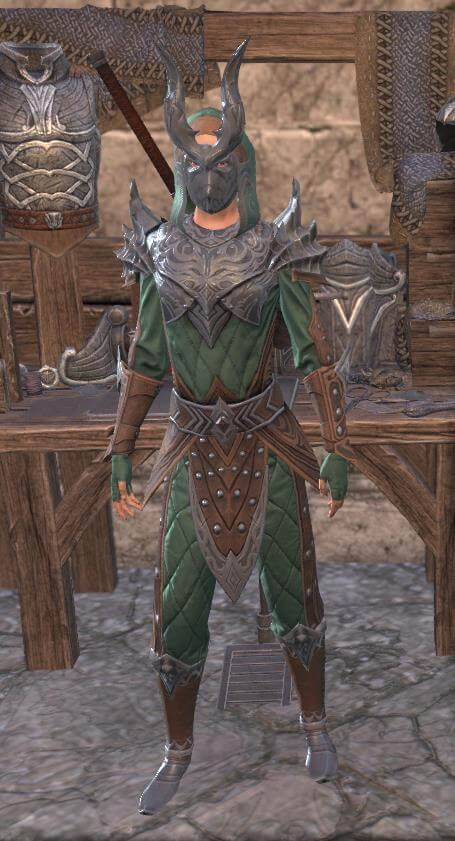 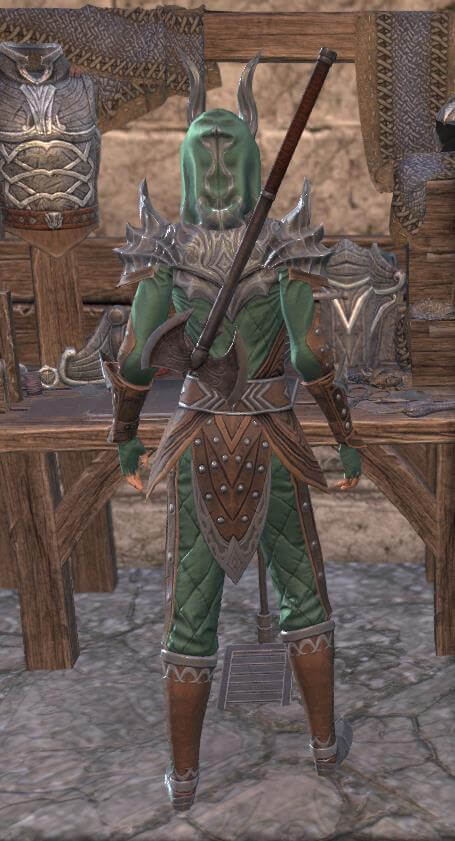 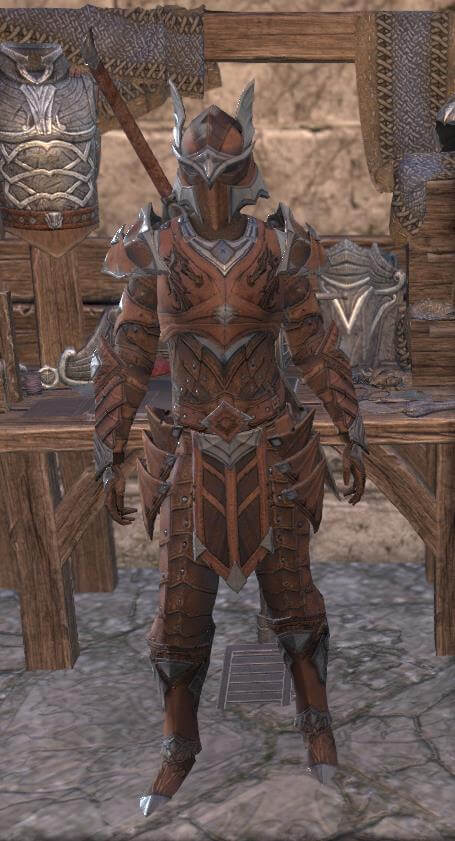 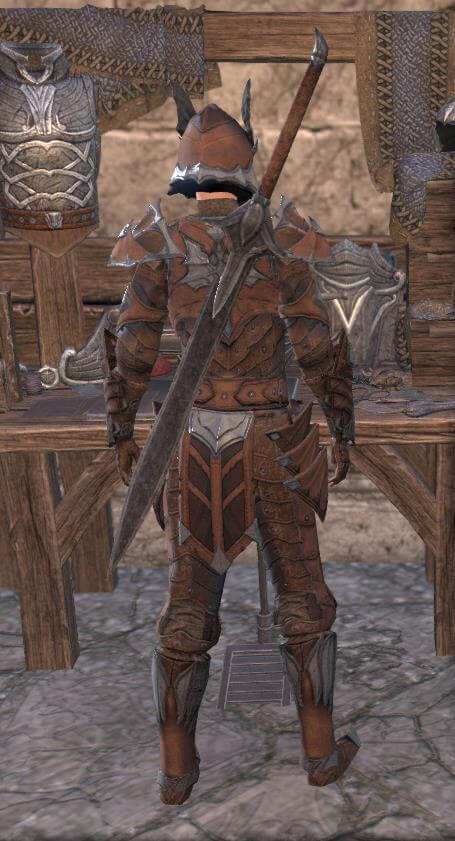 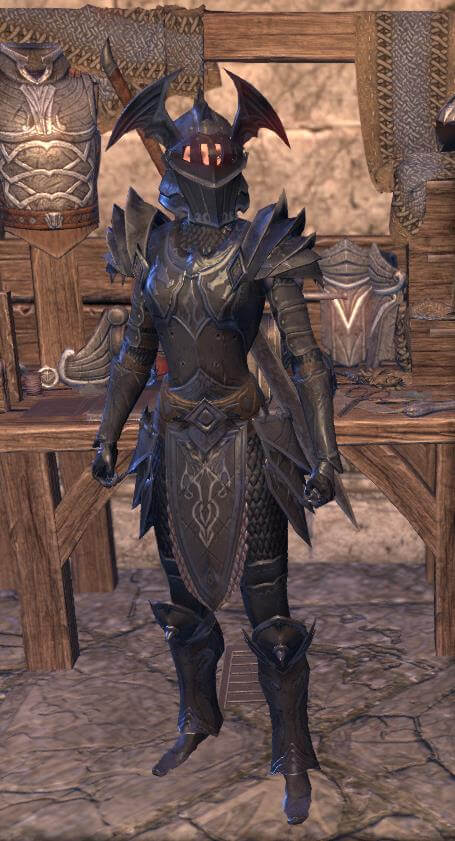 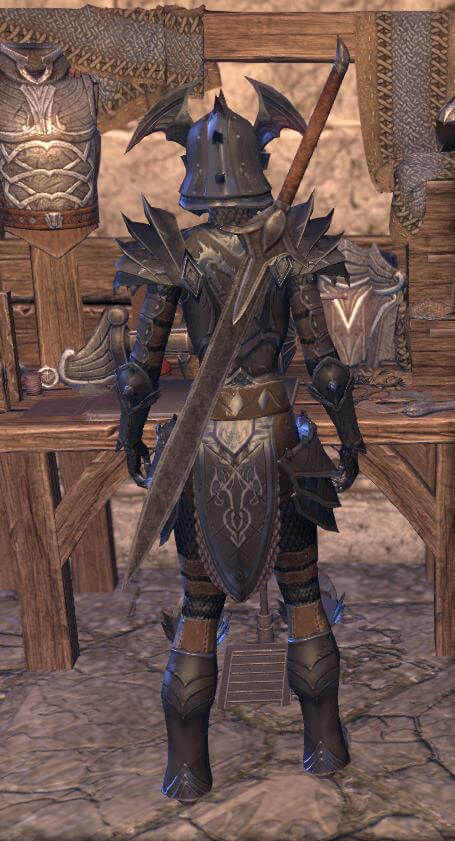 I'm no writer, Jhunal knows, but here I am, taking up the quill again at the behest of King Jorunn—or his advisors, anyway. I haven't seen that young rascal of a monarch in days. Wonder what he's getting up to?
Anyway: I'm supposed to summarize what our alliance arms and armor should look like, so the smiths and armorers all make them to uniform standards. I guess I can do that—by Shor's stones, I've seen enough of them!

We arm our Pact soldiers with axes based on traditional, proven Nord designs, only with Dragons stamped on them, because we stamp Dragons on everything in this alliance. Not that I'm complaining—can't think of a better symbol for something you'd better not mess with than a Dragon!

I like a nice, sturdy belt, without a whole lot of fiddly decorations on it that might snag your weapon's hilt when you try to draw it, understand? If you're a soldier for the Pact, that's the kind of belt we give you. You want to get fancy, look to your chest piece and pauldrons.

Personally, I like the Pact military boots: plain steel-toed sabatons, practical and easy to keep clean. Like Nords, really, except for the easy-to-keep-clean part. (Just kidding, Your Majesty!) But seriously, these are fine boots, though I admit they could be improved with a touch of fur.

For our Pact archers, we took a Dark Elf composite bow and added a couple of grinning metal Dragon heads on the forward facing. They look great, and enable the archers to use the limbs of the bow to parry with, if necessary.

All right, here's where we get fancy, with embossed Dragons and Argonian nature-designs and Dunmeri what-have-you, I don't know what those things are, but they look good. But don't be fooled by all the spangles and trim, these cuirasses aren't just for show: that's some solid steel and leatherwork, there.

When it came to choosing a design for our Pact daggers, we turned to the Dark Elves, because when it comes to sticking somebody in the back—no, maybe I shouldn't say that. Anyway, you'll see the crossguard is adapted from Tribunal symbology, though we did slap a Dragon on it.

I wanted some serious Nord gauntlets for our Pact soldiers, but the Dunmer and Argonians said they wanted their hands kept pretty free, so I got overruled on that one. They're good gloves, though, with some decent mail on the back of the heavier versions.

I must say, we outdid ourselves on the Pact helms, which have some proper flaring wings and horns to them. Warms an old Nord's heart just to look at them. They're solid, too, let me tell you, good protection all around, with full visors. Good headgear.

The front plates on the Pact greaves are nice and solid, and with enough trim to look good on dress parade, too. And I like the pointy poleyns on top—you want those when you're kneeing some milk-drinker in his stones. You do that to an opponent, you don't want him getting up again for a payback.

I like the one-handed Pact mace, it's a good, basic Argonian design: spikes, heavy round head, what more do you need? I think we went a little overboard on the two-hander, though, what with its three roaring Dragon heads and all. Harder for the smiths to craft, and it won't knock your brains out any better than its simpler little brother.

Pact shields take a basic Nord oval kite shape, and then add a bunch of spikes around the outside because, I don't know, the Dunmer and the Lizardfolk like lots of spikes. Oh, and we put a pair of big Dragons on the front just to remind our enemies which alliance is about to bash the crap out of them.

The Dark Elves from House Redoran insisted on big, flaring pauldrons, so that's what we gave them. And I have to hand it to them, they look good. Sometimes those fellows know what they're talking about.

By now you know what our alliance symbol is, right? So I'll give you one guess as to what we put on the heads of the staves of our Pact spellcasters. If you said "roaring metal Dragons," give yourself a pat on the back. If you said anything else, soldier, you're standing guard duty tonight, because you're too dumb to be allowed to go into town.

Like I said, we adapted a Dark Elf design for our Pact daggers, and it looked so good we just up-scaled it for our warriors' swords. Same straight blade, same semi-barbed point, same Tribunal-inspired crossguard with a Dragon stamped on it. Nice sword. Nothing like a good sword.