Trinimac Style is a craftable armor and weapon style in Elder Scrolls Online. Chapters may be obtained by opening a Wrothgar Daily Contract Recompense, awarded for completing daily World Boss and Delve Boss quests in Wrothgar.

Where to get Trinimac Motif

Chapters can be found in Wrothgar Daily Contract Recompense which is a reward for completing Daily Quests in Wrothgar. 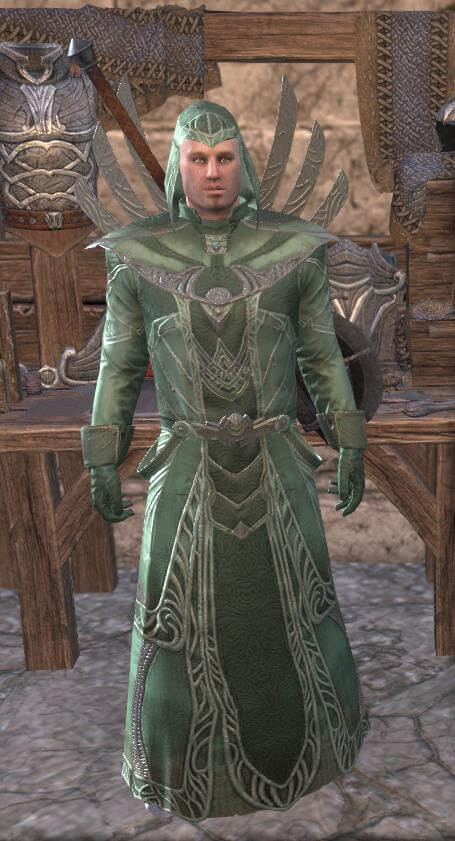 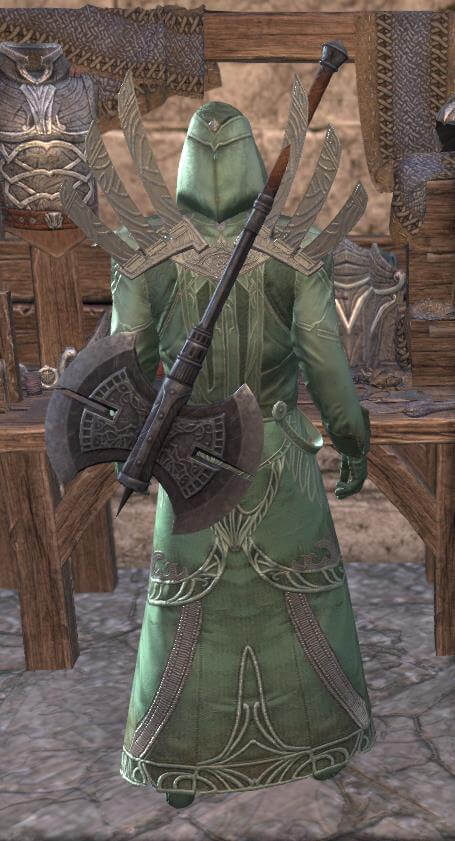 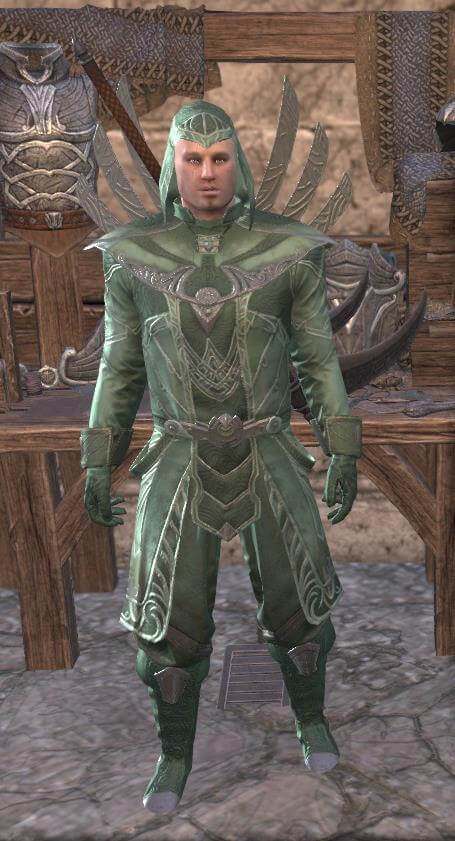 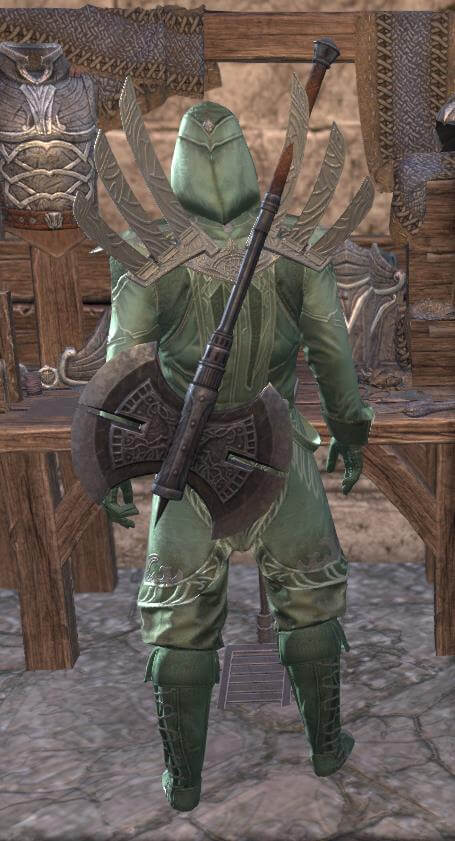 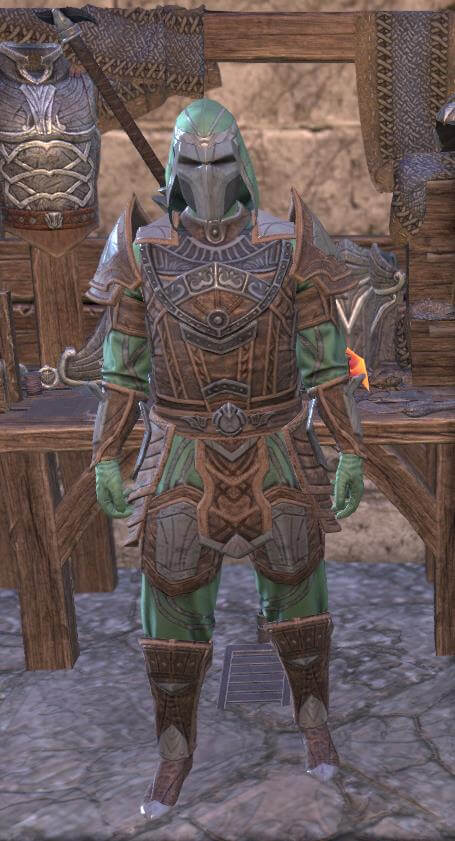 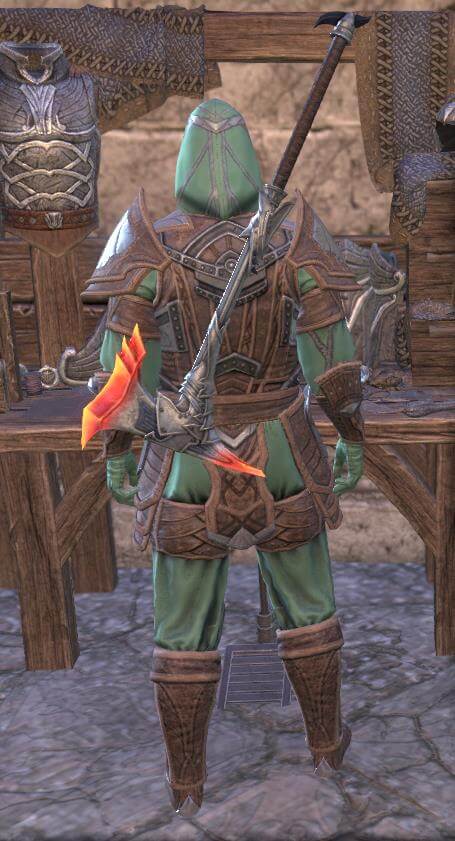 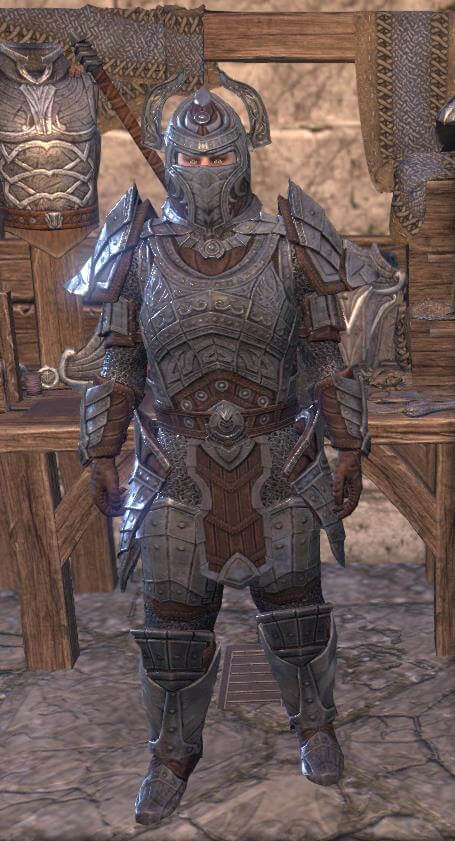 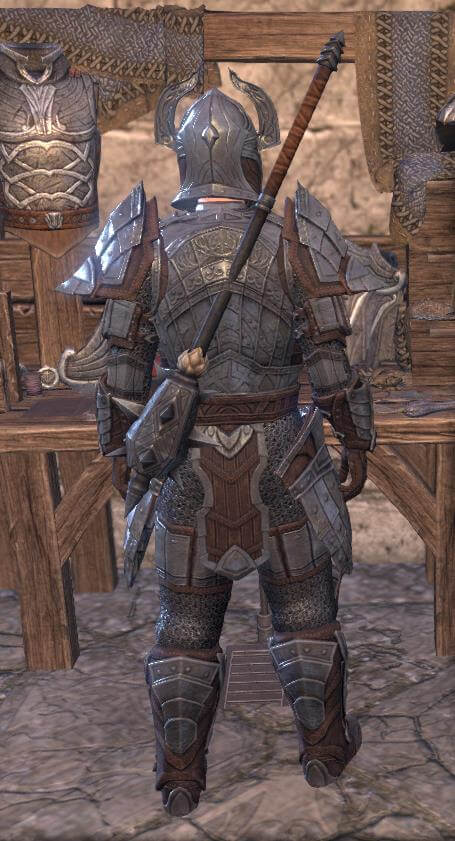 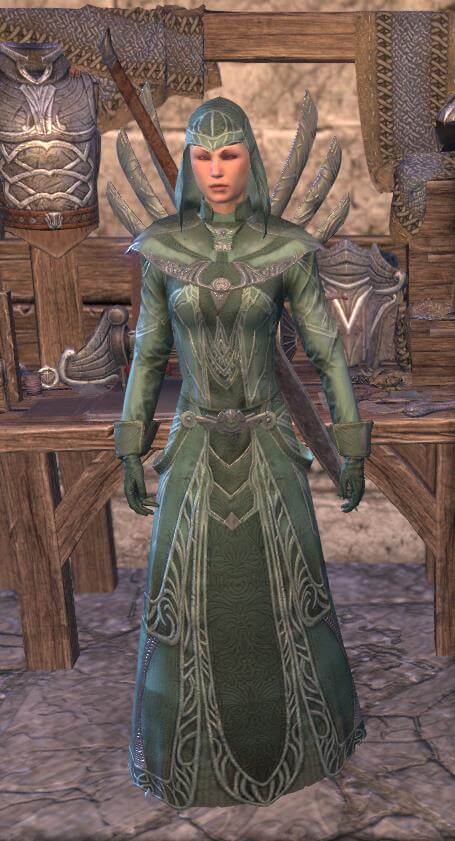 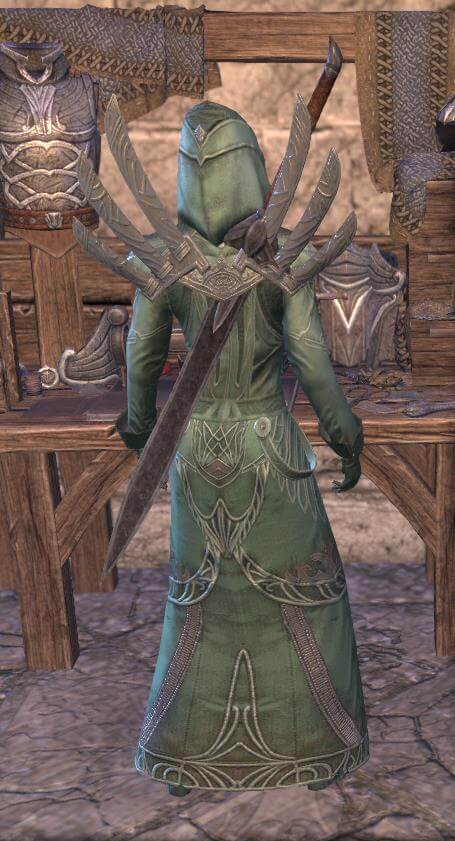 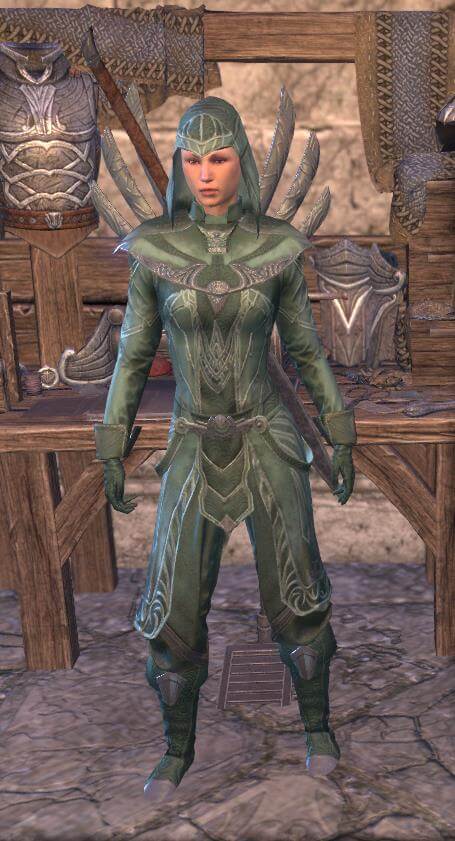 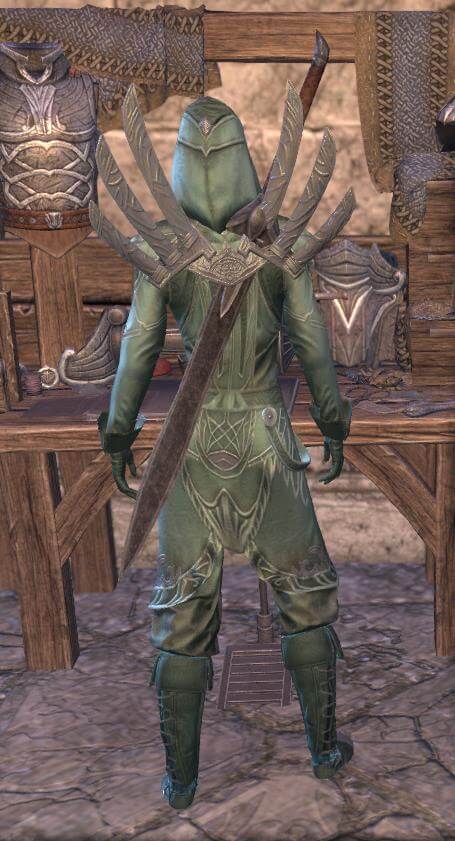 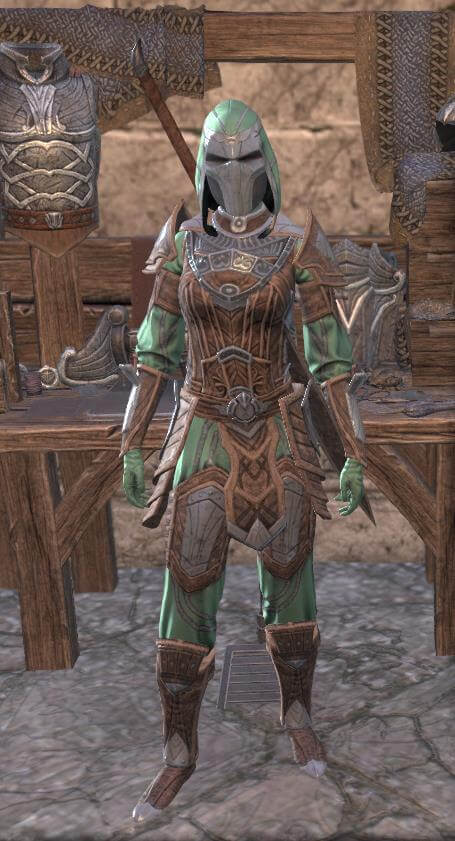 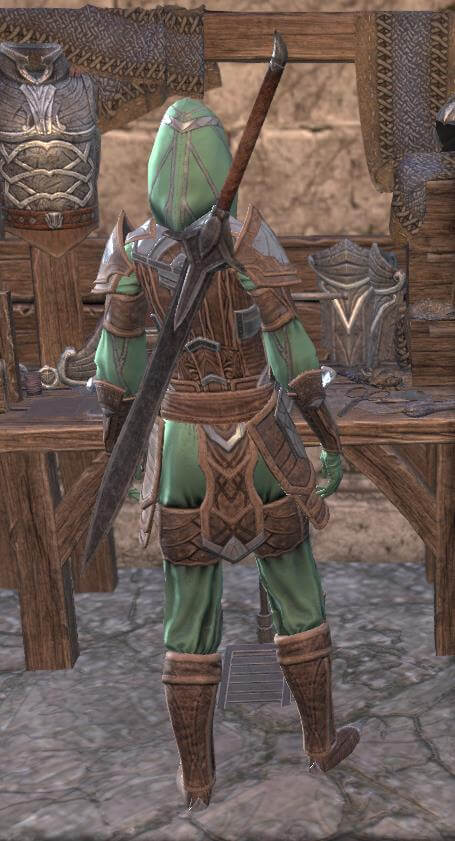 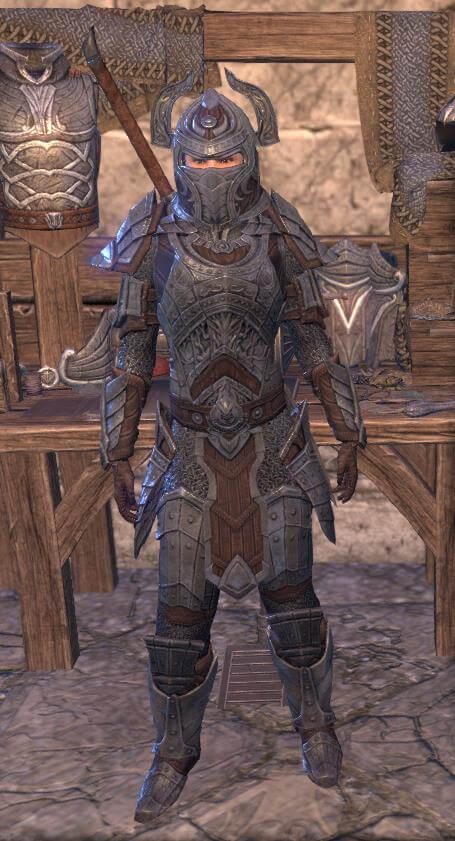 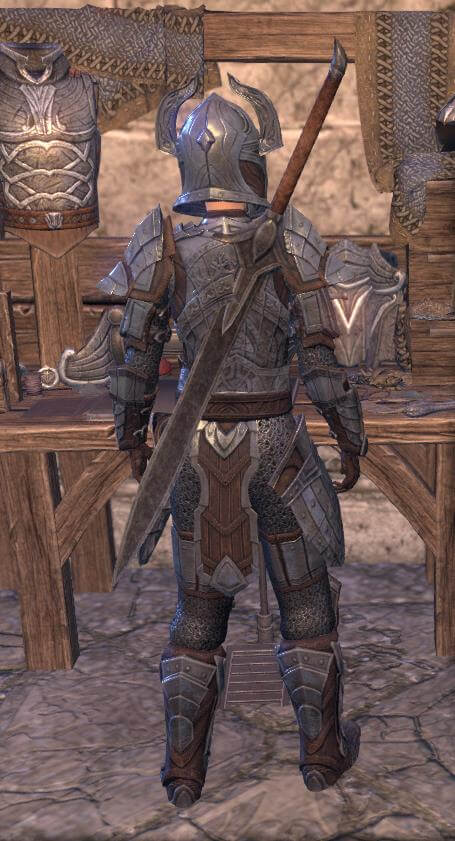 The Elves have forgotten the warrior ideals of Trinimac, but we Orsimer keep them alive! As the Children of Trinimac, we embody his stoic courage and bold audacity. The arms we bear and the armor we wear shine with gold, in remembrance of Trinimac's golden skin. And they are accented with polished ebony, in token of Lorkhan's blood when Trinimac tore out his heart.

The axes of the Trinimac Cult are notched to evoke the hero Avalian's axe, that was damaged when it cracked the heart of the fire mountain. The blades are embossed with Vaia's Golden Ash, symbol of strength and unity of the Orcs.

For the worshiper of Trinimac, the belt symbolizes the faith in the Golden Champion that binds the Orsimer together. Its buckle evokes the Champion's golden helmet, surrounding a quartz crystal that represents the clarity of Trinimac's vision.

The Children of Trinimac are warriors, so our shoes are sabatons, armored boots with metal-shod toes, gleaming with the light of the Golden Champion.

Our bows are crafted to emulate that of Elsarel, the Orsimer hero who slew the colossal Daedroth Zetthax with a single arrow through the eye. It is said Elsarel did honor to the Golden Champion by practicing with the bow for 20 hours out of every 24.

The cuirasses of the Cult of Trinimac are the highest expression of the cult's devotion to the perfection of artistic labor: intricate, ornate, rife with symbolism, and yet supremely crafted to perform their function of protecting the warrior in battle. In garb the warrior of Trinimac is ever resplendent!

Our daggers are forged of the finest steel, bifurcated into twin thrusting blades to represent the dual nature of Trinimac, the Golden Champion who is both slayer and protector.

The followers of Trinimac wear gloves of softest leather to enable fine manipulation, but cover their backs with articulated gauntlets of gilded splints.

The warriors of Trinimac wear gilded helms in emulation of the Champion's helmet, often with golden full-face visors to evoke Trinimac's stern features.

Full greaves, gilded and with knee poleyns, protect the legs of the warriors who fight for Trinimac, seamlessly overlapping the sabatons on the feet.

Those who follow the way of Trinimac call their rounded maces the "fists of Usunok," after the Orsimer hero who could down a full-sized mammoth with a single punch. The cylindrical head encloses a lead ball that rolls outward as the weapon is swung, adding force to the blow.

The shield of a Trinimac warrior is embossed with Vaia's Golden Ash, the tree from which she carved out the shield that repelled the blow of Rhogar the Destroyer, and which symbolizes the strength, heritage, and unity of the Orsimer people.

The pauldrons of a warrior of Trinimac soar like the wings of Zylvara, the great eagle that bore the Golden Champion to his reckoning with the man-demon Quarvish.

Ebony is said to be the solidified blood of Lorkhan, spilled across Tamriel when Trinimac ripped out his heart with more than hands. Therefore, in the Cult of Trinimac, we adorn our spellcasters' staves with knobs and insets of polished ebony.

The sword of a warrior of Trinimac gleams like lightning forged into steel. The one-handed swords are bifurcated like the daggers, but the greatswords are long, single blades, straight and without a taper until just short of the point.