Dreadhorn Style is a craftable armor and weapon motif style in Elder Scrolls Online. This Style is divided into several motif book chapters: one for each weapon type and one for each armor piece.

Where to find Dreadhorn Motifs

This motif drops from defeating Domihaus, the final boss of the Falkreath Hold dungeon. This requires the Horns of the Reach DLC.

The Style Item, Minotaur Bezoar, can be obtained by defeating bosses in Falkreath Hold. 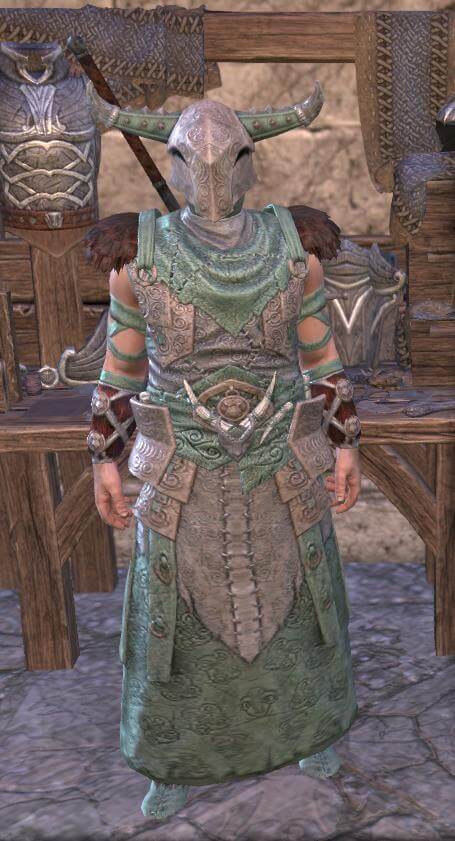 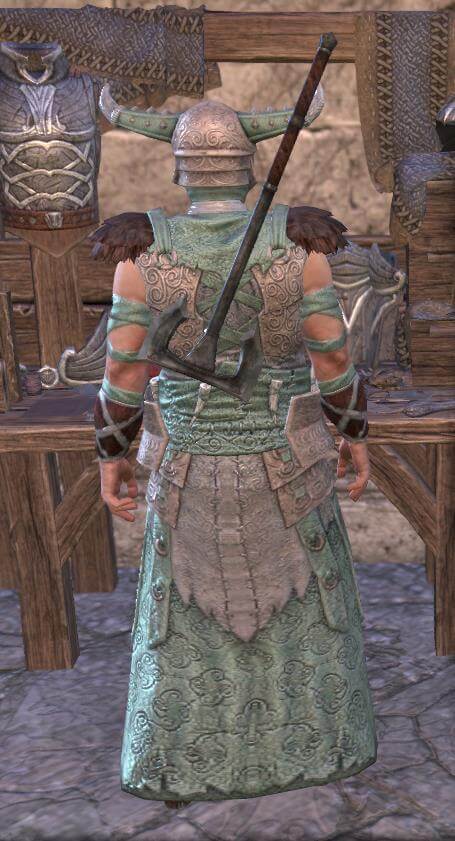 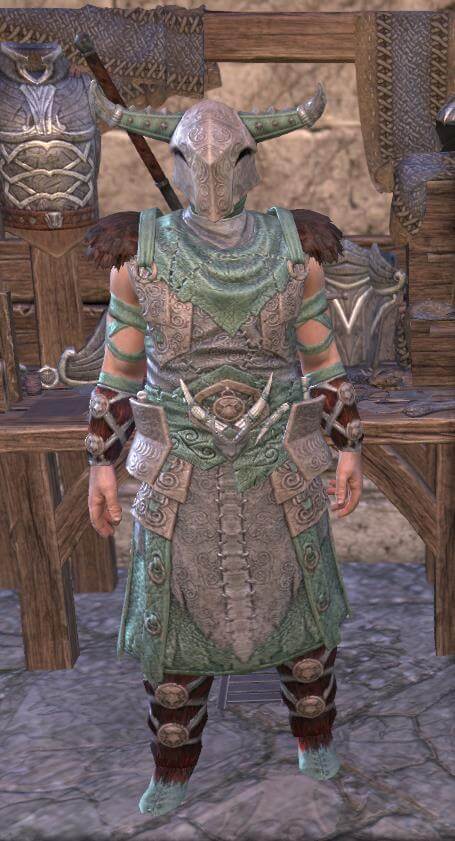 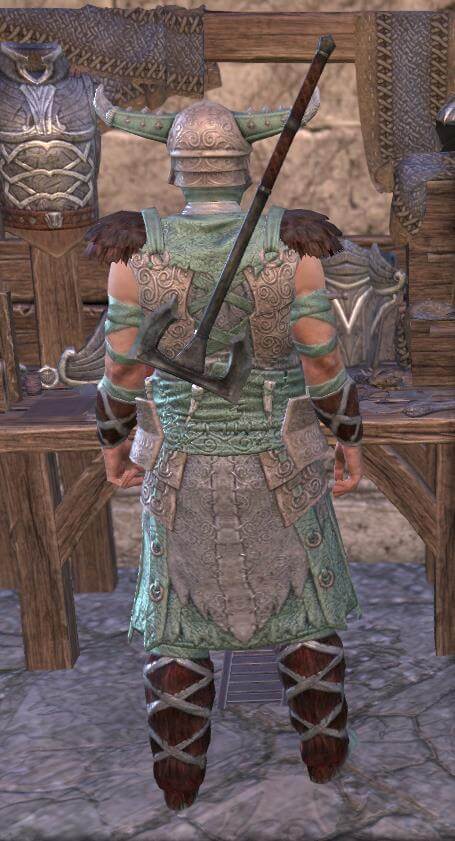 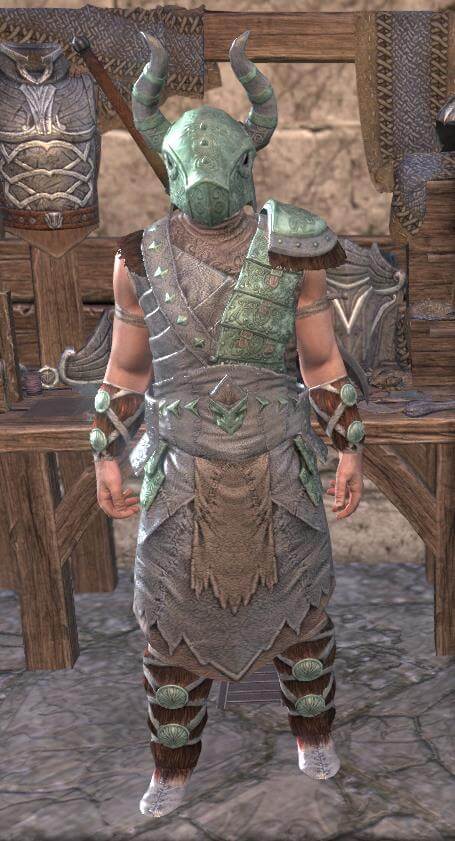 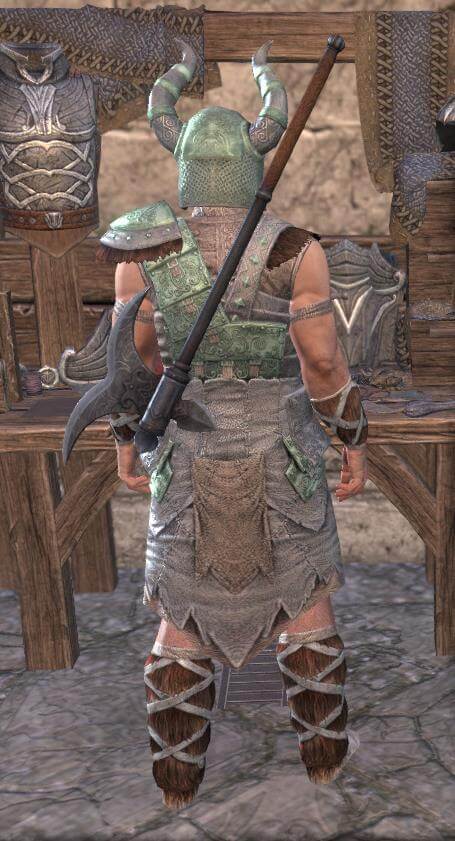 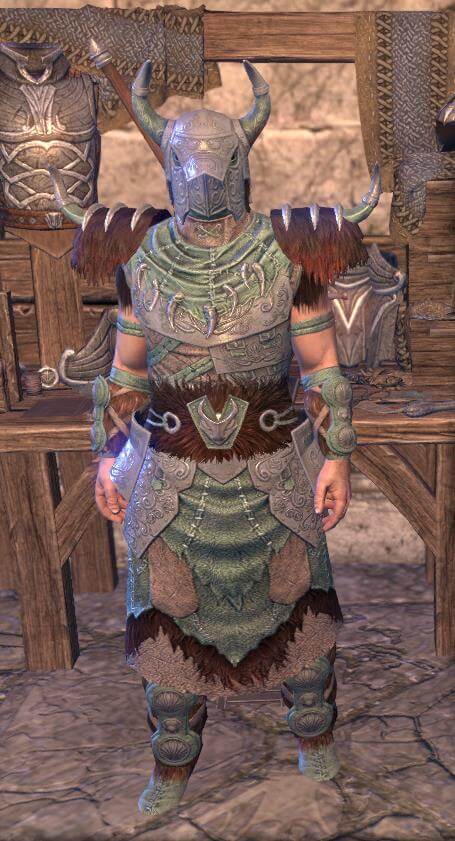 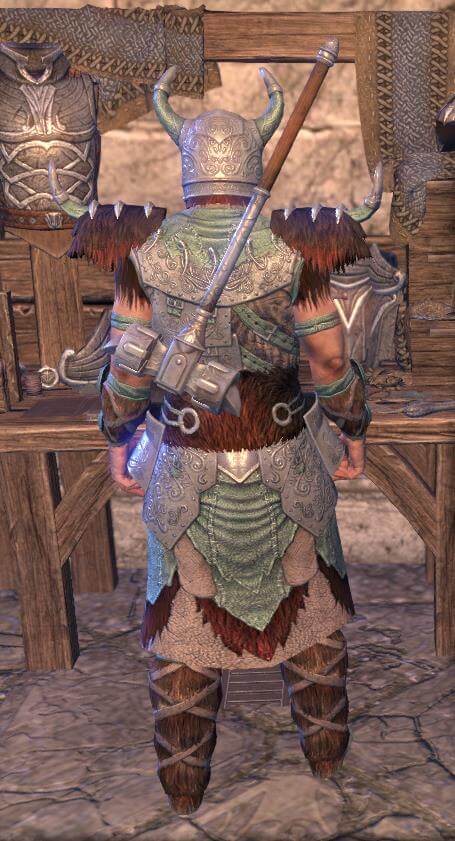 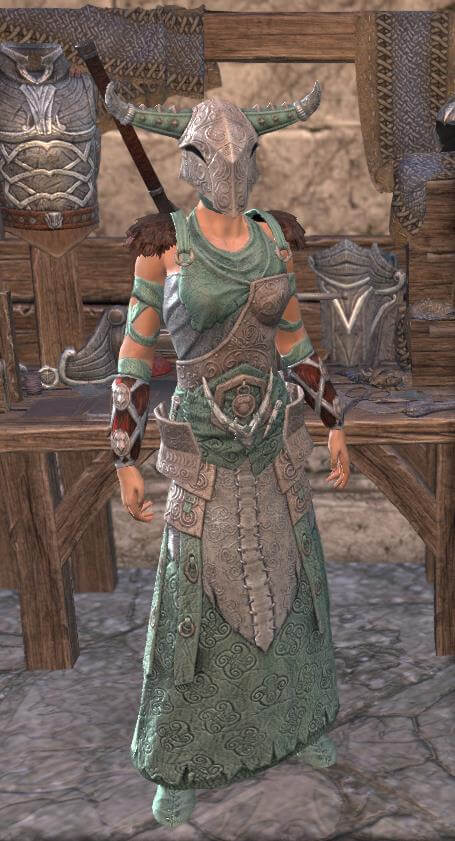 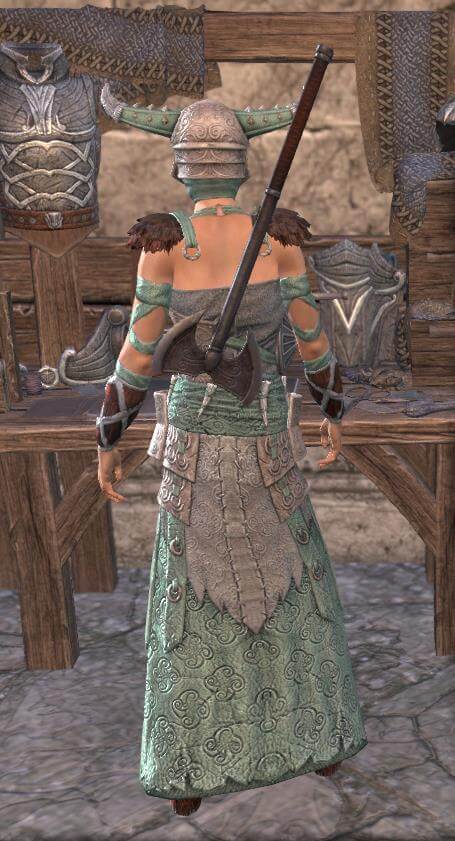 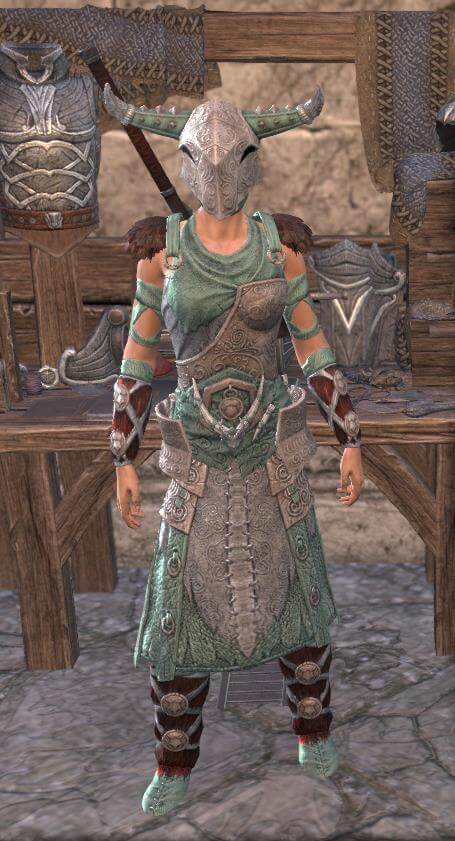 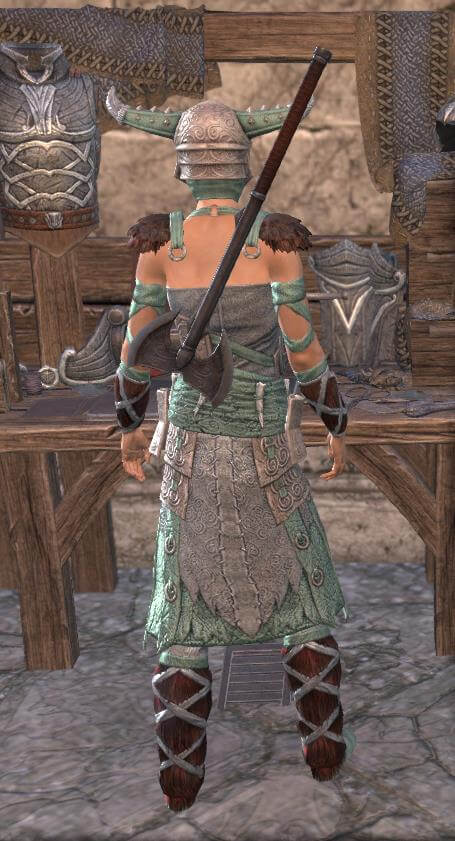 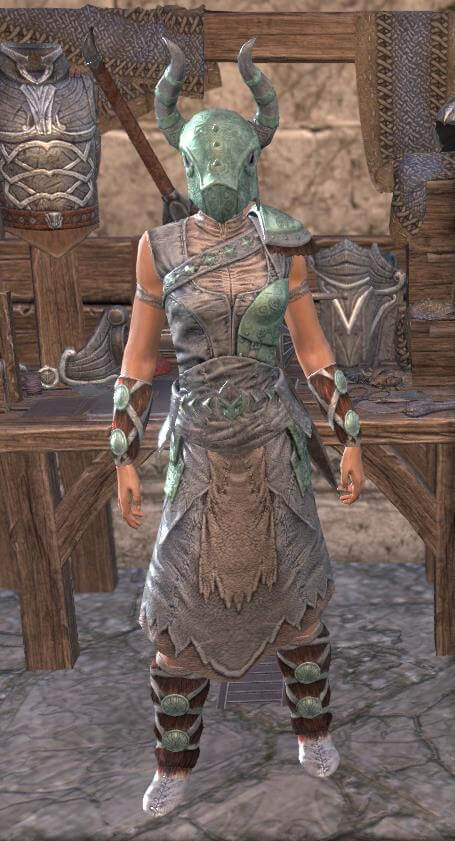 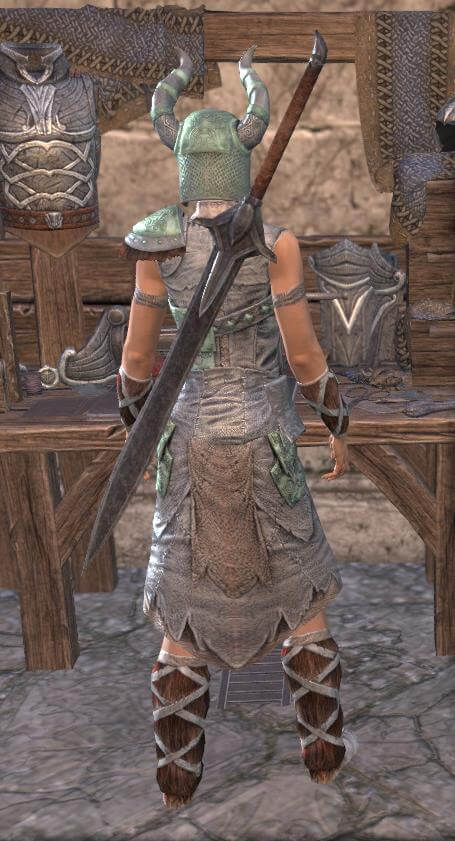 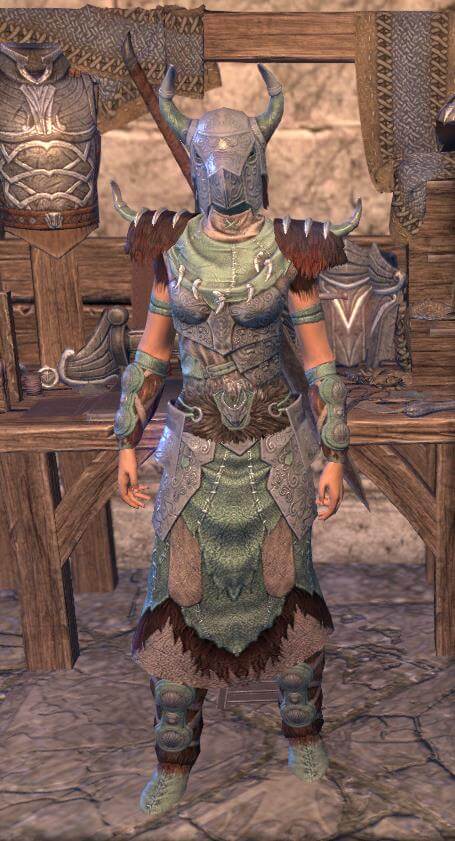 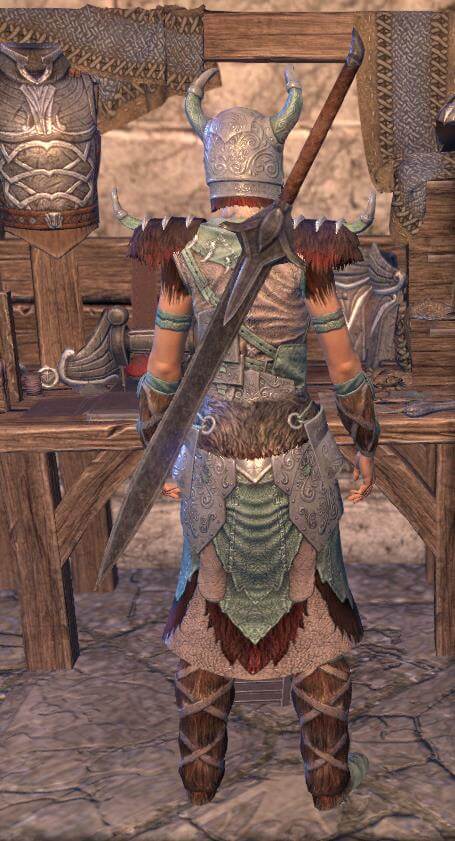 Wayward sons and daughters, set aside your old ways and embrace the Hunt-Father's terrible champion Domihaus! Henceforth, his ways shall be our ways! Listen to these, the new precepts for crafting our arms and armor, and set to work to outfit our reborn clan—as the Dreadhorn!
[Found this in the Forge, instructions for scum on how to make scum-work. Who knew those barbarians could read, let alone write?]

Hew down the trees of Falkreath Hold as you would the Nords who have taken root. Flense the skin until it is ripe and raw as bone. Lash to steel as angular and sharp as the Jerall Mountains and mark it with the creeping vines of the Bloodroot Forge so that it may share your thirst.
[Fit only for brutes, but dangerous enough with some muscle behind it.]

Bind tight your guts with the thick hide and hair of the minotaur and they will not be easily spilled. Pin the girdle with an icon of Domihaus at your core and his great power will stoke your hunger for battle.
[What a load of stinking bull manure! Fool superstitions won't stop pike nor pick, but that suits me just fine.]

Though our feet have been hardened by the pitiless stone of the Jerall Mountains, we will clad them in the unshorn skins of the bulls to keep our blood running hot and ready to stampede alongside the chosen.
[Until they trip over all the loose straps.]

Use the horns of our allies as your guide as you shape the timber of our bows, so they too are shown the Hunt-Father's favor. Twist the fibers of Bloodroot vines tightly to string your bows with their hungry veins. Sharpen the skin of the mountain to give it teeth, and unleash them like the Hounds toward your quarry.
[Stone arrows aren't the match of Nord Steel, but get pelted with enough and their cowardly pecking may strike true.]

Always guard your precious heart with the fruits of the Forge, for that is where it belongs. Remind yourself of this truth with glyphs of curling vines upon the steel. Beneath these Forge gifts, entrust your flesh to the hide, hair, and horn of the bull.
[Their hearts were black and empty before they started replacing them with stone.]

When we offer our prey to the Hunt-Father, it's work best left to a butcher's blade: hefty, to split bone, but kept short and sharp to twist through the joints of your kill. To this end, leave a blunt notch at the base of the blade to hook a finger.
[Some fool knife this is. Too fat for proper skinning. No wonder Reachman leathers look like dog-chewed pizzle.]

Whether the Nirncrux beats in your chest or lays inked in your skin, let the Nords see its power coursing through your sword arms. Bracers of leather, haired hide, and the steel icons of our clan are all the protection you need.
[We'll see how they feel after the might of a true Nord prunes their limbs to the trunk.]

The Hunt-Father has shown us his champion! We shall honor this pact by taking on the visage of the chosen! Hammer a new skull of steel in the likeness of our bull brothers. Adorn it with stud and cap and band, as you would mark your own head, for in battle this shall be your face.
[If I were a filthy, feckless Reach-dog, I'd want to pretend I was something more impressive too.]

We will shield our legs and loins with kilts of leather as has been our tradition, but wear upon them only emblems of the bull and the coiled vine. We are all Dreadhorn now. The old clan colors and glyphs are things of the past.
[Turn enough of these bulls to steers in the fields and they'll soon change their tune about their precious milkmaid skirts.]

The iron hides of the Nords may not be easily cut, but their inner softness can be battered and burst. Waste not your efforts on fanciful construction. A cudgel of four faces delivers a sturdy strike from any angle and its corners will crack even the toughest forged shell.
[Simple design to cover for their lack of skill. Good enough for their berserk flailing.]

Just as the bulls lower their heads for the charge, so too will we raise shields forged in their likeness and take their power as our own. Brand its face in brass and mark it with the glyphs of the Horned Lord's chosen.
[A solid chunk of crude steel can block a fine blade, but that won't matter once they're too tired to bring it to bear.]
SHOULDER ARMOR
Combined with our helms, our pauldrons help shape us into the visage of the broad shouldered beasts we march alongside. Craft them of leather or steel, but do not neglect to present the haired hide as your mantle.
[If these savages worshiped wolves he'd be telling them to walk on all fours too.]

Domihaus speaks for this land. Brandish an effigy of the Bloody-Horned and it will have no choice but to obey. Take the branches of our plundered home. Nail to it the face of the Hunt-Father's chosen rendered in steel and this icon will command the elements as he does.
[I don't know what Daedra-bothering creature he's yammering about, but I'd like to put its head on the end of a stick myself.]

The fangs and claws of the Forge are meant to taste blood! Tame the hot metal into a single broad blade with a snarling tooth at its point. Wrap the hilt in leather, and where you see fit to hold the blade, but never forget its thirst when you grasp the reins.
[It's true. The blades crave Reachmen blood as much as ours. Remember that.]