Elder Argonian Style is an armor and weapon style in Elder Scrolls Online. This Style is divided into several motif book chapters: one for each weapon type and one for each armor piece.

Where to get Elder Argonian Motif

Chapters or the entire book can be obtained from the following reward containers by completing Daily Quests in Murkmire: 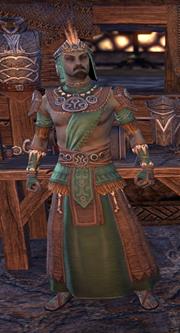 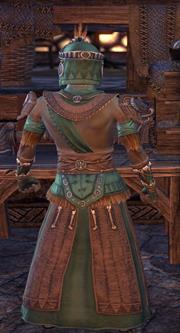 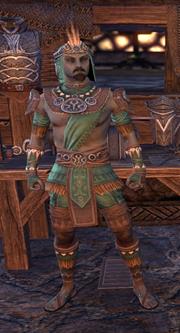 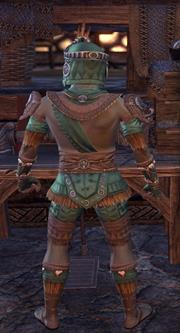 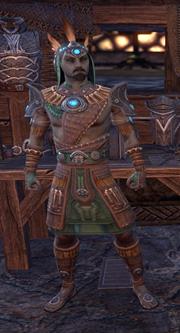 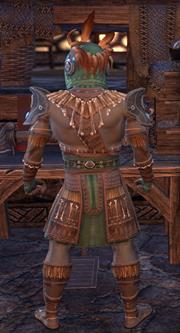 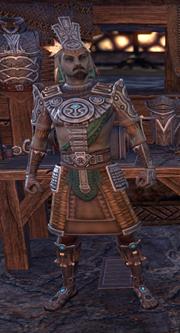 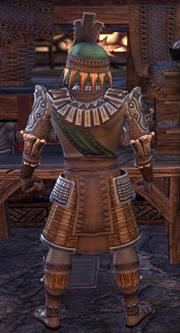 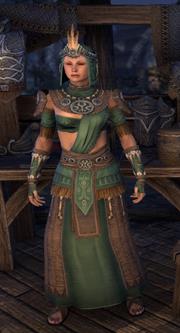 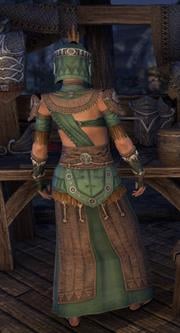 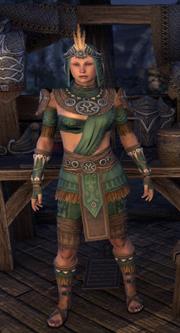 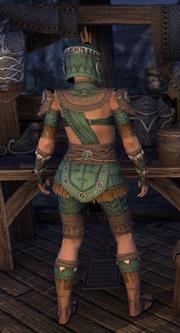 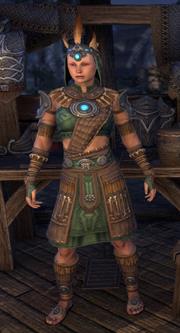 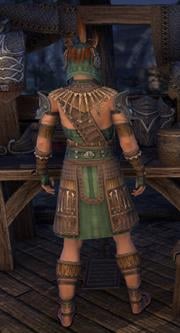 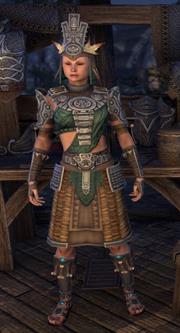 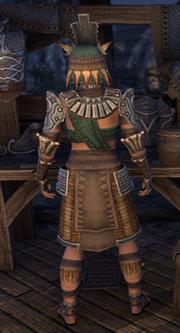 I am proud to present, on behalf of Cyrodilic Collections, my findings on pre-Duskfall Argonian raiment and adornment. The similarity of designs and motifs found during our expeditions across Black Marsh suggest that the Argonians once may have had a more unified civilization, or perhaps simply traded more widely.

The only elder axes we have recovered were clearly weapons of war, leading me to believe that mere tools might not have been created with the same care and grade of material. These war axes consist of one or two large shards of volcanic glass mounted in a brassy alloy and adorned with feathers, dyed yarns, and gold. This degree of metalwork is almost nonexistent in contemporary Black Marsh.

Belts were almost entirely decorative, consisting of expertly woven cloth sashes sometimes adorned with gold chains, rings, or colorful cord. Warriors would employ sturdier reptile hide belts over these sashes as an anchor for arms and armor. Emblems, worn at what would be our navel, often bore Sithis iconography.

Elder Argonians used more footwear than many modern tribes, though they still favored open designs that allowed them to keep their feet immersed. Rubber-soled sandals were uniform among all walks of life, though fringed leg wraps, anklets, and shin guards were frequent accompaniments for those of high status.

We still know little about the elder Argonians' relationship with the Hist, but I believe that the bows we've recovered were made from Hist wood. Perhaps they regarded the arrow as an extension of the Hist's will, like some fatal decree, though it might have been just the most readily available source of wood.

Elder Argonians preferred light sashes and wraps over tunics. This might have been to keep their frills and spines uncovered for communication. Armor was almost entirely constructed from bronze splints and mostly covered the shoulders and abdomen, suggesting that their own scales were expected to protect the exposed flanks and back.

Regardless of length, elder Argonian blades were made from a series of volcanic glass shards set in a beaten bronze channel. The prevalence of volcanic glass in so many weapons was quite surprising, given that there isn't any known volcanic activity within Black Marsh itself. That suggests the Argonians may have regularly ventured into what we now call Morrowind.

Much like their descendants, elder Argonians found gloves impractical. They either used a fingerless mitt that hooked upon the thumb, or hand wraps like those favored by pit fighters. Cloth or leather bracers were commonly worn for decoration and protection, some of the latter mounting rigid metal splints for war. Frilled bands around upper arms were also nearly universal adornments.

A simple circlet or headband acted as the base upon which many styles of headwear could be built. Most had prominent ornamentation above the face and employed feather plumes, jewels, and great brass icons as decoration. Impractical as it may seem, these headdresses were even worn into battle over leather hoods.

Where a simple loincloth is one of the more widely preferred pieces of legwear among tribal Argonians now, their ancestors swaddled themselves in elaborate layers. Knee- and ankle-length skirts and pants were often layered with other frilled skirts and dangling drapery. Warriors favored a top layer of rigid leather or woven reeds reinforced by bronze and bone.

War bludgeons we recovered from a sunken foundry were impressive. Made largely of bronze, these weapons must have been wielded by warriors of great stature. Though it is the striking ends that are the most interesting features. Usually styled after Argonian heads, the designs were angular—almost geometric—and familiar, as was the metal it was cast from.

Maybe it was the way the glass teeth along the rim reminded me of a cog, or the orange tinge of the shield's face, or the boxy scrollwork, but the answer to the nagging familiarity I felt with elder Argonian metalwork struck me like one of their maces: Dwarven influence. Black Marsh may not always have been as insular a province as it is these days.

Usually a combination of leather and bronze, shoulder guards consisted of nothing more than a simple curved pad and a strap to loop through the pit of the arm. Rather than being shaped to fit over the shoulder, many simply projected upward—some as high as the wearer's jaw, making them something of a neck-guard as well.

Staves were primarily instruments of the priesthood of Sithis. Many of these bronze rods were capped with icons and symbols of the Great Serpent to whom the priests made their sacrifices, but some bore razor-sharp, glass teeth intended to spill blood in many of their ceremonies. All evidence points toward Sithis playing a more central role in ancient Argonian worship than in modern day, at least among most tribes.

We didn't understand why volcanic glass was preferred for blades when the ancient Argonians already possessed the capacity for metalwork. In testing one of the glass swords, we quickly learned that the brutal sharpness was frightening for as long as the glass remained intact. It's also easy to replace in the field and lighter than metal sharpening equipment.