Order of the Hour Style is a craftable armor and weapon style in Elder Scrolls Online. This Style is divided into several motif book chapters: one for each weapon type and one for each armor piece.

Where to get Order Of The Hour Motif

Found completing the quest The Roar of the Crowds in the Gold Coast.

Order of the Hour Style Gallery 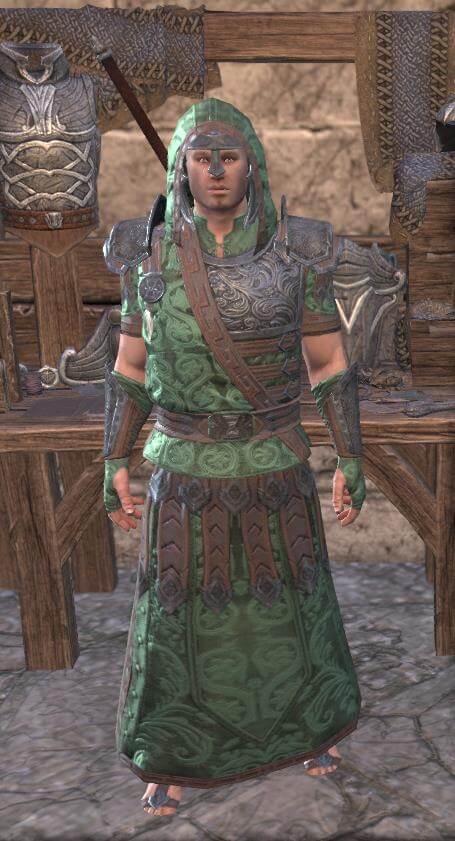 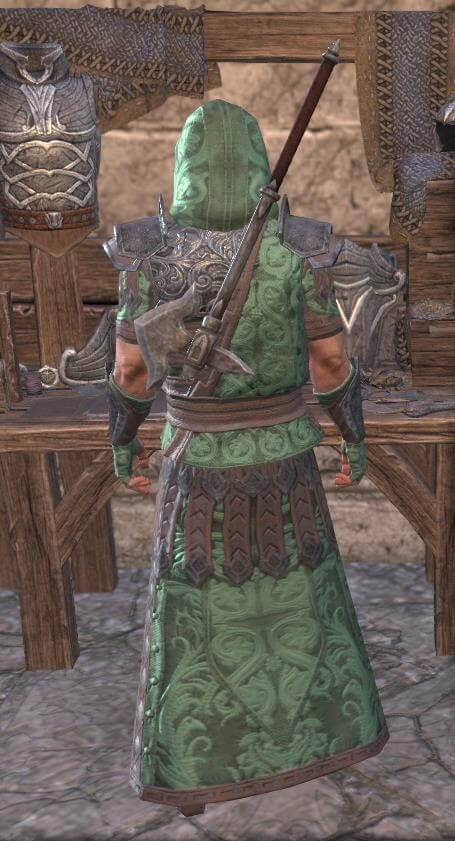 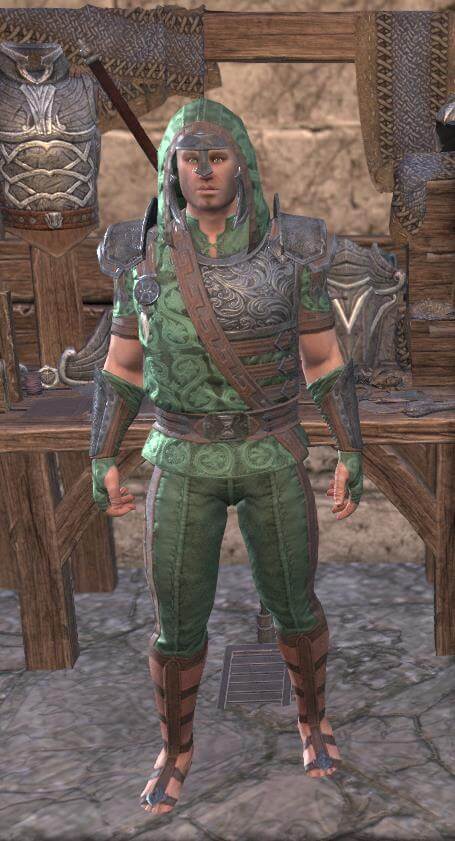 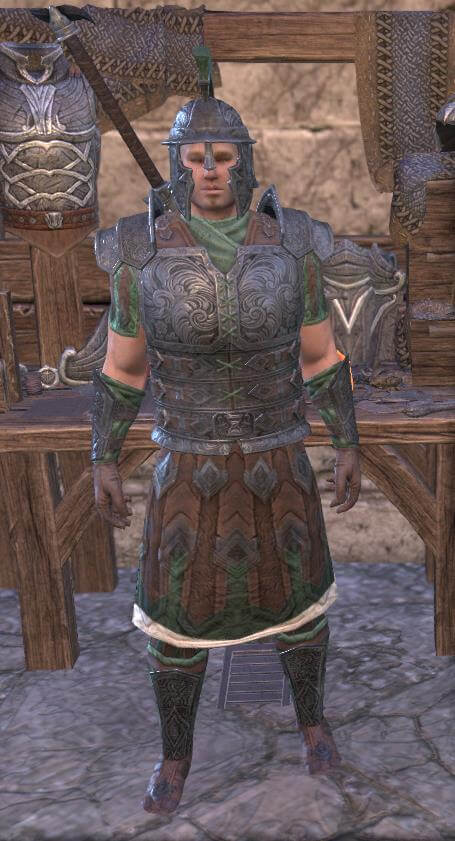 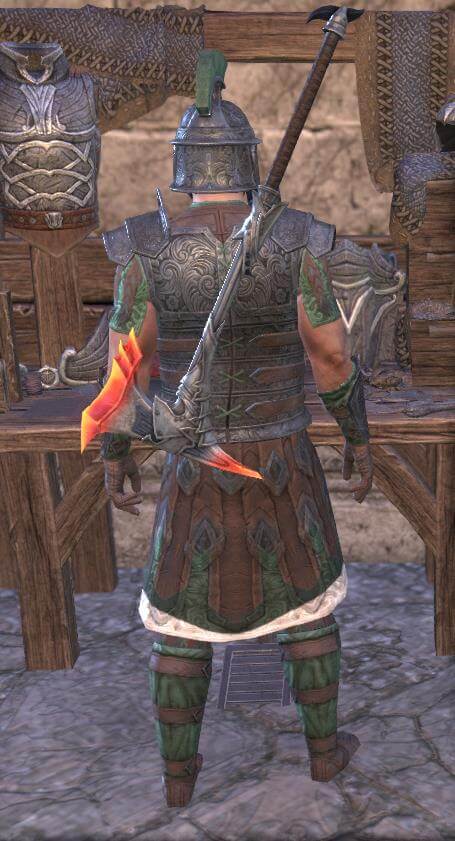 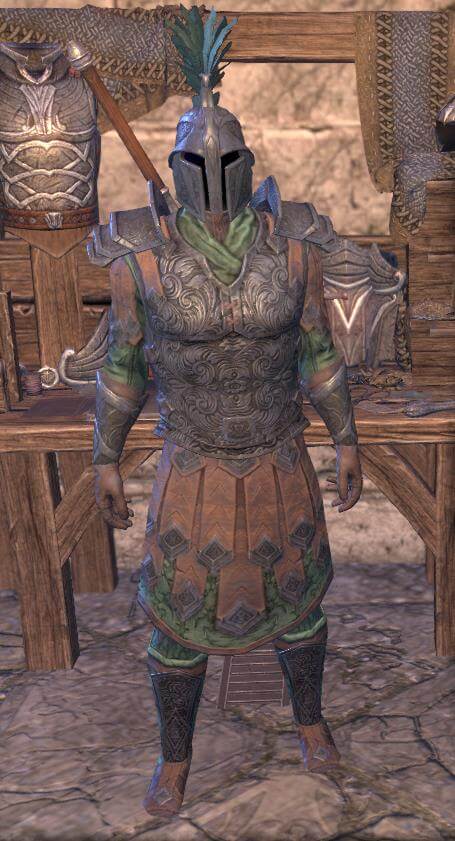 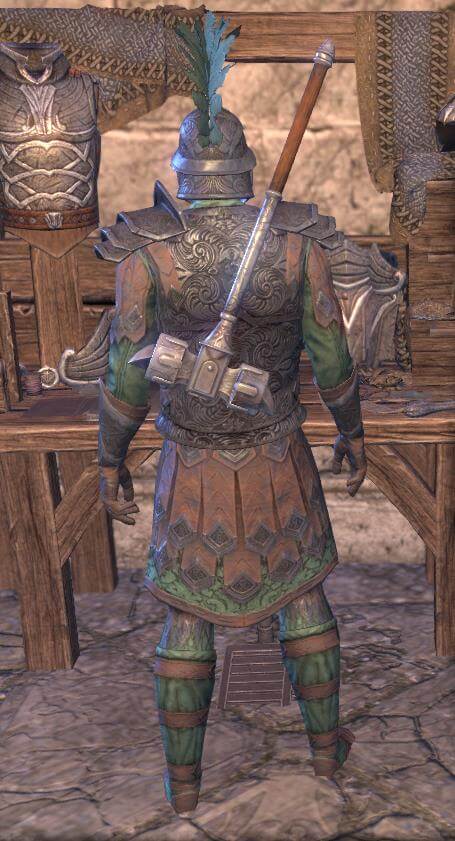 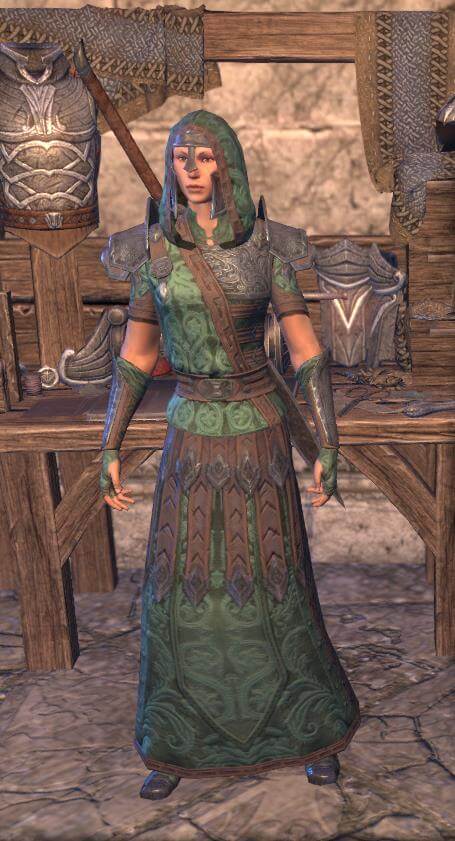 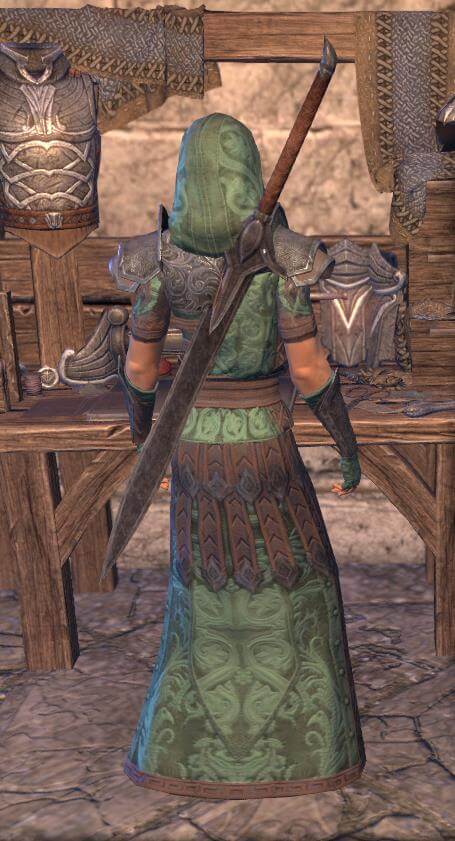 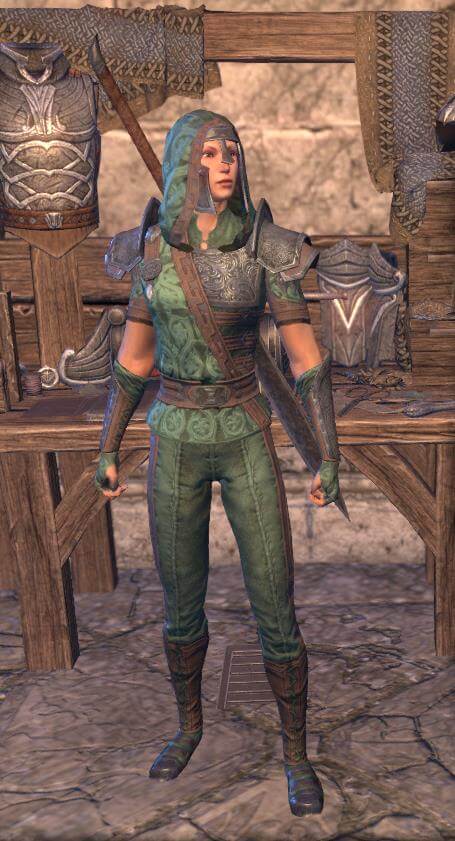 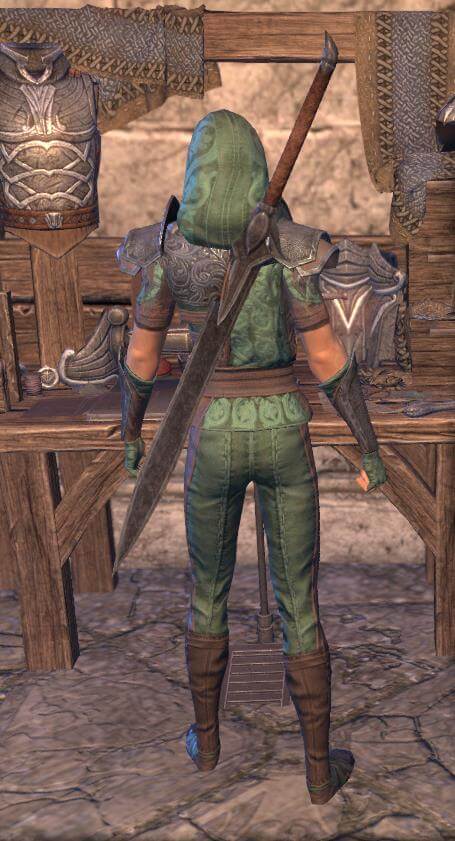 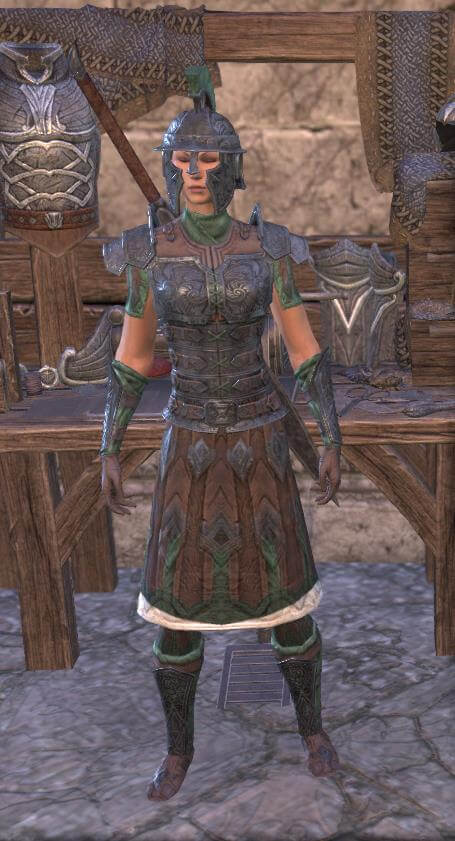 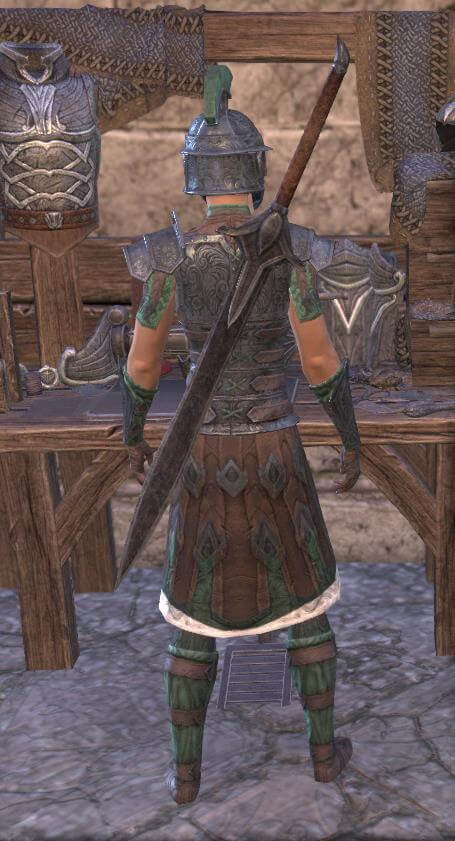 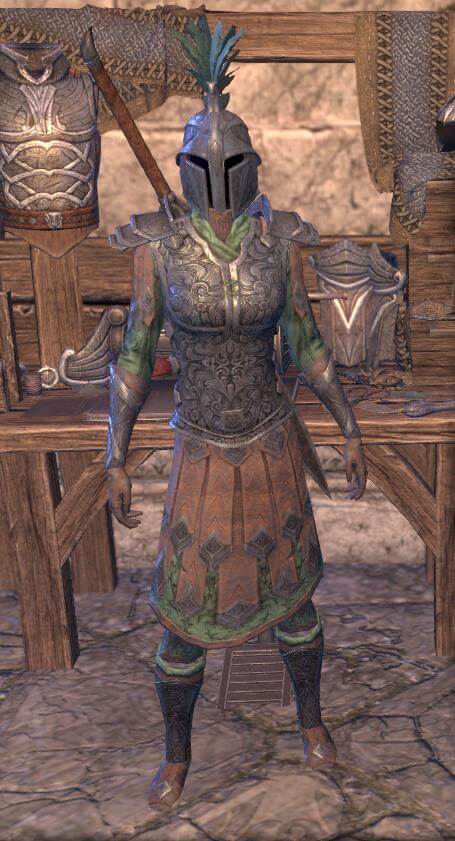 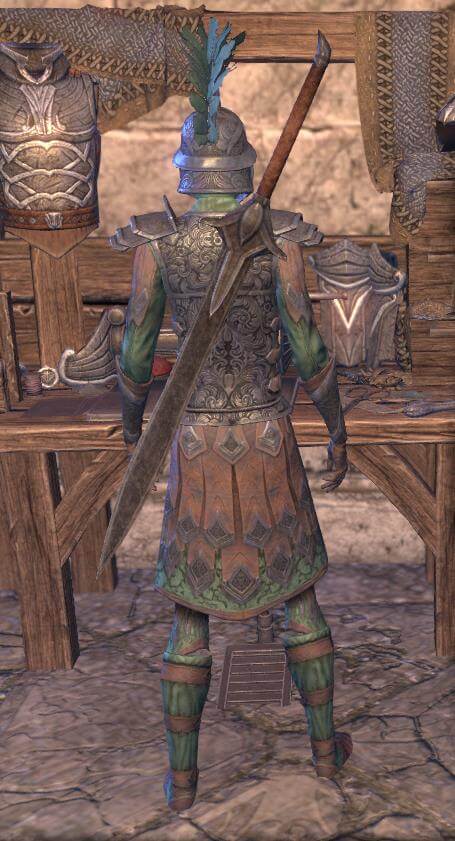 Order of the Hour Motif Books

The Order of the Hour is the defensive arm of the Chantry of Akatosh, and as well-disciplined knights of the Order, you must at all times properly represent the dignity and glory of the ancient Imperial worship of the Dragon God of Time. Though the Order is not technically a part of the Imperial hierarchy, we nonetheless embody the virtues of the old Empire—and our equipment must reflect those virtues as well.

The Order's axe, whether one-handed or two, is a weapon not overlarge, but rather well-balanced and wieldy, for use in both military melee and civilian riots. The long axe-head is as useful for prying as it is for chopping, and it's backed by a strong spike that can be used to dismount opponents or dismantle barricades.

The belts worn with Order armor blend in with the cuirass above and the tassets below, seemingly part of the greater armor set rather than a separate garment—much as every Knight of the Order sets aside his or her personal agenda to become a living embodiment of the will of the Primate. The buckle may display the hourglass symbol of the Akatosh Chantry.

Our knightly footwear is adapted from the standard sandals of the Imperial legionaries, and pays tribute to the Empire by displaying a Cyrodilic diamond on the instep. In the heavier armor variations, the entire foot is wrapped in flexible leather for protection.

Knights of the Order of the Hour stress the skill of mounted or hand-to-hand melee combat, and place little emphasis on ranged attacks. Our bows, therefore, are relatively simple implements of yew or ash, decorated just enough to do honor to the dignity of our position in the Colovian community.

Our cuirasses are based on Imperial Legionary armor of the Reman period, but ornamented with swirling designs representing the roiling mists of time, optionally supplemented by Imperial diamonds or the hourglass symbol of the Akatosh Chantry.

The Order's dagger is a broad, triangular stabbing blade, a smaller version of the Imperial gladius, or short sword. It is edged on both sides, and narrows to a razor-sharp needle point. The quillion is barely broader than the base of the blade, and may be ornamented with a diamond or hourglass symbol.

A rigid upper gauntlet protects the forearms of Knights of the Order of the Hour, ornamented with swirling time mists, and perhaps an Imperial diamond or Akatosh hourglass. The gloves that cover the hand are made of supple kid leather, to facilitate the grip of our weapons.

The design of an Hour Knight's helm harkens back to the officer's helmets of the Imperial Legions of the Second Empire, with a proud and noble crest above, and nasal and cheek plates to protect the face. No knight should fear getting embroiled in close melee because his or her face is unprotected.

The standard leg armor worn by Knights of the Order is faced in front with rigid kite-shaped greaves to protect the shins, ornamented as desired with time-swirls, Imperial diamonds, or the Akatosh hourglass. A small hourglass may even be inset within a large diamond.

The Hour Knight's mace has a heavy spherical head, studded with pointed spikes. This is a weapon for killing, not crowd control, and is used only in military affairs where the enemy is to be given no quarter. The upper haft is sheathed in metal to enable parrying.

The shield of the Order of the Hour is distinctive, so that all may know whom they oppose. It is large and rectangular in design, and made of good steel, though to keep the weight down the metal is thick only at the edges and in the center. Its chief symbol is a great hourglass, showing a double twist that represents our devotion to duty and the right.

Like our cuirasses, an Hour Knight's pauldrons are based on the armor of the Second Empire, with two or three curved, overlapping plates, rising toward a vertical gardbrace that protects the side of the neck.
STAVES
The staves of the Order's spellcasters are truly magnificent, with finials like great hourglasses crowned with the wings of the Dragon God of Time. The ferrule at the end of the haft is a pointed steel spike, and the haft itself is decorated with designs that evoke the swirling mists of time.

A Knight of the Order of the Hour bears a sword with a long, broad, triangular blade, edged on both sides and pointed for thrusting. The crosstree is narrow, as our melee doctrine emphasizes active parrying, rather than letting the opponent's blade slide to the pommel, which is just sloppy.