Hlaalu Style is a craftable armor and weapon style in Elder Scrolls Online. This Style is divided into several motif book chapters: one for each weapon type and one for each armor piece.

Where to get Hlaalu Motif

Chapters or the completed book can be found in Safeboxes, Thieves Troves or pickpocketed from the residents of  Vvardenfell. 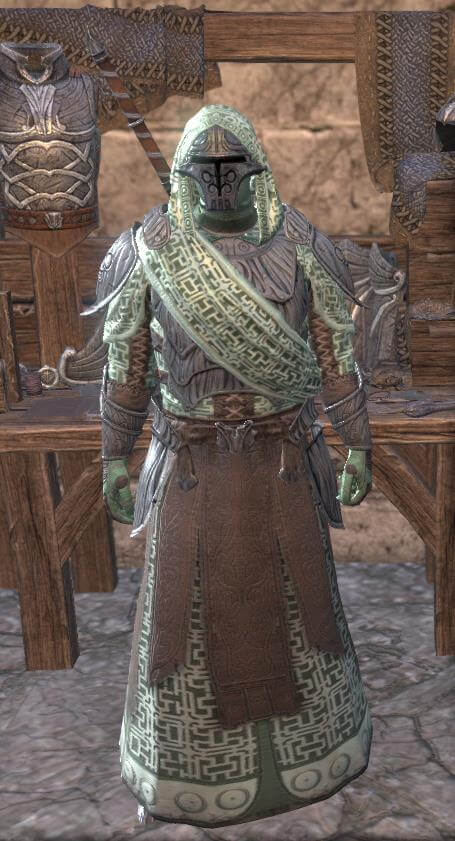 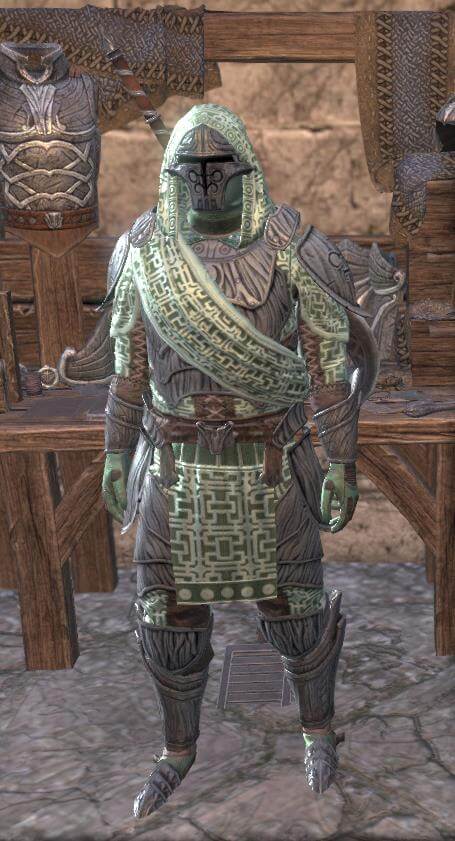 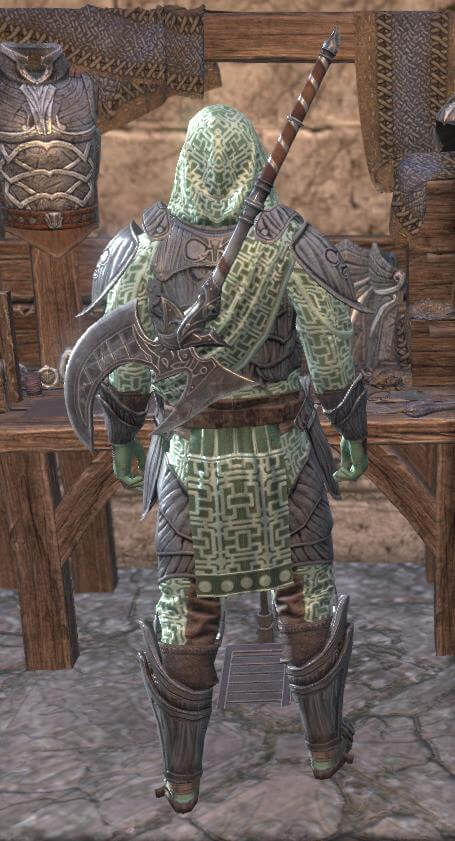 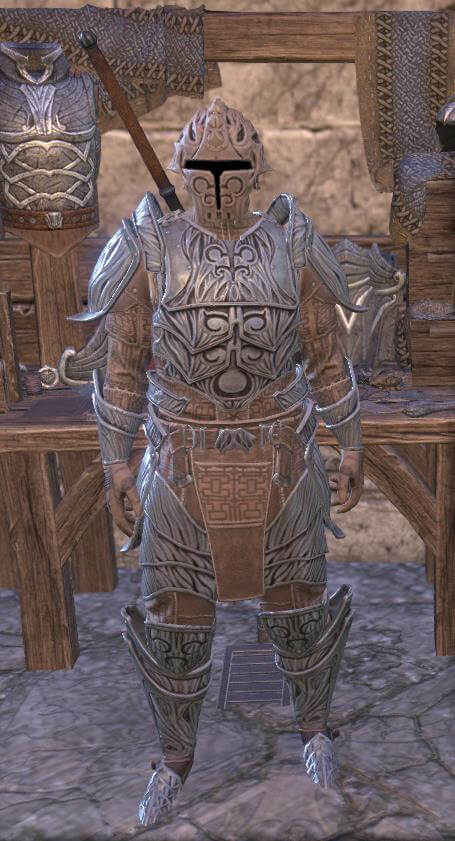 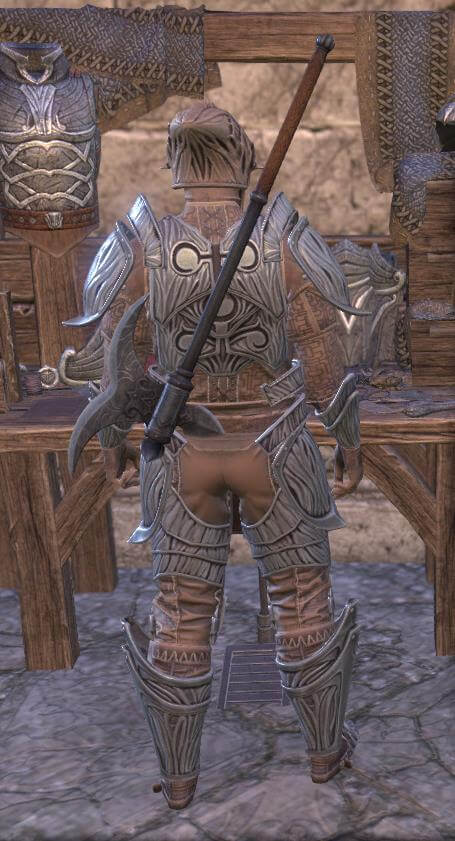 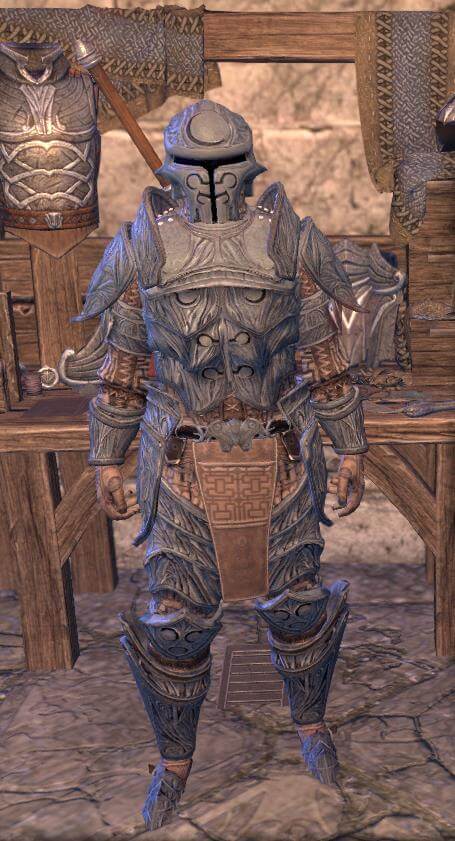 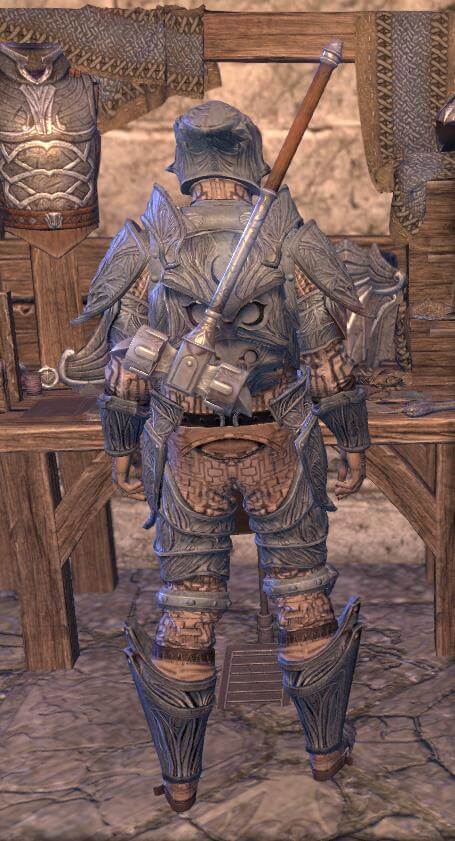 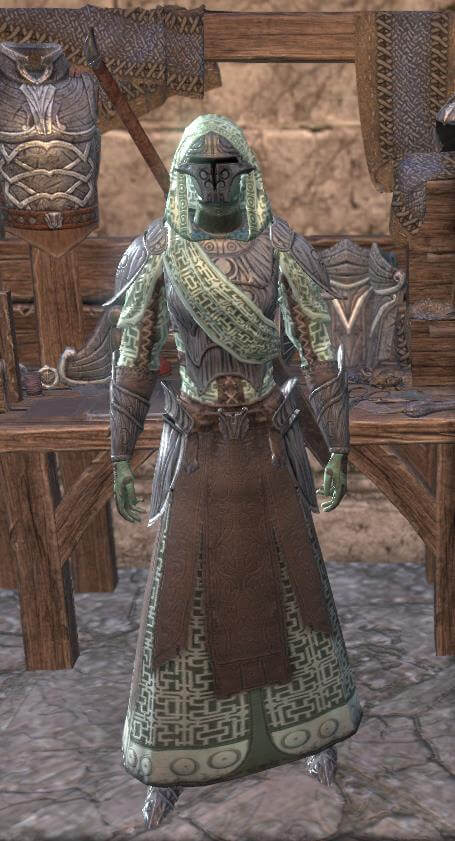 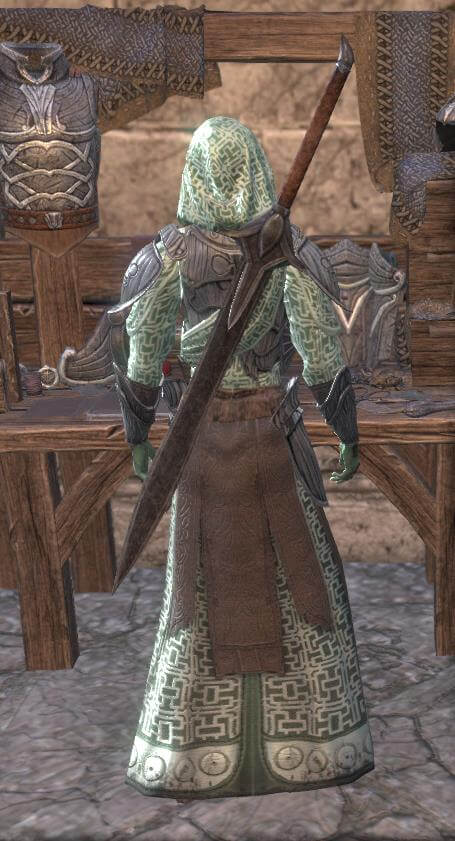 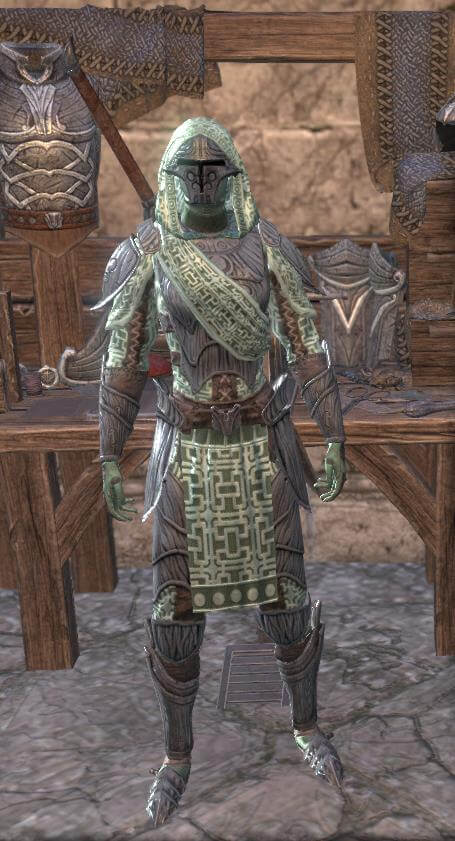 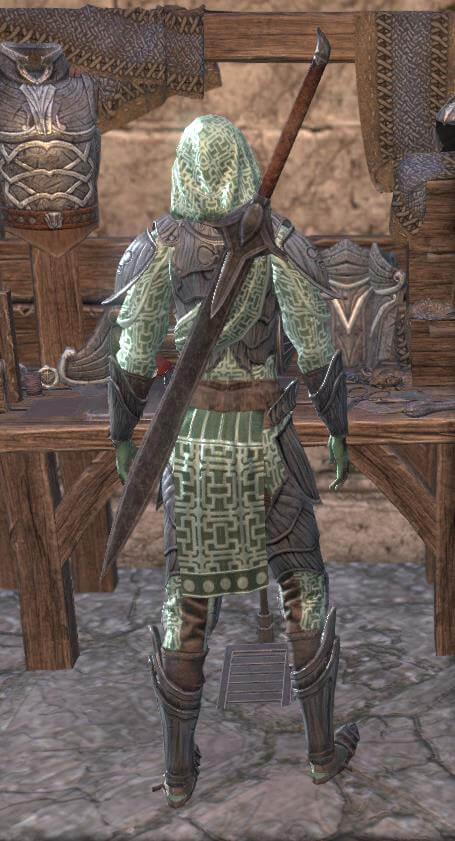 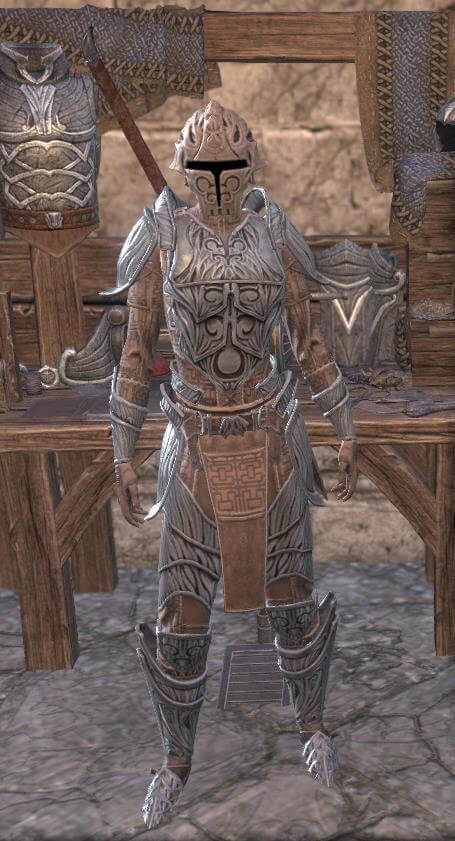 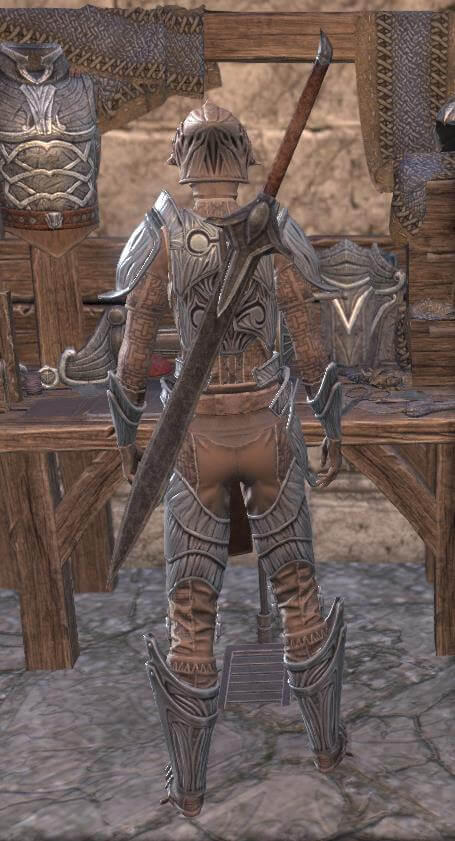 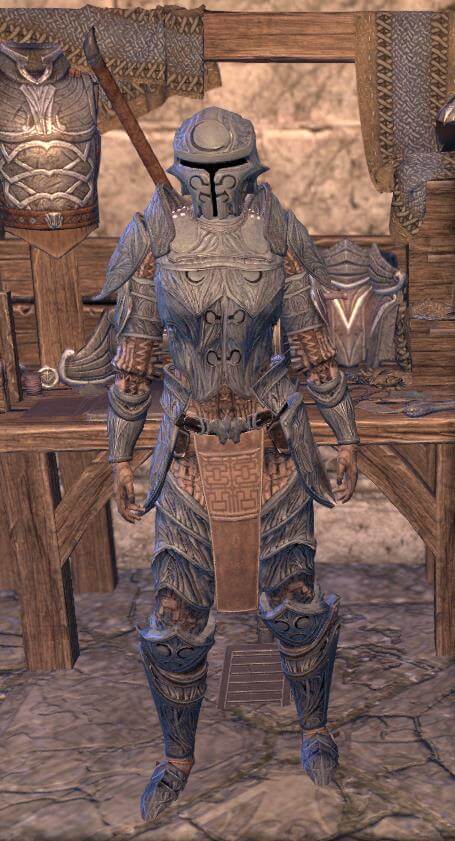 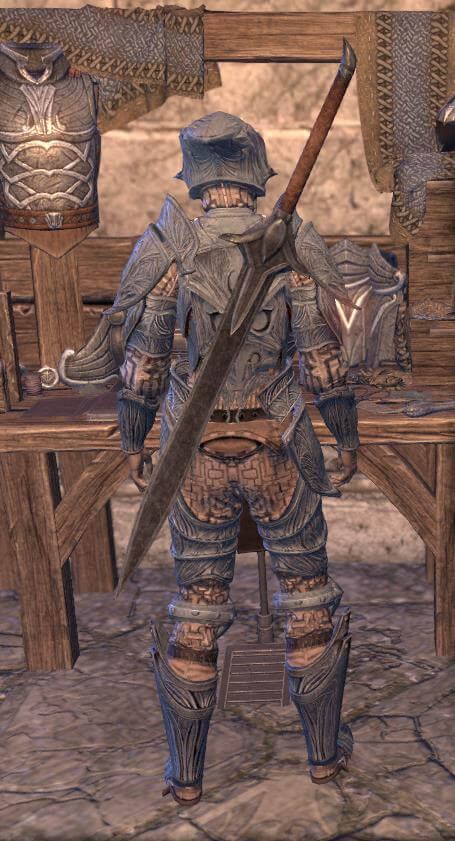 Trade makes the world go 'round, and in trade, reputation is everything, so maintaining House Hlaalu's reputation for reliability it is critical to our continued pre-eminence in mercantile affairs. The arms and armor of our House guards and marines must adhere to strict standards in quality and appearance, exemplifying that dependability expected from us by our trading partners. Where possible, we adorn our items with the stylized merchant-scale sigil that symbolizes the source of our power.

The Hlaalu axe has a single heavy curved blade, backed on the opposite side of the haft by a narrow spike for grabbing opponents or punching through their armor. For parrying purposes, most of the haft is sheathed in a cylinder of metal, and there is a heavy, pointed ferrule at the base.

Our belts are made of double-tanned guar hide, strong and thick, to support tassets, weapons, and of course money pouches. The buckle in front may display a Hlaalu House symbol or a personal family crest

Our boots are rather heavy, and though narrow below, they widen as they rise up the shins toward the knee. Toes are steel-shod except in the lightest armors, shin plating extends around the back of the leg to protect against hamstringing

Hlaalu House bows are made of imported ash or yew wood, which is superior for this purpose to our native funguswoods. Quivers are of guar leather, adorned with our House symbol, the long double-scales version.

Hlaalu cuirasses are constructed of overlapping plates of traditional worked bonemold, or of metal plates cast to resemble bonemold. The House scales-symbol is prominently displayed on the chest and abdomen.

Our daggers are primarily parrying weapons, double-edged, broad and straight, with that distinctive curve-hooked tip design they share with Hlaalu swords. The wide crossguards resemble the wings of cliff striders, but are edged and pointed for backhand attacks.

Hlaalu gauntlets are of flexible leather over the fingers and hands, with the forearms and back of the hands protected by flaring plates of bonemold (or metal cast to resemble it). The leather at the fingertips must be supple enough not to impair the rapid counting of coins.

Our House helms (and in light armor, hoods) cover the entire head, with a full face visor for protection against the environmental dangers no matter where our trading takes us. They are of bonemold, or metal crafted to resemble it, bulbous in shape and elongated toward the back of the skull to protect the traditional cranial coin stash.

Hlaalu cuisses and jambes are constructed of flaring bonemold (or bonemoldesque) plates, protecting the legs at front, sides, and rear. Knee poleyns may display the House scale symbol or personal family crest.

The Hlaalu mace is tipped with a trio of curved flanges, heavy for crushing and edged for slashing. As with the axes, mace hafts are sheathed in metal for most of their length to enable parrying, and footed with heavy, pointed ferrules.

The large, kite-shaped Hlaalu shield was traditionally crafted of bonemold, but these days is just as often made of metal plated over funguswood. Our bold House scales-symbol is prominently displayed on the front.

Hlaalu pauldrons are constructed of overlapping triangular bonemold or bonemoldesque plates, flaring at the top to help protect the side of the neck. Their designs may be abstract, or inscribed with House symbols.

A Hlaalu mage's spell staff sports a finial in the shape of our Hose double-scales symbol, proudly displaying the wielder's affiliation with the world-famous Morrowind mercantile masters. The foot is sheathed in metal, with a heavy ferrule, and can serve as defensive weaponry at need.

The Hlaalu swords are long and straight, like our reputation for fair dealing, and double-edged, like our contracts. They sport the distinctive curve-hooked tip design they share with Hlaalu daggers. The quillions resemble broad wings that protect the hands of the wielders.