Ebony Style is a craftable armor and weapon style in Elder Scrolls Online. Dropped Weapons and Armor. This Style is divided into several motif book chapters: one for each weapon type and one for each armor piece.

Where to get Ebony Motif

Chapters or the entire book is purchasable from Rolis Hlaalu (Note that you need to use Writ Vouchers.) 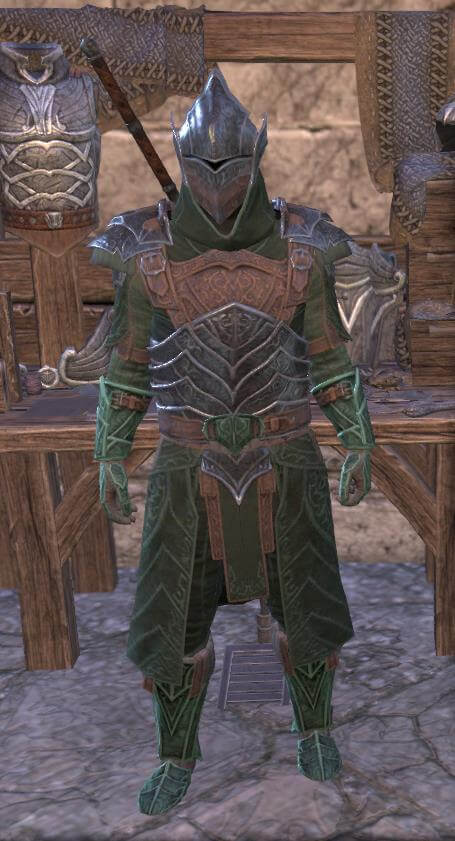 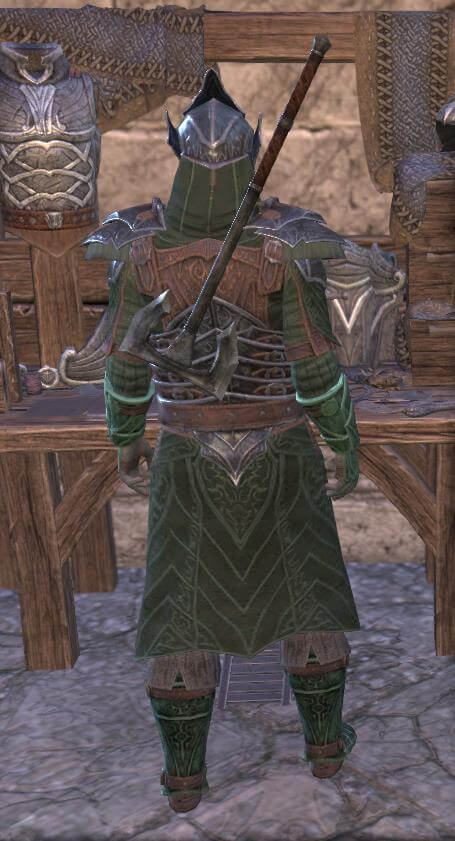 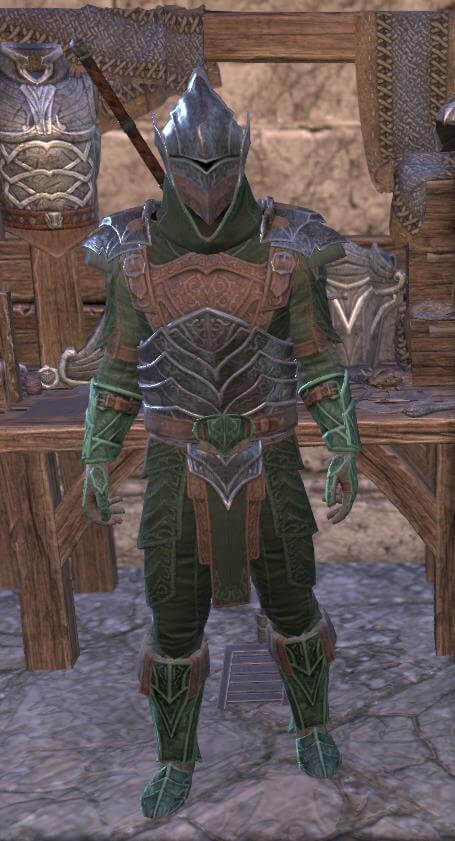 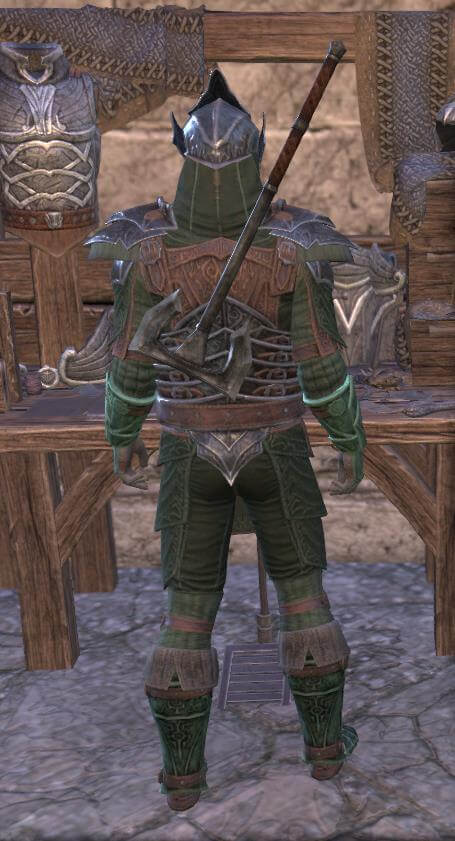 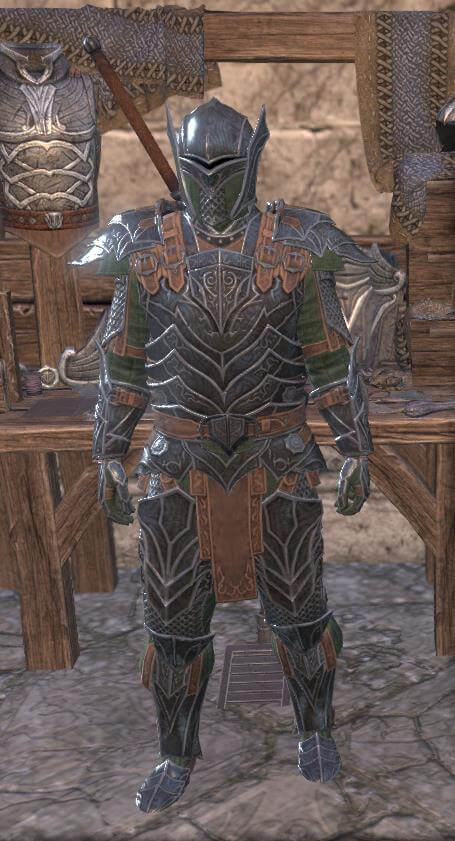 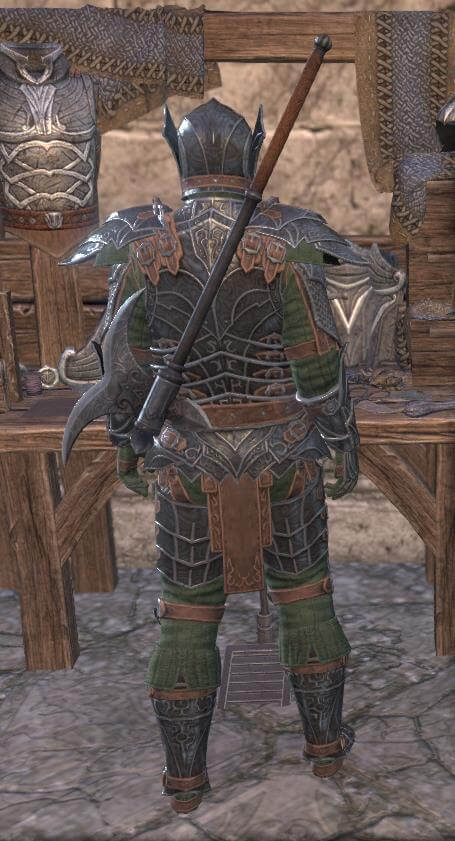 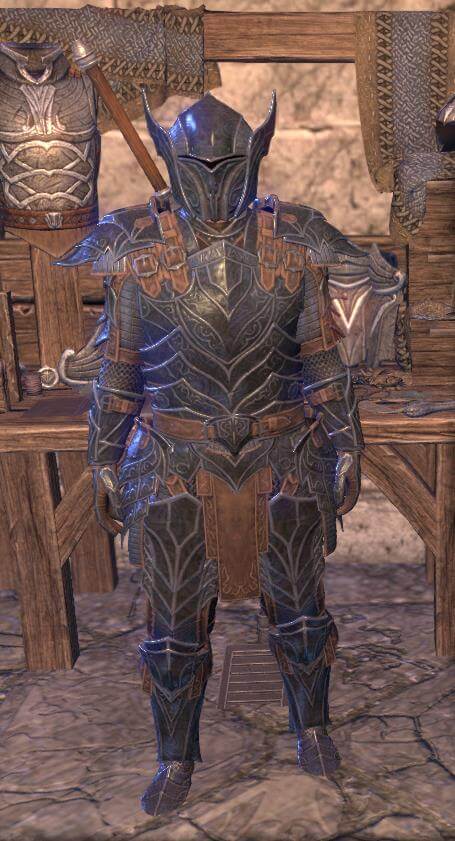 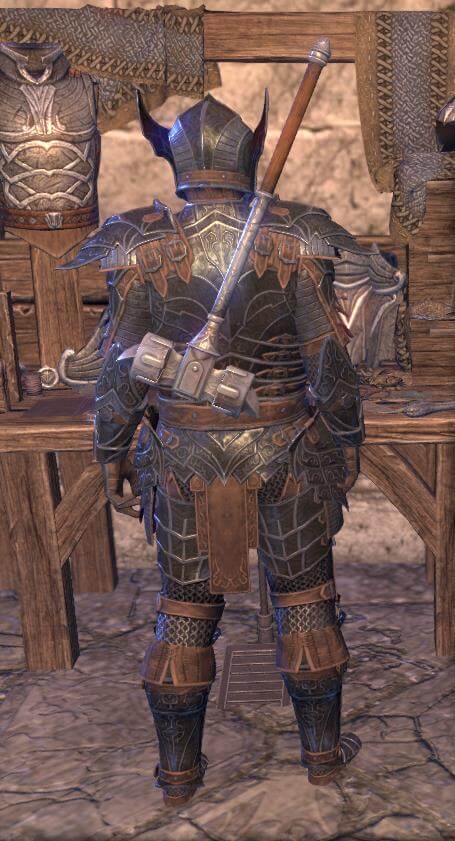 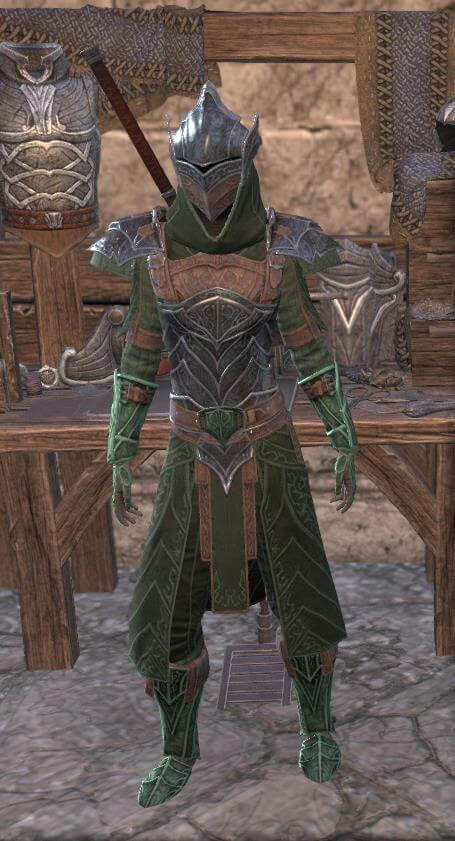 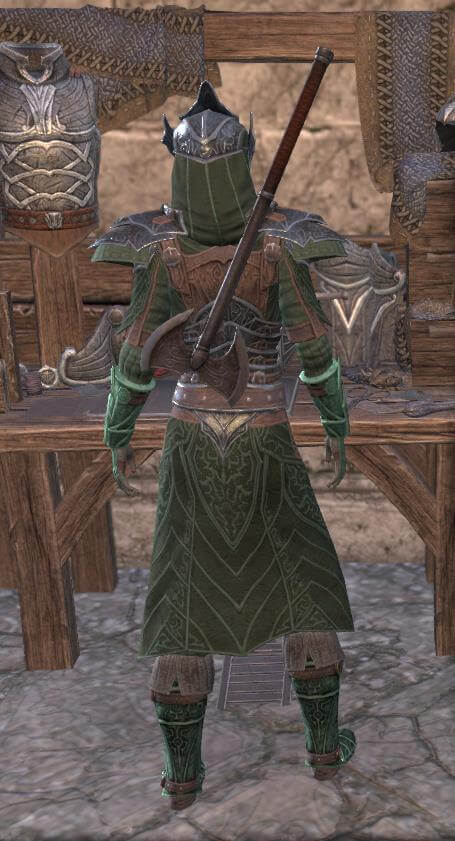 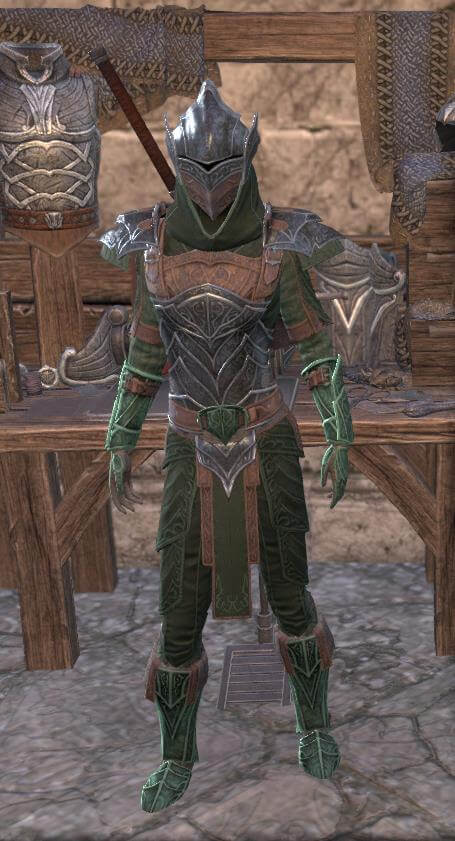 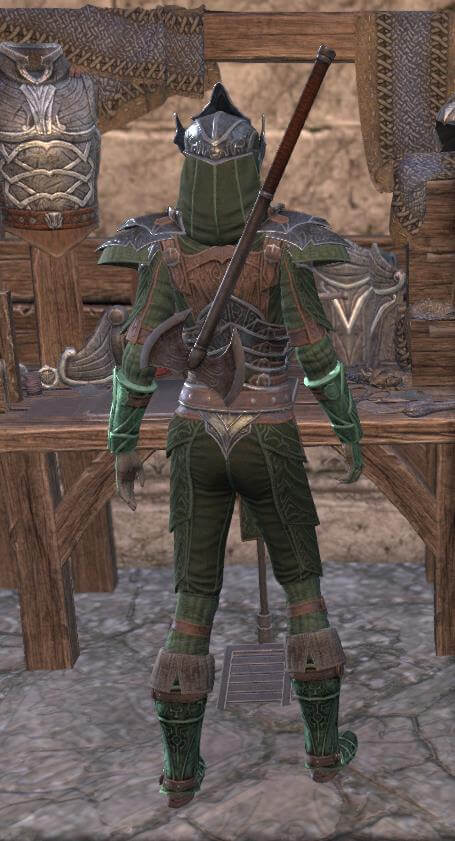 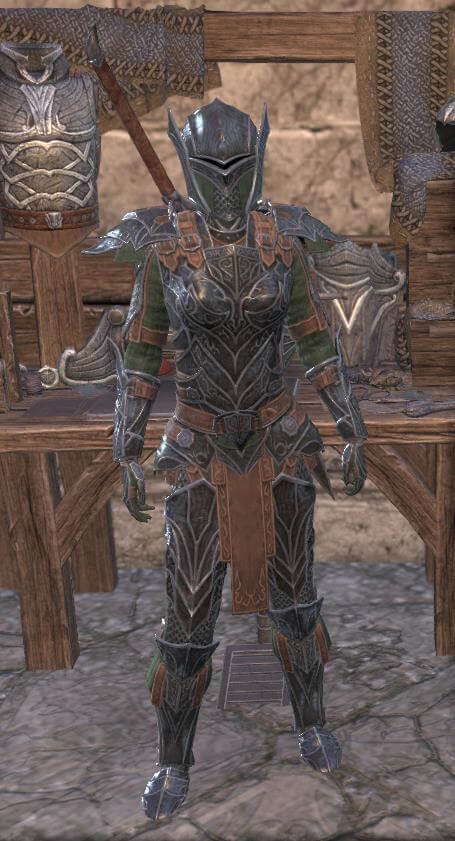 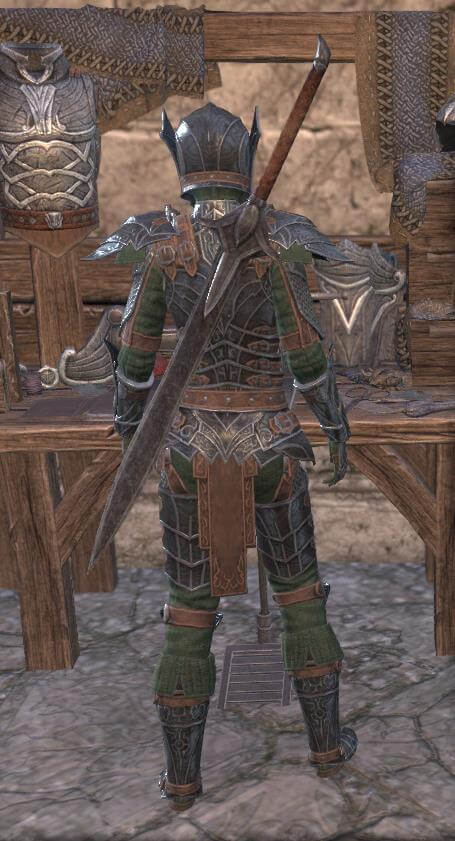 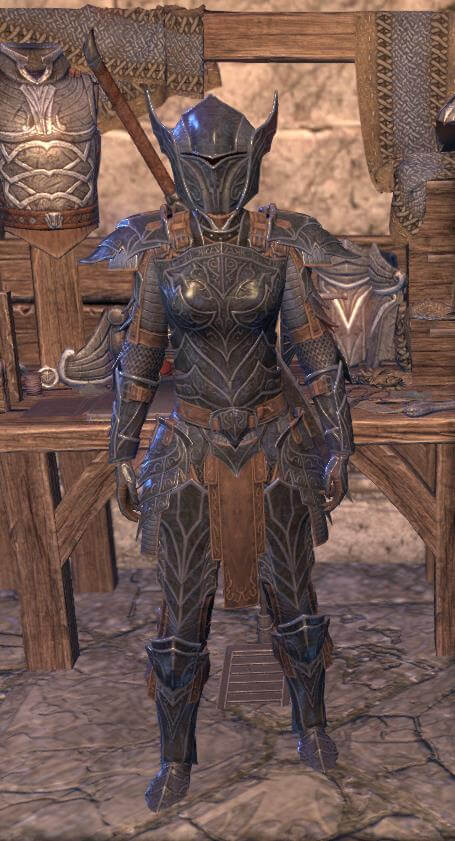 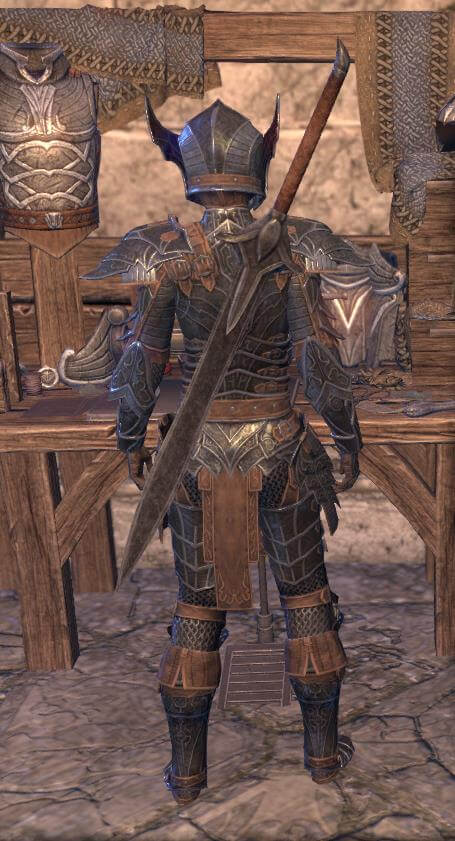 The Ebony style of arms and armor: so striking, so strange, so distinctive that there's no mistaking it. But how are we to account for its bizarre admixture of stylistic forms, Dunmer, Nord, and even Daedric? Where does it come from, and who established it? I have spent years seeking the answers to these questions, and all I have for my pains are a few names and terms that may (or may not) apply. Mackkan. Caldera. Fickledire. "Glorious Upheaval." I wish I knew what these words mean, but I do not. I only know that the Ebony style is ancient, and can be defined as described below.

The Ebony-style axe is notable for its oversized single blade, twice as long below the axle as above it. There is a spike opposite the blade, and another one, curved, at the ferrule.

The Ebony belt is surprisingly simple, considering how ornate the rest of the armor set can be. It's constructed of black leather with metal rivets, and a shield-shaped buckle at the front.

The boots of Ebony armor are articulated metal sabatons, with overlapping chevron-shaped plates similar to those on other pieces of the set. The toes are pointed, but the heels are flat, and can be equipped with spurs.

The Ebony bow is of heavy compound composition, dark springy hardwoods faced with ebony in the set's chevron pattern. It features inward-curving metal spikes above and below the central grip. The quiver, in contrast, is of supple black leather, holding arrows whose points have a slight, wicked curve.

The cuirass is constructed of overlapping ebony plates atop leather or chainmail, articulated so the wearer can bend freely. The breastplate is shield-shaped, above double-chevron bands that protect the abdomen. They may be embossed with jagged flame symbols of Daedric inspiration.

The Ebony dagger has a long, slender blade with a slight S-curve to it, reminiscent of the dark rocky Coldharbour spikes that accompany incursions of the Planemeld. Its crossguard is minimal: it's a dagger for thrusting, not parrying.

Ebony gauntlets are of black leather with thin, articulated plates protecting the backs of the hand and fingers. Pointed metal flanges protect the forearms on the heavier variations.

Ebony helms resemble those worn by Dremora, with full visors, crests, and flaring wing-shaped prongs over the ears. The eye-slits are narrow and deliberately sinister in aspect.

The greaves are constructed to the same design as the rest of the armor set, with overlapping chevron-shaped plates, and shield-shaped poleyns at the knees.

The Ebony warhammer is a decidedly nasty affair, with a heavy flanged head and a curved back spike. The haft is partly sheathed in metal for parrying purposes, while the ferrule sports the same curved spike seen on the bottom of the axe handles.

The pauldrons on Ebony armor are sharp and shield-shaped, with an extra chevron-shaped plate flaring out over the upper arms. There is a layer of thick leather, or even chainmail, beneath the over-plates.

Compared to the ornate detailing on the armor, Ebony spell staves are relatively simple in design, consisting of a shaft of dark hardwood, sheathed in metal toward the top, with a finial of down-flaring crescent wings. The ferrule is equipped with the same curved spike as other hafted Ebony weapons.

Ebony-style swords are definitely Daedric in inspiration, with crinkled, asymmetrical handles topped by twisted guards, from which sprout single-edged blades with disturbing curves. The sides of the blades are etched with runes that, though traditional to the Ebony style, are of unknown origin.