Buoyant Armiger Style is a craftable armor and weapon style in Elder Scrolls Online. This Style is divided into several motif book chapters: one for each weapon type and one for each armor piece

Where to get Buoyant Armiger Motif

Chapters can be found in treasure chests around Vvardenfell, as well as from Fabricant's Burnished Coffer or Fabricant's Shining Coffer, awarded once a week for completing the weekly quest Forging the Future. 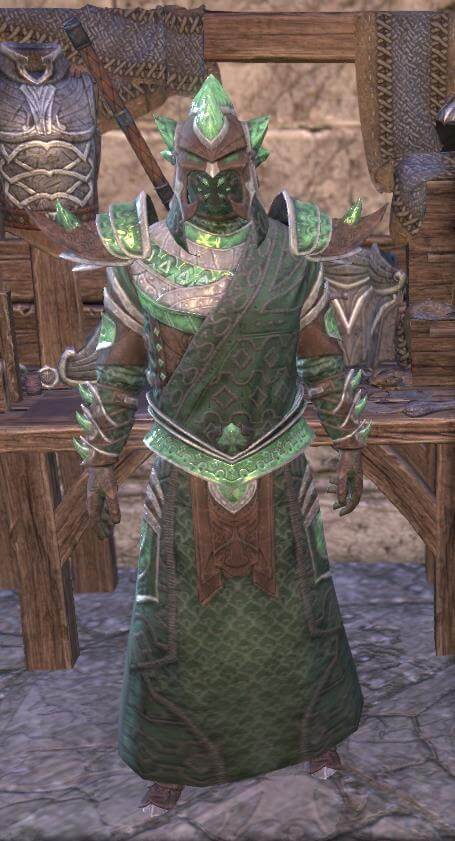 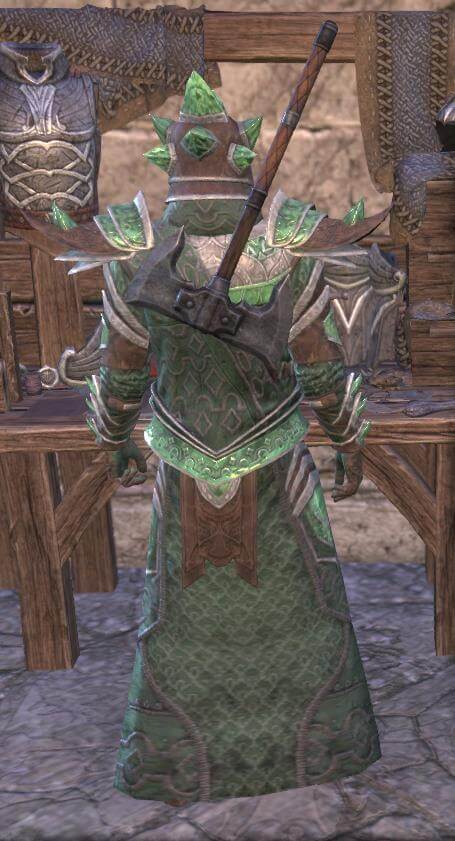 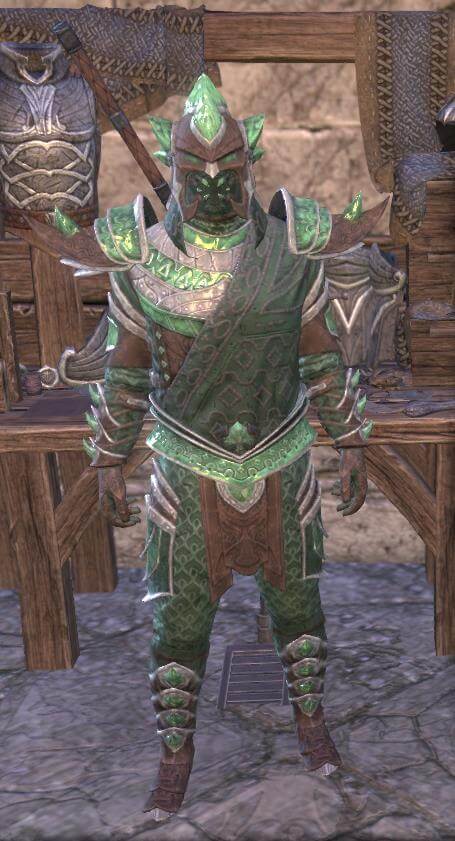 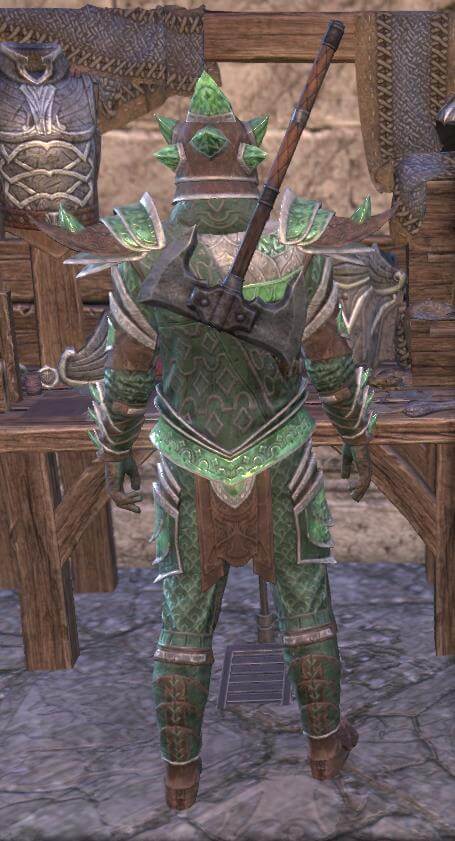 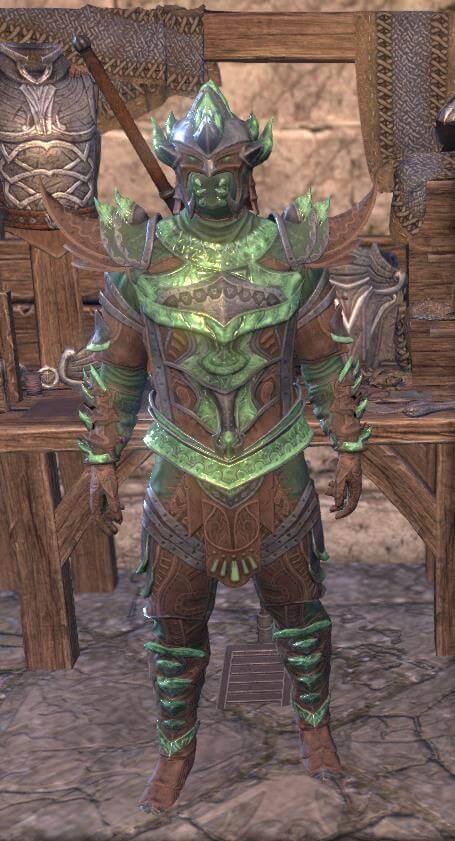 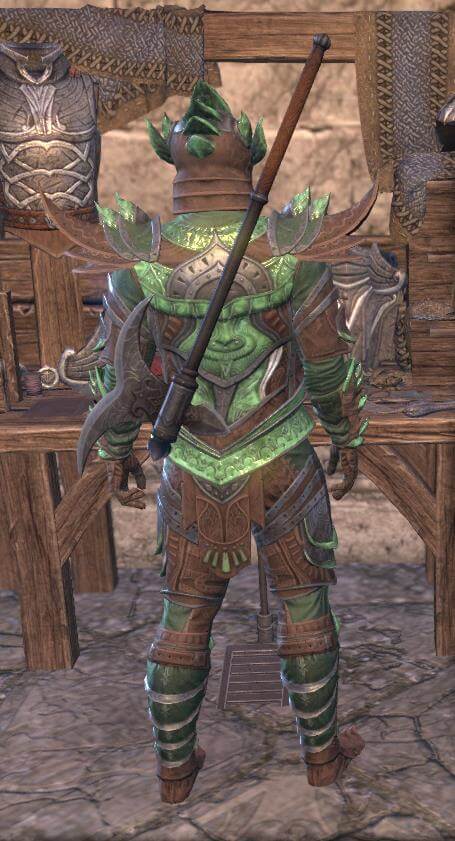 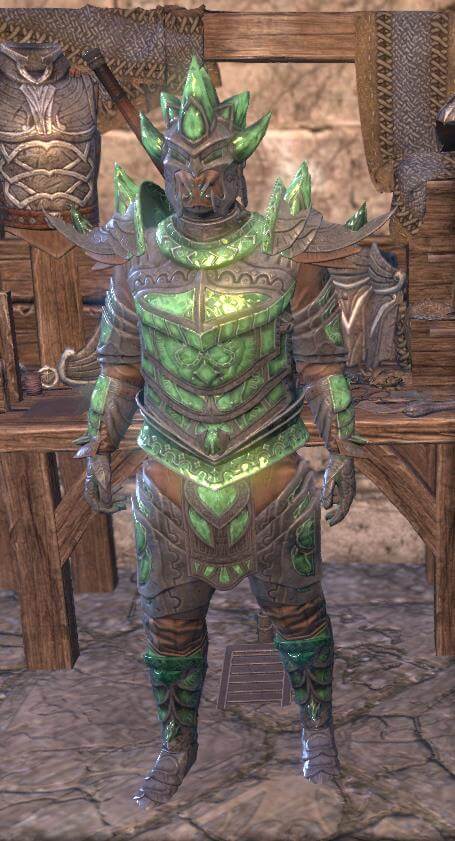 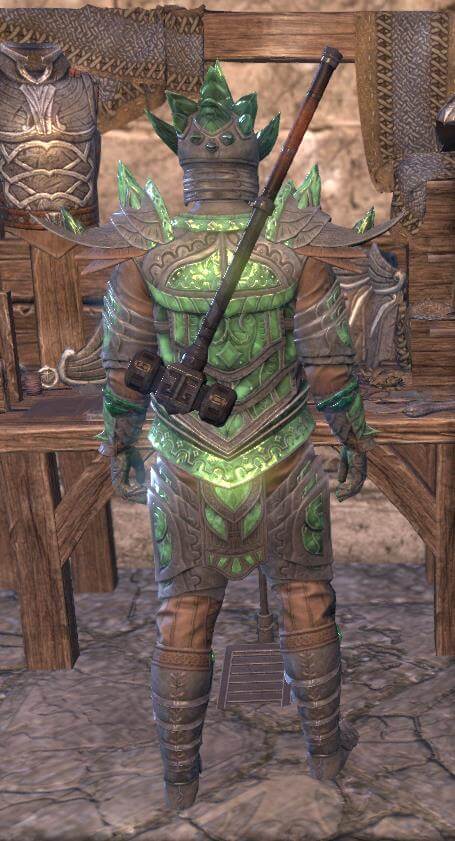 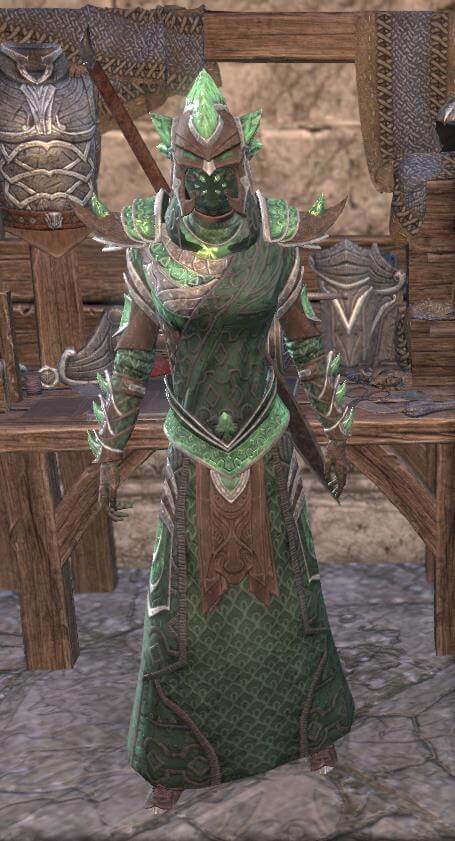 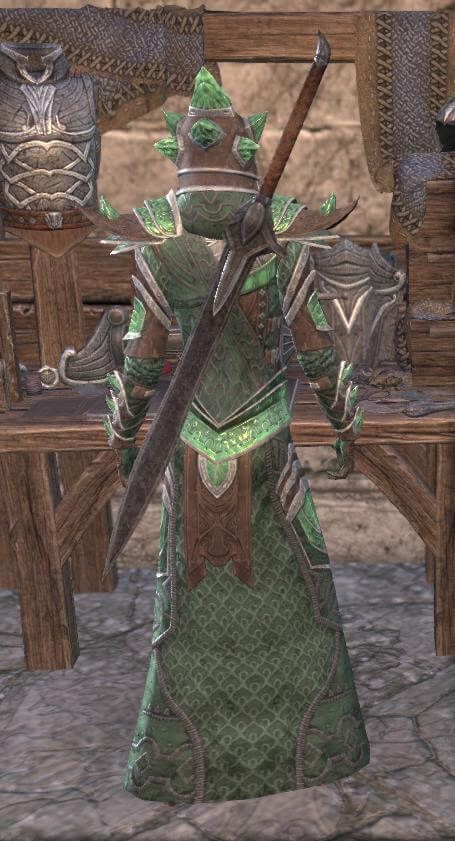 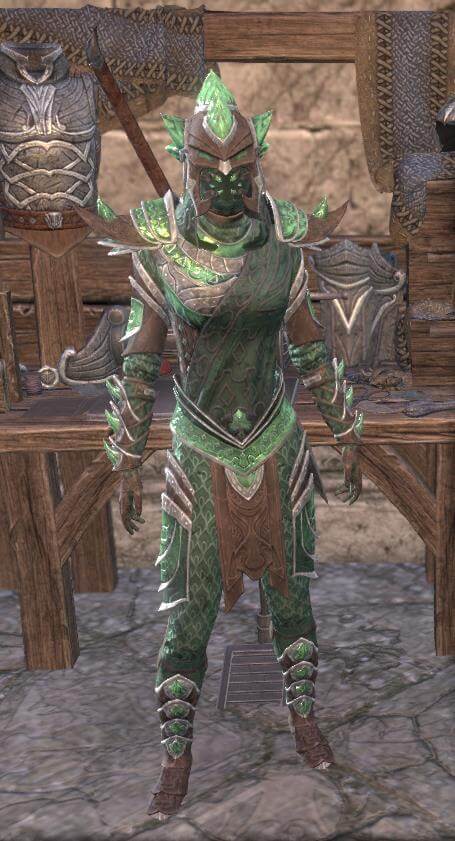 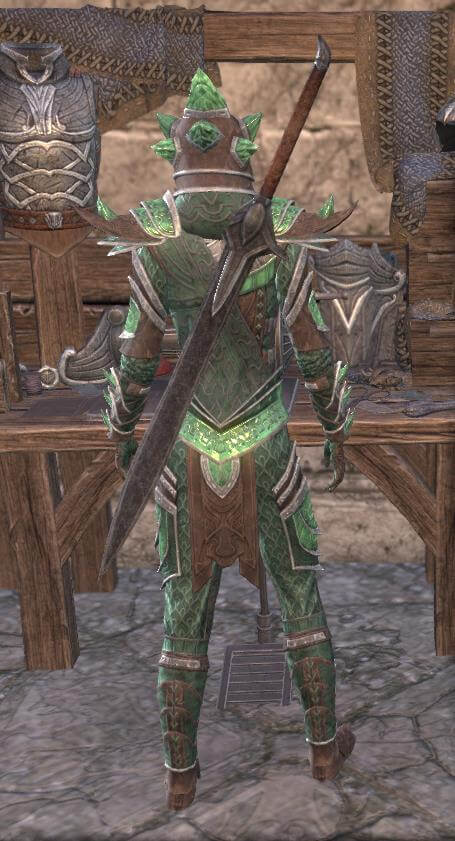 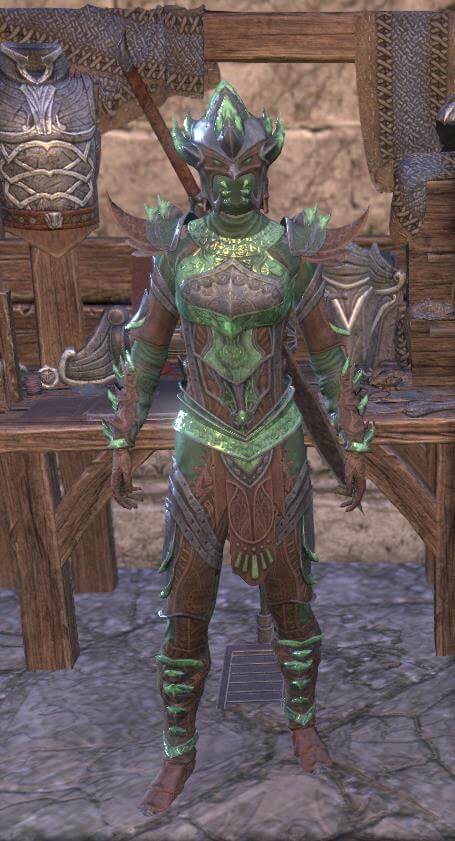 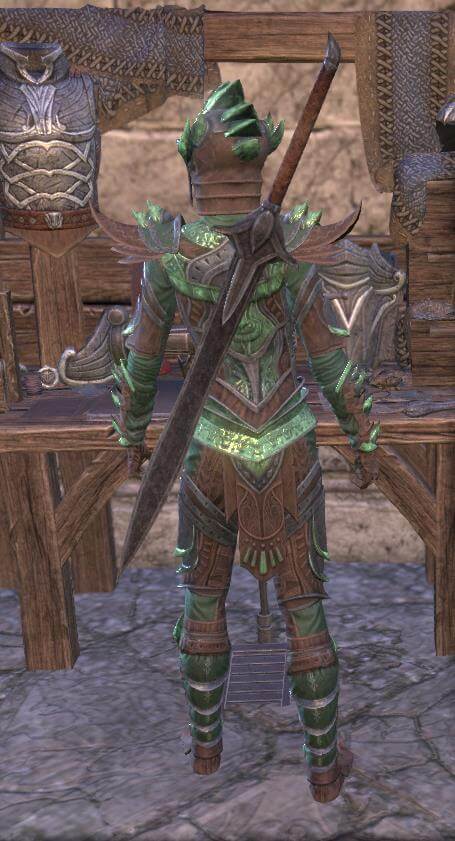 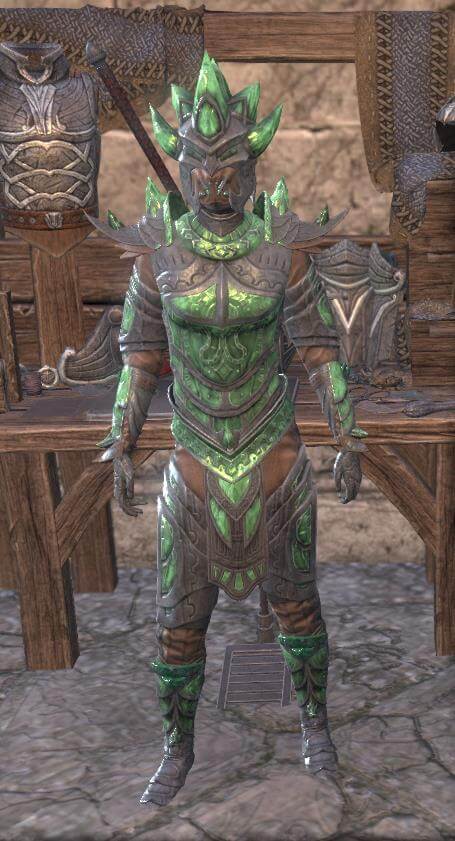 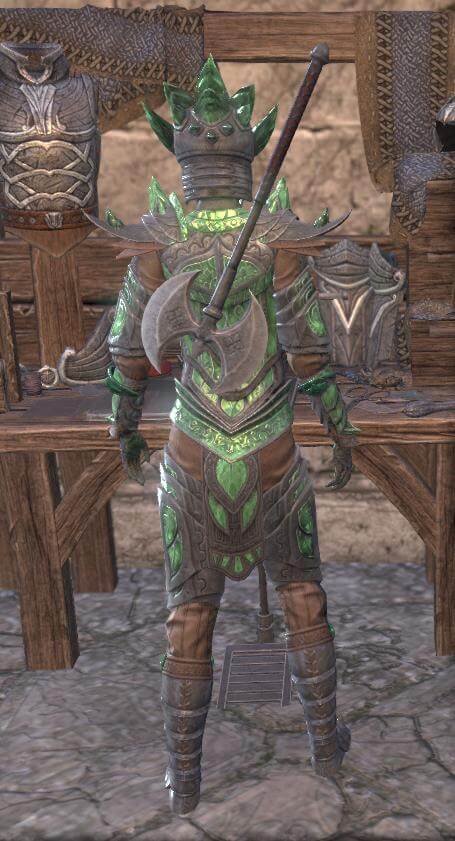 Vivec smiled at those brave souls around him and summoned celebration demons to cleave unto the victors. There was a great
display of love and duty around the netted monster, and Vivec was at the center with a headdress made of mating bones. He laughed and told mystical jokes and made the heads of the three houses marry and become a new order. ""You shall forever be now my Buoyant Armigers,"" he said.

"So to quiet his mind the Hortator chose from the Fight Racks an axe. He named it and moved on to the first
moon."" And the edge of the blade of the axe of the Armiger shall be rippled like a hanging curtain, a tapestry for cutting.

""A scavenger cannot acquire a silk sash and expect to discover the greater systems of its predecessor: perfect
happiness is embraced only by the weeping."" And the belt of the tassets and the arms of the Armiger shall be fore and aft a chevron, and descend in the places of generation.

""Six are the walking ways, from enigma to enemy to teacher."" And the boots of the walking feet of the Armiger
shall have rigid uppers and spines, like a dreugh that clothes the pedal appendage.

""Out of their fortresses they came with golden ballistae that walked and mighty atronachs and things that spat
flame and things that made killing songs."" To afflict enemies from afar with singing darts, the Armiger must have a bow of chitin and verdigris, doubly recurved.

""The mystics began by wrapping one of their sages in the shells, a series of flourishes by two supra
numerates, one hormonally tall and the other just under his arms."" The carapace of the cuirass is a sacred shell to contain the Armiger's soft hot heart of truth, as the volcano contains the lava.

""At which he stabbed the heart of City-Face with the Ethos Knife, which is to say RKHT AI AE ALTADOON AI, the
short blade of proper commerce."" And the Armiger's blade shall be green as a leaf, but sharp and supple as a thorn that pierces between the sixth and seventh rib of eventuality.

""'For I have crushed a world with my left hand,' he will say, 'but in my right hand is how it could have won
against me.'"" And the gauntlets that house the Armiger's digits shall grasp and hold like sharp-shelled lampreys, but cleansed of all ordure.

""CHEMUA, the Running Hunger, who appeared as a mounted soldier with full helm, had the powers of Heart
Roaring and of sky sickening."" And who shall be crowned like the Buoyant Armiger, with verdant flares of solid flame?

""He sat with his legs in the ocean and with a troubled look on his face."" And the greaves and cuisses of
the Armiger shall be like pillars and columns of manifest argument, with heavenward chevrons all akimbo.

""Truth is like my husband: instructed to smash, filled with procedure and noise, hammering, weighty, heaviness
made schematic, lessons learned only by a mace."" And the terrible truncheon the Armiger bears shall be like the scepter of a king unforeseen and unreckoned.

""The ruling king is to stand against me and then before me."" And the shield of the Armiger shall be like the
shell of the Emperor, for what is a monarch but a shield to his people?

""The ruling king is armored head to toe in brilliant flame."" And the shoulders of an Armiger shall
flare up and out like a blazon of fire, broad-bearing the burden of bastion against the words-like-knives.

""He attempted to attach them and form a staff but Vivec would not let him, saying, 'It is not the time for
that.'"" And thus the spell staff of the Armiger Magical shall be shaft-singular, and speak only contradictions.