Pyandonean Style is a craftable armor and weapon style in Elder Scrolls Online. This Style is divided into several motif book chapters: one for each weapon type and one for each armor piece

Where to get Pyandonean Motif

Chapters can be purchased using Crown Gems and obtainable from Crown Crates, from Psijic Vault Crates or fishing for Pyandonean Bottle in Summerset. 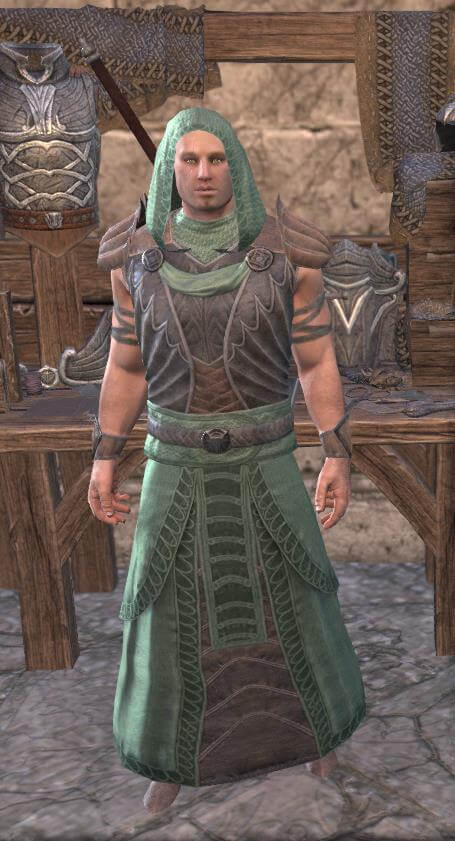 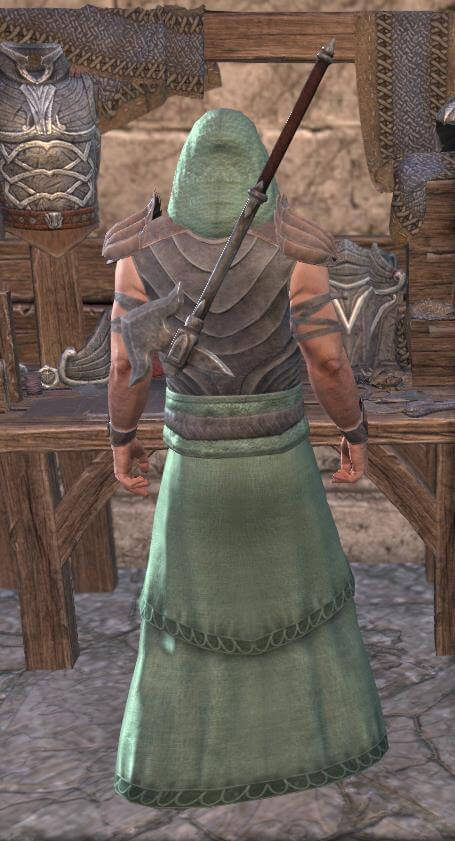 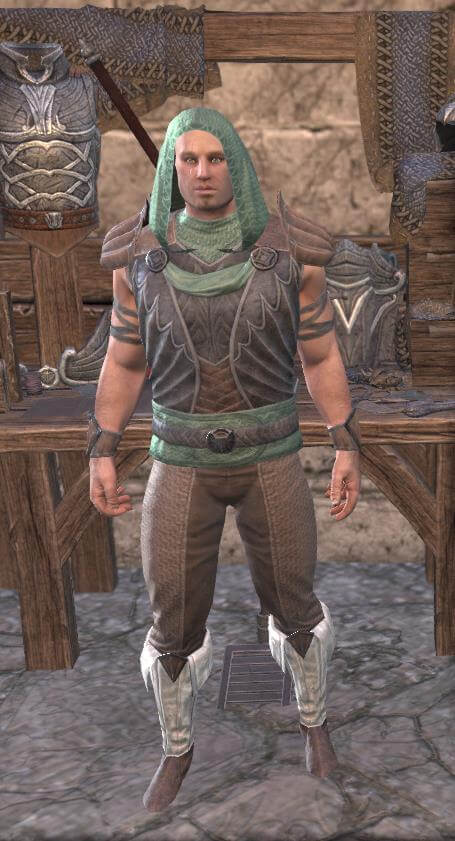 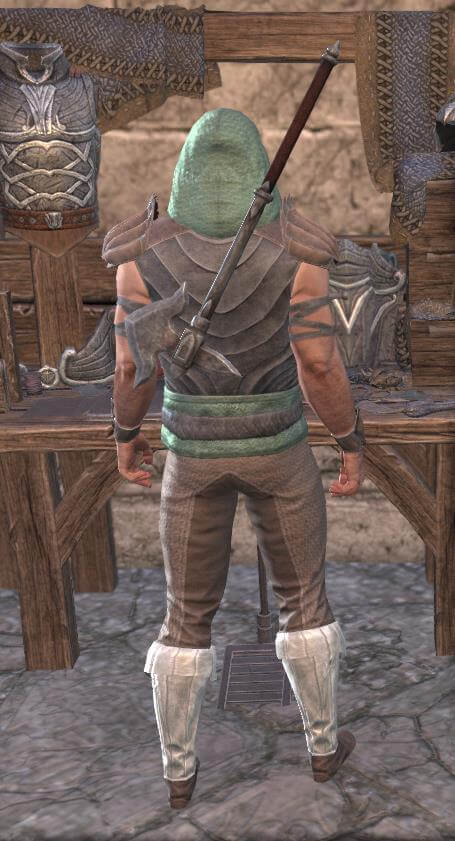 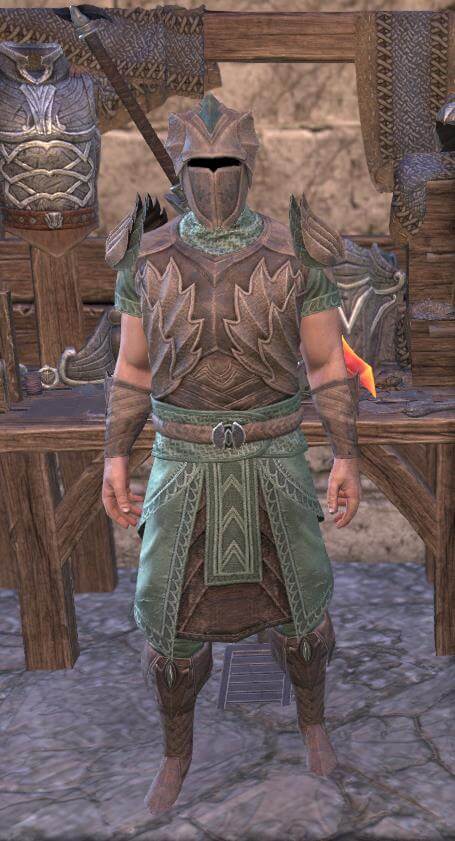 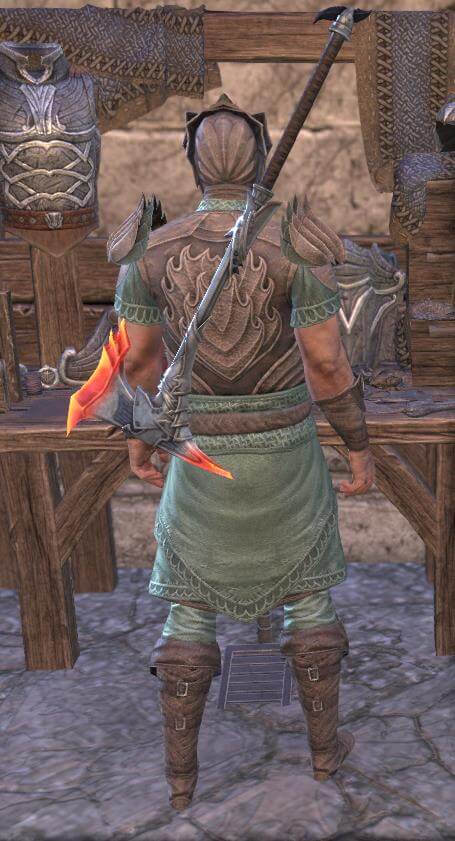 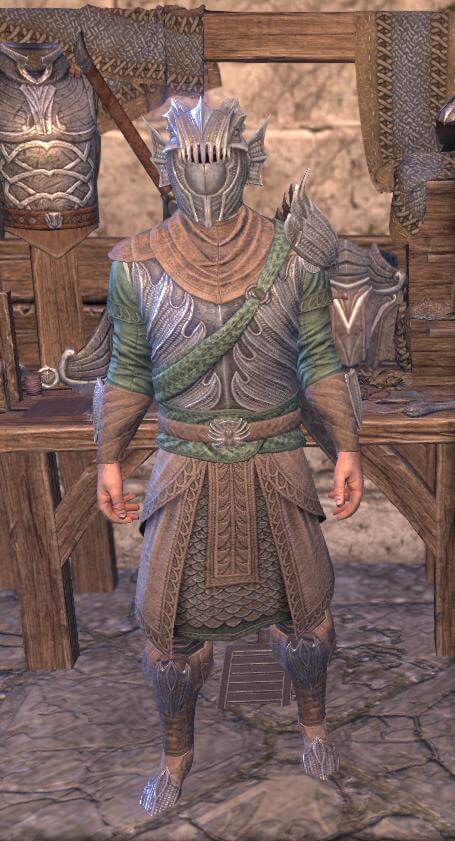 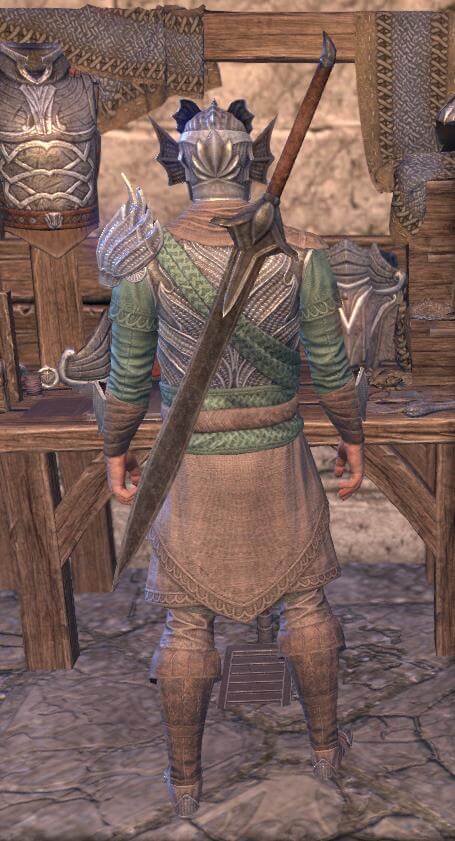 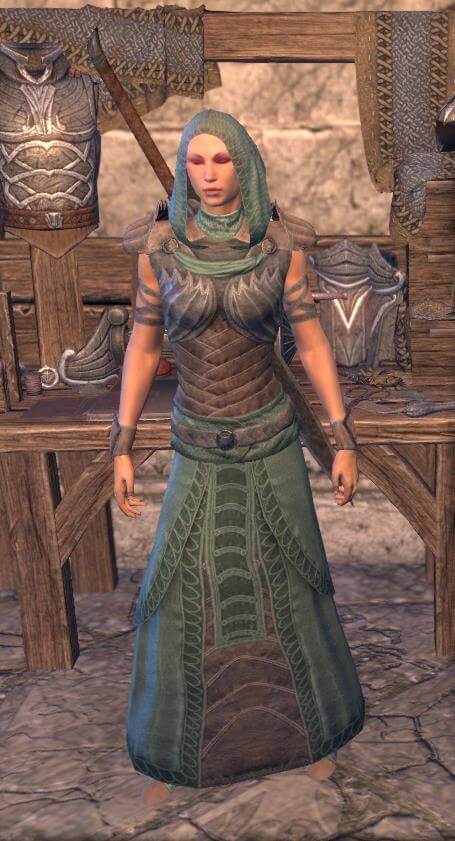 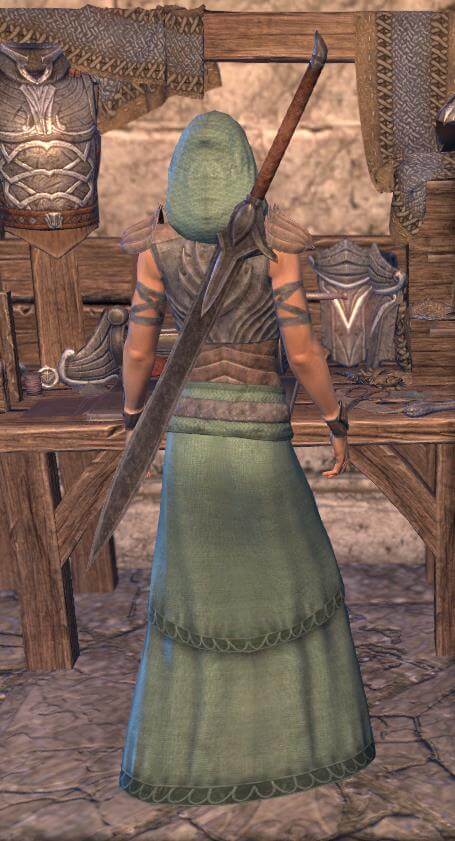 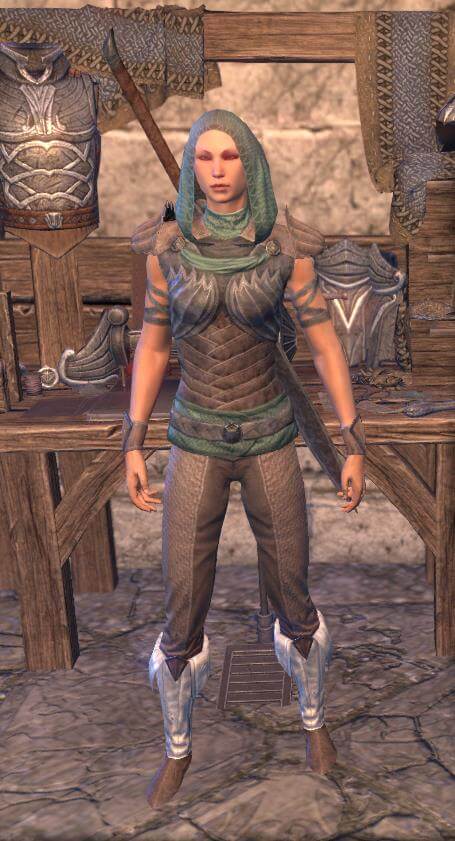 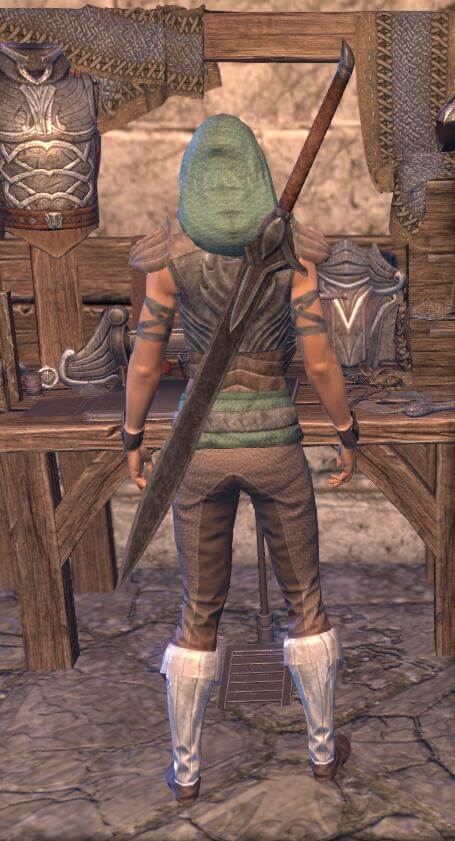 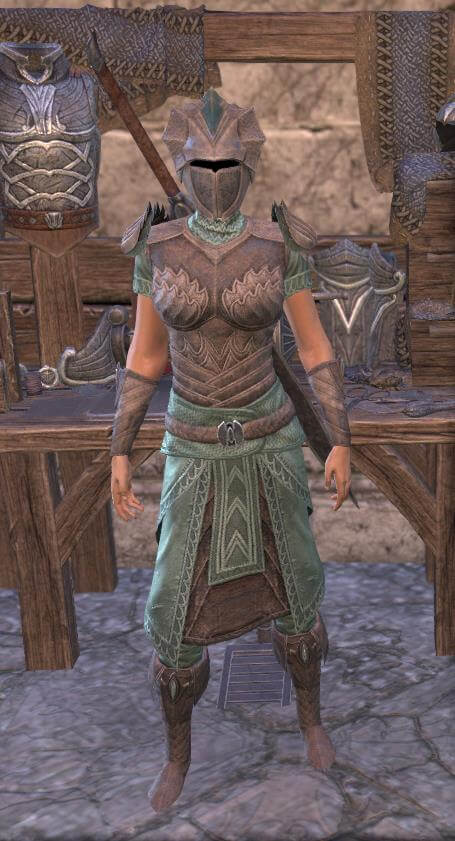 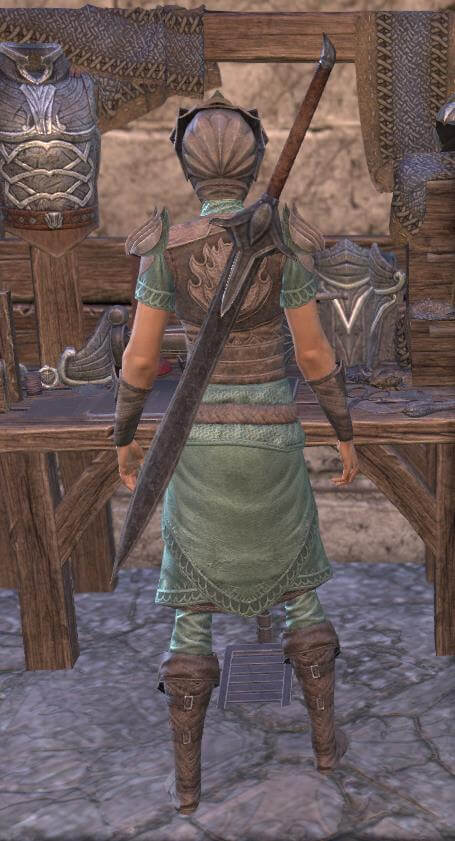 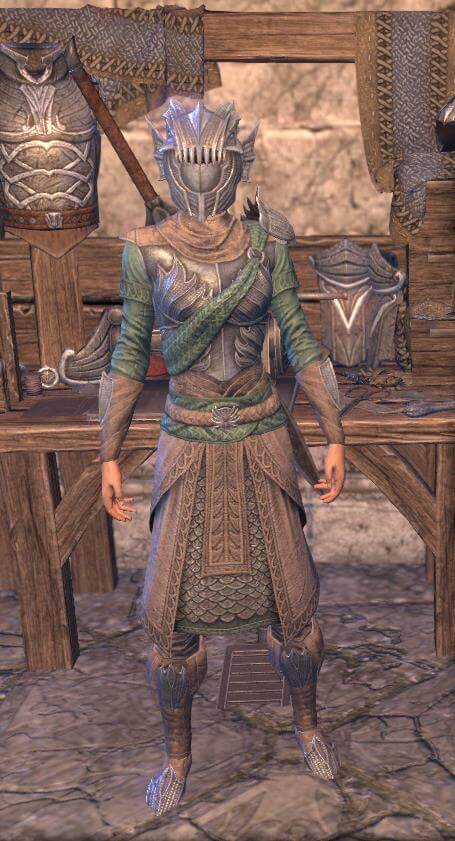 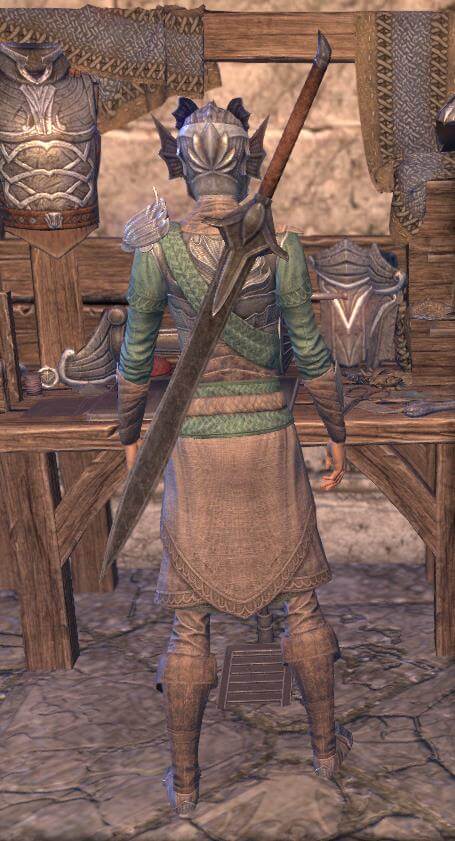 Some of my peers dismiss our nautical neighbors the Maormer as mere Elven pirates, seafaring bandits with no more sophistication than Gold Coast highway robbers, but this is a mistake: though over time some breakaway clans have descended into near-barbarism, the core clans loyal to King Orgnum are organized and well-disciplined martial forces it would be a mistake to underestimate. I will try below to describe their typical arms and armor turnout.

Pyandonean axes are double-bladed, even the one-handed weapons, great edged crescents like the wings of rays. They sport a shell motif where the tang goes into the haft, which features an edged and pointed ferrule at its base. For their size, the weapons are marvelously light, a hallmark of Sea Elf design.

Pyandonean belts are made of the same thick, overlapping leather strips as their light and medium armor, and made from the same source: triple-tanned hide of porpoise, creatures the Sea Elves slaughter on sight out of sheer hatred for the blissful creatures' exuberance and joy.

In line with the Pyandoneans' obsession with survivability should they end up in the water, their boots are light affairs made of (what else?) porpoise hide, and easily kicked off before they can drag their wounded wearers down into the depths.

Sea Elf bows are at core simple self bows of Pyandonean yew, though they are often elaborately decorated with sculpted sea serpents wrapping the bow's limbs above and below the grip. Their quivers are fanciful, shaped like great barbed fins, the arrows fletched with seabird plumage.

The armored area of Pyandonean chest pieces is largely confined to protecting the chest, back, and abdomen, with the arms left lightly covered or free to enable swimming. (Note to self: do the Sea Elves have a particular fear of drowning? Worth researching.) Light and medium armor are of overlapping strips of porpoise leather, but heavy armor is of orgnium.

Pyandonean daggers exhibit the same scimitar-like curve as their swords, with a barbed hook behind the point that the Sea Elves use to wicked effect in close combat. The cross-guards at the hilt are forged in the shape of the heads of sea serpents, and can be used to trap and even break a blade in parrying.

Gloves inhibit both swimming and climbing in ships' rigging, so they are not popular among the Pyandoneans, whose gauntlets consist mostly of bracers to protect their wearers' forearms.

Like their boots, a key aspect of Pyandonean headgear is that it's easily doffed in the event the wearer goes overboard. The light armor coifs are just hoods, but the medium and heavy helms seem intended to intimidate by presenting a nonhuman visage, either some sort of crustacean or a spiny deep-sea predator.

Though their outfits are usually kilted, underneath them the Pyandonean marine wears greaves of overlapping porpoise leather, tightly wound so as not to interfere with swimming or the climbing of ships' rigging.

In line with the idea that Pyandonean marines' gear shouldn't be heavy enough to drag them under if they go overboard, the heads of their maces are relatively light, relying on points and flanges to do damage rather than bludgeoning weight. They're also comparatively short in the haft.

Pyandonean shields are basically kite-shaped, but smaller than most kite-shaped shields, possibly as a way of mitigating their weight. They're forged of a light but durable metal, with radiant shell designs at top and bottom, and usually depicting at center the raised or embossed figure of a sea serpent.

The shell-shaped Pyandonean pauldrons are constructed of stiffened porpoise-leather often capped by a covering of orgnium, the mysterious light metal the Sea Elves use for their heavier arms and armor. Symbols of rank are typically affixed to shoulder armor for the easy identification of officers.

The finial on top of a Pyandonean staff is, of course, sculpted in the shape of a sea serpent. Curiously, it's made of orgnium, the same light metal used so extensively in Sea Elven armor. Whether it's imbued with magical properties to assist in the focusing of spells is unknown, but seems likely.

Pyandonean swords are curved like scimitars, but with a dogleg just above the quillion, and a barb behind the point that enables the weapon to be used somewhat like a boathook, snagging enemies and dragging them overboard or into off-hand thrusts. They are ornamented rather simply except for the quillions, which take the shape of a two-headed looping sea serpent.