Dwemer Style is an armor and weapon style in Elder Scrolls Online.  This Style is divided into several motif book chapters: one for each weapon type and one for each armor piece.

Where to get Dwarven/Dwemer Motif

Chapters are dropped by dwemer pots and dwemer urns. Found only in Dwemer Ruins. 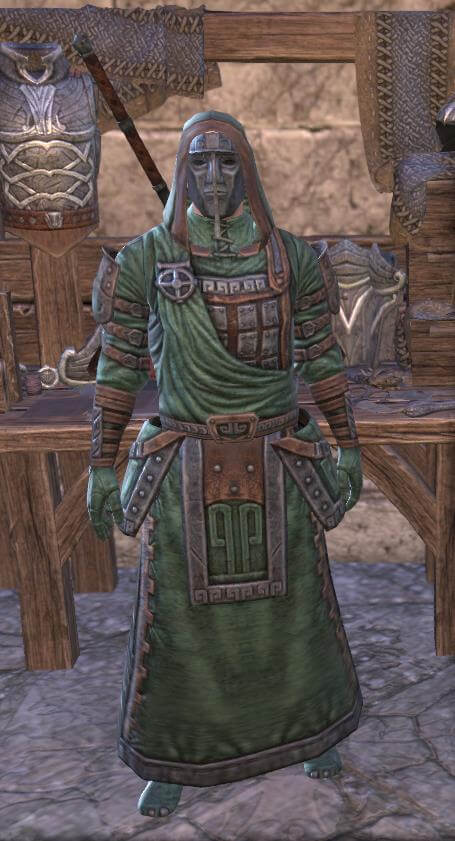 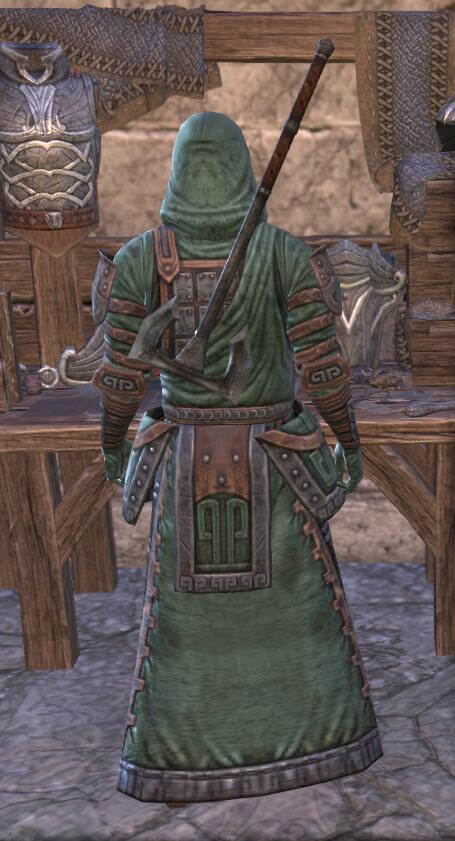 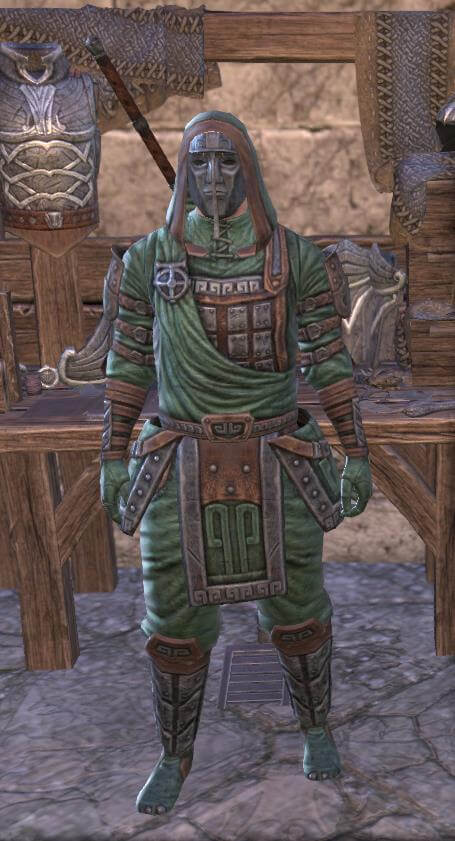 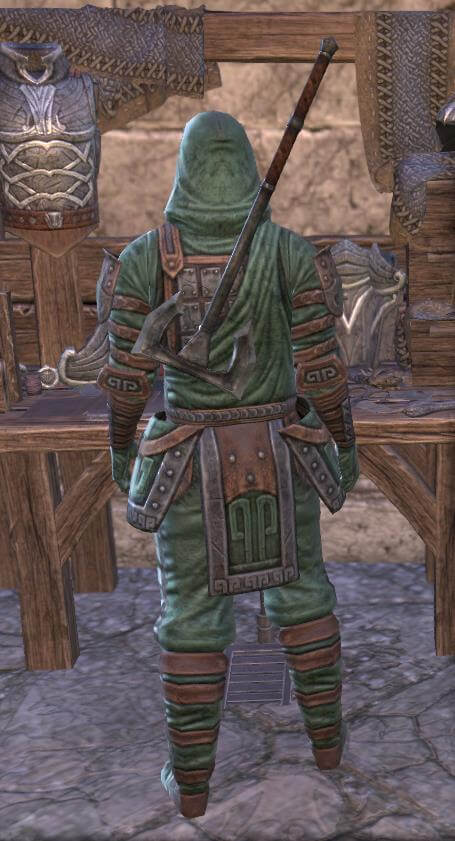 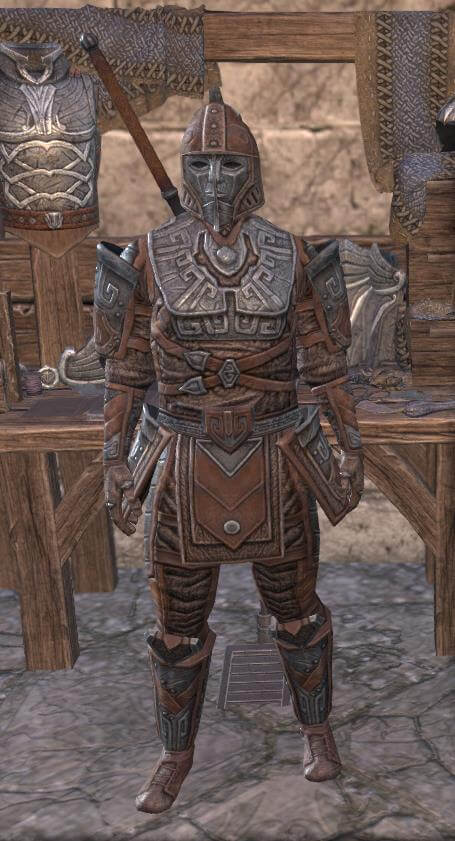 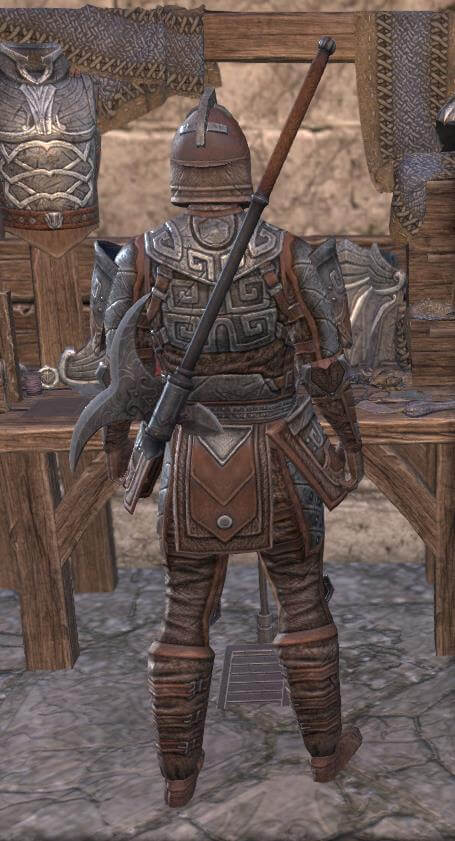 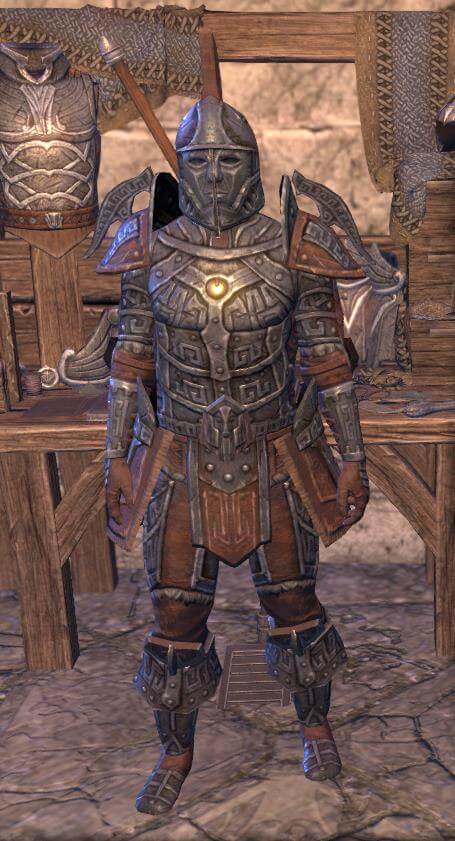 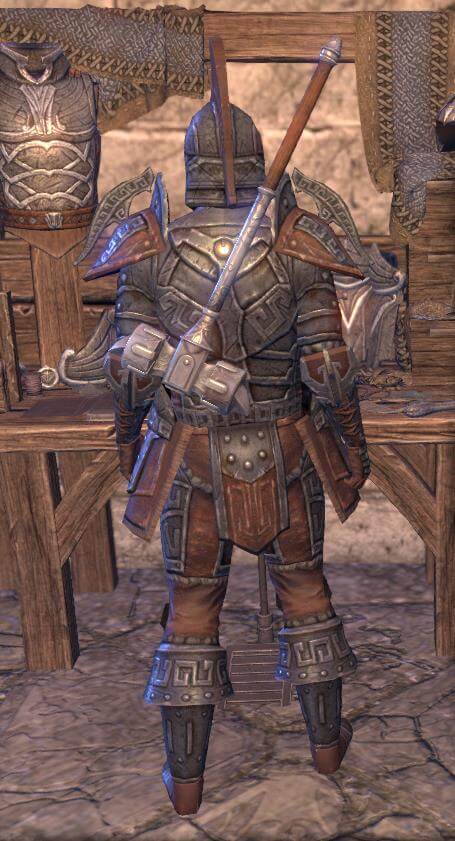 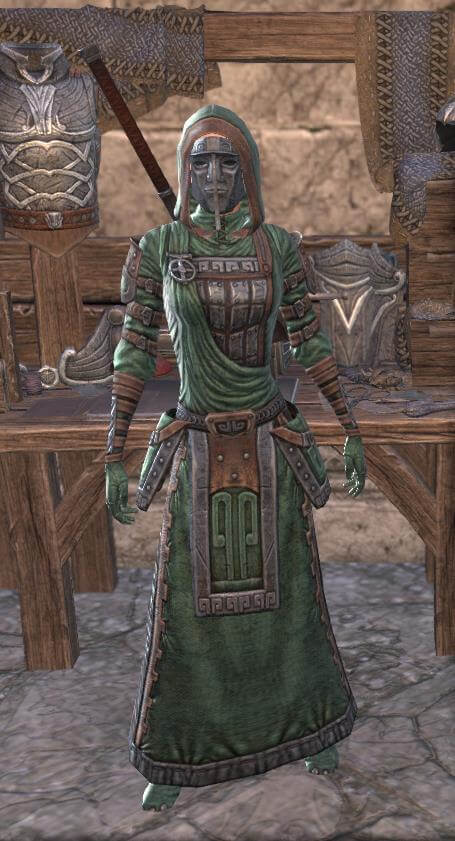 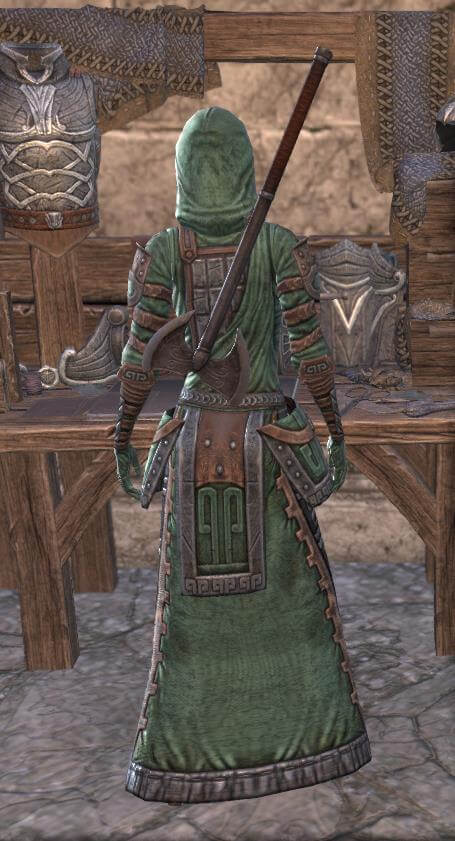 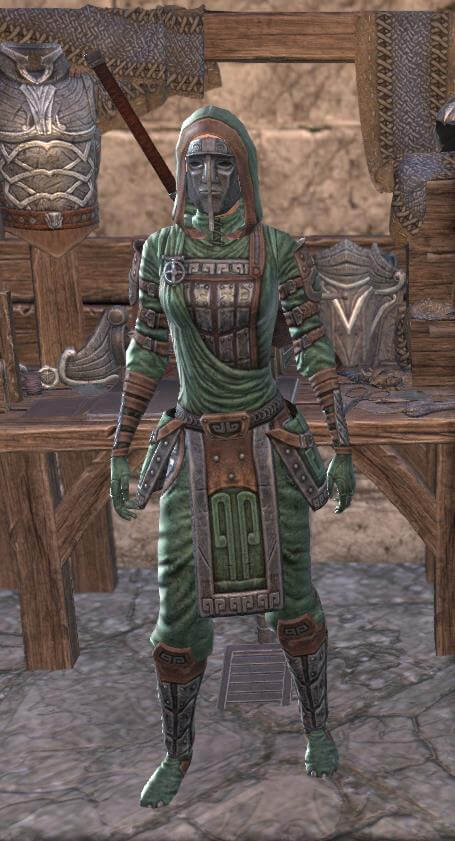 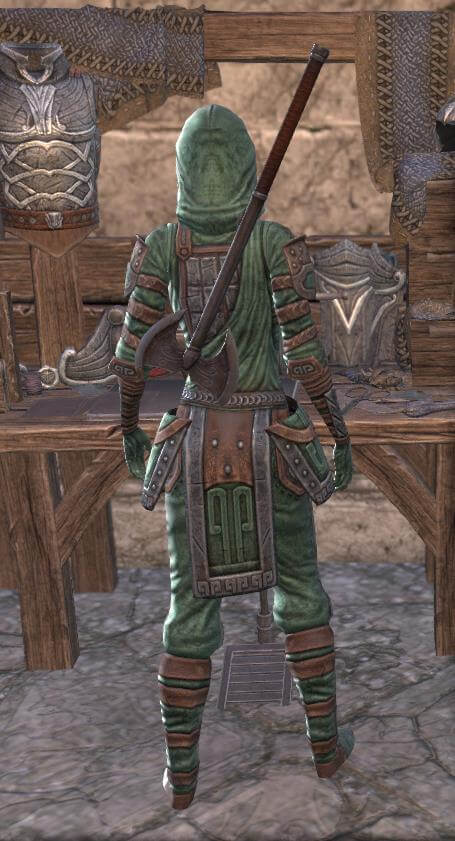 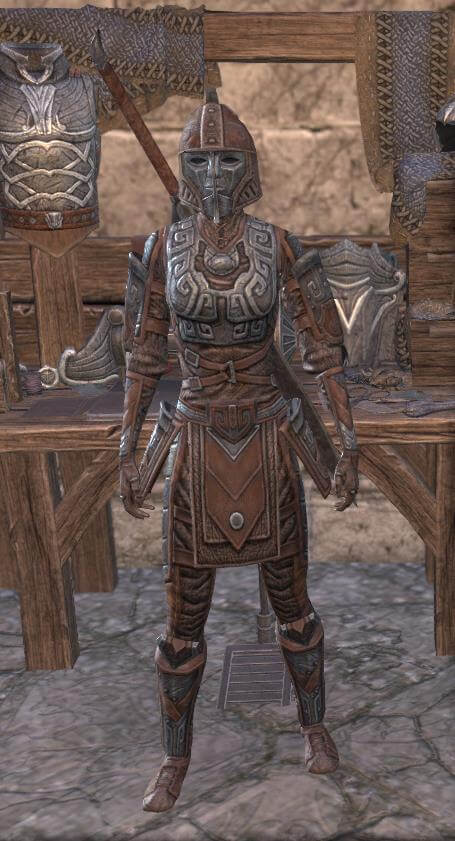 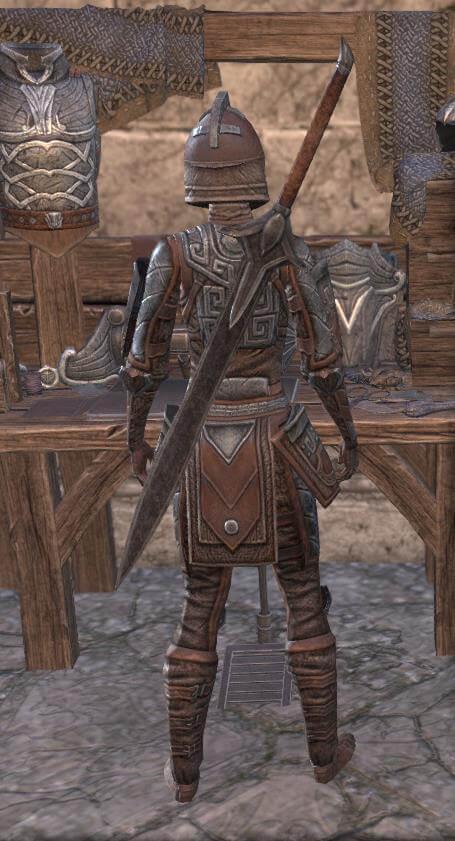 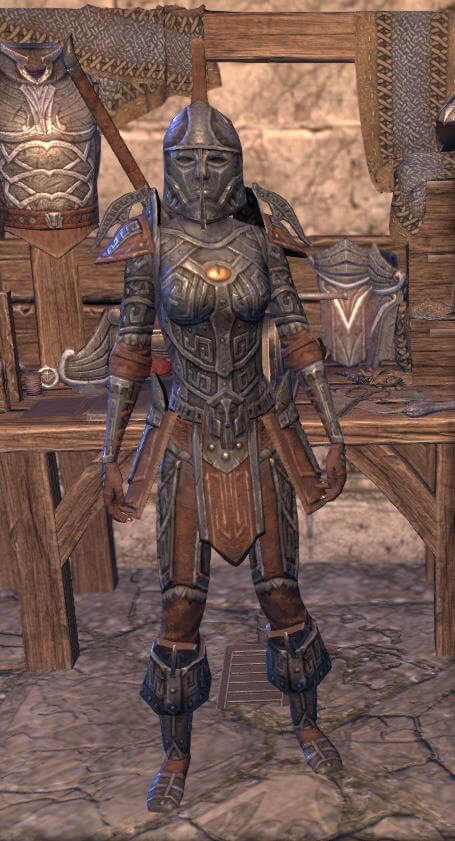 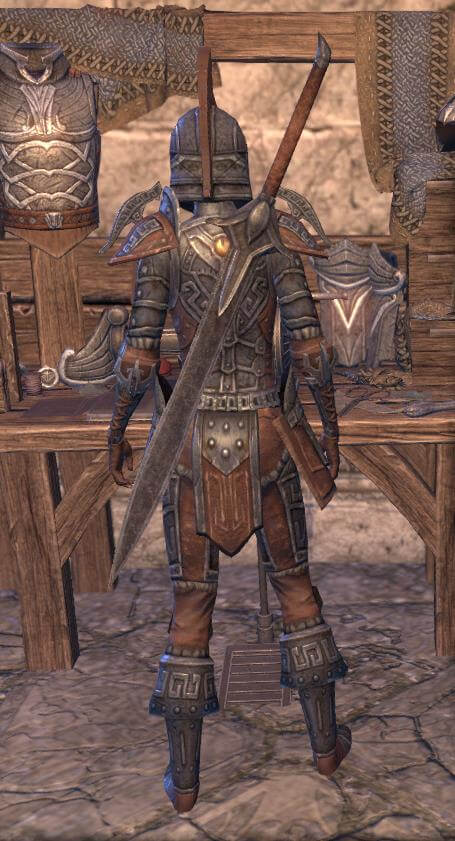 Kireth says I should write down what I've learned about Dwemer artisans and the styles and motifs of their lost civilization.

Dwemeri axe designs reflect the wheels, gears, and cogs that are central to so many devices of the Deep Elves. The haft is surmounted by a round disk resembling the hub of a wheel, from which spokes radiate to the blade or blades, which are like portions of a wheel's outer ring. The blades maintain an edge remarkably well, considering their great age.

Dwarven belts are typically made of overlapping metal links of a repeated geometric shape, such as squares or circles. Their length is easily adjusted by the addition or subtraction of a few links. The tensile strength of such a belt is without peer, many times that of an equivalent length of steel chain.

Dwarven boots are sturdy, but not as heavy as they look. Though they have accents of Dwarven metal, they are mainly constructed of a flexible material that resembles leather, but either it is some sort of manufactured imitation, or the Dwemer had beasts with incredibly smooth and homogenous hide. Knee-high Dwarven boots often incorporate built-in greaves over the shins.

Dwarven recurved bows are powerful and can drive an arrow through an oaken board. Though they appear to made of metal, they are not; the strong yet flexible material they are made from is otherwise unknown, and cannot be duplicated by modern bowyers.

All Dwarven chest armor consists of metal plates of various sizes affixed to a leather cuirass' thin, flexible leather with a few small plates in the case of light armor, the leather becoming thicker and the plates larger and more numerous as the armor gets heavier. The plates are typically geometric in shape and ornamentation.

A Dwarven dagger typically has a broad and heavy triangular blade, as suitable for chopping as for stabbing. In fact, they resemble tools as much as they do weapons.

Dwarven gloves were always made of fine and flexible leather or pseudo-leather, reflecting their wearers' need for fine manipulation of their devices. Only the heaviest gauntlets sported metal ribs, typically tessellated splints protecting the back of the hands.

Dwarven helmets of all kinds famously cover the entire face with a face-shaped visor, curiously bisected down the center by a sort of metal keel. This keel reappears atop the helmet as a crest, which may be modest or bizarrely exaggerated. A line of Dwemer troops, all wearing helmets with identical, impassive visages, must have struck terror into the Deep Elves' enemies.

The leg protection of the Dwemer typically consisted of geometric plates or cylinders of metal, mounted on the same thick yet flexible material used for their boots. The armor was particularly thick over the knee.

Dwarven maces have heavy and blunt geometrical heads, without flanges, spikes, or pointed finials. The two-handed maces are outweighed only by Orcish skull-crushers, and can bend and batter plate armor as if it was foil.

Dwarven shields come in many shapes, but all echo the geometric forms seen on Dwemer armor, albeit writ large. They are formed from relatively thin plates of Dwarven metal, and are much lighter and wieldier than they appear.

Dwarven shoulder pauldrons were usually made of thick and inflexible metal, mounted on cops of heavy "leather." The pauldrons of heavier armor sometimes sported metal keels echoing the crests seen atop their helmets.

Even the most elaborate Dwarven staff has a utilitarian look about it, as if it was going to be used with a paddle to draw a loaf of bread from an oven. The haft is made of some close-grained substance that looks like wood but is not, circled with rings of Dwarven metal. The finials are circular or fan-shaped, and usually modest in size.

Dwarven swords look like mere extensions of their daggers, featuring the same broad, triangular blades with both point and edge. Their cross-guards are slender to almost nonexistent, which argues that Dwemer swordplay did not rely much on thrusting.