Morag Tong Style is an armor and weapon style in Elder Scrolls Online. This Style is divided into several motif book chapters: one for each weapon type and one for each armor piece.

Where to get Morag Tong Motif 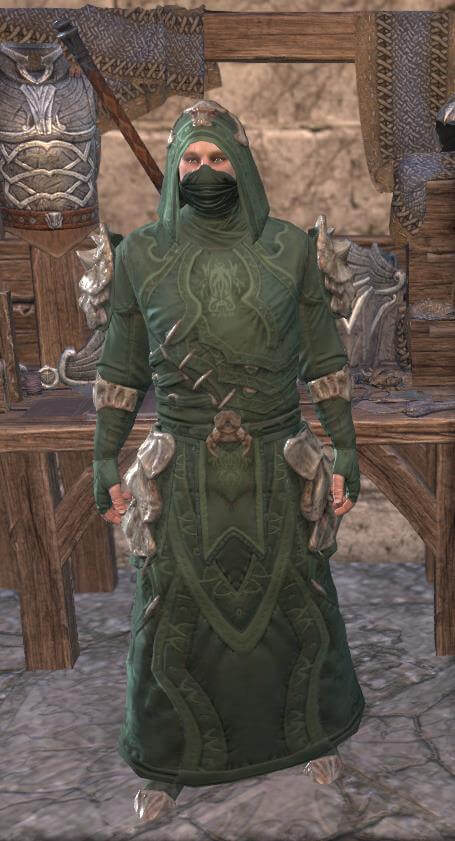 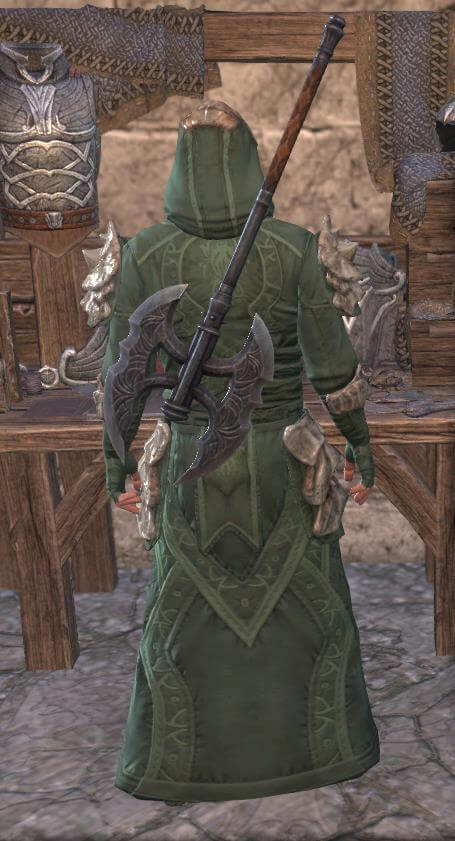 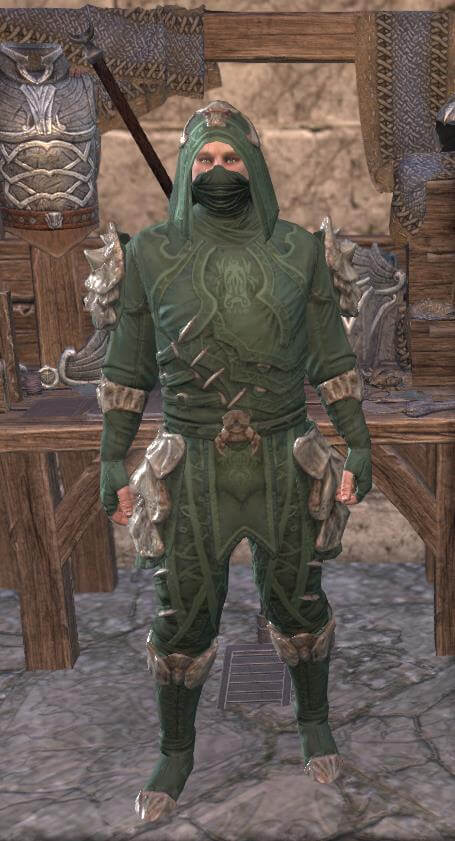 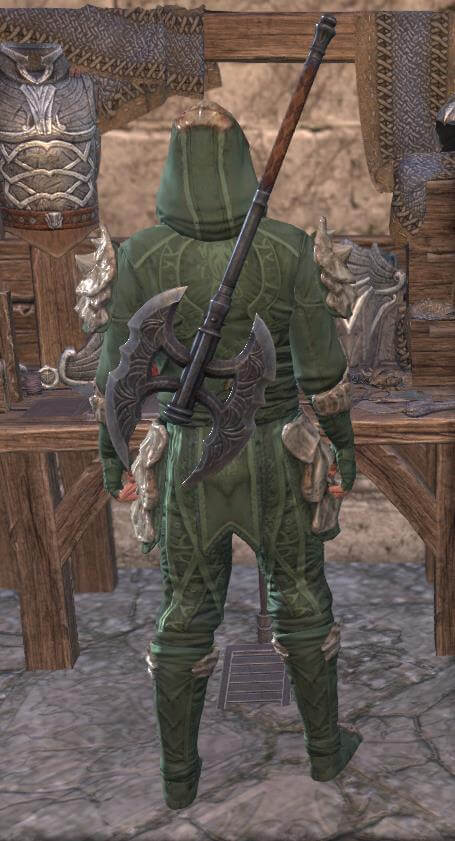 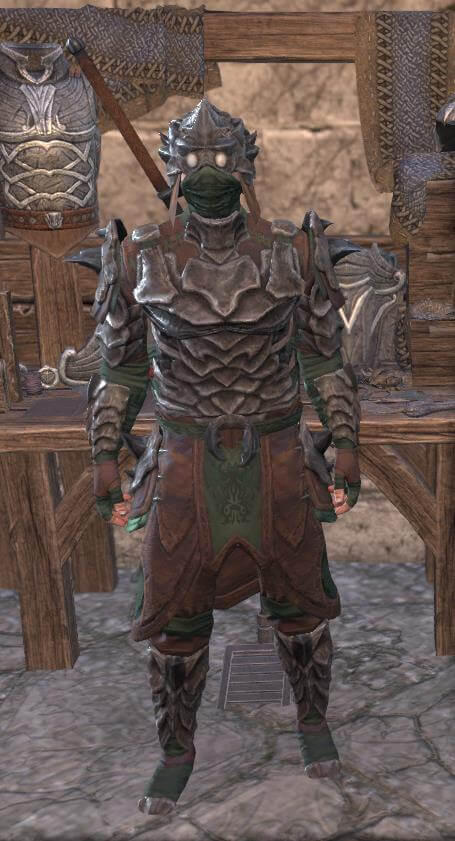 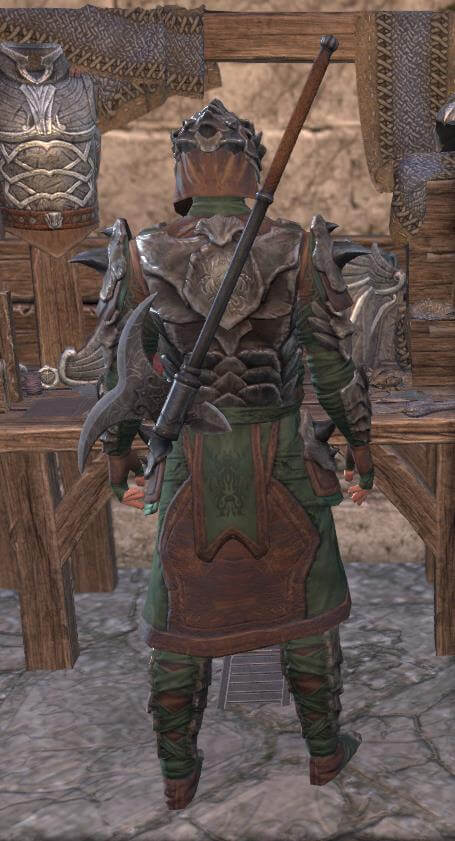 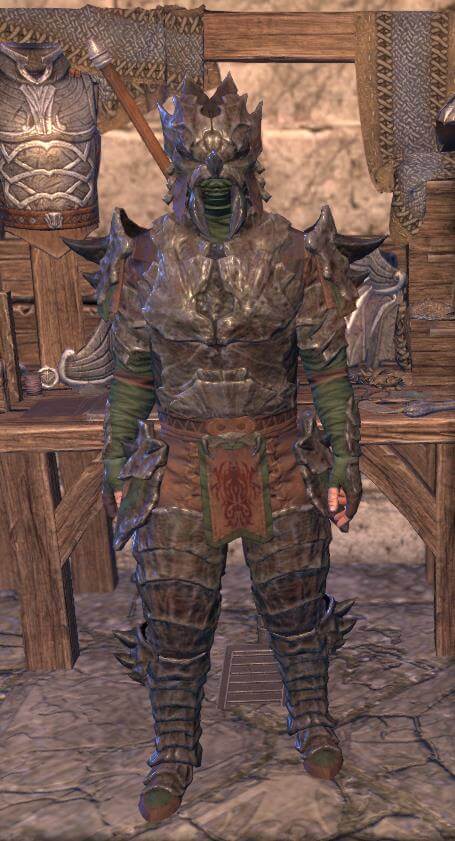 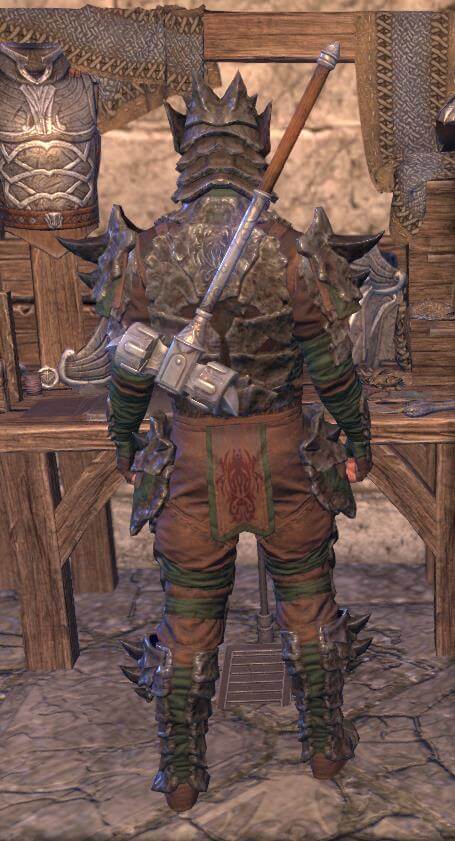 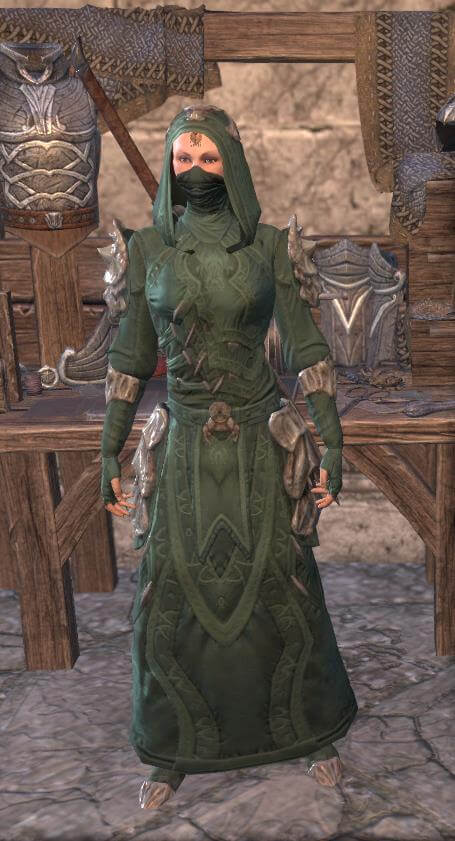 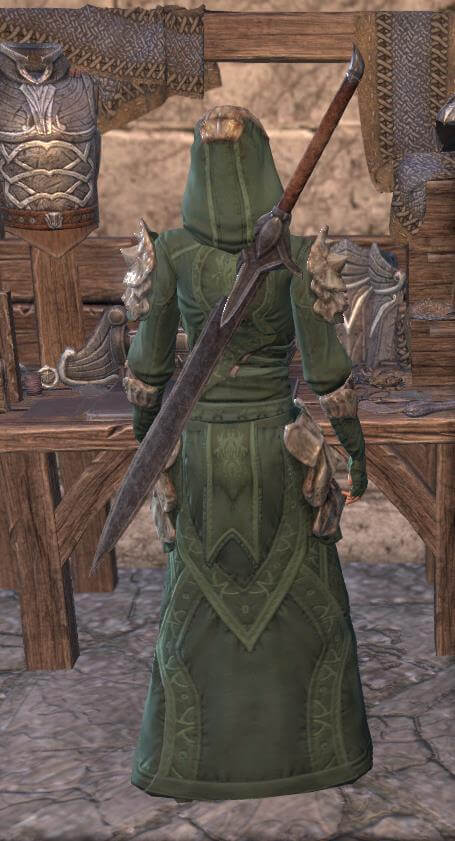 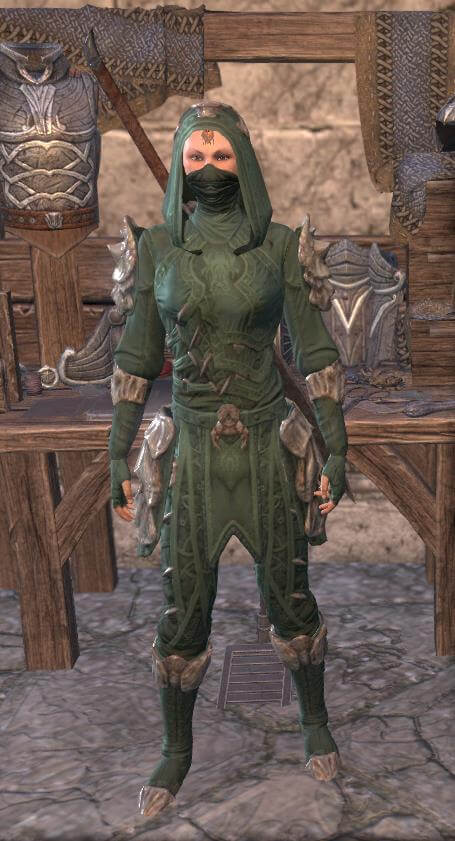 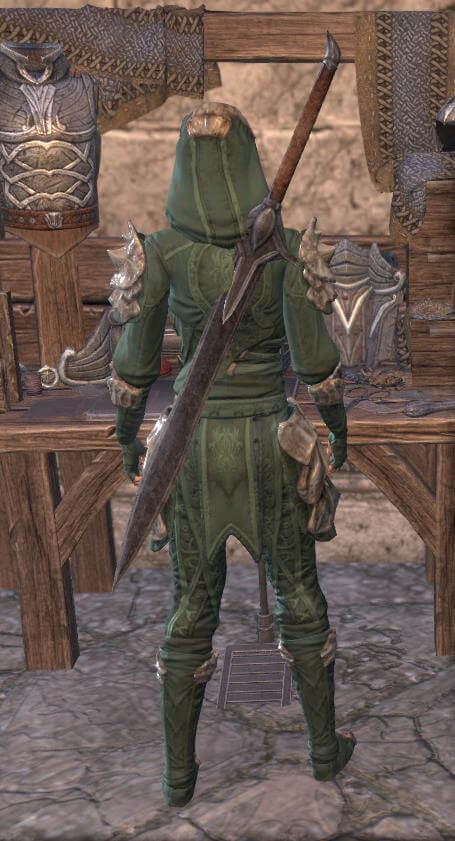 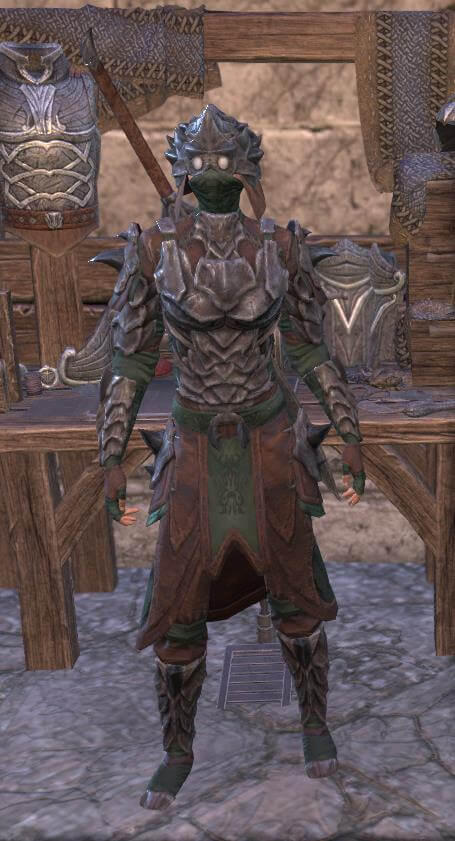 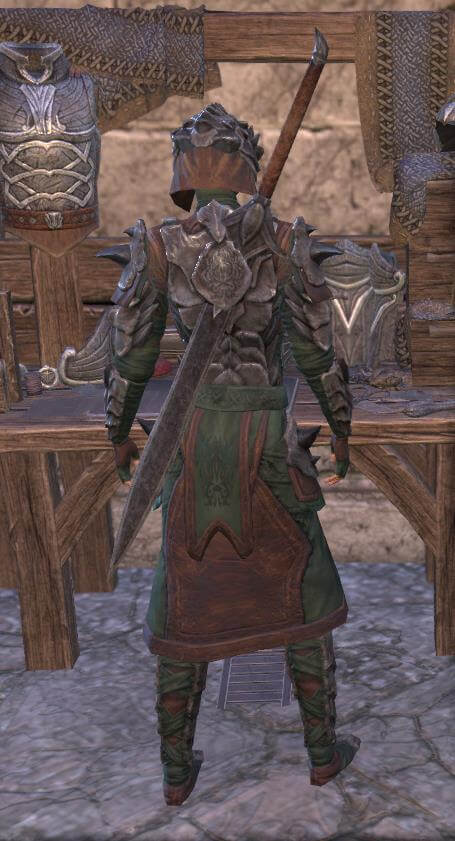 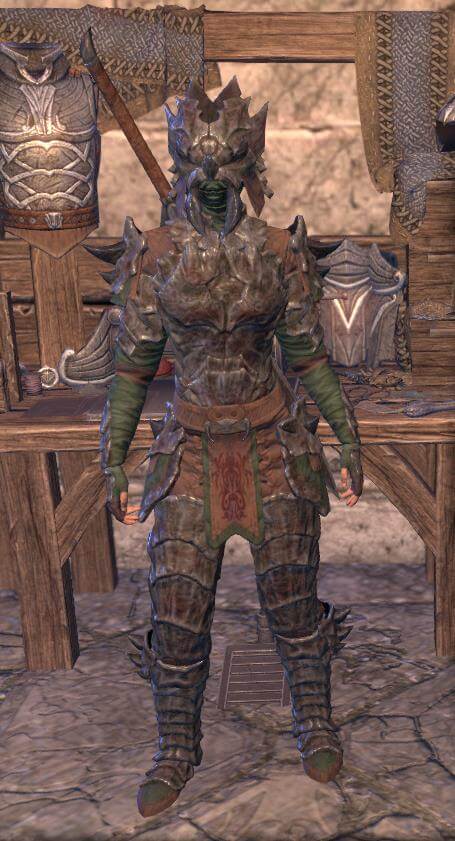 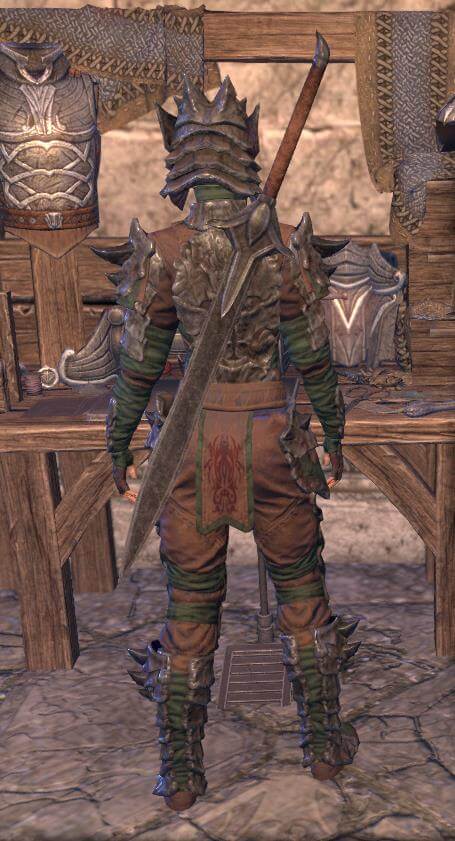 Guild Memo to the Recondite Forge

I've been asked to convey to you the Exalted Master's dissatisfaction with your recent work for the Tong. The Sun's Dusk shipment was unacceptable, not up to standard either in quality or style. We're going to give you one opportunity to redeem yourselves. Don't fail. In the interest of your ... rehabilitation ... I'll summarize our requirements for you below.

Note the broad, heavy crescent blade with the signature "double bite" inset edges at the center. These wide serrations result in particularly savage wounds that look like they were inflicted by some forest predator. (And what does "Morag Tong" mean in ancient parlance but "Forest Guild"?) Axe blades: double bite. Got it?

The Morag Tong are like woods hunters, except people are our prey. Our belts are of simple stout leather, like a forester's, occasionally ornamented with dreugh or mudcrab chitin--but don't get too fancy. Save that for the cuirass and pauldrons.

The toes and uppers of the Morag Tong shoes are protected by plates of chitin, but the sides and soles are of flexible leather, tough but quiet. The goal is to make sure our writ-targets never even hear us coming. Can you manage that? For your sake, I hope you can.

Morag Tong archers wield composite bows of hardwood and horn, constructed on fundamental principles that haven't changed for millennia. For flourish, add metallic parry-crescents just above and below the central grip, with spider-web supports to honor the Webspinner. (Don't pretend you don't know of whom I speak.)

A Morag Tong cuirass is designed to intimidate as well as to protect. The base arming coat shall be dark, heavy leather, ideally Bull Netch, accented or (in heavier sets) layered with irregular plates of chitin. The effect should be monstrous, as if the wearer were more crustacean than person. Be imaginative! We have a reputation to maintain.

The blade on a Morag Tong dagger should be an offset demi-crescent, with a hook or barb on the point so the dagger can double as a corpse meat-hook. The hook must be able to drag a body without bending or slipping out--which is what happened with that last batch you sent us. Don't you even test your work before you call it done?

In that last batch of gauntlets you sent us, you got the leather quality and the chitin plate on the back of the hand right, but you blundered by giving the gloves full finders instead of half-coverage. We do delicate work, all right? We need the ends of our fingers free for things like picking locks and twisting garrotes around victims' necks. Gauntlets with half-fingers. Got it?

You did a relatively good job with our flanged chitin helmets, but the visor goggles were a complete failure. The heavy glass lenses were rippled, distorting the wearer's vision and making everything appear slightly off-center. We can't be going in to cut a writ-target's throat and hit them instead on the shoulder. Whatever source you've been using for lenses, change it.

These should be heavy leather--once again, Bull Netch if possible--with a top layer of chitin plates. That's chitin, like from dreugh or mudcrabs, NOT bone. We don't wear bone. Also, the shard poleyns on the heavier armor should jut out to the side rather than the front, because that's weirder and looks more dangerous.

For the Tong maces, we use a pretty traditional Chimer warhammer design, with two heavy cylindrical heads. Sheath the haft below the head with metal for parrying purposes. And make sure it's not too shiny: we don't want our weapons to compromise stealth.

I know the shield design looks like chitin, but it's actually ashwood faced with metal. It only looks like layered chitin so as to be thematically compatible with the Morag Tong armor, which is made of actual chitin. Is this too confusing? Read it through several times slowly until you've got it. Then do it right.

Getting the shoulders right is very important to maintaining the Morag Tong armor's distinctive silhouette, so pay attention. The pauldrons are layers of articulated chitin plates, like the cuirass, but the upper plates need to have short curved spikes mounted on them. Use dreugh or chalk shell spurs for this.

There are only a few real spellcasters in the Tong, and I'm not one of them, so I can't comment on where the design for our spell staves comes from, or why it's so important we stick to it. I think the finial looks like a heavy brass Dwarven fish, but that's just me. What matters to you is that you follow the design as closely as you can.

Morag TOng swords have one sharp edge, with a curve towards the point, which ends in a back-barb like the dagger, and for the same reason: so it can double as a corpse meat-hook. Put some irregular curved points on the sword's spine, just so it look nastier.