Yokudan Style is an armor and weapon style in Elder Scrolls Online. This Style is divided into several motif book chapters: one for each weapon type and one for each armor piece.

Where to get Yokudan Motif 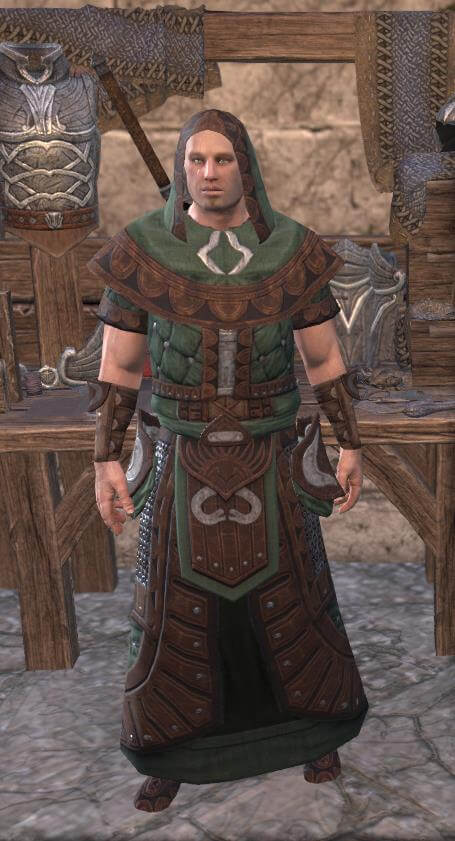 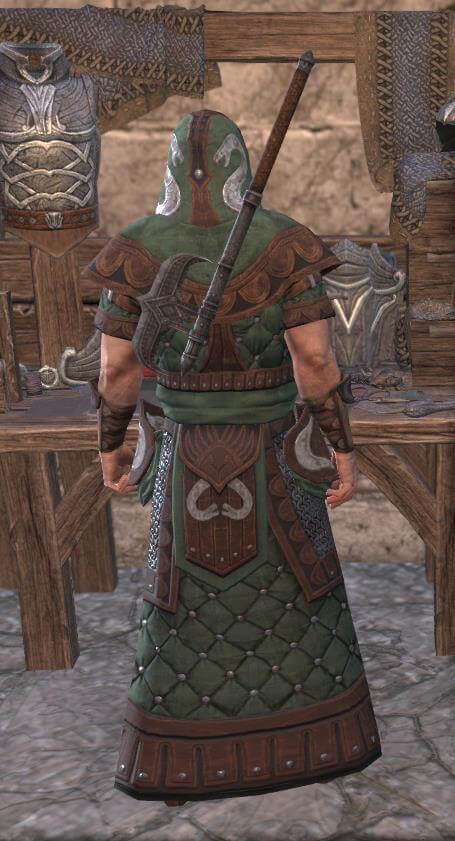 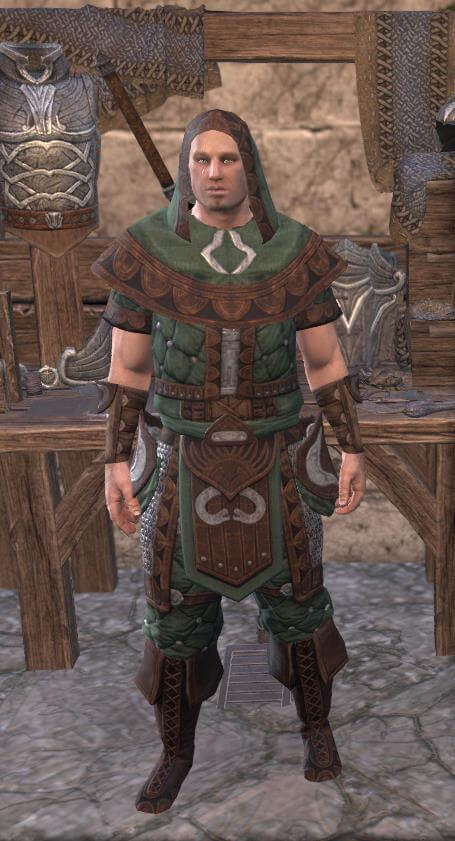 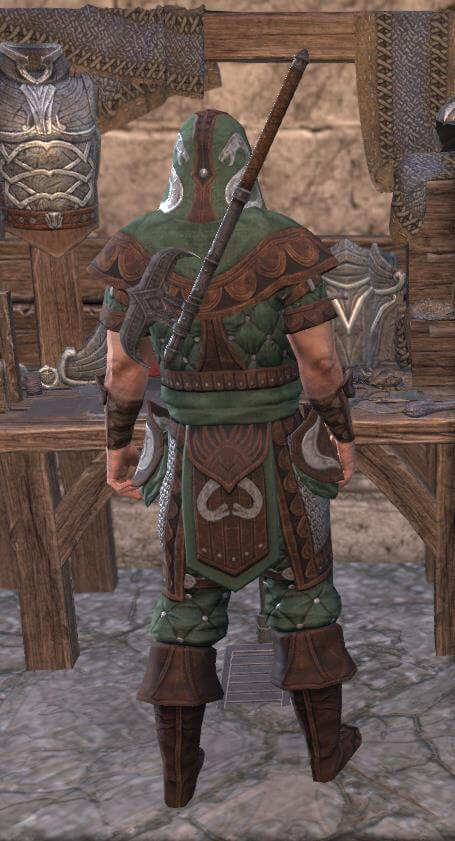 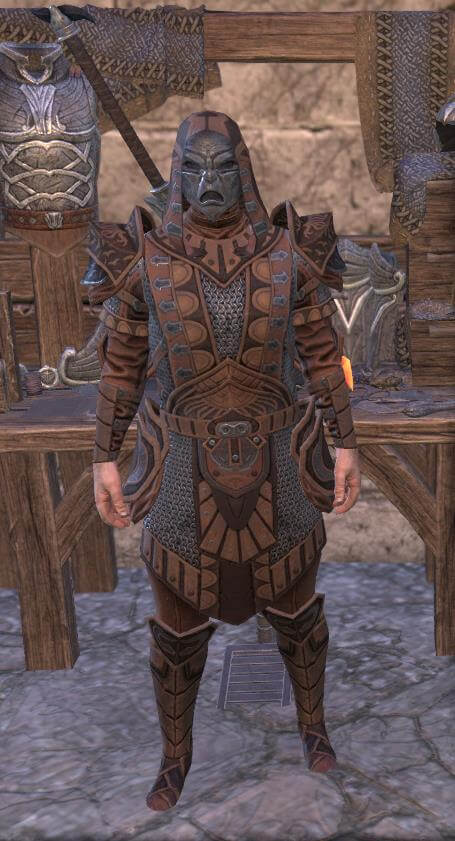 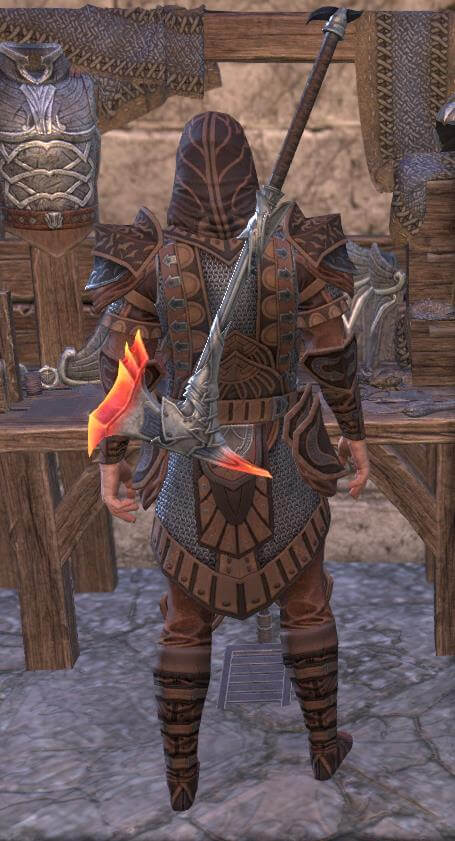 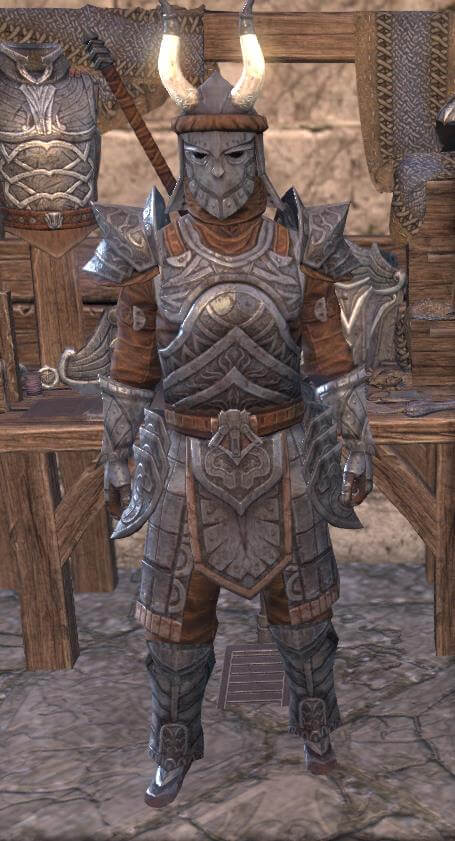 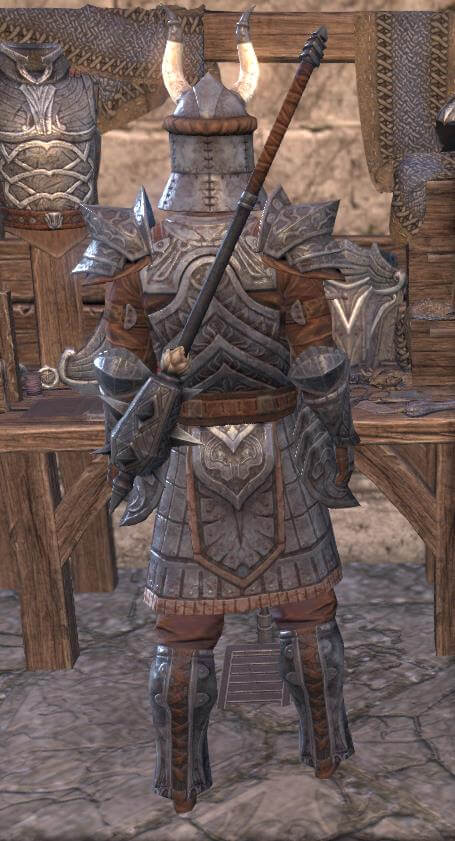 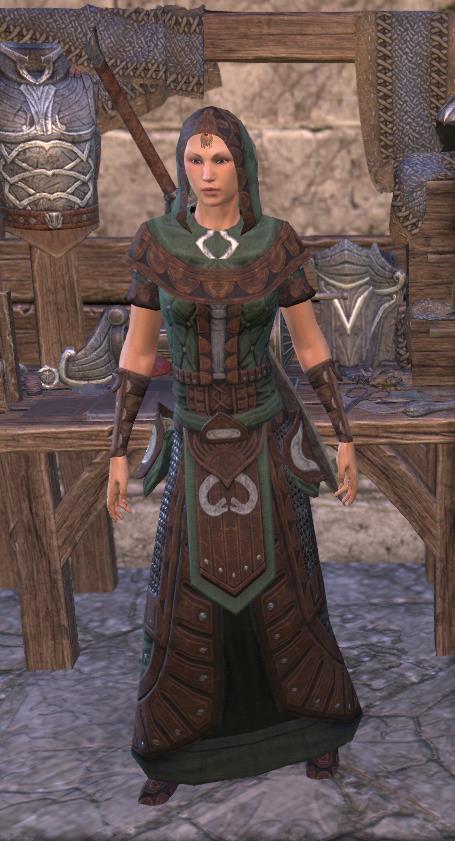 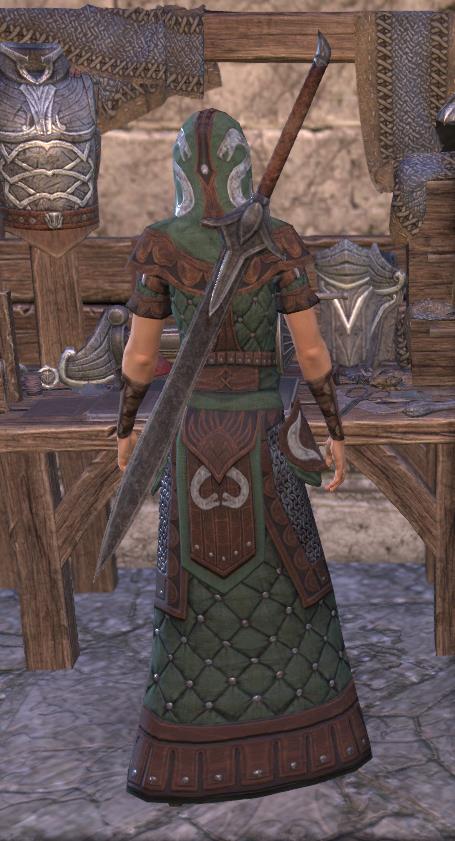 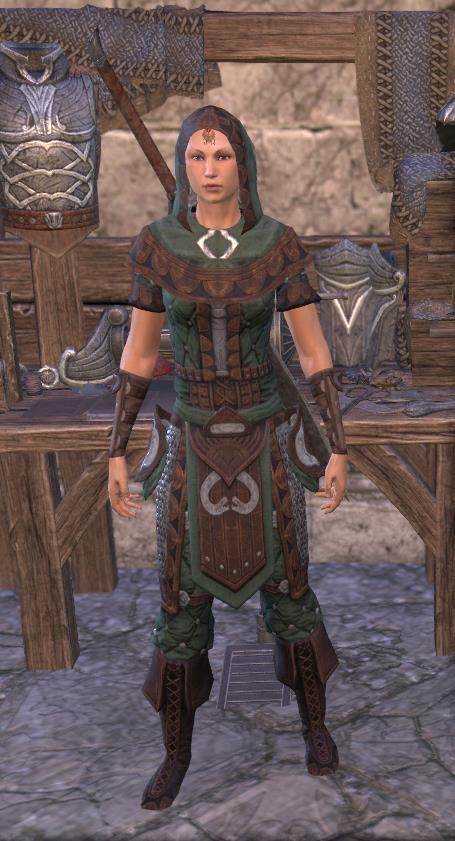 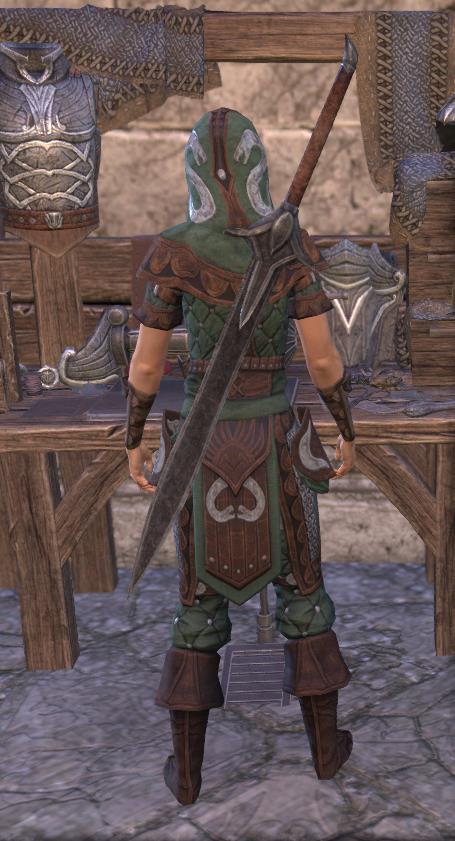 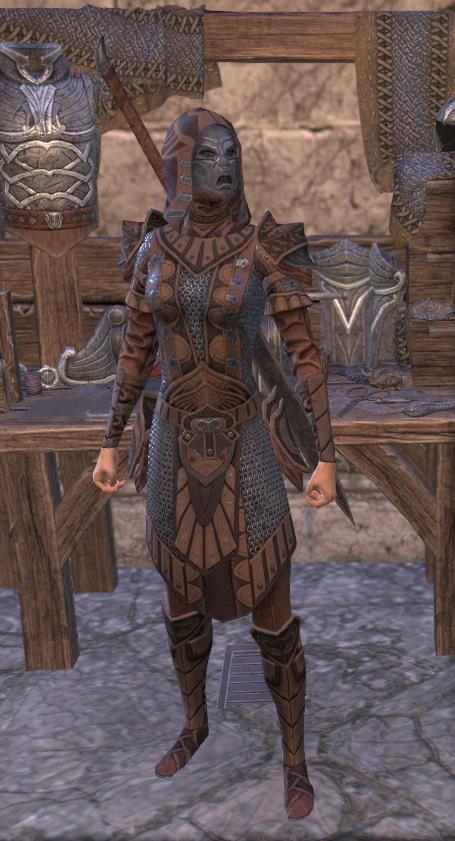 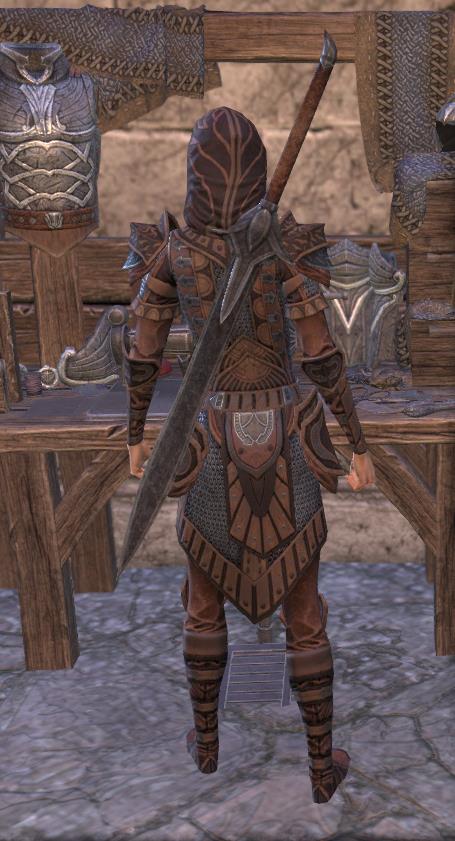 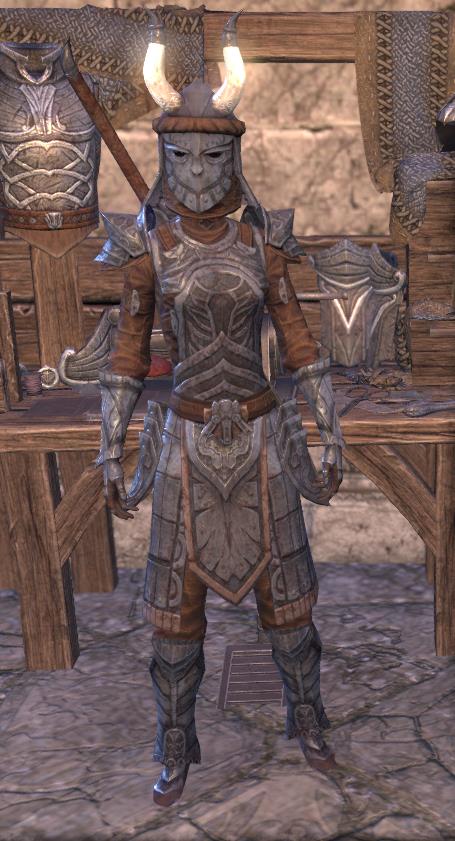 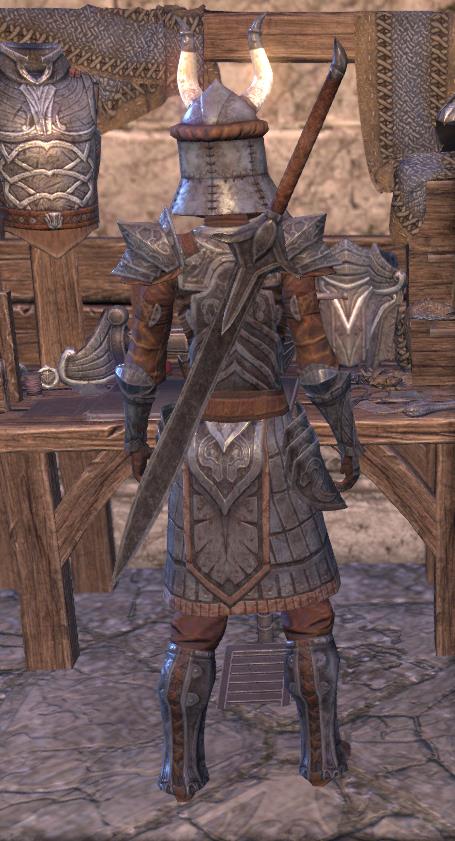 Stored here in the Seeker's Archive are much of the lost history and wisdom of Yokuda, in books and scrolls brought here by the first of the Ra Gada. It will take many lifetimes to catalogue it all, so we shall start simply, with references to the characteristics that make the Yokudan motifs unique and distinctive, such as the so-called "broad arrowhead" design.

Though the Yokudans were dedicated to the sword above all, they recognized the utility of other weapons as well; their axes, for example, were both beautiful and formidable. They often had long, curved cutting edges, giving them some of the virtues of swords.

Yokudan belts tended not to be elaborate, because what mattered was what hung from them: the all-important sword or other weapon, as well as tassets for hip protection. The buckle was usually a strong and simple geometric design.

Yokudan boots were made for combat, of heavy leather with strategically-placed metal plates for protection. But they were also flexible and rugged for marching across the harsh Yokudan terrain.

The Yokudans had little esteem for archery, deeming it less honorable than melee combat, and their gallants and grandees left it to the common foot soldier. A Yokudan archer or light skirmisher was usually armed with a simple self bow adorned with modest metal facings.

For Yokudans, the art of weapon combat was profoundly athletic, so while their cuirasses offered solid central protection for the chest and back, the arm, shoulder, and waist areas were covered with flexible leather for maximum agility.

A Yokudan dagger just looks like a smaller version of a Yokudan sword, and indeed they tended to be large, approaching short swords in size. A large dagger in the off hand was a common choice for Yokudan dual wielders.

Yokudan warriors emphasized sword fighting above all other weapon styles, and in swordplay the hands are always under threat, so Yokudan gauntlets were heavy and multi-layered, with flaring upper sleeves to protect the forearms.

Yokudan helm designs are clearly descended from the turbaned hats of ancient pastoral nomads. They typically had aventails to protect the back of the neck, full visors covering the face, and even horns on the forehead or crest.

Yokudan chausses were strong to protect against low cuts in swordplay, often with metal plates covering both the shin in front and the calves in back, to prevent hamstringing attacks. Pointed knee poleyns were common as well.

The Yokudans were so attached to the idea of edged blades that they even mounted them on the heads of their maces, where you might find spikes or flanges in another crafting style. Some of these edged blades even came to points in the "broad arrowhead" design.

Yokudan shields might be round, oval, or kite-shaped, but all were fitted with blade-turning metal plates around their edges, and round central bosses featuring geometric designs. They appeared to be entirely metal, but were actually made of metallic plates riveted to wooden frames.

Though the shoulders themselves were sheathed in flexible leather to enable acrobatic swordplay, above that the joints were protected by sharp and often elaborate pauldrons, cops that flared at the top to guard the side of the neck.

The rare Yokudan war-wizards employed staves designed to resemble melee weapons to borrow some of the prestige of hand-to-hand combat. Their metallic finials might be round, flared, or pointed in the "broad arrowhead" design.

Though the curved Yokudan swords weren't elaborately embellished, they nonetheless represented the apogee of Yokudan weapon-making, having been forged and re-forged in a long process designed to make them unbreakable and invincible. Yokudan warriors regarded their swords as extensions of their essential selves.