Assassins League Style is a craftable armor and weapon style in Elder Scrolls Online. This Style is divided into several motif book chapters: one for each weapon type and one for each armor piece.

Where to get Assassins League Motif 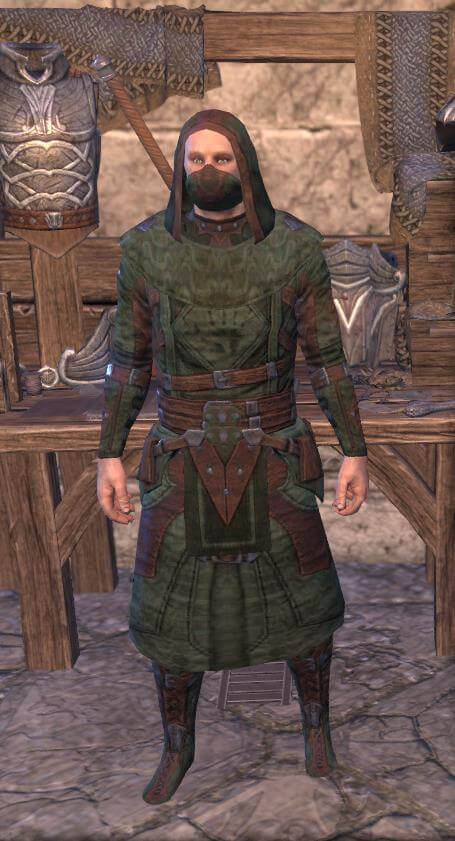 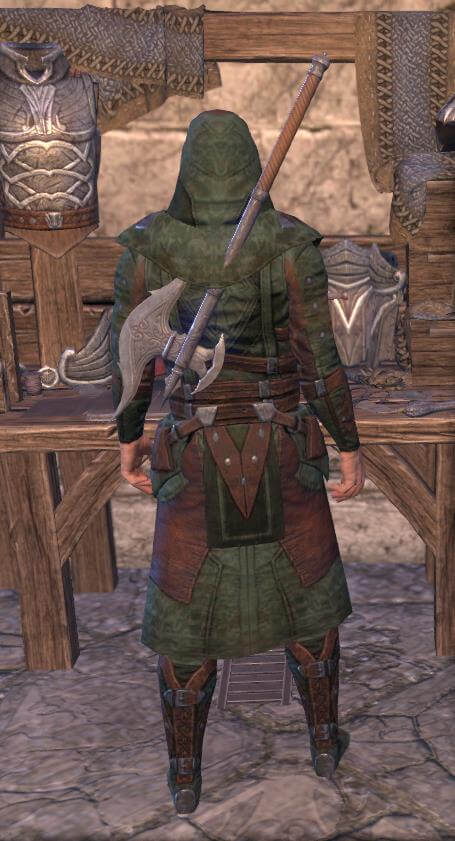 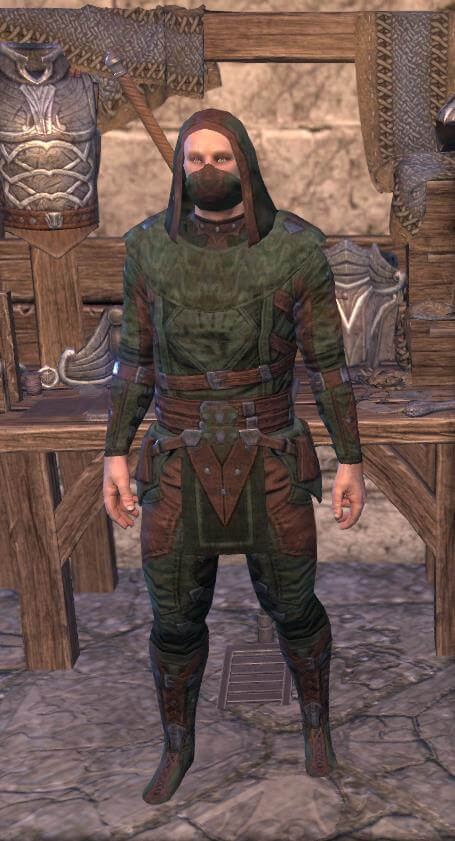 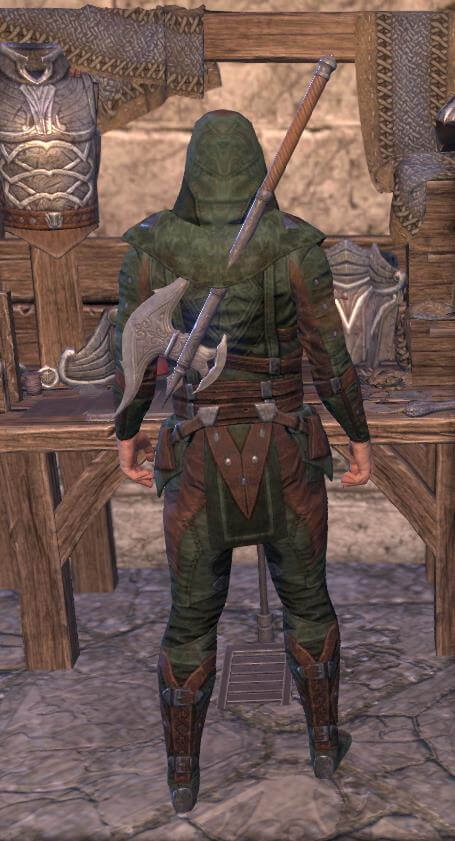 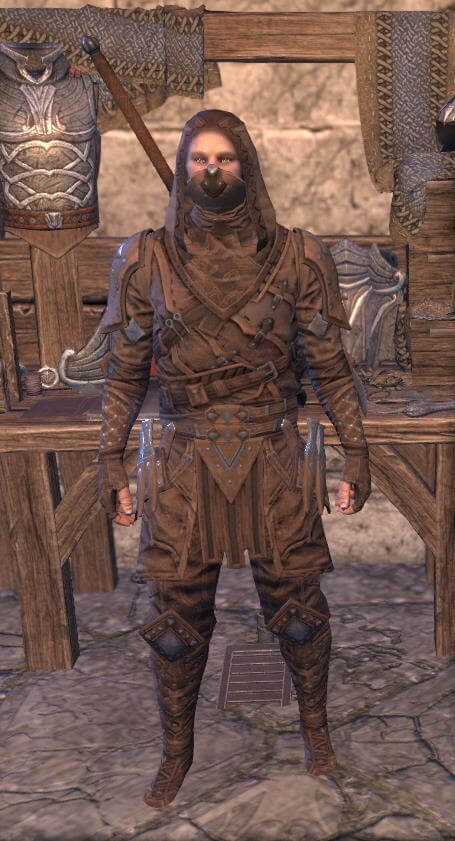 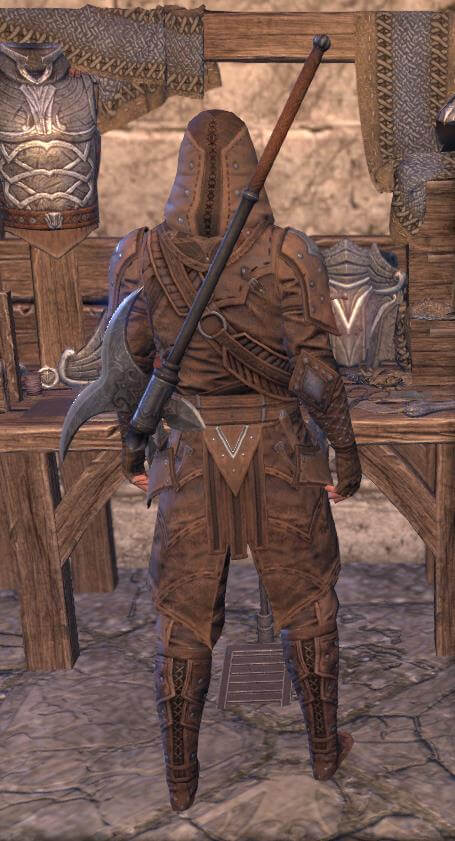 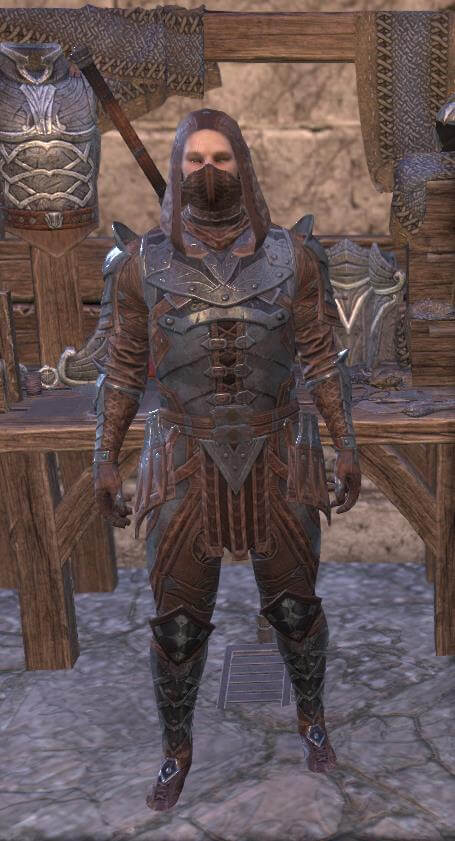 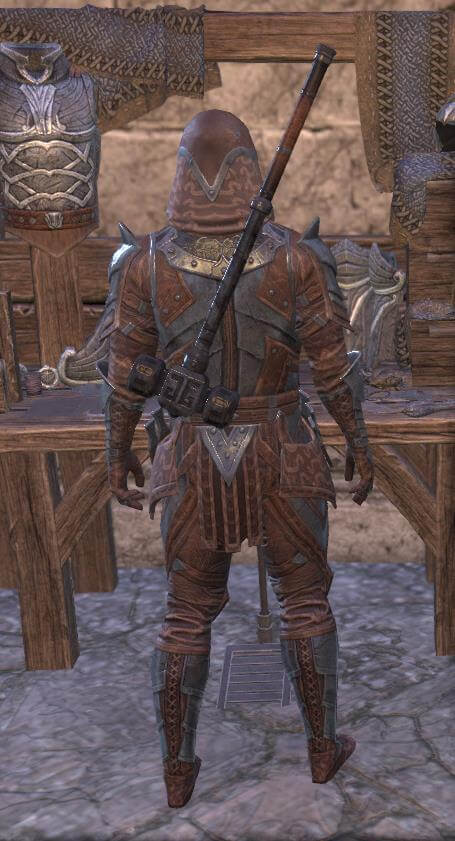 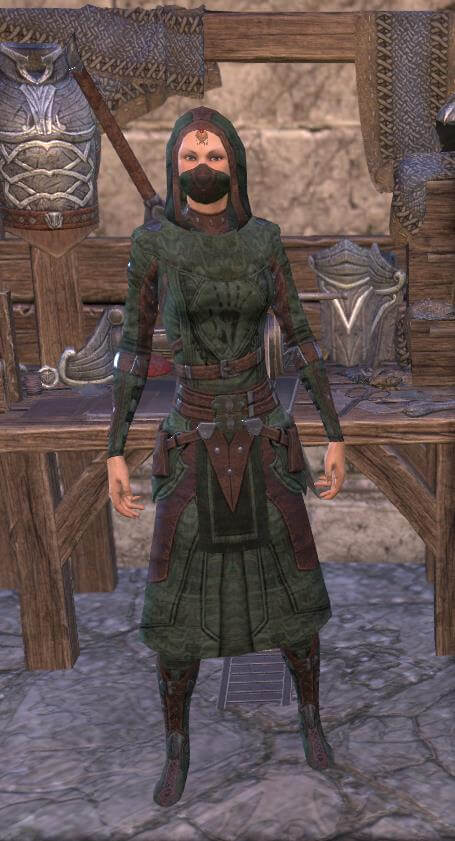 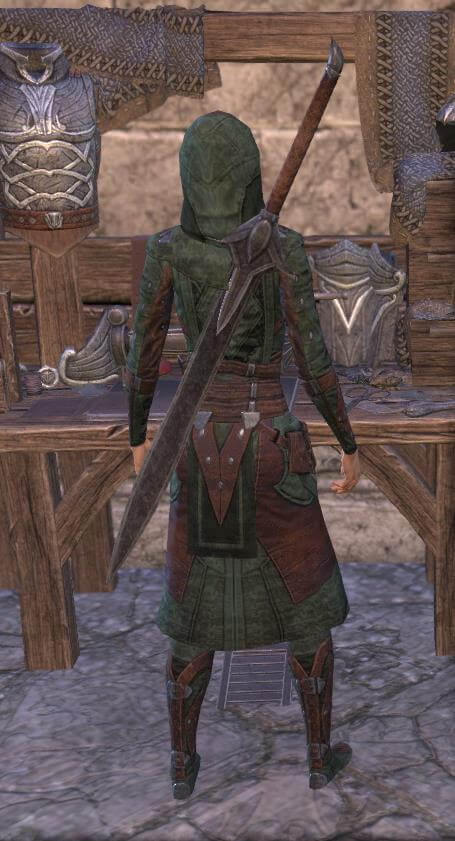 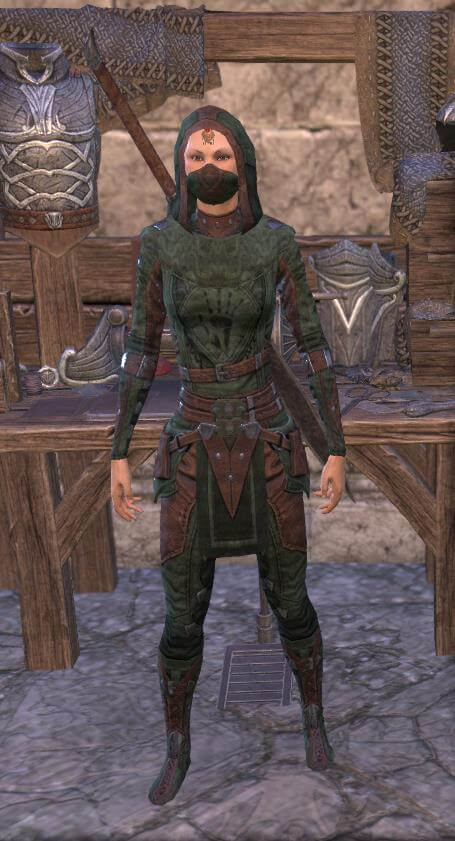 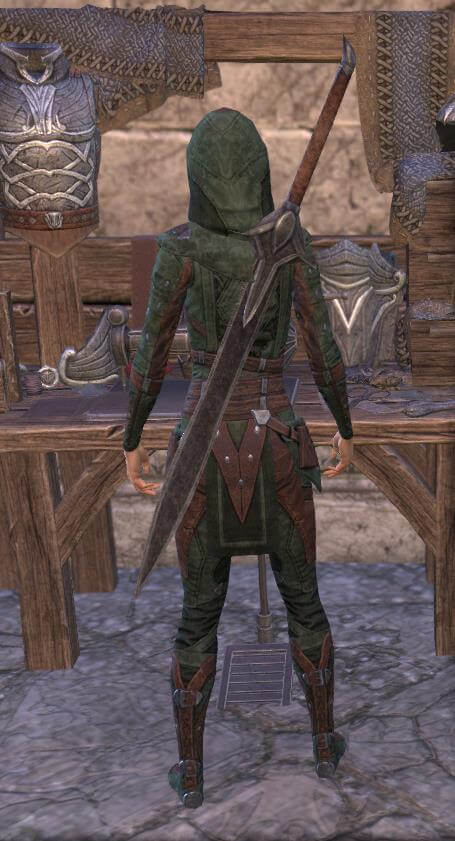 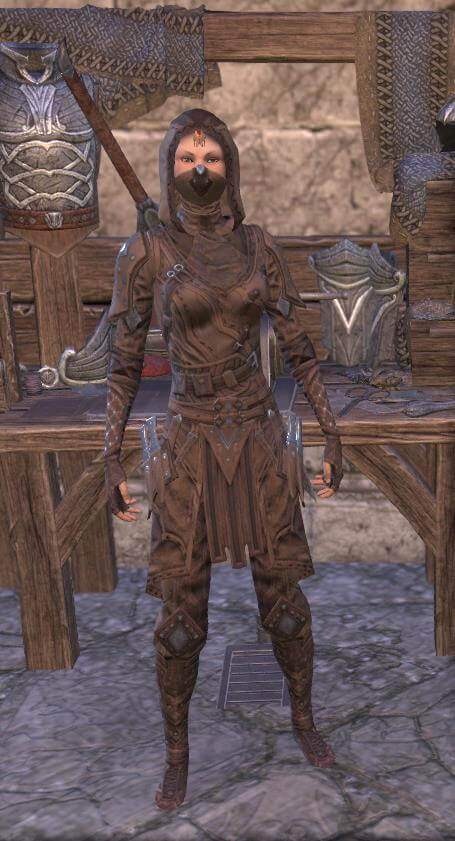 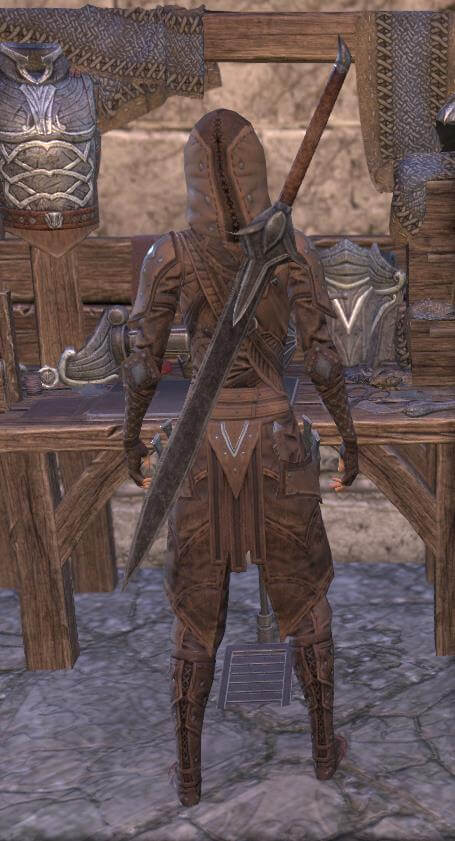 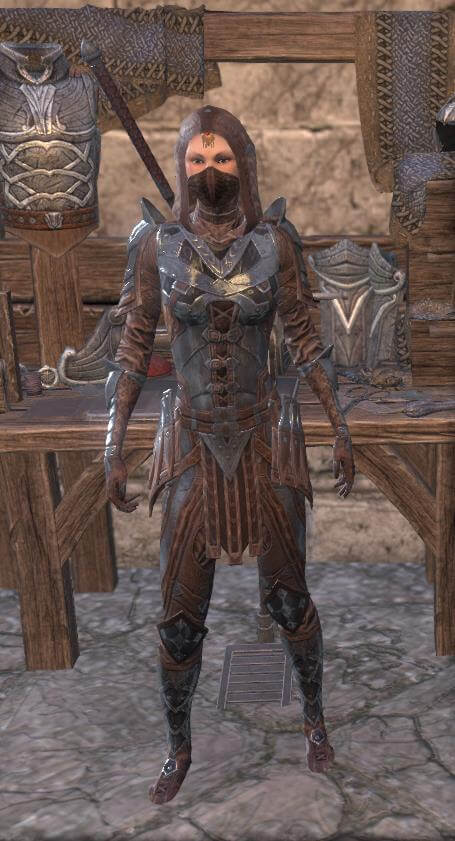 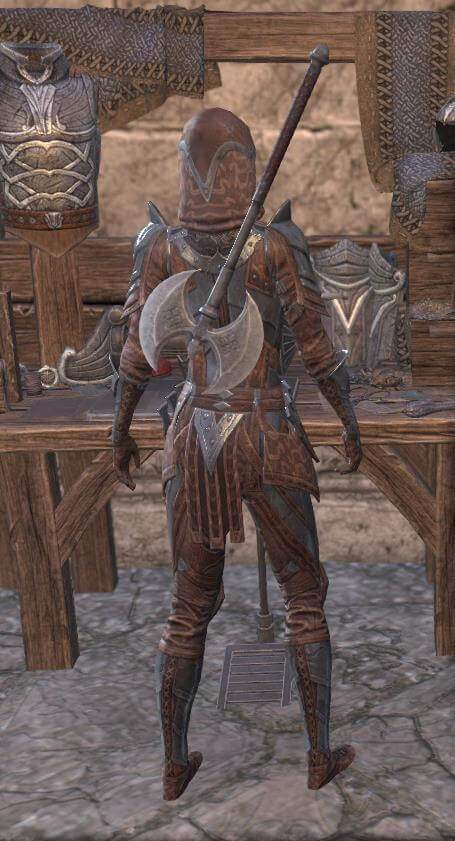 The "Dark Brotherhood"? Utter nonsense. The Brotherhood is a myth. A legend. A lie. Death comes to us all, and murder is merely a matter of mundane craft—there's no need to invoke the Void, or its, ahem, mother.

Ah, but a secret society of assassins, a guild of killers for hire—now that makes sense. That's just good business. And like every good business, we have standards. You wish to join us, and dress like one of our league? Then follow the instructions below. And one day, if you are found worthy, you may be invited to learn some actual secrets.

The hallmark of Assassins' weapons is that they are both nimble and effective, striving for that sweet spot between the heavy arms of soldiers and the supple but over-subtle weapons of duelists. Our axes, for example, feature a single, broad blade, with no more than a short slicing crescent on the backside for ripostes.

You'll notice that all Assassins wear dual belts, one above the other, with weapons and tassets depending from the lower strap. Why is that? Because sometimes a job goes wrong and you need to make a sudden escape, in which case you can drop the bottom belt and everything on it, losing all that extra encumbrance.

Boots? An Assassin's footwear will be more like a dancer's shoes than a warrior's sabatons: light, flexible, and above all quiet. The best leather for soles is guar hide, which is limber but provides good traction on uncertain surfaces.

If someone should say unto you, "Oh, I see your bow has death's-heads on it, so I guess I should be really afraid, since you must be some kind of assassin or something, right?" …You are authorized by the League to kill such a person, and take their head. Full-sized skulls make good decorations for ballistas.

Remember, Assassin, you are not a soldier—it may be your job to kill, but wholesale slaughter is not your task: you kill once, and escape to kill again. So League-standard armor, even your cuirass, is to be relatively lightweight and flexible, with plenty of attach-points for tools and weapons.

For the League Assassin, the primary function of the dagger is as a weapon for surprise attack from behind, to either slice the windpipe or plunge into the lower back. It must be small enough to be nimble but big enough to kill, and razor-sharp on both edge and point. A barb behind the point comes in handy when manipulating a body, whether living or dead.

Keeping your hands nimble and free is of critical importance in all phases of assassination. When lightly armored, we forego gloves entirely below the forearm; even when more heavily armored, our gloves are so light and supple as to be barely there at all.

Executioners don't wear helmets, they wear hoods—and so do we. To be quite accurate, we wear leather coifs, layered underneath, in the heavier versions, with skullcaps and flexible mail. The value of a buffe that conceals the lower features is obvious in our profession.

As often as not, a League Assassin travels on all four limbs, leaping and climbing, clambering and crawling. For such activities, rigid greaves are a liability, so with leg armor, as elsewhere, the watchwords are resilience and ease of motion. Modest knee poleyns are useful when crawling or kneeling to shoot.

For bludgeoning, we use a square-headed warhammer backed with a metal spike deliberately curved to evoke the look of a raptor's talon. It's also useful for prying open any doors or windows you might encounter between you and your target.

For the League, a shield usually comes into play on two-person missions, where one assassin is using it to cover a second killer who's picking a lock or lining up a shot. So the shield must be large enough to crouch behind, but with cutouts to left and right so one can stab or shoot around it.

While flaring pauldrons may make a fashionable silhouette for a warrior, they are counterproductive for an Assassin, who can't risk getting hung up in the scenery in the middle of a stalk. Shoulder protection is important, but so is keeping a low profile.

When we assign an Assassin a target, we say, "Pass over them with the Hand of Death." Thus we use a stylized iron hand as the finial on our spellcasters' magic staves. It is acceptable to place a round-cut precious stone on the back of the hand to represent the all-seeing eye of the League.

A League Assassin's sword is a tool of death, long and strong, sharp-edged and sharp-pointed, with a barb behind the tip of the slightly-curving blade. It designed to be fearsome to behold, its very look calculated to paralyze an opponent who sees it come gleaming from the shadows.