Mercenary Style is a craftable armor and weapon style in Elder Scrolls Online. This Style is divided into several motif book chapters: one for each weapon type and one for each armor piece. It was made craftable by the Orsinium DLC.

Where to get Mercenary Motif

To earn the Chapters of the Mercenary style, you must complete Undaunted Pledges and open their reward chests. 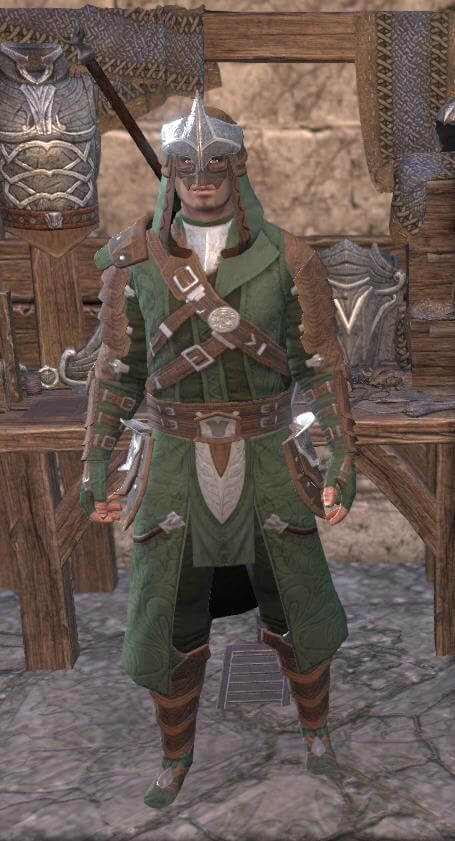 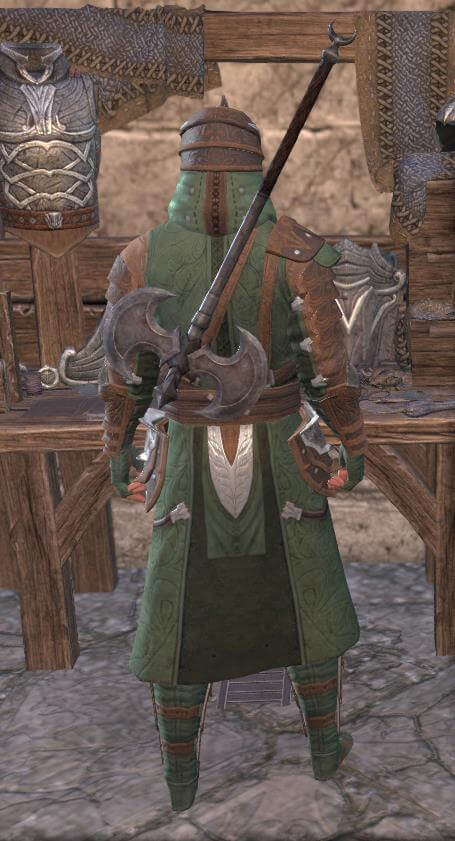 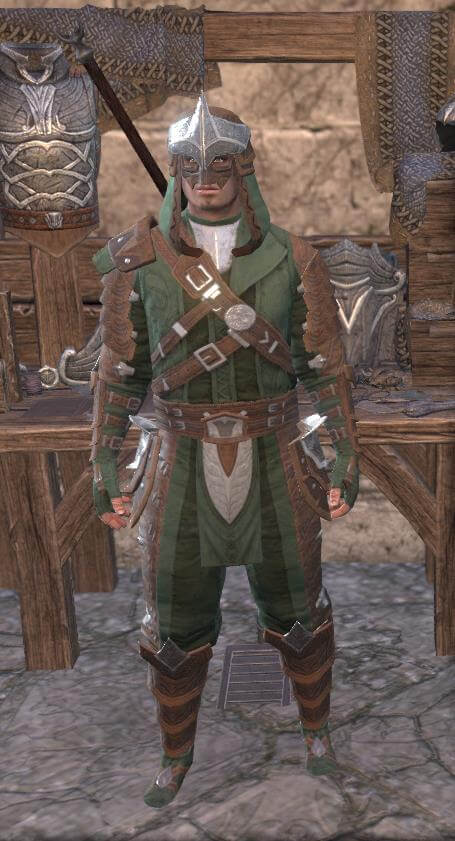 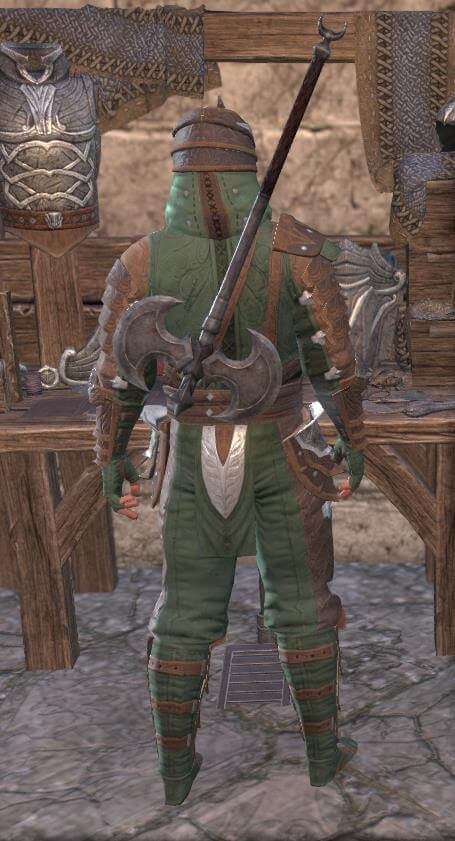 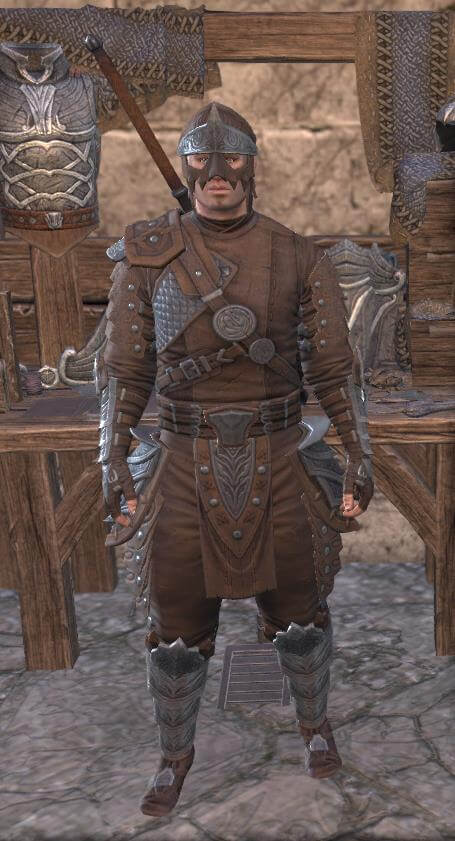 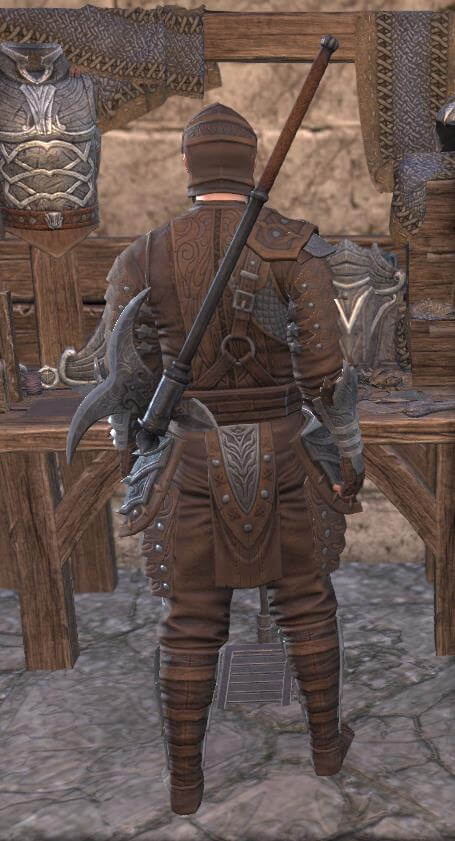 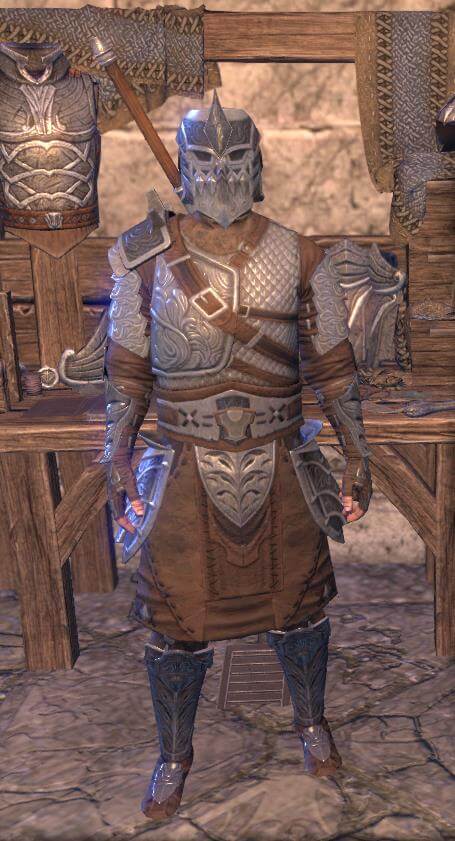 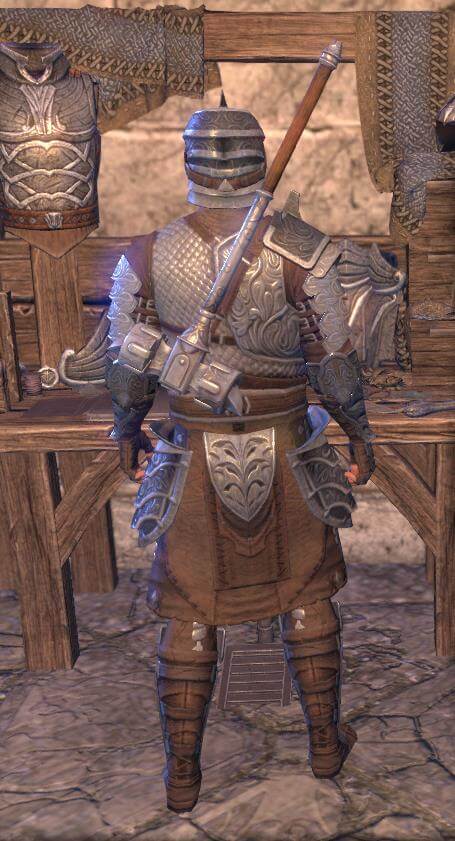 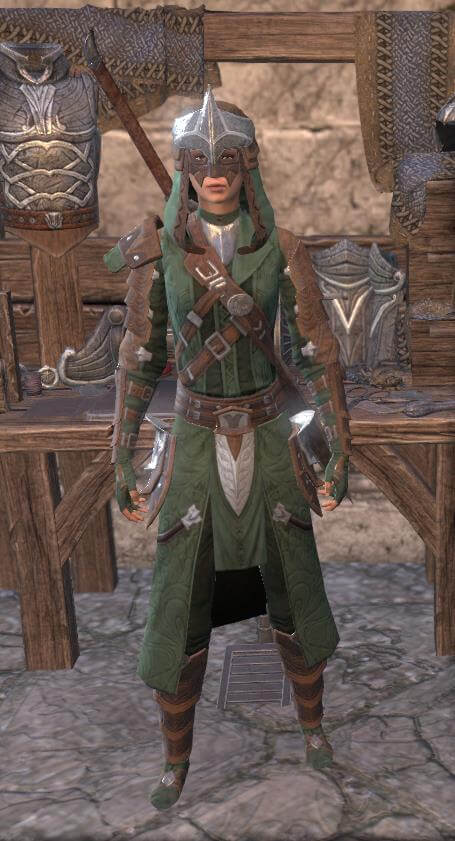 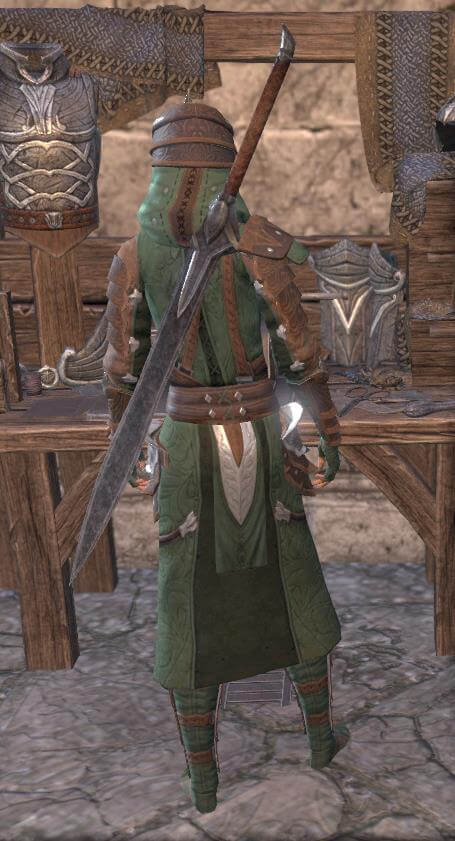 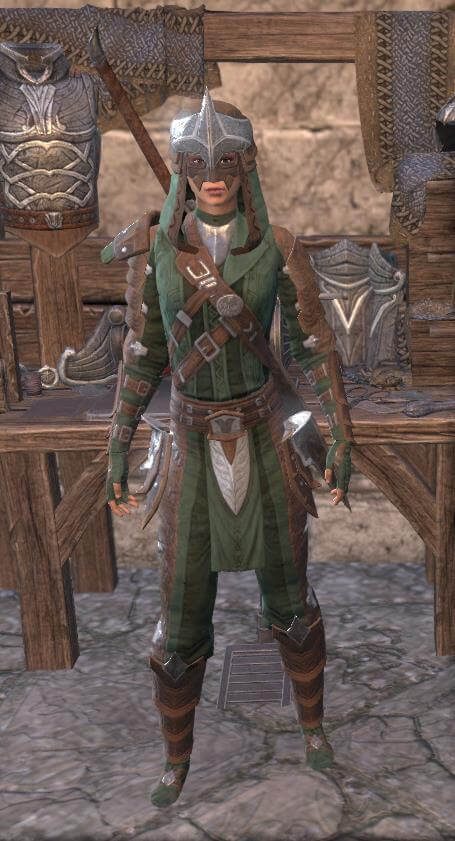 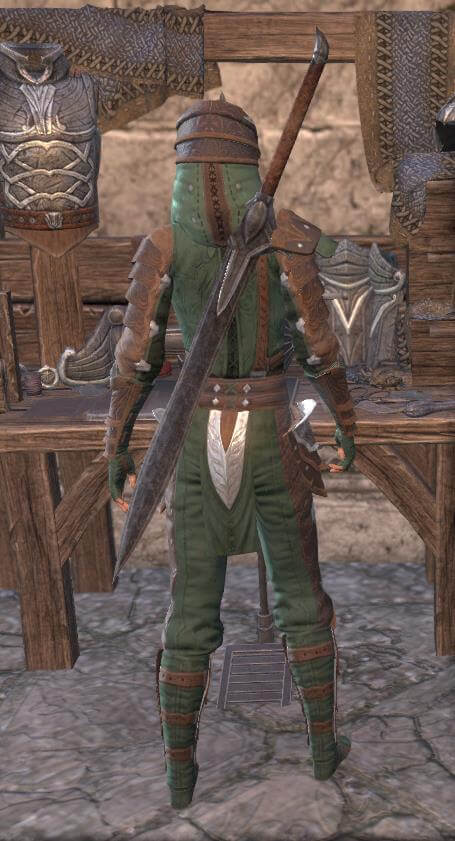 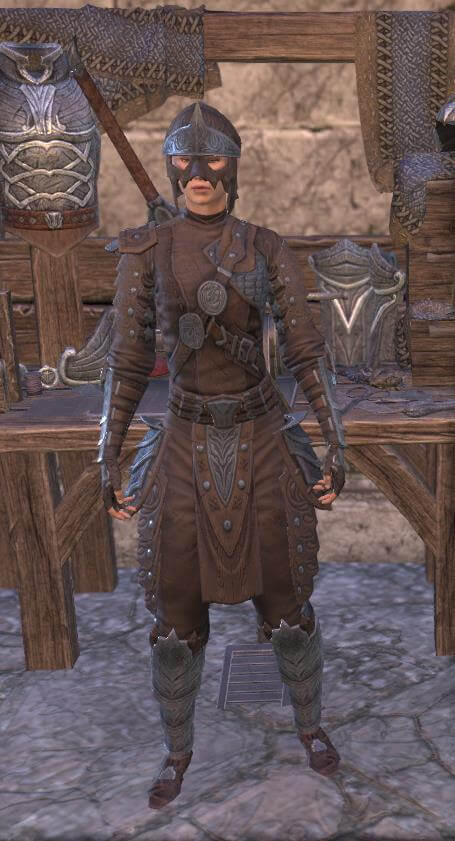 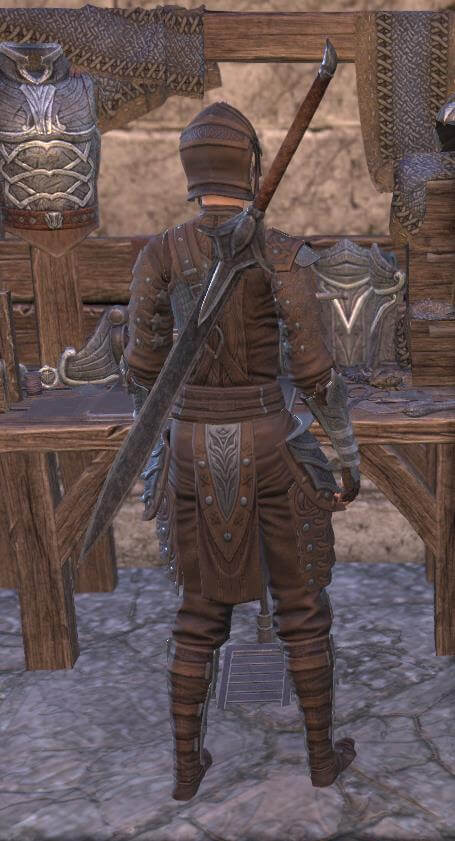 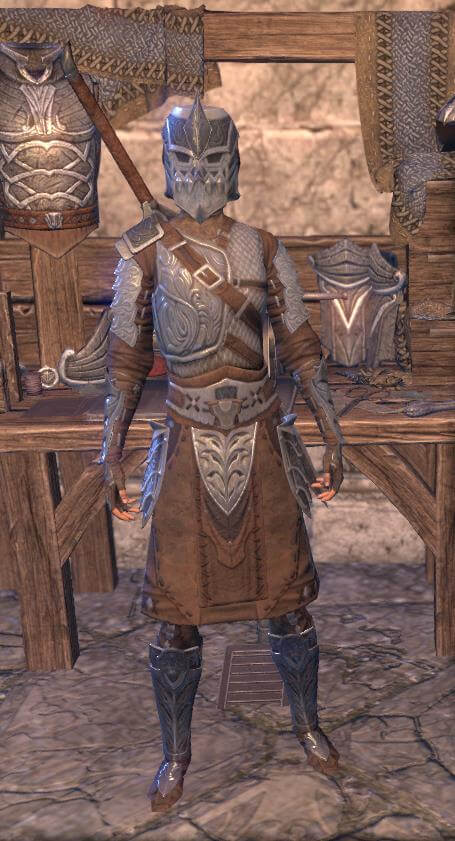 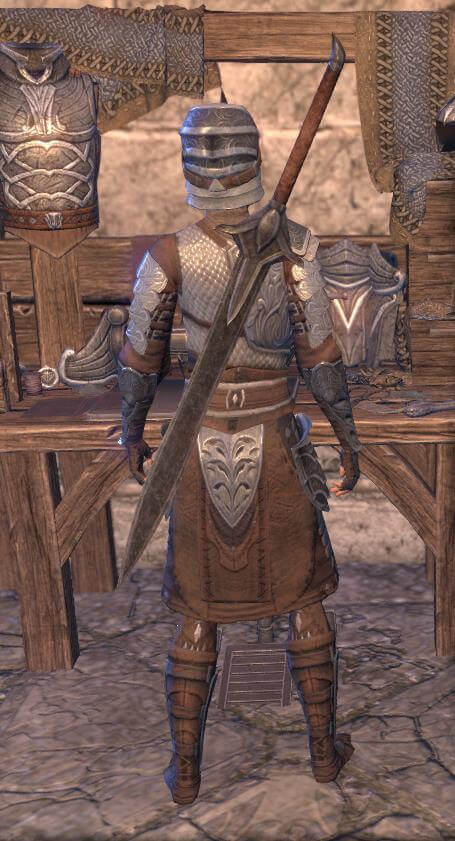 Mercenary companies got a bad reputation during Potentate Versidue-Shaie's War of Subjugation, when paid troops of Imperial vassals went rogue, pillaging their way across the provinces until the Legions brought them down. But with the rise of the Three Alliances and the return of general warfare across Tamriel, our services are once again in high demand. The mercenaries are back!

Mercenary axes are heavy, and made with only one purpose in mind: smashing or slashing through armor. The haft below the head is sheathed in a cylindrical steel languet, to protect it from being severed and to enable parrying. The lower portion of the haft is often bone, ending in a pointed steel ferrule.

A mercenary's waist cincture is wide, often sporting two or three parallel straps of thick leather, each with its own buckles. The boss at the front may display the sigil of the mercenary's company.

A mercenary's boots are simple and utilitarian, both durable and comfortable, as a mercenary must be able to march for leagues and then charge right into battle.

Mercenary bows are powerful engines, able to drive steel-tipped arrows through all but the heaviest armor. Their limbs are of recurved horn, with small metal shield-plates bolted onto the backs, so the bow can serve as an expedient buckler in the left hand, while the archer draws her short sword with the right.

A mercenary's chest armor is constructed of thick leather, often faced with steel scales or plates. This cuirass is crisscrossed by leather bandoliers for carrying gear or secondary weapons.

The mercenary's broad-bladed dagger is nearly as long as a short sword, made for punching or hacking through the weak spots in a downed opponent's armor. They are not balanced for throwing, but are heavy enough to deliver a solid blow if hurled.

Most mercenary weapons lack crossguards, as mercenaries prefer an active, thrusting parry. Hand and forearm protection are provided by thick gauntlets, overlapped by articulated plates extending down from the vambraces on the forearms.

Mercenary helmets are typically crafted to resemble stylized death's-heads, with fangs and a central "horn"—though some insist that the forehead spike represents the single-digit salute mercenaries give their opponents just before coming to grips.

Overlapping plates protect the front of a mercenary's legs, with flexible leather at the back. The poleyn that protects the knee often features a vertical spike that echoes the "horn" on the helmet.

Mercenary maces have heavy cylindrical heads studded with angular spikes for punching through armor. Like the axes, the maces' upper hafts are sheathed in steel languets, while the lower hafts end in spiked metal ferrules.

Mercenary's shields are shaped like Nords' kite shields, and are almost as large. They are faced with steel and bronze, which few mercenaries bother to lacquer or paint—these aren't ornamental objects, they're working armor pieces, designed to take blows. Why waste paint on them?

A mercenary's pauldrons and rerebraces are thicker on the soldier's main arm, where the most protection is needed. Bandoliers and baldrics are usually belted beneath the pauldrons.

For a spellcasting mercenary, the staff serves as both weapon and shield, and both ends of the haft are often sheathed in cylindrical steel to enable parrying. More than just an ornament, the staff's finial ends in one or more sharp spikes, enabling the staff to be used as a half-pike in a pinch.

A mercenary's sword is broad and heavy, like a falchion, designed as much for battering as for slashing. Only the forward edge is sharpened; the back edge is designed to take blows, or to deliver a thrusting parry.