Akaviri Style is a craftable armor and weapon style in Elder Scrolls Online. This Style is divided into several motif book chapters: one for each weapon type and one for each armor piece. It was made craftable by the Orsinium DLC.

Where to find Akaviri Motifs

Chapters of this style can only be purchased from the WAR RESEARCHERS in the ARMORIES at the entrance gates to Cyrodiil for between 100k and 500k of Alliance Points. 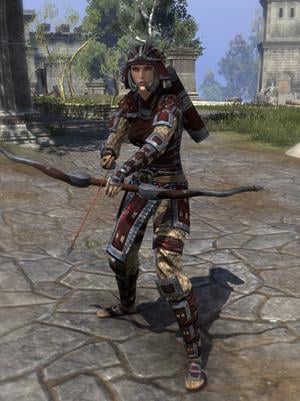 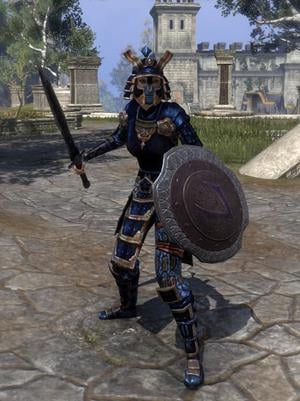 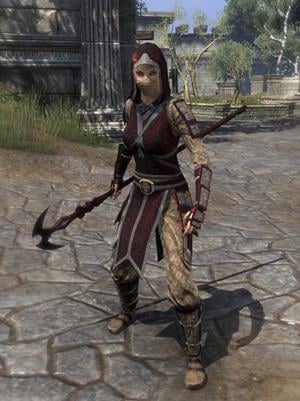 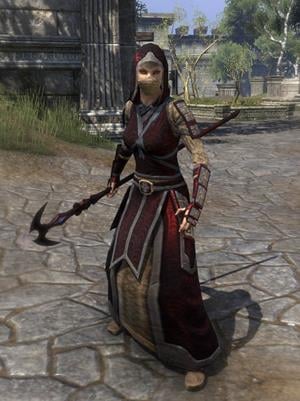 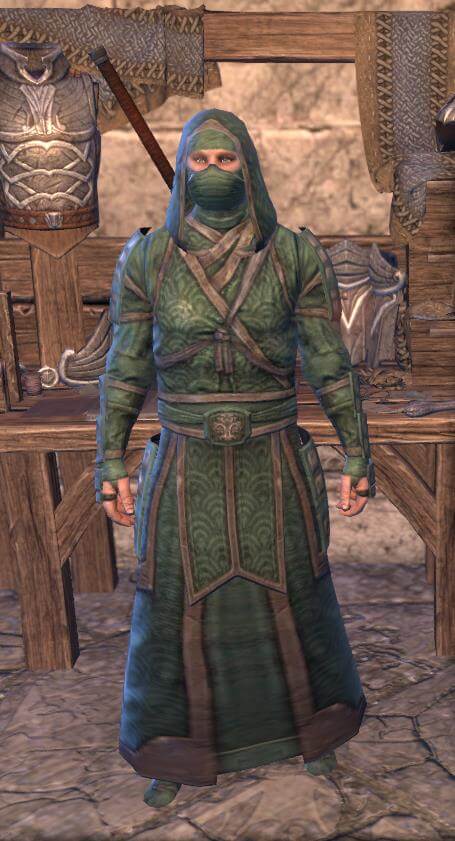 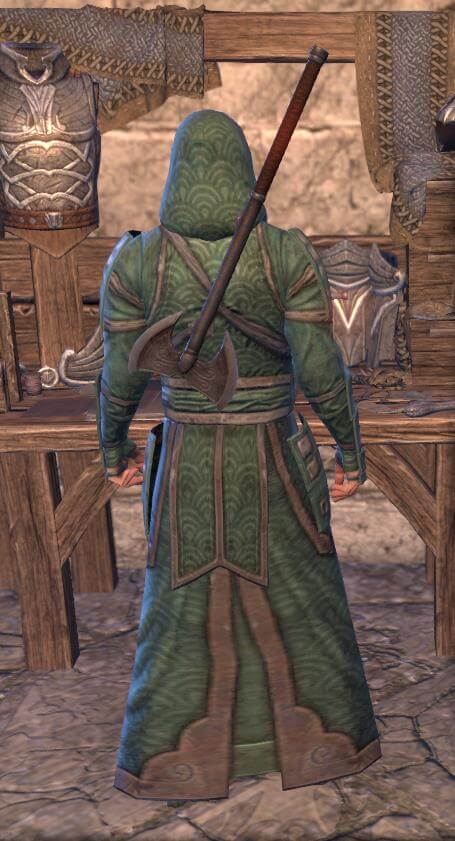 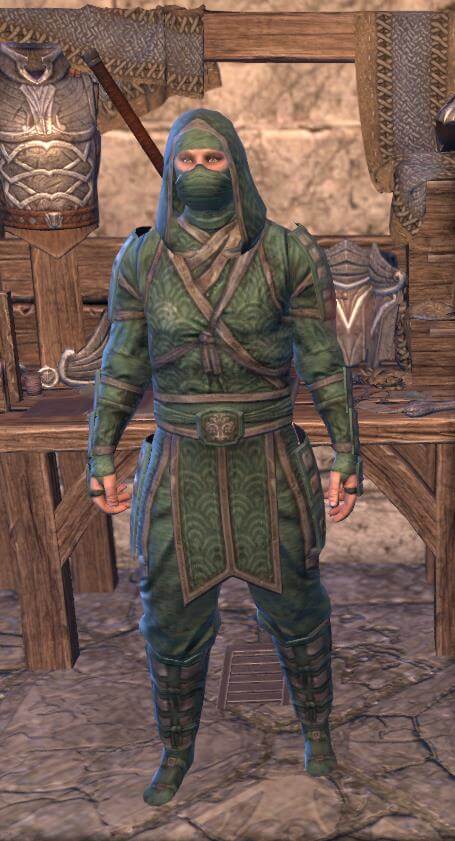 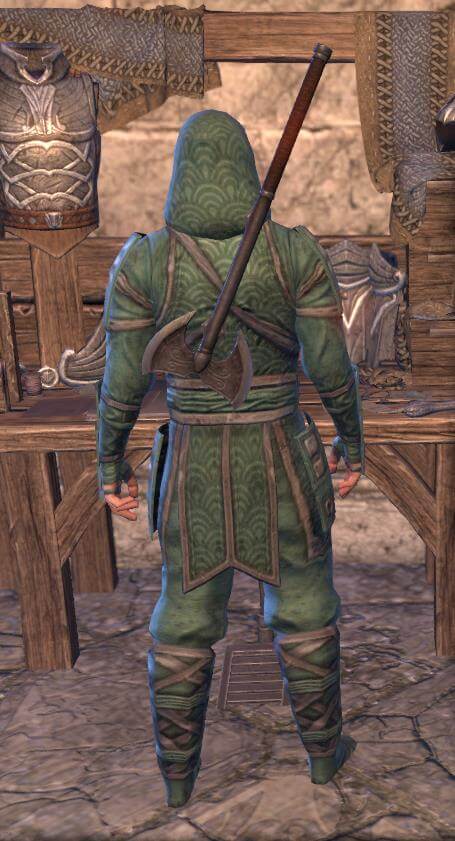 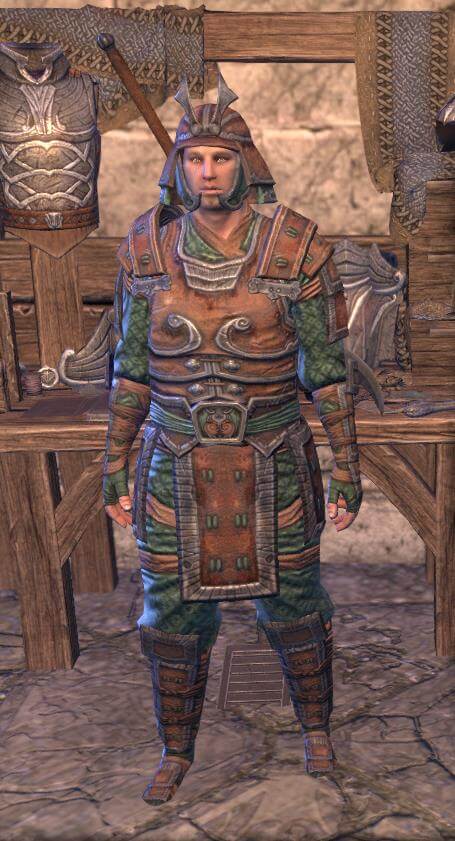 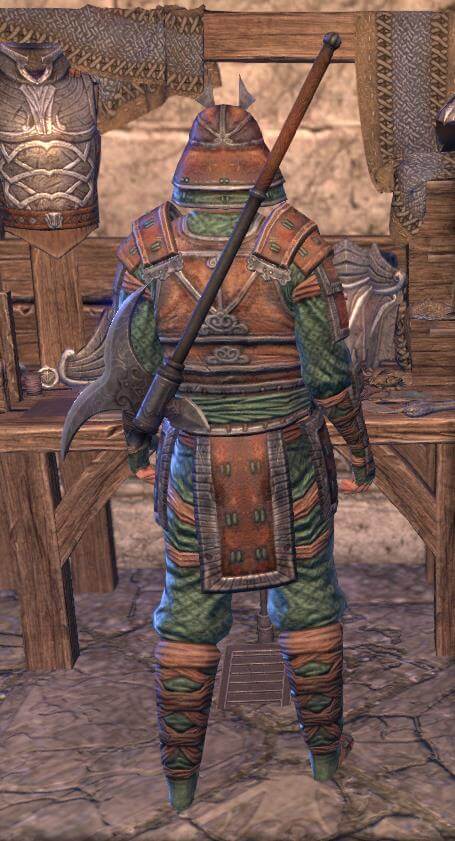 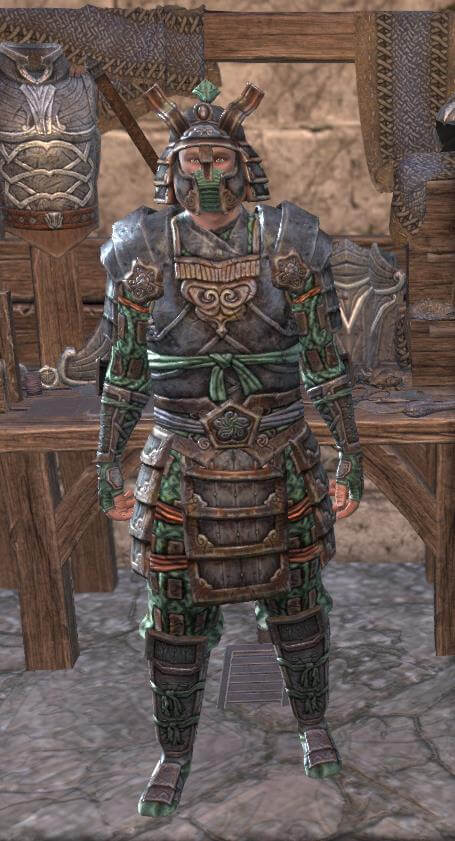 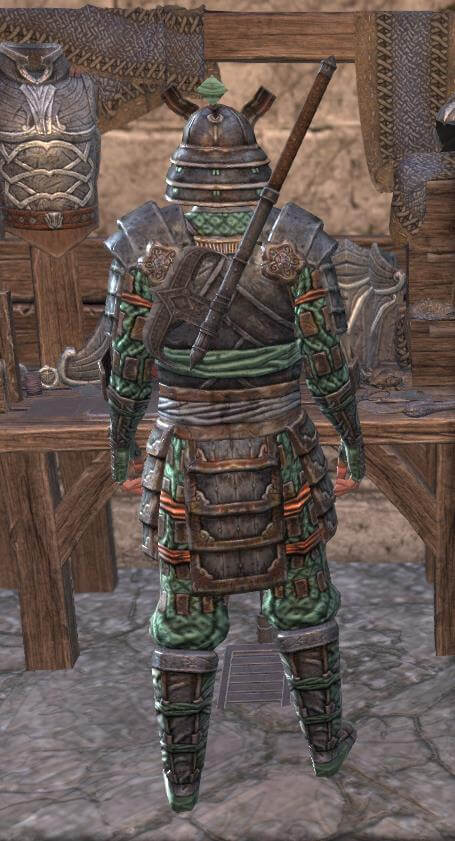 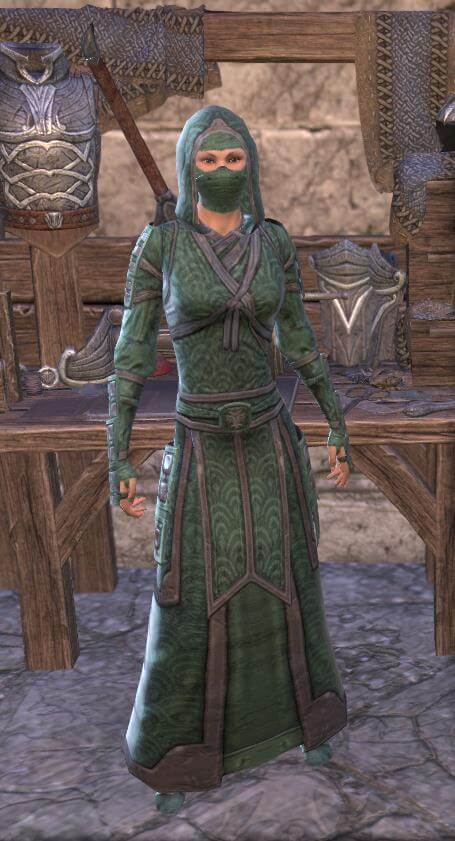 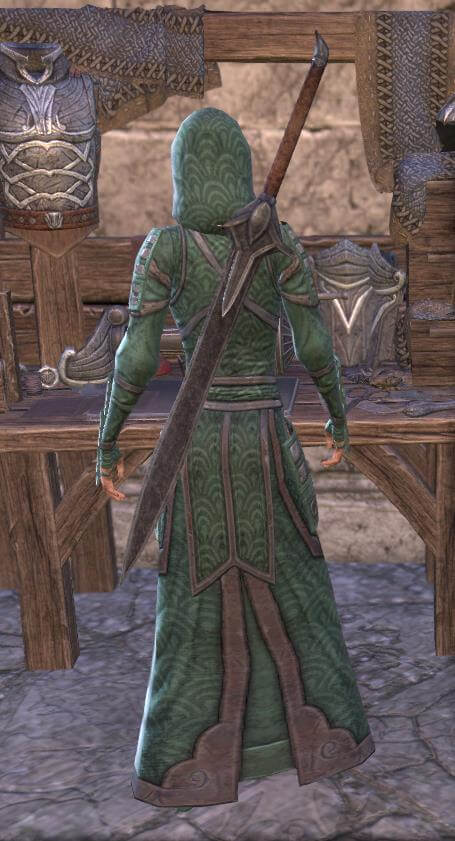 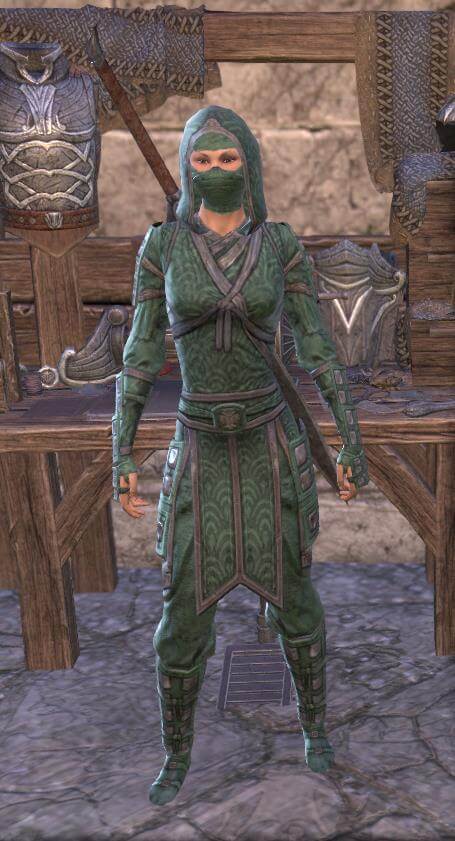 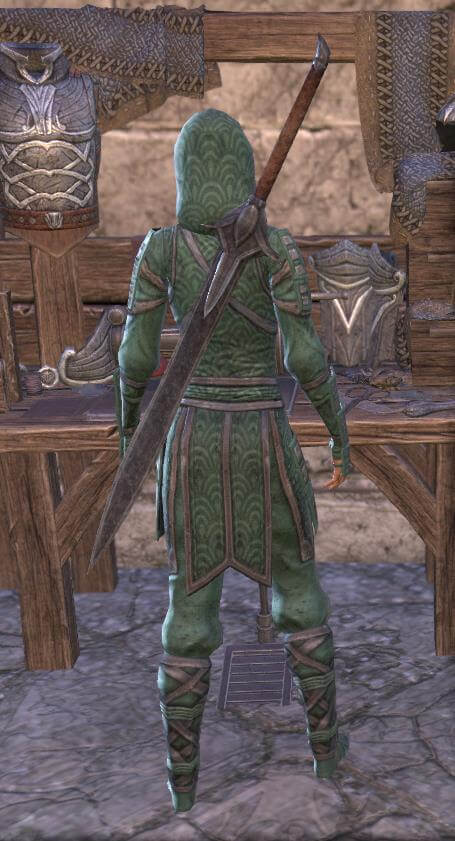 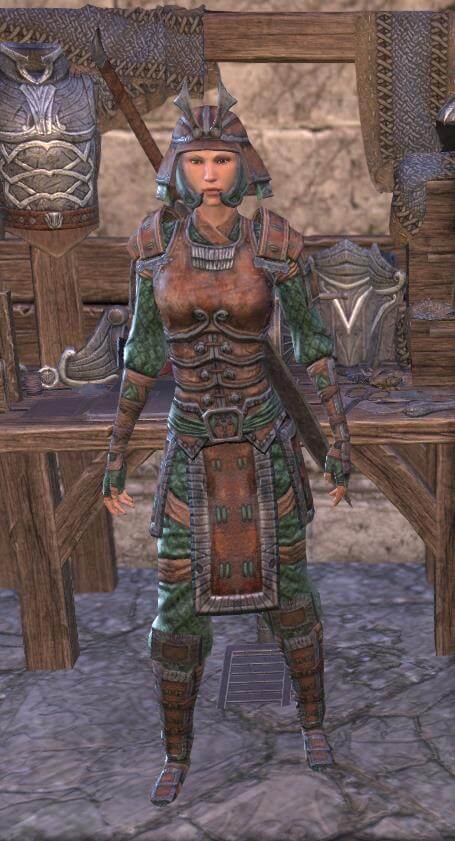 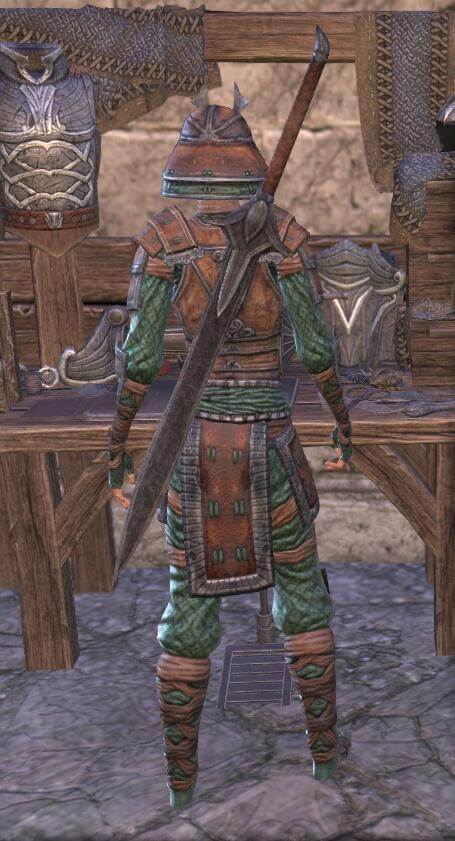 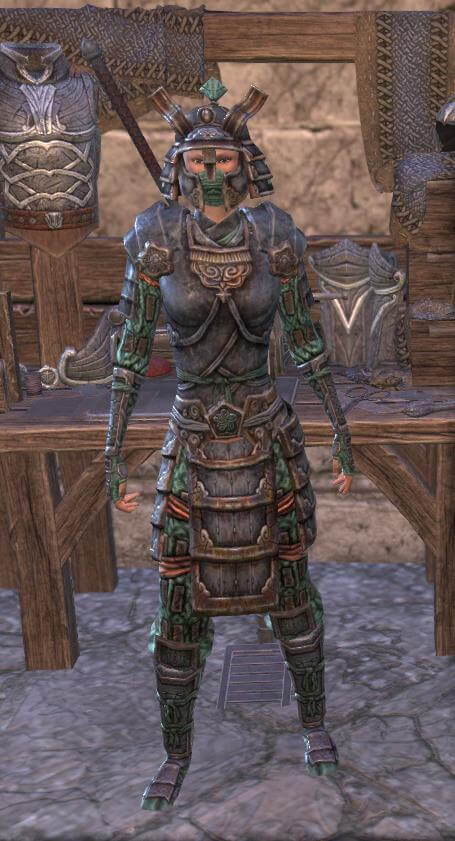 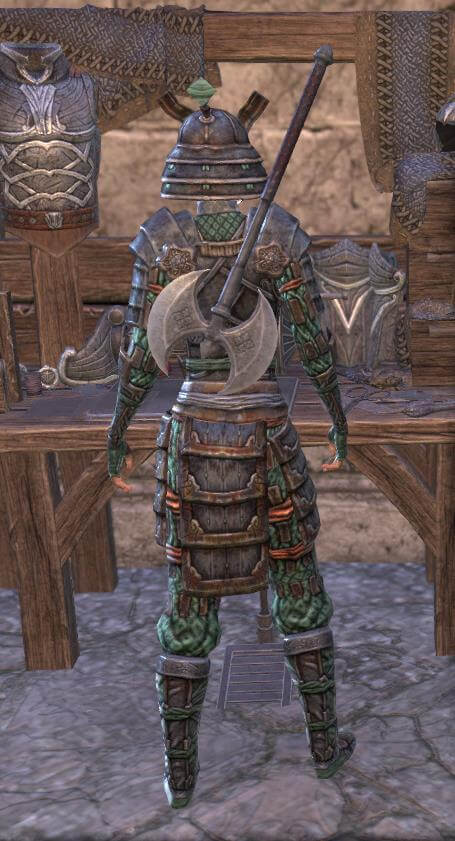 King Jorunn wants a description of the Akaviri styles of arms and armor written by someone who knows them. I don't think anyone killed more Akaviri than I did during the recent invasion from Kamal, so I guess that makes me an expert in their wares of war. Besides, who else was I going to get to write this? Rigurt?

Kamal, the region of Akavir where the recent invaders hail from, is said to be icy and snow-covered, so it's no surprise that Kamali axes resemble those made by us Nords of Skyrim. The one-handed weapons, in particular, are clearly descended from the kind of ice-axes we use when crossing glaciers or scaling icy peaks.

An Akaviri belt usually sports a prominent boss on its buckle, with an abstract sigil that's probably clan related. These symbols are always symmetrical, and usually made of flowing designs. For several years I wore one taken from an officer I slew, and it was strong and well-made.

Boots of the northern Akaviri tend to be simple and utilitarian, for trudging through the deep snows of Kamal. Those of the southern Tsaesci are more elaborate and decorative, with shoes and sabatons that look like Imperial sandals, though armored with thick leather or small metal plates.

The Akaviri use composite bows with recurved ends made of horn. Though painted with metallic lacquer, don't be fooled: their bows are not made of metal, nor do the Akaviri have the giant's-strength it would take to bend them if they were.

Akaviri chest armor is worked of forged from familiar materials- padding, leather, steel- and usually decorated with a triangular or pyramidal shape, upper point toward the gorget.

Akaviri daggers are pretty, but don't be fooled: they're made for killing, and if you get downed on the battlefield, expect to feel one of these in your armpit or groin. As with the swords, the curved ones are Tsaesci, and the straight ones are from Kamal.

Akaviri weapons have narrow guards, which leaves hand protection up to their gauntlets. These usually have thick armor on the back of the hand, while leaving the fingers free and open for a solid grip on weapon and shield.

The Tsaesci helmets I've seen in museums, or imitated by Fighters Guild warriors, sport layered neck and side armor, and often have elaborate double crests that look like horns or antlers. Kamali helmets, in contrast, are simpler, though they also cover the back and sides. Lots of Akaviri helmets of both kinds include visors or some other form of partial face coverage. The troops found some of these unsettling, even creepy.

Akaviri greaves always look like extensions of their sandal-like boots. I could never tell where one ends and the other starts.

Kamali maces usually have rectangular heads, while those of the Tsaeci are round. Both kinds are studded all round with wicked spikes. They're going to hurt you, even if you're wearing heavy armor.

Shields from Kamal tend to be metal-edged wood from the northern forests, while shields from southern Tsaesci are more likely to be curved sheets of steel. These often sports symbols echoing the crests on the warriors' helms.

Unlike the triangular designs on their chest armor, Akaviri pauldrons and shoulder cops are always articulated rectangular or square plates. Why? Who knows?

An Akaviri mage prizes his or her spell staff, and they are often splendid and lavishly decorated, trimmed in gold leaf and sporting great red gems. The hafts of these staves are made of a dense, flexible wood unknown in Tamriel, able to deflect even a great axe.

The Akaviri seem to love their swords almost as much as the Redguards, their long blades are among the finest I've ever seen. When you heft one of the curved Tsaesci swords, you can feel how it could shear right through a soldier's limbs. And the straight blades of the Kamal are no less dangerous.