Abah's Watch Style is a craftable armor and weapon motif style in Elder Scrolls Online. Styles can also be equipped cosmetically by using the Outfit System, including non-craftable styles.

Where to find Abah's Watch Motifs

Chapters of this style, and on occastion the whole book, can be found in the Large Laundered Shipments acquired by completing the Thieves Guild Tip Board quests in Hew's Bane. You must complete all optional objectives to qualify. 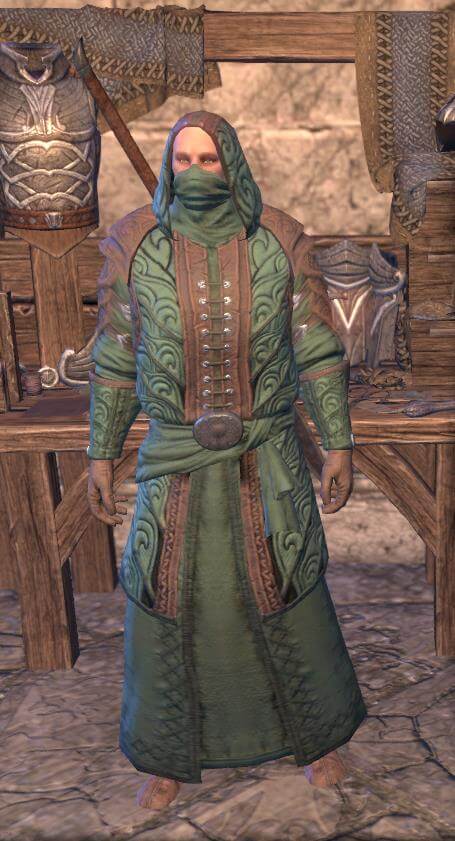 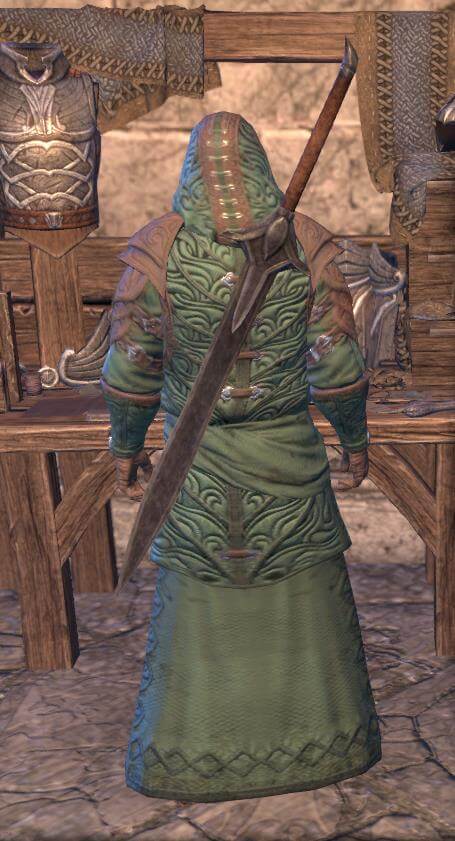 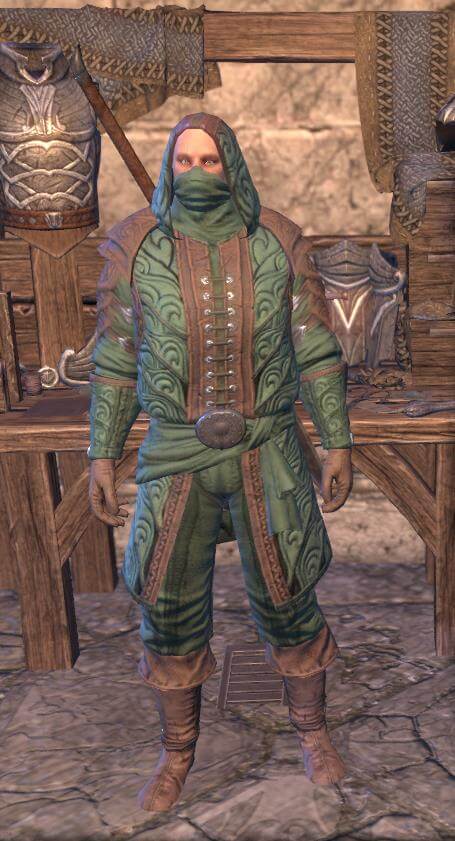 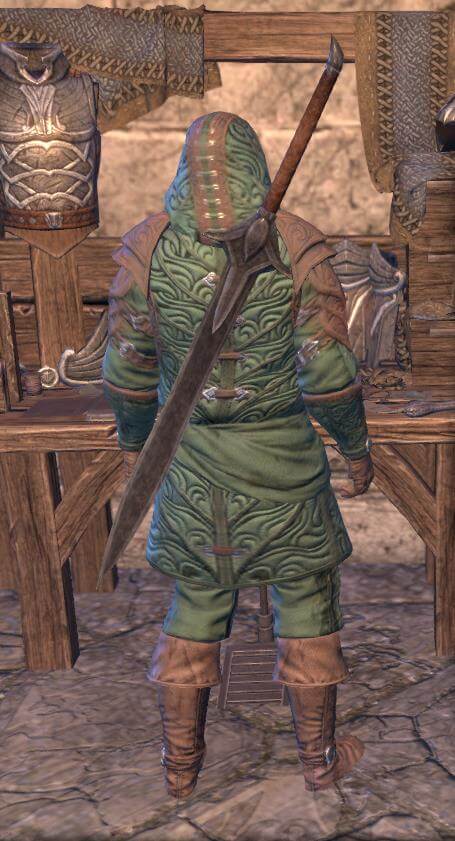 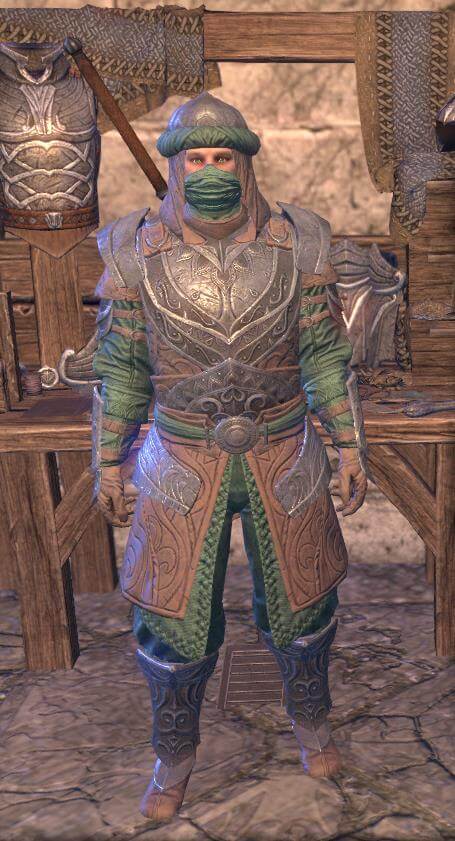 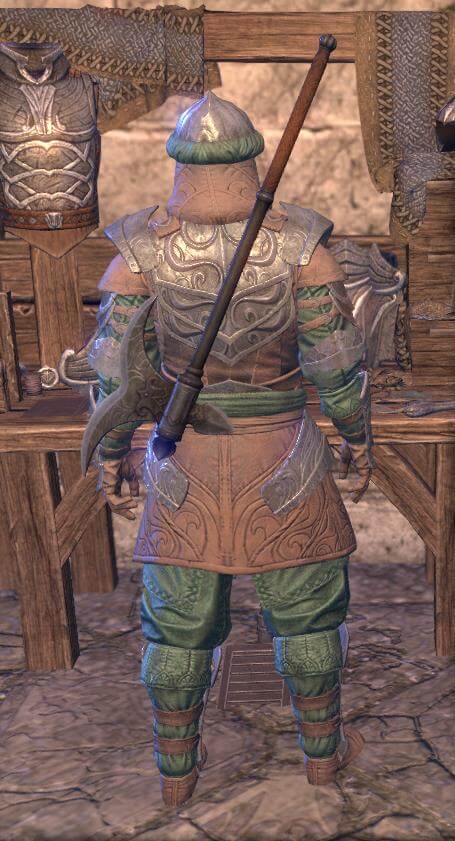 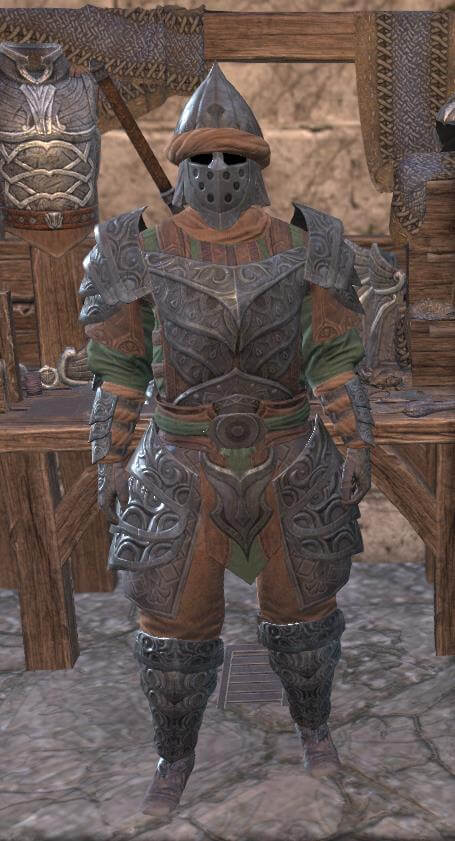 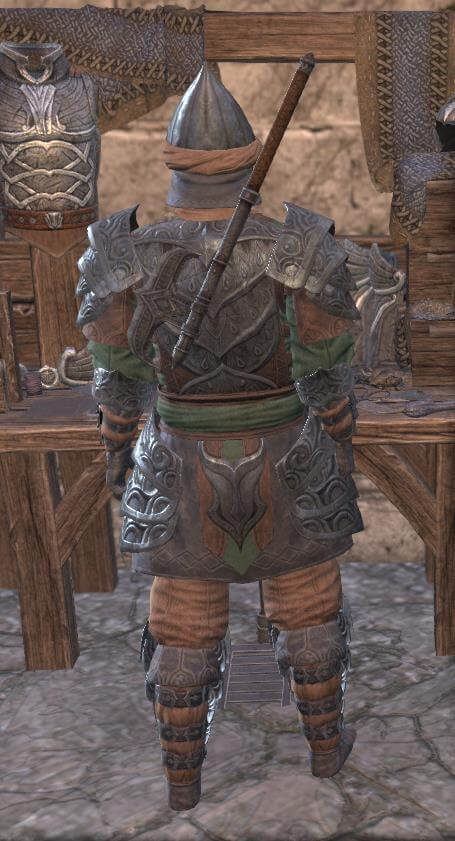 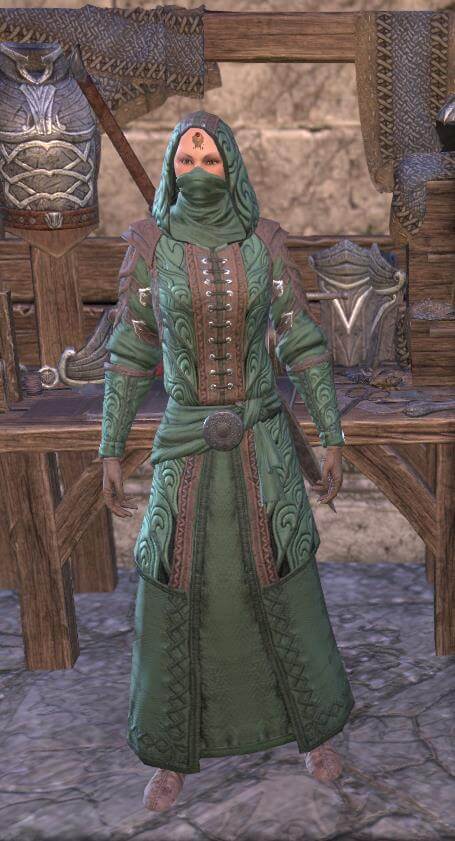 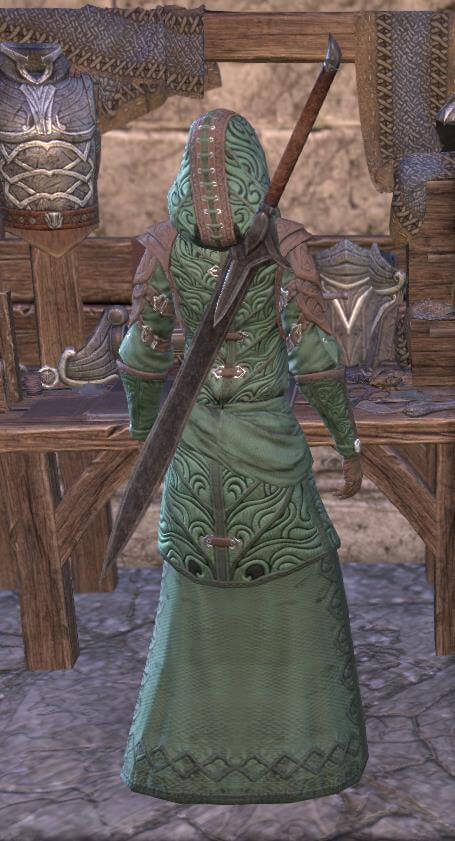 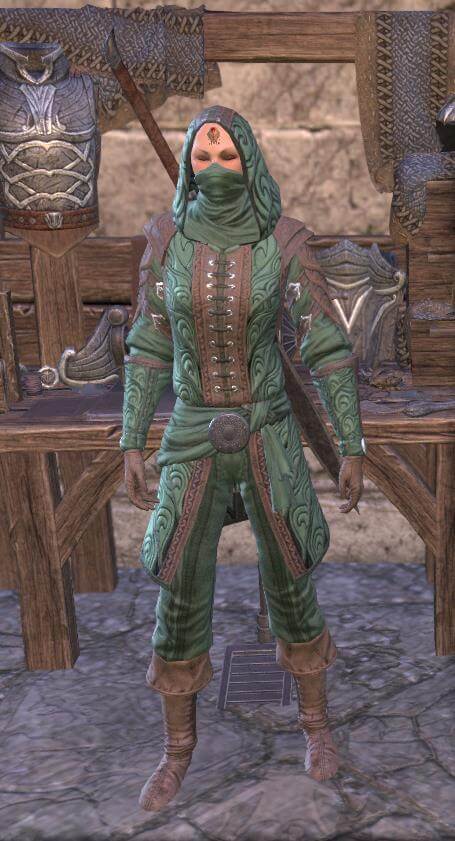 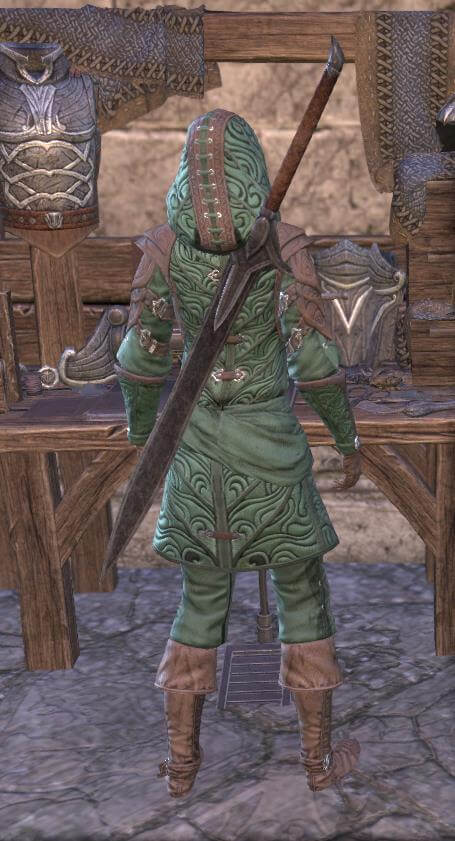 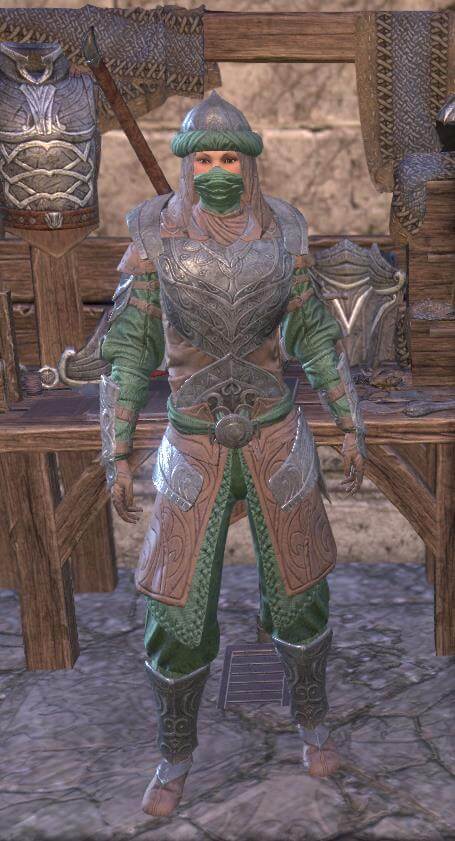 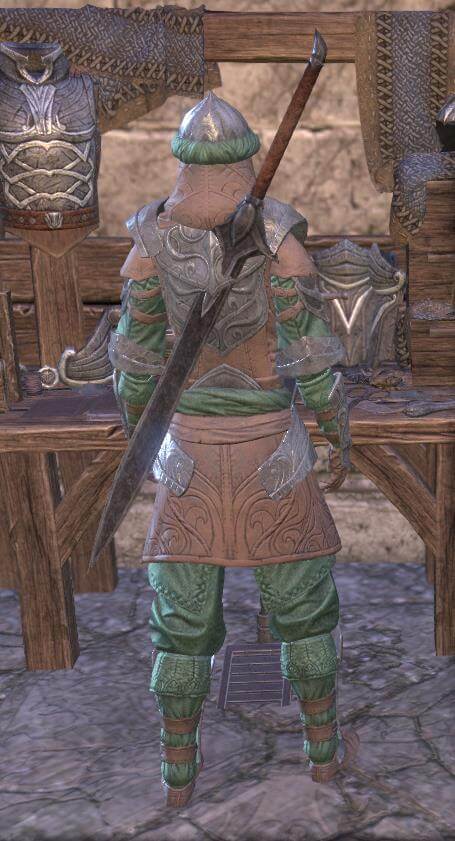 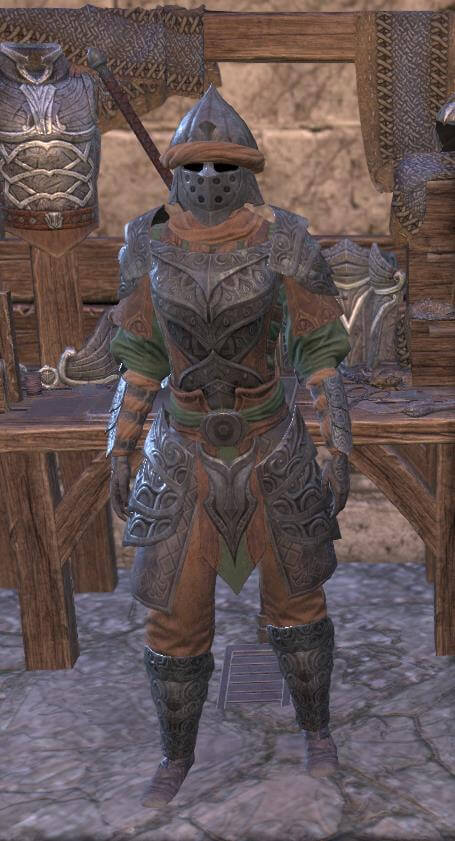 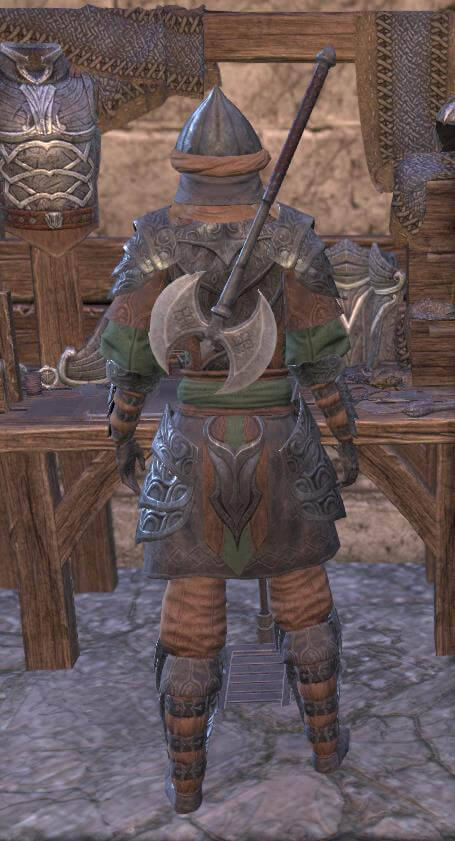 I just sold that Iron Wheel outfit a load of first-quality arms and armor—good enough that our own Abah's Landing guards are going to look shabby in comparison, and that's not going to do. We need to show a united front to the Wheel, with a standardized look to our guards. Based on what we've got in the warehouses, let's equip them as indicated below.

We have a number of those axes with the double-crescent blades down in the water-level warehouse. They're very similar to what I sold the Iron Wheel; let's equip our own axe-wielders with those arms.

That shipment of heavy wool sashes we got from Rihad will do fine as belts: just put a round metal boss on front to cinch it through, and hang metal tassets at the hips for the more heavily-armored guards.

The basic goat-leather boots shipped in from Senchal ought to do fine: we have plenty of them, and nobody looks at a guard's feet anyway. But make sure they have good quality straps at the ankle to attach to the bottom of the greaves.

We're arming town guards here: they don't need to shoot arrows at battlefield ranges, so there's no point in giving them powerful (and expensive) composite bows. Simple self bows will do fine—and as a matter of fact we just got a ship load of those from Velyn Harbor!

It was smart to buy out that entire shipment of mix-and-match layered cuirass pieces from that forge that went out of business in Satakalaam. We sold most of them to the Iron Wheel, but there are enough pieces left over to equip our own Abah's Watch guards.

Redguard blades—swords and daggers—are just the best, even simple, relatively plain stabbers like those crates of used weapons we got from the school at Leki's Blade. They may have been forged as practice blades, but they're none the less lethal for that. Make sure every one of our guards has one of those simple curved daggers.

When we bought those Satakalaam cuirasses, I got them to throw in two crates of matching gauntlets constructed along similar lines: a sturdy leather base that supports layers of mix-and-match plates mounted on top. Those are good combat gloves; it's almost a shame not to sell them. But the guards must have gauntlets!

We sold the Iron Wheel three crates of those turbaned conical helmets from Gilane. I think we have one crate left, so let's issue those to the Abah's Watch guards. If we run out of the conical helms, give them metal skullcaps to wear under the turbans.

The greaves we're using follow the same design principle as the gauntlets and cuirass: they're heavy top-grain leather lined with strap-points for buckling on layered metal plates. Leave off the metal plates for the guards working beats on the docks—if they fall in the harbor, we want them to be able to get out again.

We got the maces from the same forge as the axes and shields, and they have that same double-crescent motif, in this case as the shape of the sharp flanges on the maces' heads. That double crescent: I wonder what it means?

Even after equipping the Iron Wheel, we still have a lot of those round shields faced with the double-crescent design. Put a slightly different tint on them and issue those to our guards.

We have a fair number of sets of pauldrons from Satakalaam that match the cuirass and gauntlets—heavy leather with attachments for overlapping metal plates. In for a copper, in for a drake: might as well give those to the Landing guards as well.

In the warehouse at the outer harbor you'll find a dozen spell-staves topped with double-crescent finials. That ought to be enough to equip our spellcasting officers, and as a bonus they match the design on the axes, maces, and shields.

We got both one-handed and two-handed swords from the school at Leki's Blade, and from their quality and condition you'd never know they'd been used as practice blades by students for years. Redguards take care of their swords like nobody else.