Mazzatun Style is an armor and weapon style in Elder Scrolls Online. This Style is divided into several motif book chapters: one for each weapon type and one for each armor piece 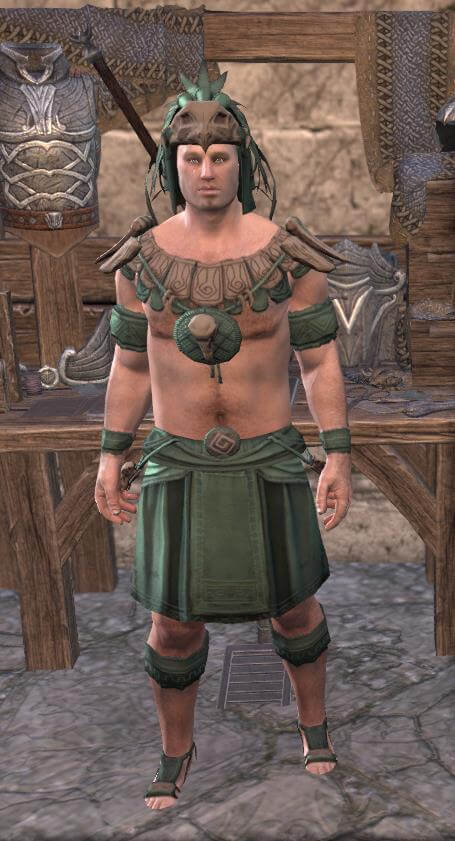 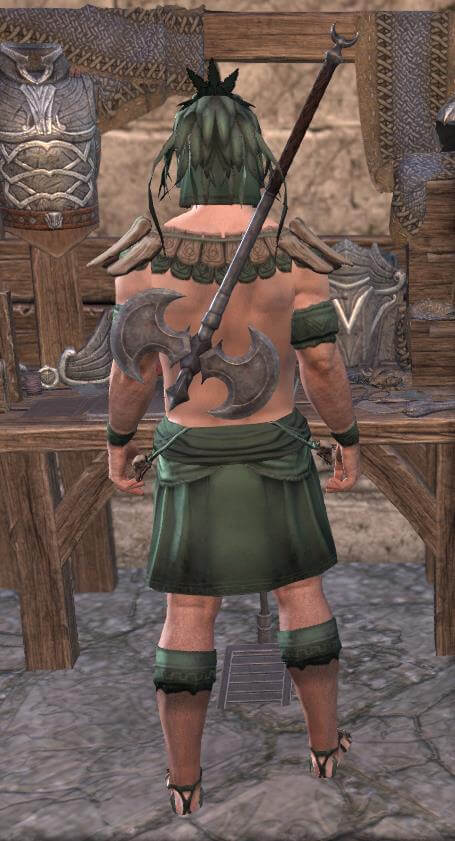 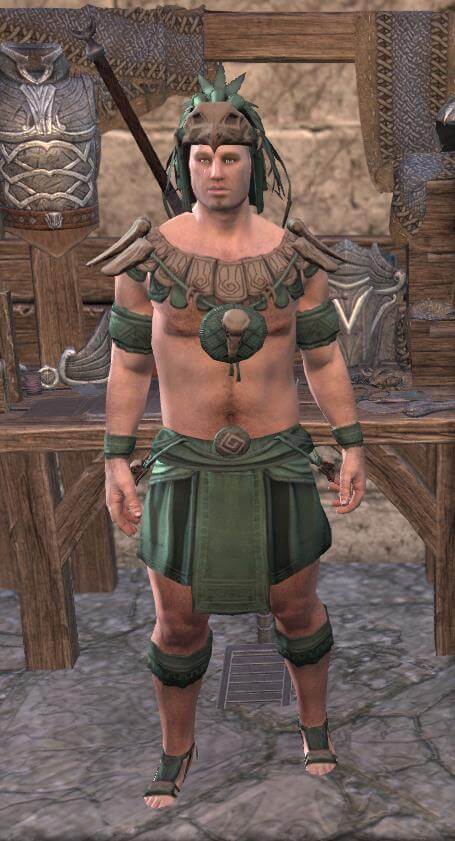 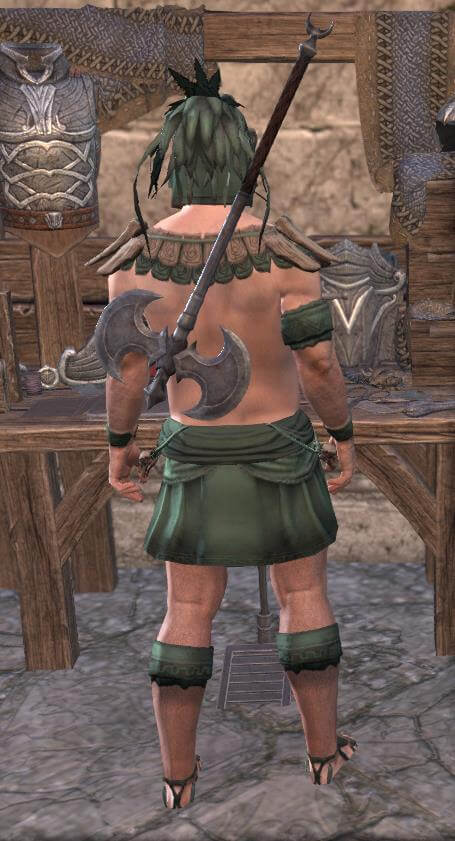 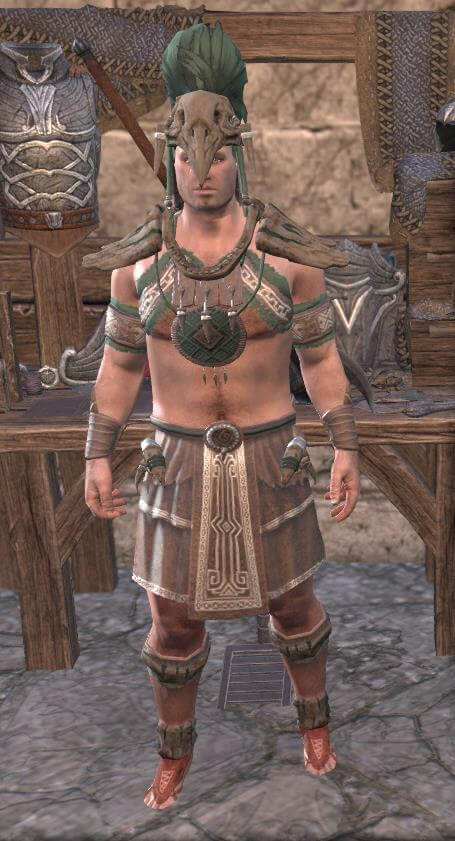 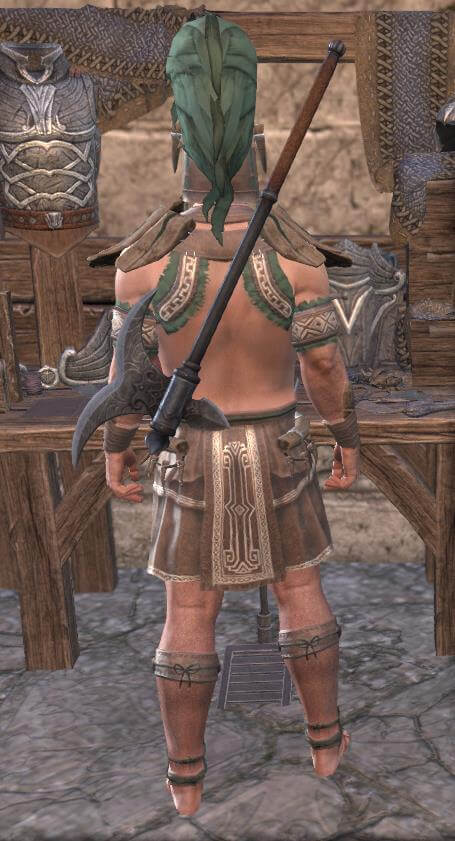 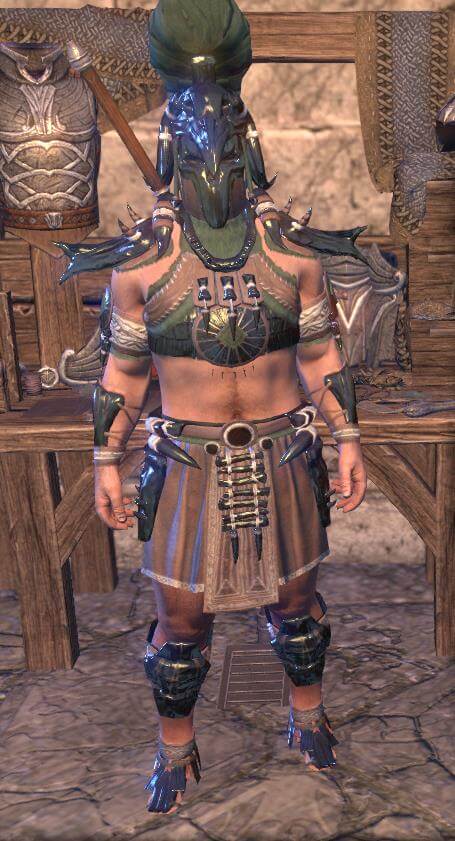 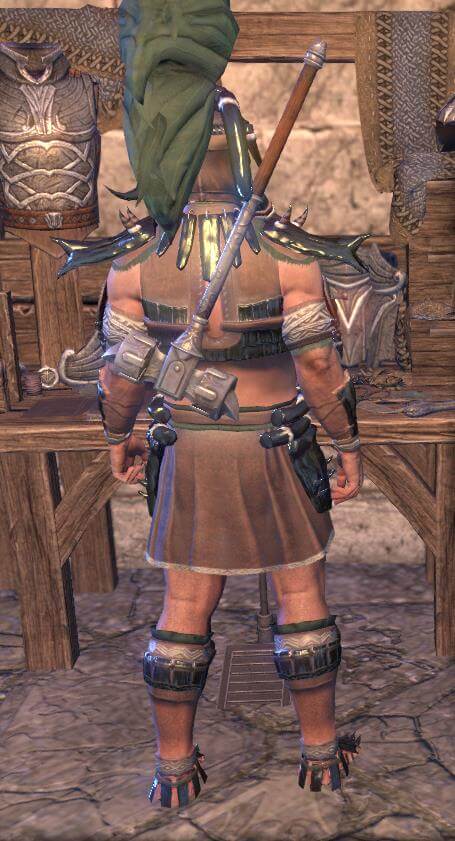 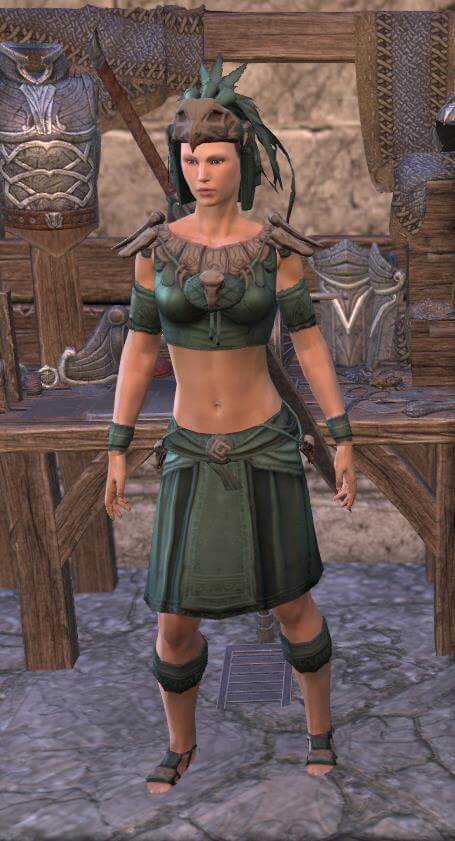 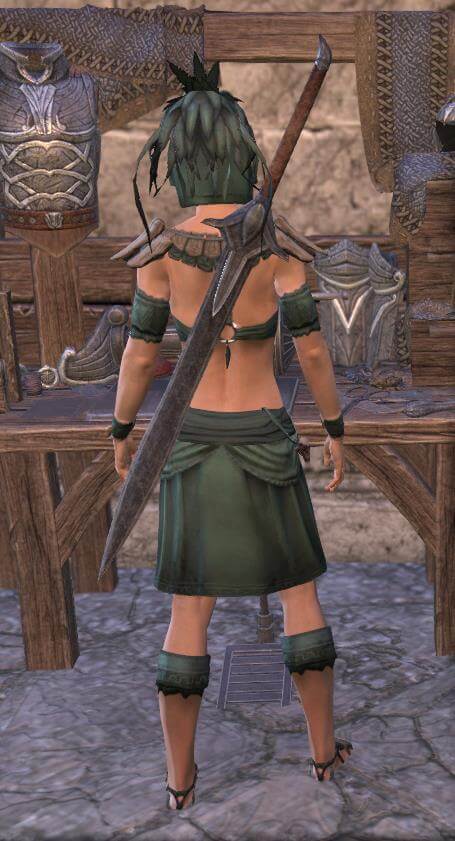 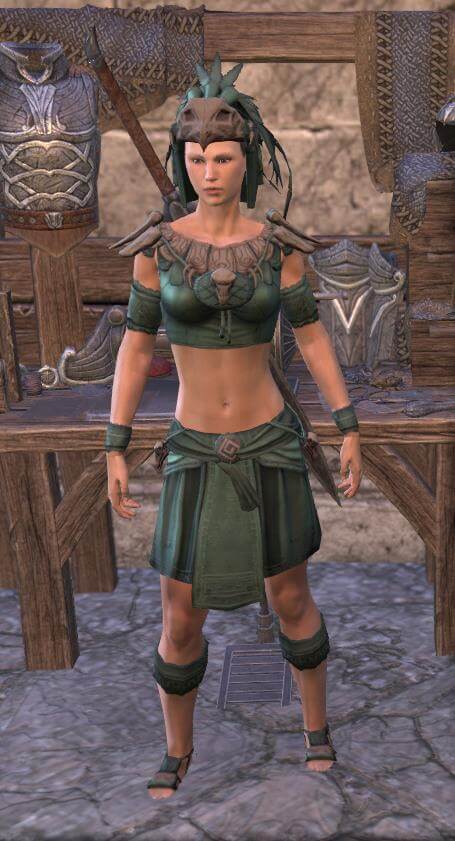 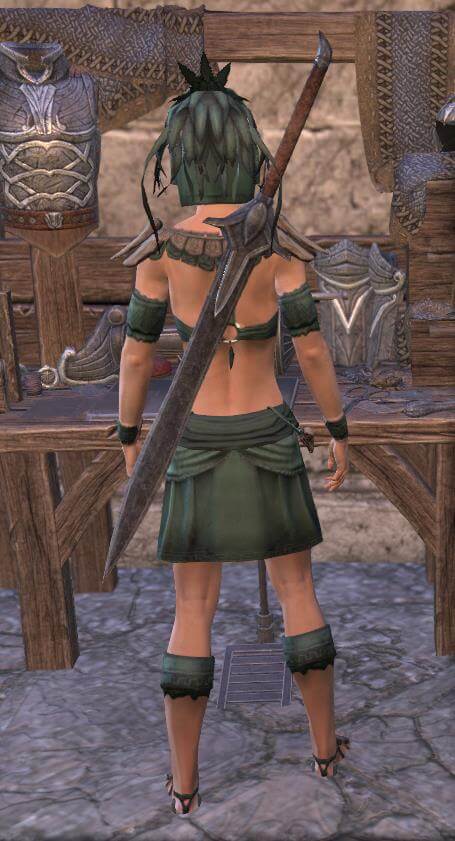 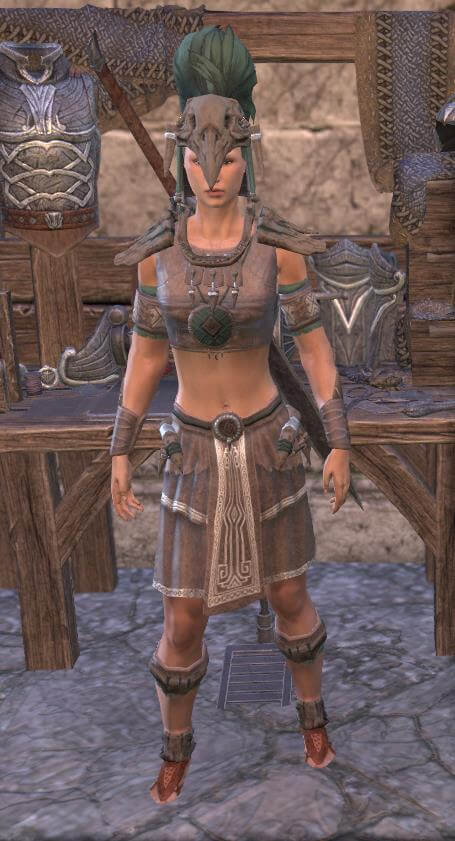 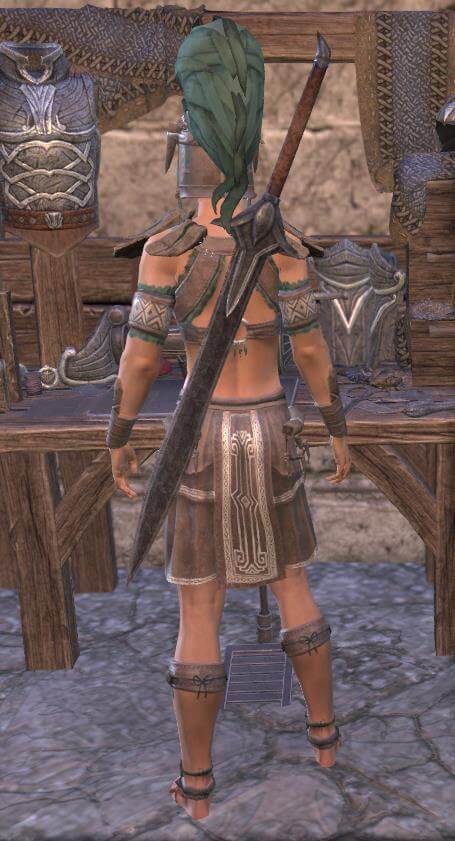 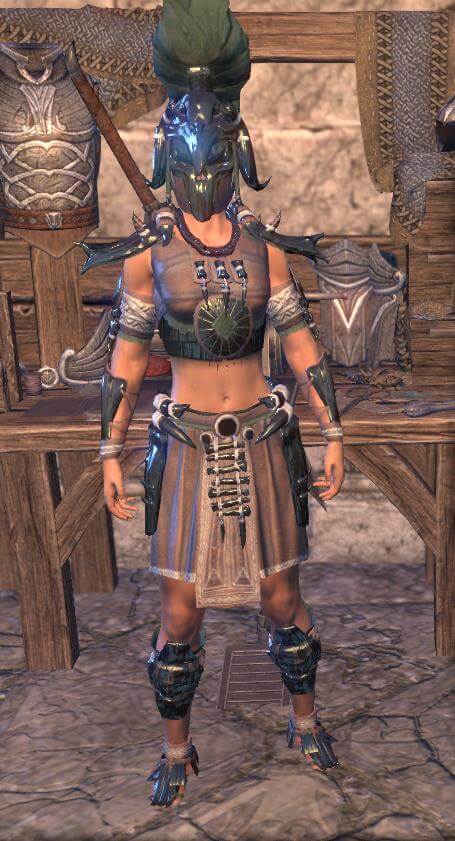 try to catalogue the arms and equipment of all the deep marsh tribes—it helps our fighters identify who and what we're up against. This Mazzatun gear, with its panoply of plumes and avian and reptilian skulls, is particularly garish. That's fine by me: it makes identifying it all the easier. What follows are brief descriptions of arms and armor of Mazzatun origin, both for the record and for the use of guild fighters in the field.

Much like the ruined city's stone, the war axes of Mazzatun tend to be made from reclaimed detritus. Often they are nothing more than the repurposed splinter of a sword lashed to a hewn branch by leather straps. Crude, but effective enough for butchering unarmored combatants and rebellious captives.

Belts range from sashes of cloth and fur, to intricately woven and braided leather or fibers. One this is consistent, if not make or material: the spiraling path sigil of Mazzatun is featured prominently at the navel. If there's any significance to that, I'm sure there are eight books on the subject you can reference at the Mages Guild.

Footwear is light, if worn at all. Sandals are the preferred dress of warriors, soled in thick hide or bark. Bone, shell, or other inflexible materials are sometimes strapped around the ankles and shins for protection, but I'd say they're still fair game for a hobbling strike.

Mazzatun missile weapons are mostly thrown, but simple recurved bows are favored by their most keen-eyed warriors. Most are made from flexible swamp reeds, but be on the lookout for plumed wooden bows. They are a sign of distinction among tribal archers and a good indicator to take cover.

The primary protective material of Mazzatun gear is bone, and while it might not seem like much, it's deceptively effective. Layers of bone splints offer protection and flexibility nearly as good as steel scale mail, and thick horns, tusks, etc. will stop even a forceful strike. Mazzatun armorers appear to lack the means to adequately protect the abdomen, so their warriors are most vulnerable at their bellies.

Proper daggers are rare and appear to serve mostly ceremonial purposes. THe short blades most likely to be seen int he hands of a warrior are machetes meant for clearing vines and scrub. But I have seen one hack into a sword arm through a steel vambrace, so overextend your guard at your own risk.

A combination of leather bracers and armlets do the heavy lifting for arm protection. These are often reinforced with thick plates of bone and steel bands, but even the lightest armor will add wraps of stone beads for rigidity. They sometimes contain flint used to ignite alchemical concoctions and oil.

A basic leather hood is the foundation of most Mazzatun headgear. Beyond that, the functionality of the helmet falls away in favor of grand displays or personal status based on how many ostentatious layers of skull and plume can be mounted to it. Occasionally these ornamental features happen to serve to protect the skull beneath it all.

Leg protection is minimal, as the inhabitants of Mazzatun favor loincloths as their primary dress. Occasionally a warrior will hang bone plates from their belt or strapped to the front of their knees, but for the most part they leave their legs bare. Take advantage when you can: they move fast over this mucky terrain.

For its simplicity, I can't argue with the design of a Mazzatun mace: a simple hardwood sphere mounted to a wooden shaft and studded with steel. The whole thing vaguely resembles a bird with bright plumes on the back of its head and a steel-spiked "beak" on its face.

Shields are elaborate affairs, combining wood, reed, stone, bone, cloth, feathers, and steel. The face is primarily bone plate stitched together around a central stone stud. The reed construction is light, and durability is questionable. Keep hammering and the whole thing will fall apart eventually. Mind the horns on the rim, or you'll find one jutting into your throat.

I don't know why the Mazzatun gear puts so much emphasis on protecting the collar, but the bulkiest bones tend to find themselves strapped around the neck and shoulder. Sometimes you'll find the entire jaw of a large beast draped there. Maybe a collar is just the easiest thing to waer when you lack modern armoring techniques.

I have yet to identify a meaningful difference between a ceremonial staff and a battle staff among the Mazzatun inhabitants. They typically seem to carve them from fallen branches of their tribe's Hist tree. Animal—and other—skulls are the usual ornamentation for the head of the staff. Usually the skull selected bears some significance to the wielder.

Little of the Mazzatun warriors' weapons and armor contain worked metals, with swords being the primary exception. Obviously they're a favorite for combat, but they also pull double duty as tools. These oversized machetes can hack through most vegetation, and the teeth on the back edge make a passable saw. Between those and the scale-like carving along the flat of the blade, I think the blades are supposed to resemble the native Wamasu.