Selene's Web is a 4-man dungeon in Elder Scrolls Online. It is located in towards the southwestern corner at Reaper's March. The dungeon is a cave filled with poisonous spiders and other creatures. The Island has a total of 6 bosses, of which 3 are mini bosses. Players can use the Group & Activity Finder tool to easily find groups to tackle this dungeon with.

Selene's Web, as the name suggests, is set around a spider-infested cave. The bosses mainly deal poison damage, so come prepared. The bosses are not difficult to defeat if you have in your group a tank, a healer and two dps.

Boss Mechanics: This boss is assisted by ads. Kerminn uses a raven AOE which essentially pulls all players towards him and then pellets them with ravens that do medium amounts of damage. The AOE is marked with a red circle under Kerminn and can be avoided by staying out of that circle. Kerminn also does a Whirlwind AOE which can be avoided by staying away from the area during the attack.

Strategy: Deal with the ads first, and just avoid the occasional AOE. The miniboss should be an easy kill.

Strategy: Attack and kill the named Panther spirits first to activate Longclaw. Don't try to kill his Senche tiger spirits as Longclaw would just immediately summon more upon death. Instead manage or control the spirits using your standard AOE crowd control tactics. Avoid the simple AOE attacks that Longclaw uses and just rain down fire upon him till he dies.

Strategy: It is important for the player who gets a red circle cast on him to stay away from the rest of the group to avoid causing them damage. The random cone attacks can be easily avoided. The Queen has low health and can be finished off quickly.

Strategy: Just avoid the heavy charges and stomps and you should be fine. Foulhide is a large bear that can deal large amounts of damage, but his size is also his weakness. He is big and slow, making it easy to avoid his attacks.

Strategy: Deal with all the ads as they are summoned and attack Mennir Many-Legs in the meanwhile. He should be easily defeated.

Strategy: The fight will take place in 2 stages. First you will have to defeat Selene as a giant spider. When her health is halved, she then turns into a more human form in which she does more damage than the previous stage. The key to defeating her is to use Stamina to break free of her webs and quickly deal with the spawned ads, especially the healers. Attacking Selene constantly is the best way to defeat her. 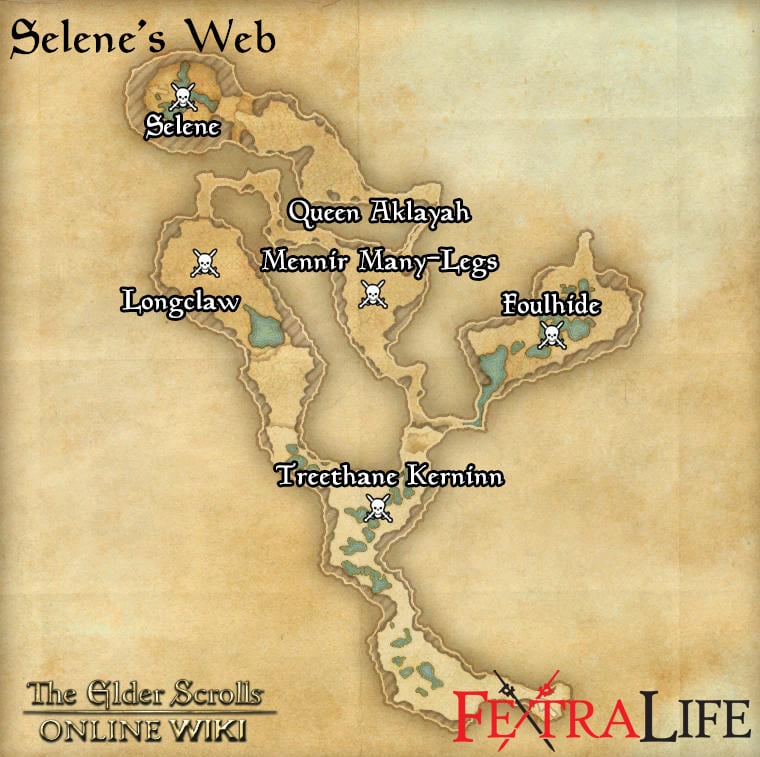