Chasing Shadows is a quest in Elder Scrolls Online.

I've been summoned back to the Harborage in preparation for our battle against Molag Bal. 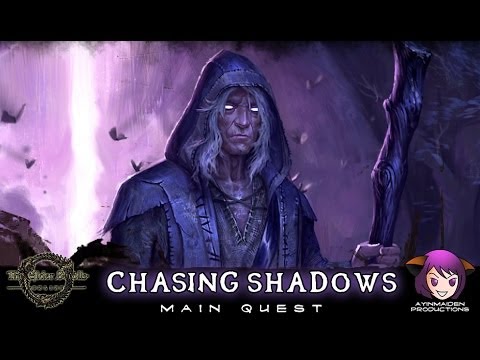 Text Guide:
Once you reach level 15, you will hear The Prophet's voice. He will ask you to return to where he has been hiding.
He will tell you about an agent of evil in the nearby city. Head into town and speak with the two NPCs to learn more about the agent's whereabouts. Head to the location and proceed through the small cave to find the agent. He will be level 15, and is quite tough for players who are fresh to 15. If you end up struggling, try coming back a level or two later.
Once you beat him, interact with the orb. After speaking with the projection, the real agent will show up. He will be about the same strength as the first, so if you beat the first one, you'll likely be able to take down the second. Once defeated, head back to The Prophet with this new news. After doing so, speak to Lyris to complete the quest.

Back to Walkthrough Index | Auridon Quests