Castle of the Worm is a quest in Elder Scrolls Online.

I must find a way into the Castle of the Worm. There will be many dangers ahead, so I must make sure I am prepared. 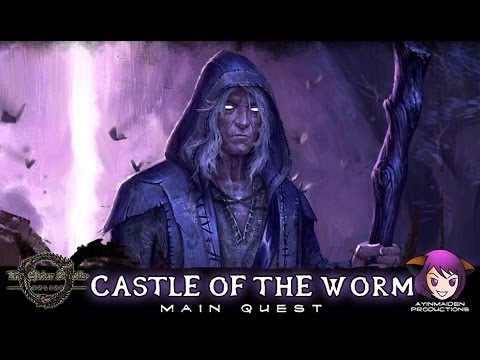 Text Walkthrough:
This quest will become available to you upon reaching level 20 and reaching a major city. The Prophet will ask to speak with you.

When you arrive, he will inform you that Tharn wishes to speak with you. Talk to him to learn that he will aid you, but for a price, you must go free him fromColdharbour. Agree to do so and a portal will appear for you to go through. Once there, you will be tasked with gaining information. Speak with the NPC to learn that you must seek out Cadwell, the man who helped you escape the first time.

Use caution as you enter the house he is in, as Cadwell is guarded by a powerful enemy fighter. His strength lies in his charge attack, so make sure to dodge out of the way or else he will plow over you and likely kill you. Once dead, speak with Cadwell and he will agree to help you. Follow the marker to the next zone, then fight your way through the clannfear with Cadwells help. Once you reach the end, you will part ways with him as you enter the keep.

Continue with Lyris until you find Tharn again. He will instruct you to find Atronach parts. You will need to liberate these from functioning Atronachs, so make sure to kill all of them. There are also some being guarded by a large demon. Use caution when you engage it as he is very powerful. Try to let Lyris take the hits, and if he comes after you, back off until it switches back to Lyris. Once you have enough parts, meet up with Tharn in the ritual room.

Perform the ritual, then travel down the tunnel and into the next room. Your path will have many enemies on it now, so fight your way through them carefully until you reach the real Tharn. After speaking with him, you will get in a fight.

Mannimarco will summon skeletons to fight you. Even at a higher level, these can be tough to beat. Go for the mages first as they tend to do the most damage. Beat the first wave and he will summon another. The third time he will instead summon a large bone fiend. Let Lyris fight it most of the time, and you will be fine. If it comes after you, back away until it goes back to Lyris. Once dead, Tharn will appear and the two mages will get locked in a battle of power. Go up and hit Mannimarco to end the fight. Now exit the area, and when you get on land, go through the portal. Once back in the real world, speak with the NPCs to finish the quest.

Back to Walkthrough Index | Grahtwood Quests