Wrothgar Skyshards in Elder Scrolls Online (ESO) were added with the Orsinium DLC. This page shows the location of all 17 Skyshards 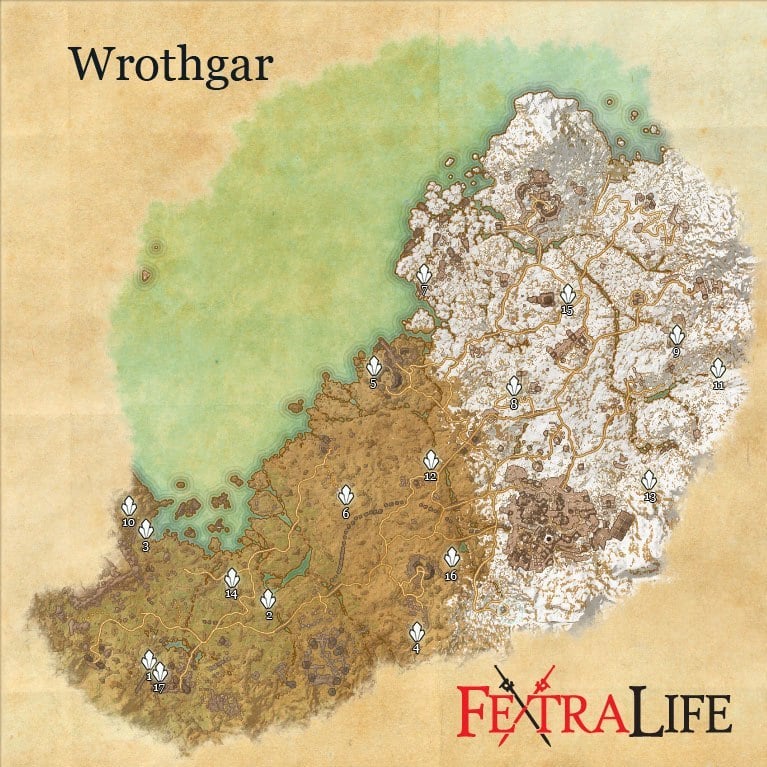 1. Beneath the ruined aqueduct. - Beneath the aqueduct in the very southwest of the map, south of the Siege Road Wayshrine.

2. West of the cliff jumper's falls. - Next to the waterfall just southeast of the Great Bay Wayshrine

3. Smuggled away in Shipwreck Cove. - To the left of the waterfall on the west side of the map (at the water's edge). It's just below Old Orsinium.

4. On a stonecutter's scaffold. - On a scaffold just south of Graystone Quarry

5. In the silver mine's, shadow. - Just northwest of Murkul Stronghold

6. Above the ancient barrow. - South of Exile's (Barrow on the hill). It's northwest of Trader's Road Wayshrine.

8. Atop the frozen waterfall. - Just west of the Forlorn Watchtower, northwest of Shatul Wayshrine.

9. Overlooking the ice-bound Centurion. - Just south of Nyzchaleft Falls by the pipe.

10. Caught in the webs of the old city. - In Old Orsinium (the very eaten most edge of the map that touches the water).

11. Washed down river by Dwarven boilers. - In Rkindaleft (the far eastern edge of the map, due east from the Shatul Wayshrine).

12. Surrounded by silver. - in Argent Mine (just northeast of Trader's Road Wayshrine).

13. An unusual egg for harpies. - In Coldperch Cavern (southeast of Shatul Wayshrine).

15. Kept as a prize in the cold Dwarf tomb. - In Zthenganaz (just southwest of Two Rivers Wayshrine).

17. Amidst the crumbling gargoyles. - In Watcher's Hold (south of Siege Road Wayshrine).