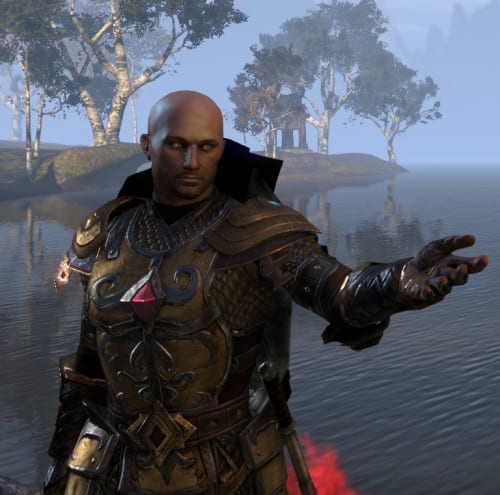 I use my Nightblade heavily focused on tanking. While it lacks the crowd control of the Dragonknight or Sorcerer and the area of effect of the Dragonknight and Templar, my build makes up for it in longevity and sustainability. Leeches and life taps keep some pressure off of my healer without being the resource hogs of the other classes' survivability skills. Ensuring that I don't lose focus by choosing between damage, aggro control, resource management, or survivability skills, my tanking bar skills perform multiple functions.

Let's face it though: not every fight requires a dedicated tank. Sure, most of the “trash” fights in dungeons have a hard-hitting baddie you should keep off the rest of the group. This bad guy isn't a boss, however, so it takes very little to control him. Normally I let my group members handle crowd control (not sure why so many think, "Crowd control is a tank's job!" Since when?)
Swapping out to my secondary bar, I get to enjoy some of my own AoE carnage. Nightblade may not have the AoEs of other classes but with a little work an AoE bar for these fights is not only viable but just plain fun! While secondary bar takes away my personal taps, the pressure that would add to my healer is negated by the sheer speed at which the enemies die.

With a full set of heavy armor and self-heals, soloing is fun! And just for that “traditional” Shadow Knight feeling, I'll often swap in Dark Shades. Manifestation of Terror and Turn Undead add in that fear ability for times when you get nostalgic for that old EQ1 fear kiting. With so few Assassination abilities used, I've yet to unlock Haste—but as much as I enjoy my current setup, it's going to have a tough time earning a spot on my bars. While I have several classes and multiple builds across many characters, this is by far my favorite! Currently....

Thanks to Kraive Moar for sending in this detailed build.