Precursor Maker is an Achievement in The Elder Scrolls Online. This page offers a complete guide on how to obtain the coveted reward.

Collect and install all of the parts necessary to reconstruct the Precursor factotum. (None of the pieces require any of the other DLCs to find.)

The first part, the Integral of Memory, is found in the Mnemonic Planisphere as part of the quest The Precursor, which begins in the Brass Fortress. You can find any of the other pieces before starting the quest, but you cannot install the items until you have completed the quest, so they will take up space in your backpack. (They are not considered quest items, so they will take up inventory space, but they cannot be placed in your bank or transferred to other characters in any way.)

This guide for the Precursor Maker achievement was published by Saturn on the official forums. Added here with permission!

The Precursor Maker is a collectible achievement in the DLC, Clockwork City. First off, a big thanks to my friend zeroIndex  for helping me locate some of the last few pieces, and spending several hours scouring the Clockwork City for the Integral of Reason with me.

NOTE: There is a bug that may occur if you do not activate the quest before collecting all of the parts. This bug will block you from completing the subsequent follow-up quest, which gives you the reward. (Thanks to Phage for reporting it)

I found the following 2014 thread by to be a great help when searching for potential Dwemer delves out in Tamriel: 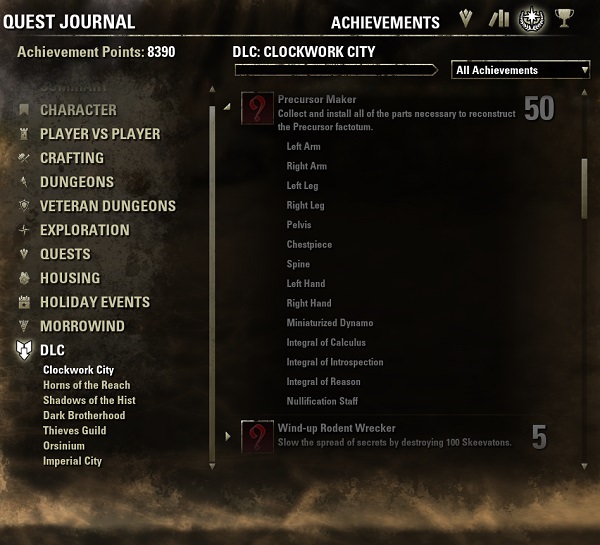 Hints / General Information about the Achievement:

Locations of each Collectible (ordered after the achievement):

The reward is literally the Precursor as a furnishing target dummy. He has ~300k health and makes a comment whenever you hit him, as well as when he is killed and respawns. As far as I am aware it is possible to obtain the Precursor dummy several times, if you were to do the achievement on multiple characters, so to those players wanting to assemble a robot army, your time is nigh! 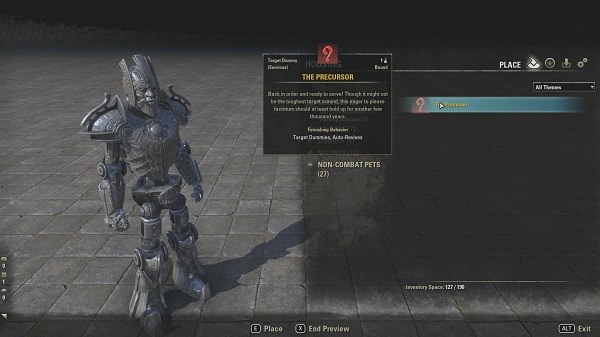