Skyshards in Gold Coast in Elder Scrolls Online. This page shows all skyshards in the Gold Coast region of the Dark Brotherhood DLC. 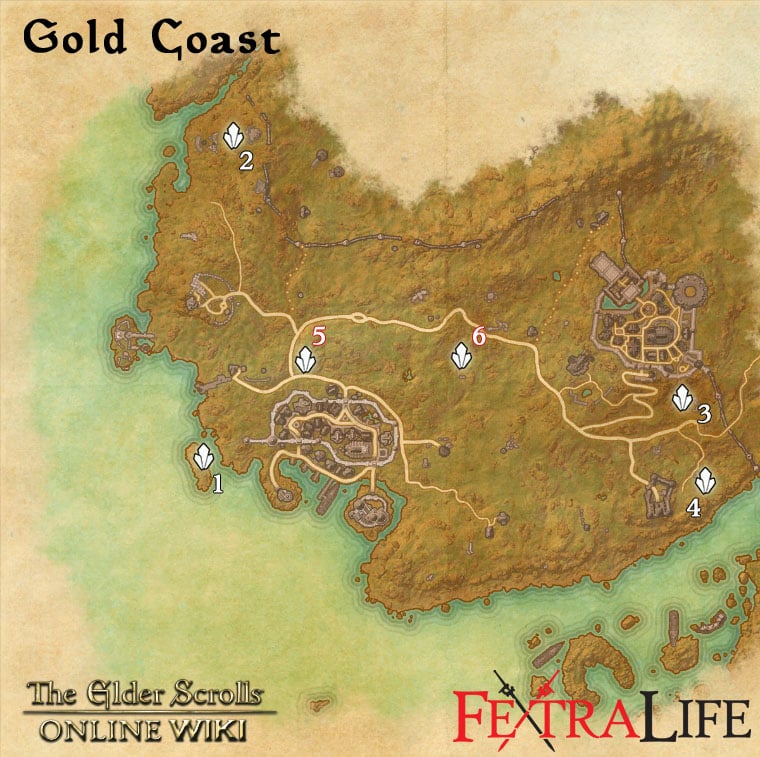 1 On a lonely isle staring out across the Abecean. - From the starting point of the area (Anvil), head outside and west and cross the deep water to a small island that has the skyshard.

2 Proudly displayed near the Caretaker's home - Follow the path north of Anvil until the northernmost area of the map, you'll find a grave area called Knightsgrave. The skyshard is in a ledge overlooking a wide view in between Knightsgrave and crafting station "Colovian Revolt Forge Yard"

3 Nestled in the arm of the Eastern Watchtower. - Head south from Kavatch towards the Varen's Wall Gatehouse marker. The skyshard is in a corner in a dilapidated watchtower, next to a troll.

4 Pulled from the ground in a strange harvest. - South and East from Skyshard 3, in a small farm to the east of Enclave of Hourglass. The skyshard is in the harvest grounds protected by two Thunderbugs.

5 Hidden away where only spelunkers will find it. - Hrota Cave: On a watery ledge in the middle-right corner of the dungeon.

6 A treasure of the Gold Coast, kept in a stolen vault. - Garlas Agea: On the first room to the right of the entrance after Razum-Dar.