Looking for a healer that can take a few punches (or giant claws, or fireballs) without crumpling? Player Ville Korpi sent in this Dragonknight build that boasts both survivability and great support for allies. Take a look at the details and you might just find your next favorite setup. 09.06.2014

"Our new featured build showcases a durable, fiery healer you won't want to mess with!"

During beta, I tried different builds and the one I liked most was a Dragonknight with a restoration staff. I'm an ESO adept but an MMO noob, and my build philosophy is to do whatever feels cool and interesting.

Fenemi is an Altmer Dragonknight healer who is also a woodworker, a smith, and a clothier. She is currently V1 and uses light armor with a few heavy armor pieces for extra durability. She usually wears crafted Song of Lamae set, but at the moment she simultaneously has a Magicka Furnace set. Though her build may be missing some of the advantages of Templar and Sorcerer healing, you give her a call if you need a healer that is sturdy and really hard to kill.

Dark Talons and Inhale work wonders in the middle of a group of mobs. Lava Whip is the weapon of choice against one enemy. I occasionally use a heavy attack to restore magicka. Unstoppable is the only stamina ability in this setup, so I can use it pretty often. Corrosive Armor (with both Battle Roar passives) is a great panic button, as it combines super strong damage mitigation with a heavy burst restore on all primary stats. 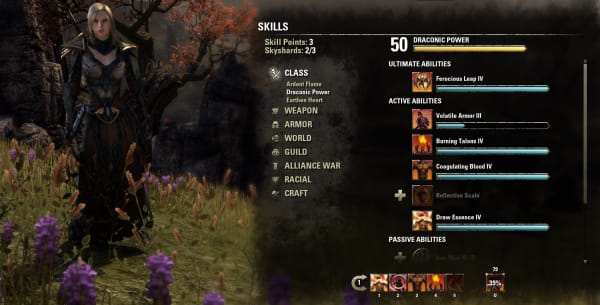 Morphed Regeneration is the best and most cost-effective heal in the game in my opinion. My choice is Mutagen. I keep that on all the time in group dungeons. When you add Igneous Shield and Combat Prayer to that at the start of the fight, tanks and dps will have a strong and safe start. I refresh Combat Prayer occasionally when I can get at least two group members in front of me, but I don't try to keep it on all the time. When someone's health gets low, I use Healing Ward followed by Combat Prayer.
In Cyrodiil, I use Mutagen less, but Igneous Shield and Combat Prayer are great because you can hit a lot of people with them. I also use Igneous Shield to give siege weapon users some peace of mind. Corrosive Armor, again, is the panic button.

I love the versatility as she is durable, can heal, and has strong AoE skills. The build's main weakness is in dealing damage to a strong single target (like bosses).


Thanks to Ville from Finland for sending in this build.