Anniversary Jubilee Event is a seasonal Holiday Event in The Elder Scrolls Online, used to celebrate the game's launch anniversary every April. 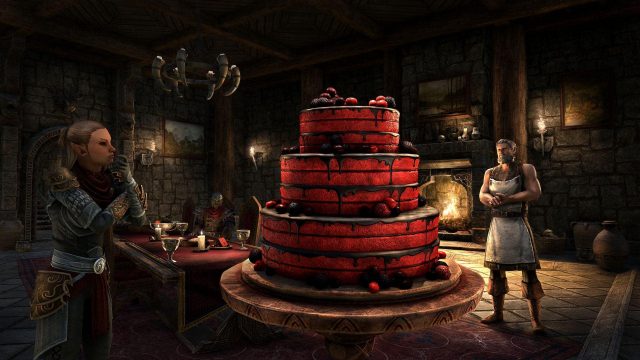 Join us in celebrating The Elder Scrolls Online's three-year anniversary by participating in our delicious special event for a host of unique bonuses and rewards.

To celebrate ESO's three-year milestone from its initial launch, the famous baker of delectable sweets, Chef Donolon, is returning to Tamriel once more. This time he has a new, even-more delicious treat to share on top of some additional rewards to boot!

The 6 Year Anniversary Event for the Elder Scrolls Online will take place from April 2nd 10:00AM EDT until April 14th 10:00AM EDT. To begin the celebration simply visit the Crown Store and pick up a free Jubilee Cake Voucher from the quest starter section. This will put you on the path to track down Chef Donolon who will ask you to collect some special ingredients to put together the new Jubilee Cake 2020 memento.

The Jubilee Anniversary Event is an annual holiday event which can help gain you some extra XP, so it’s a great time to level characters and earn those Champion Points. So put that Jubilee cake to good use by completing the dailies or even running a random dungeon, as the first one of the day grants a large amount of XP, top that with the anniversary event, meaning you can have your cake and eat it too!

This event also kicks off the chance to gain event tickets to put towards the next evolution of the Nascent Indrik, the Luminous Indrik.

During the event players can gain Anniversary Jubilee Gift Boxes by completing the game’s daily quests. These include:

This event will also be also a chance to snap up more Event Tickets by consuming the Jubilee Cake 2020, once a day. You will be given 3 tickets per day as well as a bonus 2 tickets for defeating any boss in ESO (these include Delve, World, Dungeons etc.) This means a max of 5 tickets can be earned per day. In total granting you 65 tickets if you take part each day. For the bonus tickets don’t forget to pick them up by looting the boss.

Locate the Impresario in Daggerfall in Glenumbra, Davon’s Watch in Stonefalls, and Vulkhel Guard in Auridon to spend you well earned tickets on the following items:

Anniversary Jubilee Event - How to begin

When you log in, find the acclaimed Chef in Vulkhel Guard, Daggerfall, or Davon's Watch and complete his appetizing quest Ache for Cake.

If you are having trouble finding him, check the Crown Store for a free Jubilee Cake Voucher that'll grant you a quest directing you to his location.

Once his quest is complete, the new 2nd Annual Jubilee Cake will be added to your Mementos collection.
You can use the cake to place it in the world. Once placed, anybody within your group can take a slice and (for the duration of the event) receive a two-hour 100% XP buff that stacks with any other active XP bonuses. Have a party!

In addition to the above, all daily and weekly quests completed during the anniversary event will grant you an Anniversary Jubilee Gift Box (along with their regular rewards). These gift boxes contain crafting materials, but they are also guaranteed to include at least one rare item such as Nirncrux, Motif chapters, Style items, Furniture crafting items, or more. Tasty!